Copyright: © 2022 Hirahara et al. This is an open access article distributed under the terms of the Creative Commons Attribution License (CC BY 3.0), which permits unrestricted use, distribution, and reproduction in any medium, provided the original author and source are credited.

Background: We assessed the relationship between preoperative prognostic nutritional index (PNI) and short- and long-term outcomes among gastric cancer patients because the clinical significance of PNI in these patients remains controversial.

Materials and Methods: We retrospectively reviewed the medical records of 434 consecutive patients who underwent curative laparoscopic gastrectomy for gastric cancer.

Cancer-associated malnutrition is a common and significant clinical issue because it is often unrecognized and undertreated. Gastric cancer patients are often malnourished at the time of diagnosis, which is related to impaired digestion, malabsorption, and bleeding and/or protein loss from the primary lesion [1, 2]. Recent studies have indicated that the preoperative nutritional and immunological statuses are not only associated with postoperative complications but also with long-term prognosis among cancer patients [3–5]. Moreover, several studies have demonstrated that postoperative complications adversely affect long-term survival [6–8]. Therefore, the preoperative assessment of nutritional status and preoperative nutritional management may help improve short-term outcome and long-term prognosis in gastric cancer patients who undergoing laparoscopic gastrectomy.

The prognostic nutrition index (PNI), which predicts the risk of postoperative complications, is calculated using serum albumin level and total number of lymphocytes [9]. Serum albumin has been reported to reflect nutrition and the immune response, being indicative of macrophage activation, tumor progression, and prognosis [10, 11]. Lymphocytes have been found to activate the adaptive immune system to stop cancer dispersion [12, 13]. Albumin level and lymphocyte count balance is closely linked to immune and nutritional status and is reported to affect the prognosis of cancer patients [10–13]. In addition, basic nutrition and systemic inflammation are also reported to be associated with the long-term prognosis of cancer patients [14–16]. However, the clinical significance of PNI in patients with gastric cancer remains controversial. Therefore, this study aimed to evaluate the relationship between preoperative nutrition and immunological status (using PNI) and short-term outcome and long-term prognosis, especially among stage-stratified gastric cancer patients undergoing curative gastrectomy.

Impact of PNI on OS among all patients

OS stratified according to PNI

The OS curve for the low PNI group was significantly inferior to that of the high PNI group; this was reflected in the significantly lower OS rate at five-years after surgery (51.1% vs. 91.2%, respectively; p < 0.001) (Figure 1). 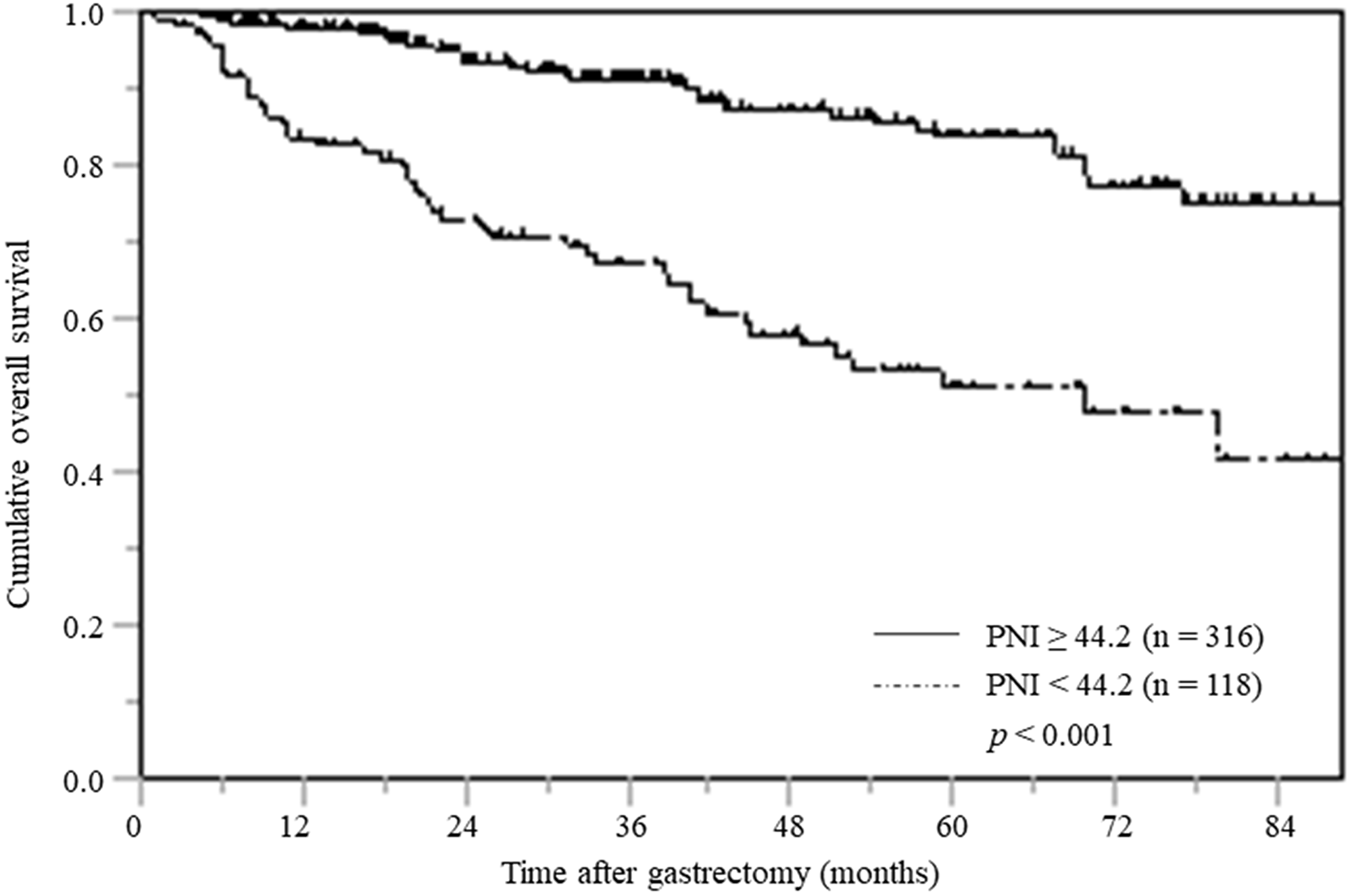 Figure 1: Overall survival based on PNI.

Table 4: Univariate and multivariate analyses to assess the risk factors for postoperative complications

Impact of postoperative complications on OS 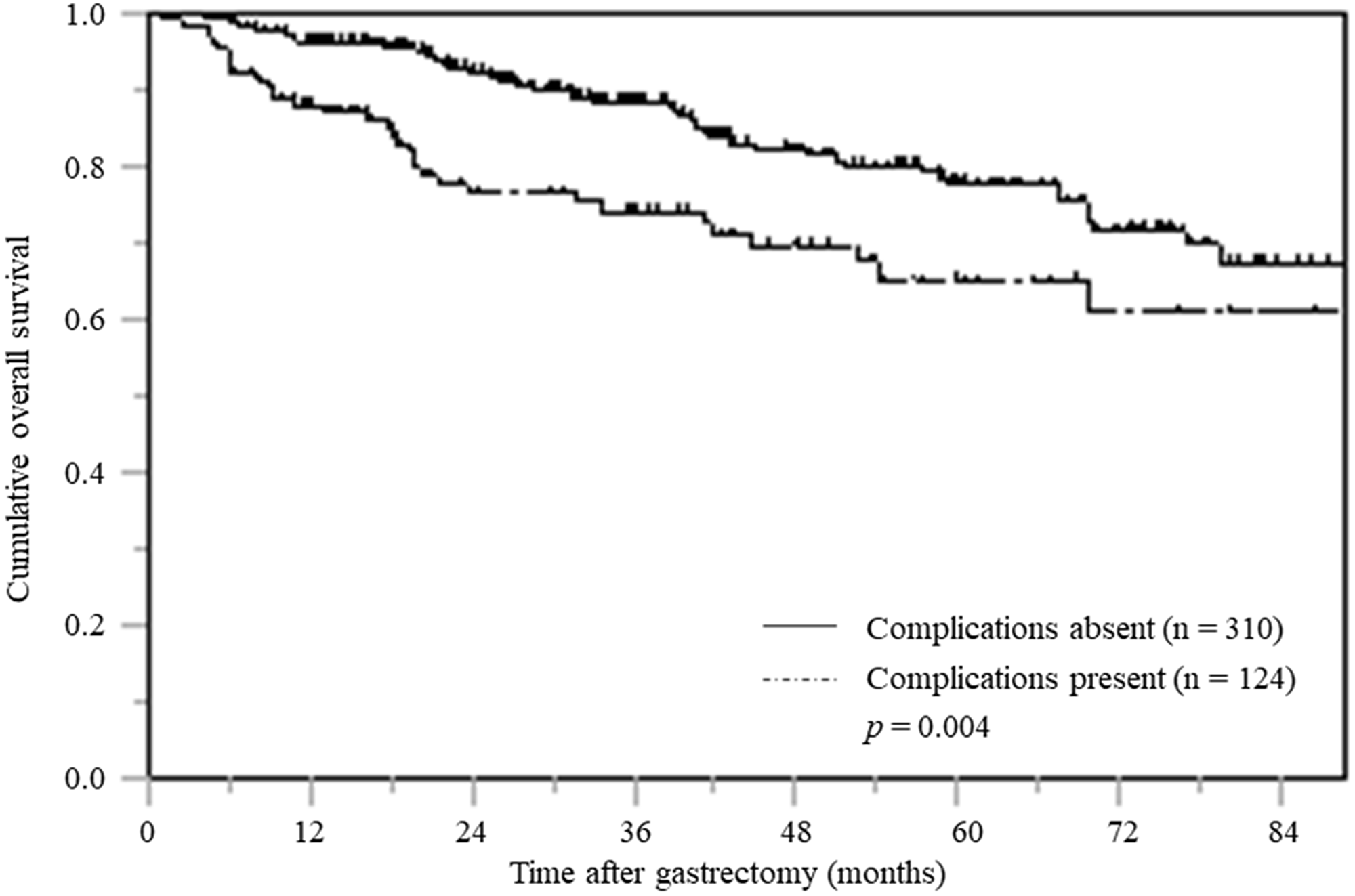 OS and complications stratified by PNI 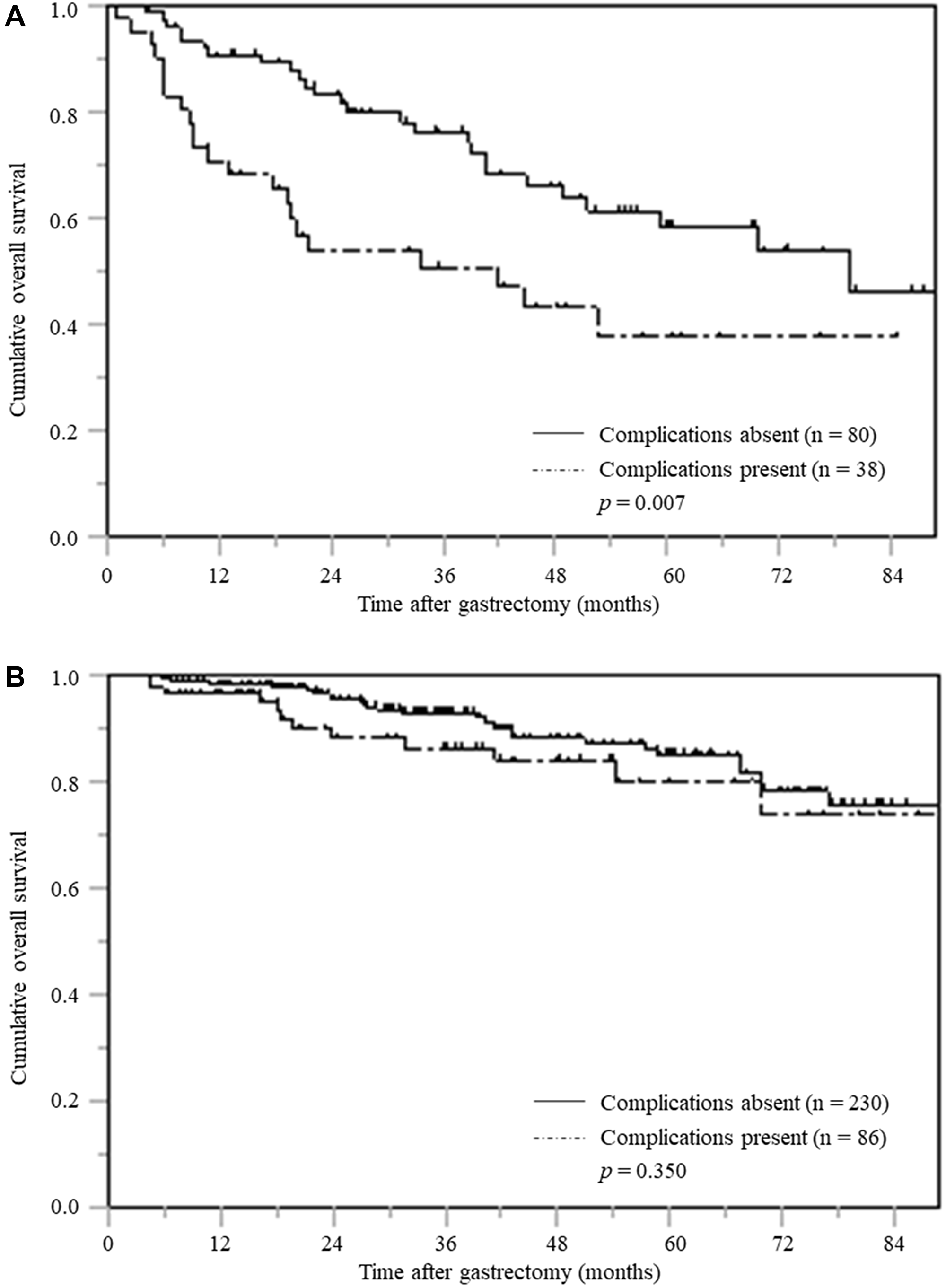 Figure 3: Overall survival based on postoperative complications stratified according to PNI. (A) Low PNI (B) High PNI.

However, in 316 patients with high PNI, there was no significant difference in OS between those with and without postoperative complications. (p = 0.350) (Figure 3B).

OS based on postoperative complications stratified by pTNM stage

However, among patients with pTNM stages II and III, the OS of those with and without postoperative complications did not differ significantly (Figure 4B and 4C). 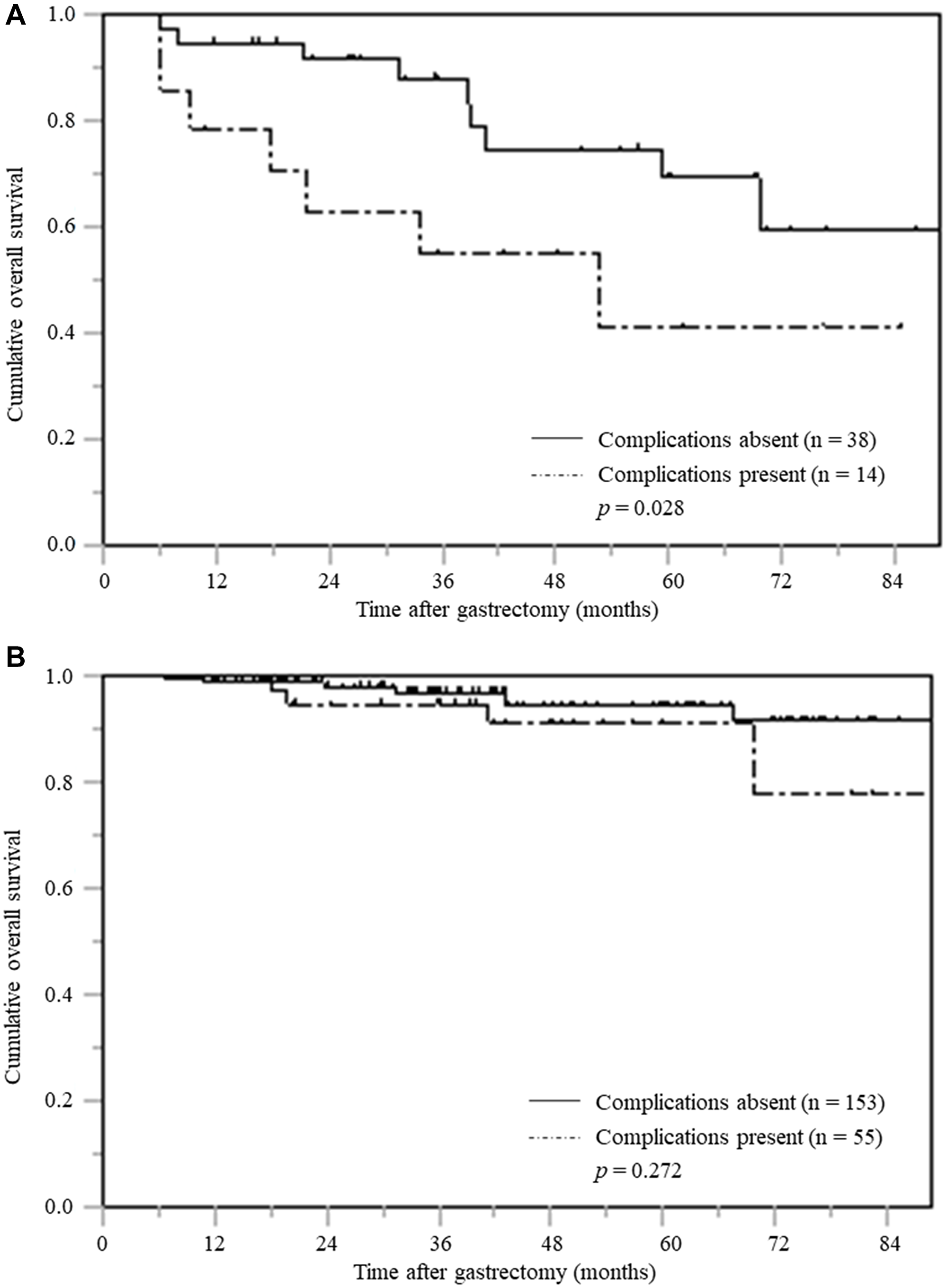 Figure 5: Overall survival based on postoperative complications stratified by PNI in patients with pTNM stage I. (A) Low PNI (B) High PNI. 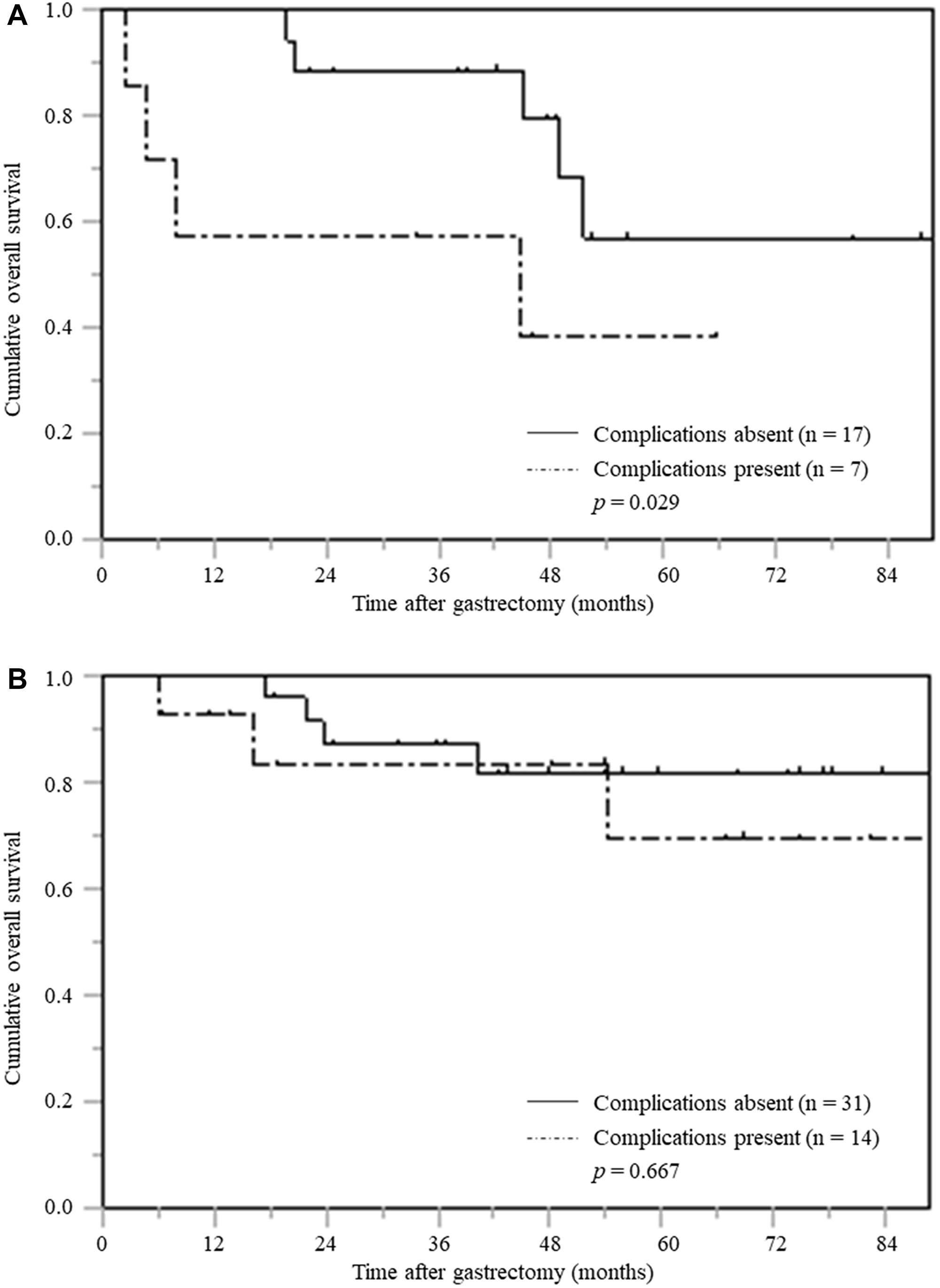 Figure 6: Overall survival based on postoperative complications stratified by PNI in patients with pTNM stage II. (A) Low PNI (B) High PNI.

Meanwhile, among pTNM stage III patients, there was no significant difference in OS between those with and without postoperative complications when stratified according to PNI value (Figure 7A and 7B). 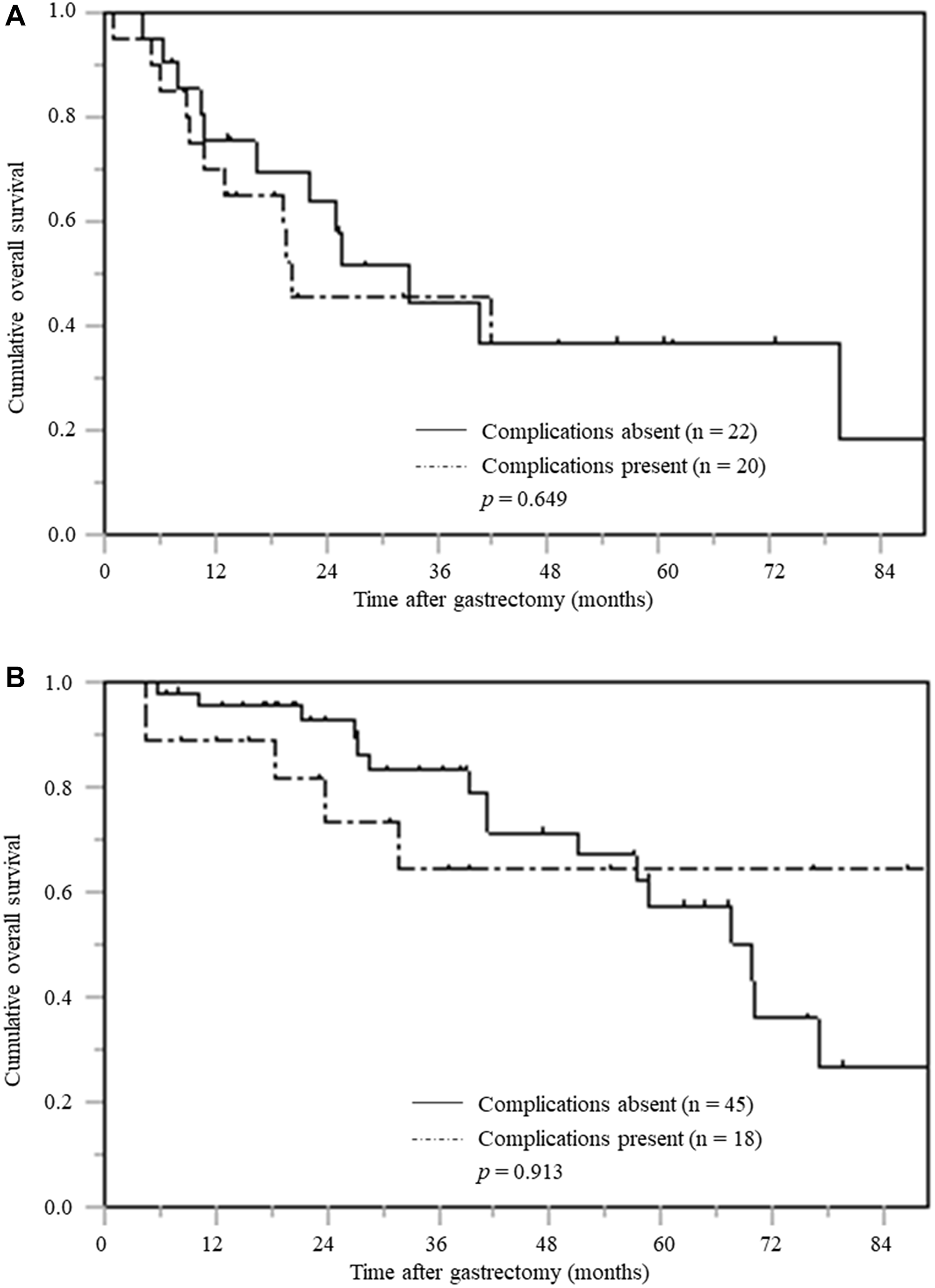 Figure 7: Overall survival based on postoperative complications stratified by PNI in patients with pTNM stage III. (A) Low PNI (B) High PNI.

In clinical practice, TNM staging alone cannot be used to predict clinical outcomes, since it only classifies patients according to postoperative pathological outcomes and does not include nutritional or inflammatory status [29, 30]. Thus, novel relevant prognostic predictors are needed to improve prognosis with individual treatment for gastric cancer. Recently, researchers have focused not only on tumor itself, but also on the tumor’s microenvironment, especially the immunonutrition and inflammatory status [31–33]. This study showed that PNI is important in assessing the risk of postoperative complications and is an independent predictor of long-term prognosis in gastric cancer patients. Considering the fact, we believe that PNI can effectively complement TNM staging and provide valuable information for individualized prognosis of gastric cancer patients.

While the current study has some advantages over previous reports, it has some potential limitations and caution should be exercised when interpreting the results. First, this was a single-institutional study with a relatively small number of patients and a relatively short follow-up period for evaluation of long-term prognosis. The follow-up period was sufficient to assess the outcome of postoperative complications, but further research is needed to investigate the impact of PNI on long-term prognosis. Second, immunonutritional parameters and systemic levels of inflammatory cytokines were not assessed. Third, the subgroup-derived evidence did not have sufficient statistical power to validate various conclusions because of the small number of patients. Fourth, the analysis did not include factors that could affect inflammation and nutritional markers, such as medication and comorbidity. Fifth, OS was evaluated in this study as it is considered the gold standard endpoint in cancer prognosis studies. However, disease-specific survival and recurrence-free survival data analysis would also provide to be useful. They were not analyzed.

We retrospectively investigated the medical records of 434 gastric cancer patients who undergoing curative laparoscopic gastrectomy between 2010 and 2018. The gastrectomy and lymphadenectomy were determined by the Japanese Gastric Cancer Treatment Guidelines (version 4) [34]. The pathological classification was judged based on the International Union Against Cancer (UICC) TNM 7th edition [35]. The ethics committee of Shimane university approved this study.

Postoperative complications of grade II or higher according to the Clavien-Dindo (CD) classification were retrospectively determined from the patients’ records [36]. Postoperative complications associated with gastric resection were defined as bleeding, anastomotic leakage and stenosis, pancreatic fistula, ascites, surgical site infection, abscess, pleural effusion, deep vein thrombosis/ pulmonary embolism, intestinal paralysis and any organ disease or infection. OS was calculated from the date of gastrectomy to the date of death due to any cause or the last follow-up.

The receiver operating characteristics (ROC) curve and area under curve (AUC) analyses were performed to determine the optimal cut-off value of PNI for OS. Based on this analysis, cut-off value of PNI was set at 44.2 (sensitivity, 55.7%; specificity, 79.8%; AUC = 0.701) (Figure 8). 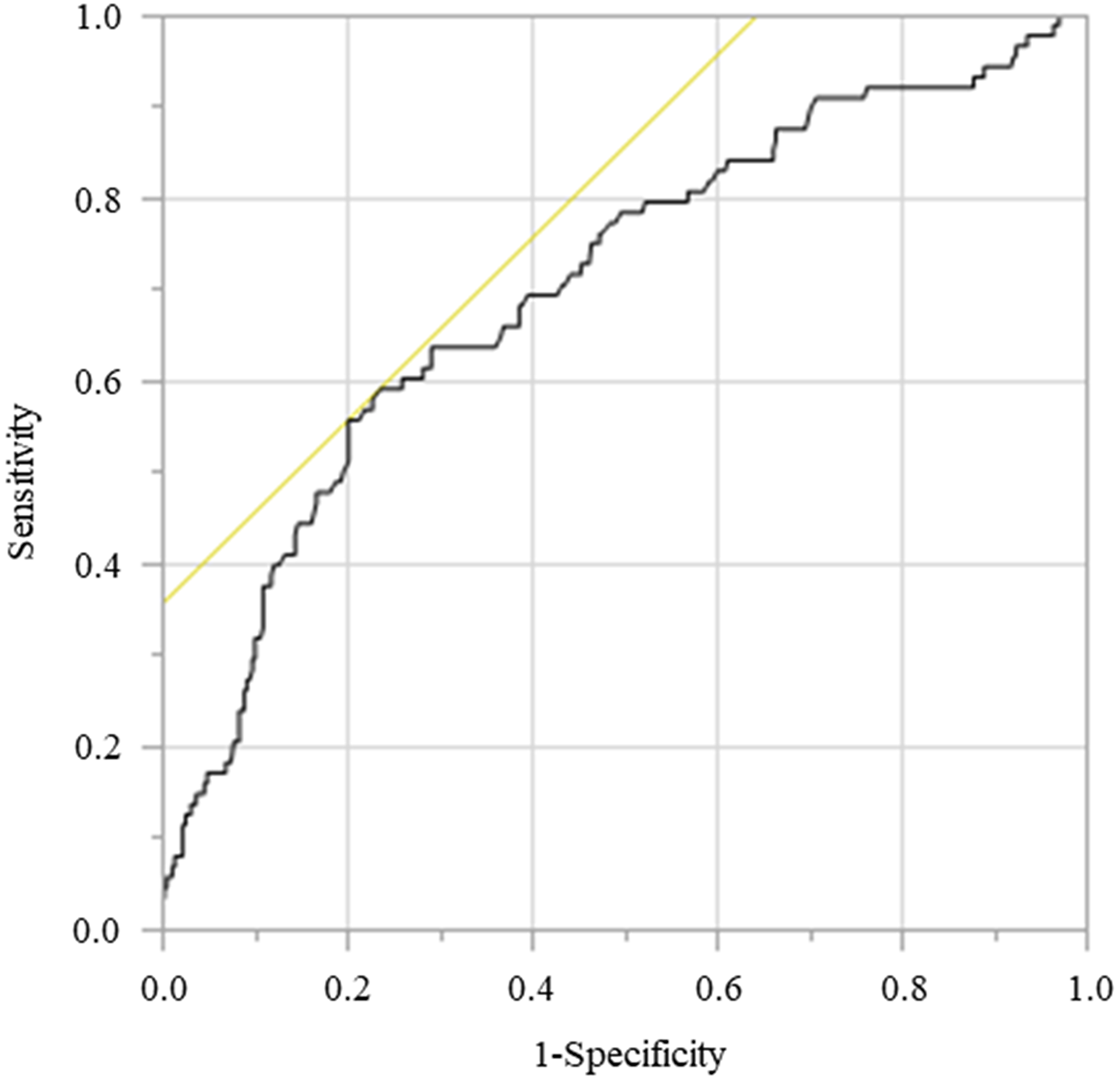 Figure 8: Receiver operating curve for OS was plotted to verify the optimum cut-off value of PNI.

Continuous variables are represented as median and range. Differences between groups were assessed using Student’s t-test. Differences between categorical variables were analyzed using the chi-square test. The OS was analyzed using the Kaplan-Meier method and the Log-rank test. In addition, a univariate analysis was performed to identify significantly relevant variables, and variables with a univariate p-value <0.05 were included in the subsequent multivariate analysis. The Cox proportional hazards model used HR and a 95% confidence interval (95% CI). Statistical analysis was performed using JMP software (version 16, USA), and p < 0.05 was judged to be a statistically significant difference.