Copyright: © 2021 Domènech et al. This is an open access article distributed under the terms of the Creative Commons Attribution License (CC BY 3.0), which permits unrestricted use, distribution, and reproduction in any medium, provided the original author and source are credited.

Cancer represents a heavy burden for society as a whole, with a high medical, economic, and psychosocial impact. Lung cancer is one of the most common cancers and has the highest death toll among them; 20% of all cancer-related deaths are attributed to lung cancer [1]. The vast majority of primary lung cancers are non-small cell lung cancer (NSCLC) [1]. NSCLCs can be classified at the molecular level according to the presence of oncogenic drivers that occur in genes crucial to tumor proliferation and survival. Several oncogenic drivers have been identified, which, in most cases, are mutually exclusive from one another [2]. However, only a fraction of them are druggable targets, also called actionable oncogenic drivers, for which targeted therapies are currently available. Among them, the most prevalent mutations in NSCLCs are seen in epidermal growth factor receptor (EGFR) (10–15%) followed by rearrangements in anaplastic lymphoma kinase (ALK) (3–7%) and ROS1 (1–2%) genes [2, 3]. Nevertheless, most NSCLC patients present either a non-actionable oncogenic driver or an oncogenic alteration that has not yet been characterized [4, 5].

On the other hand, the emergence of treatment resistance is unavoidable [6]. In cases treated with EGFR-targeting tyrosine kinase inhibitors (TKI) (e.g., gefitinib, erlotinib), a common resistance mechanism occurs through the activation of the MET proto-oncogene (MET), also considered an oncogenic driver [6, 7]. In NSCLC, MET can either be activated through MET gene amplification, with a prevalence of 1–5%, or exon 14 skipping mutations, occurring in around 3% of NSCLCs [7]. The receptor tyrosine kinase encoded by MET is c-MET, whose ligand is the hepatocyte growth factor. Excessive c-MET activation in advanced cancers can cause tumor cell proliferation, motility, migration, and invasion [8]. Therapies with c-MET-TKIs (e.g., crizotinib, cabozantinib) have proven beneficial in lung cancer patients with MET gene amplification, preventing tumor growth, proliferation, and dissemination [9]. In addition, cancer cells can also achieve resistance through immune evasion. Programmed cell death protein 1 (PD-1) is expressed in T, B, and NK cells and, through the interaction with its ligand (PD-L1), allows the cells expressing it to evade the immune response through different mechanisms, among which exhaustion, apoptosis, and anergy [10]. In several cancers, including lung cancer, this immune checkpoint can be hijacked by inducing PD-L1 expression on tumor cells, which avoids the response of the host’s immune system [11, 12]. Therefore, immunotherapy with anti-PD-1 (e.g., nivolumab, pembrolizumab) and anti-PD-L1 (e.g., atezolizumab, avelumab) agents has yielded positive results in patients with advanced NSCLC [13].

Several studies have proven that PD-L1 expression is correlated with wild-type EGFR [12, 14, 15], ROS1 rearrangement [14], and erlotinib-resistant NSCLC [6], while it is not associated with ALK mutations [16]. Besides, in some of these studies, MET gene amplification up-regulated PD-L1 expression, especially correlating with PD-L1 overexpression—considered as such for a tumor proportion score > 50% [6, 15]. However, to the best of our knowledge, no studies have been undertaken to explore the possible association of MET amplification and PD-L1 expression in advanced NSCLC patients presenting no other actionable oncogenic driver other than MET.

Therefore, the main aim of this study was to investigate the relation between MET gene amplification and PD-L1 expression in patients with advanced NSCLC and no other actionable oncogenic driver (i.e., EGFR, ALK, ROS1). We also analyzed the difference in PD-L1 expression according to sex, Eastern Cooperative Oncology Group Performance Status (PS), and smoking history of our studied population. Finally, we aimed to establish the effect of PD-L1 expression and MET gene amplification on the survival rates of our cohort. 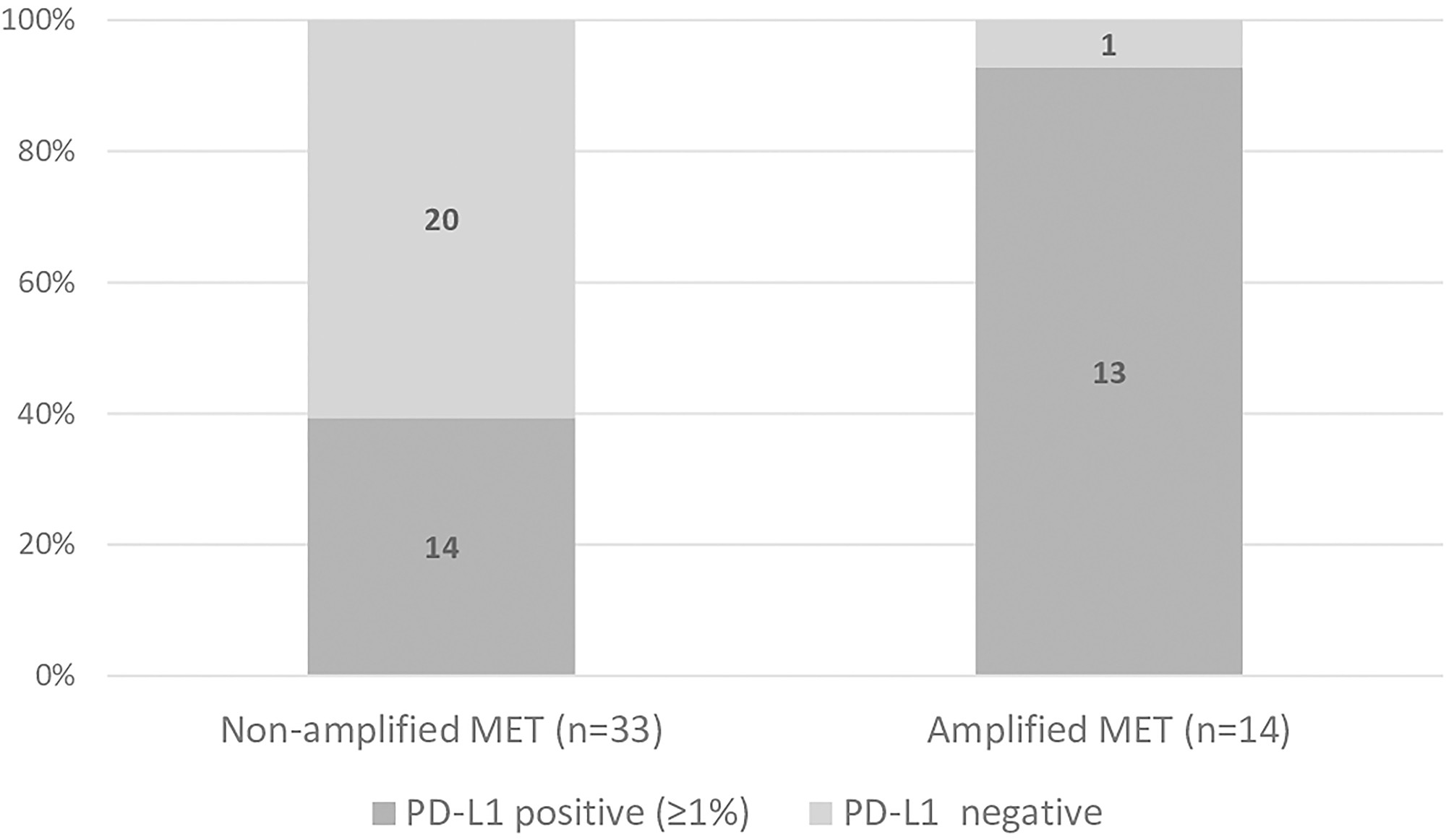 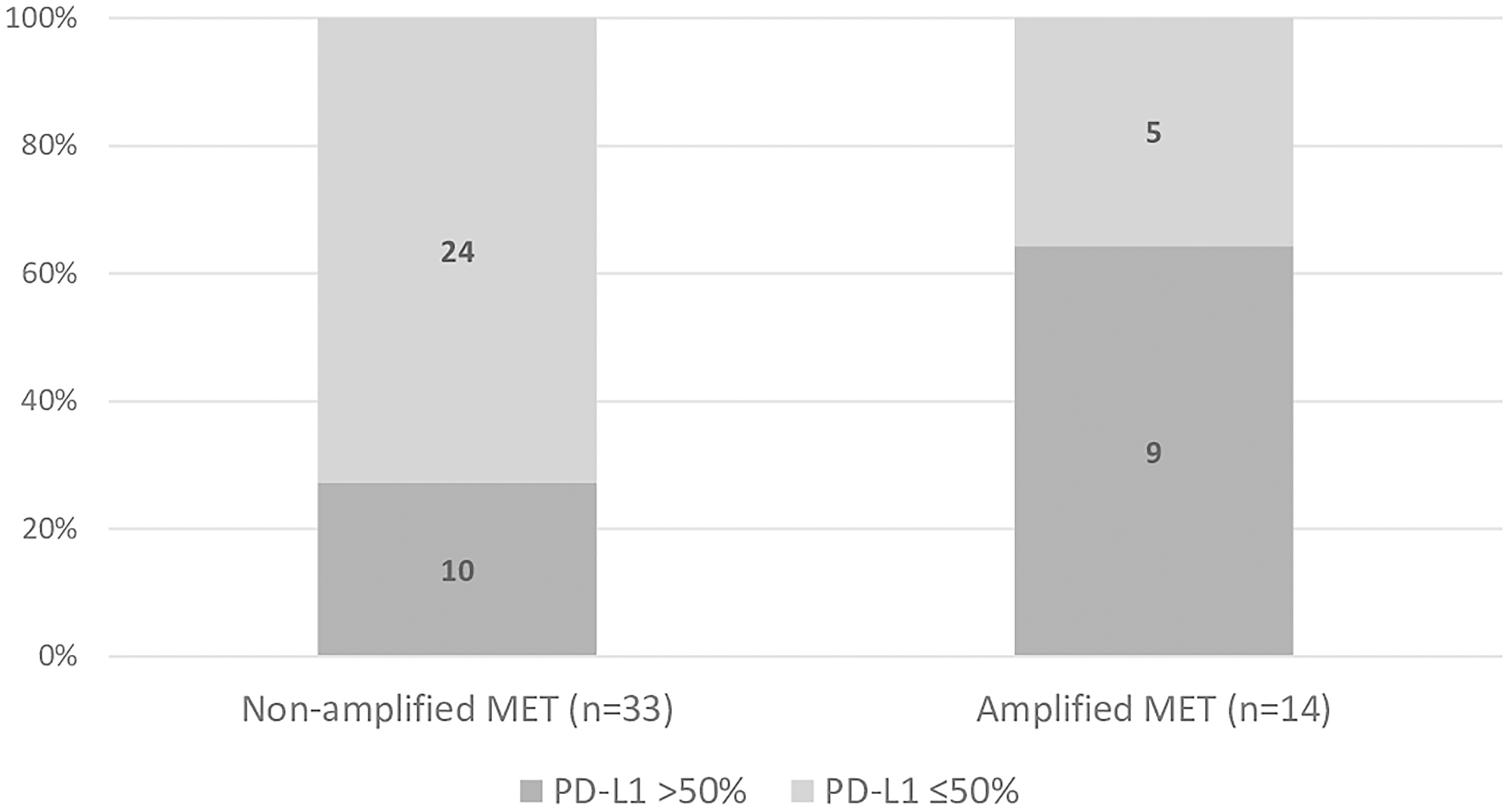 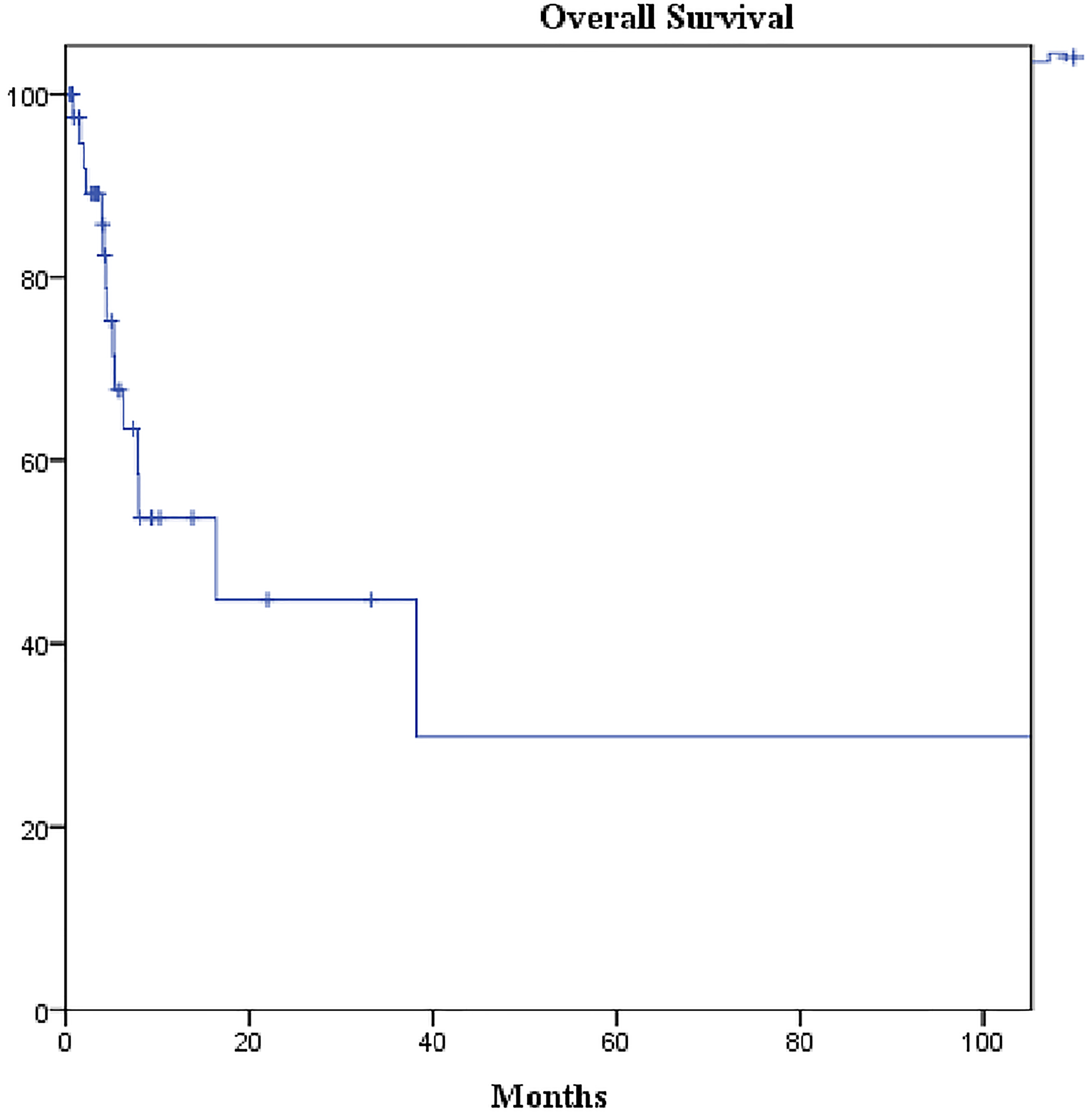 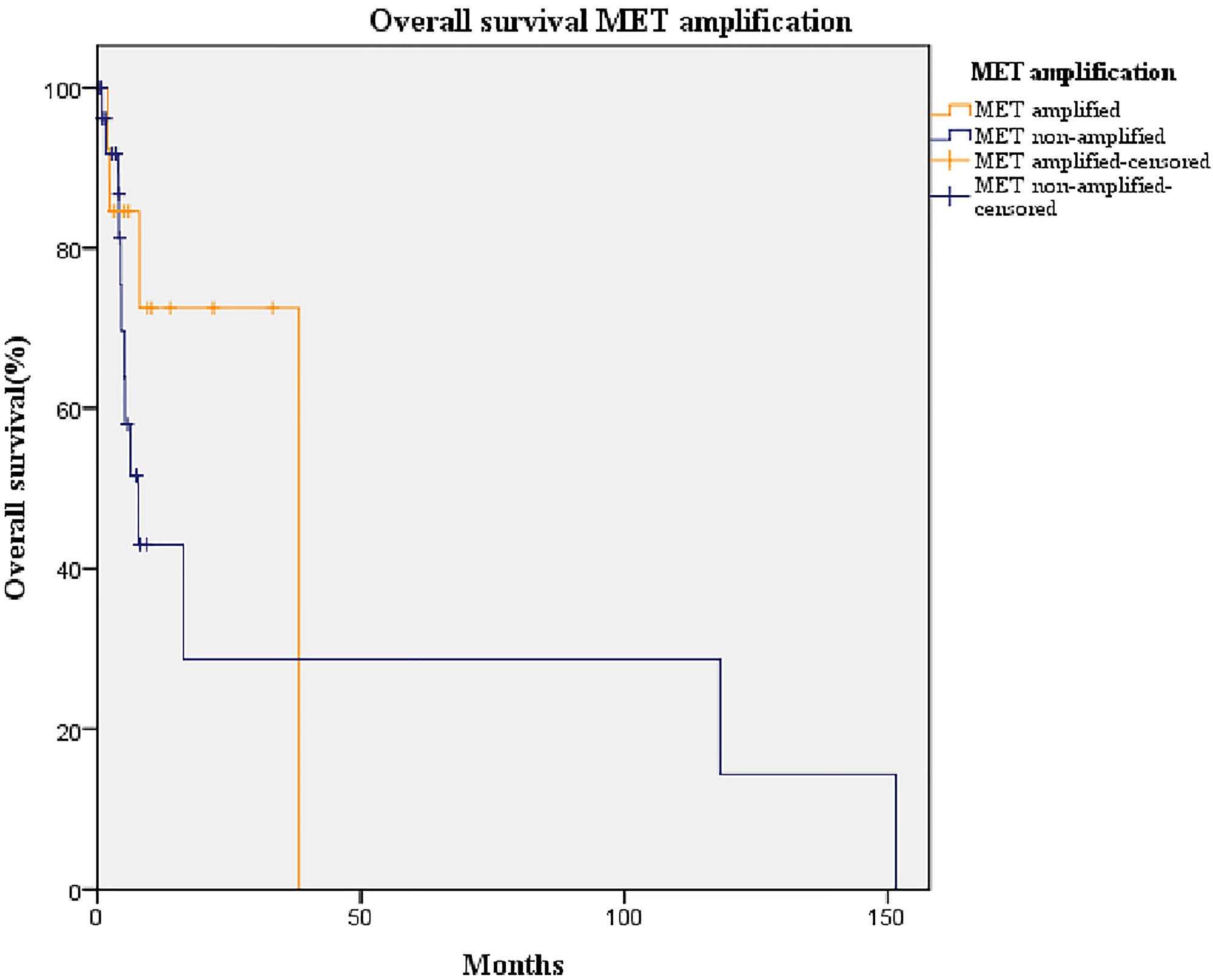 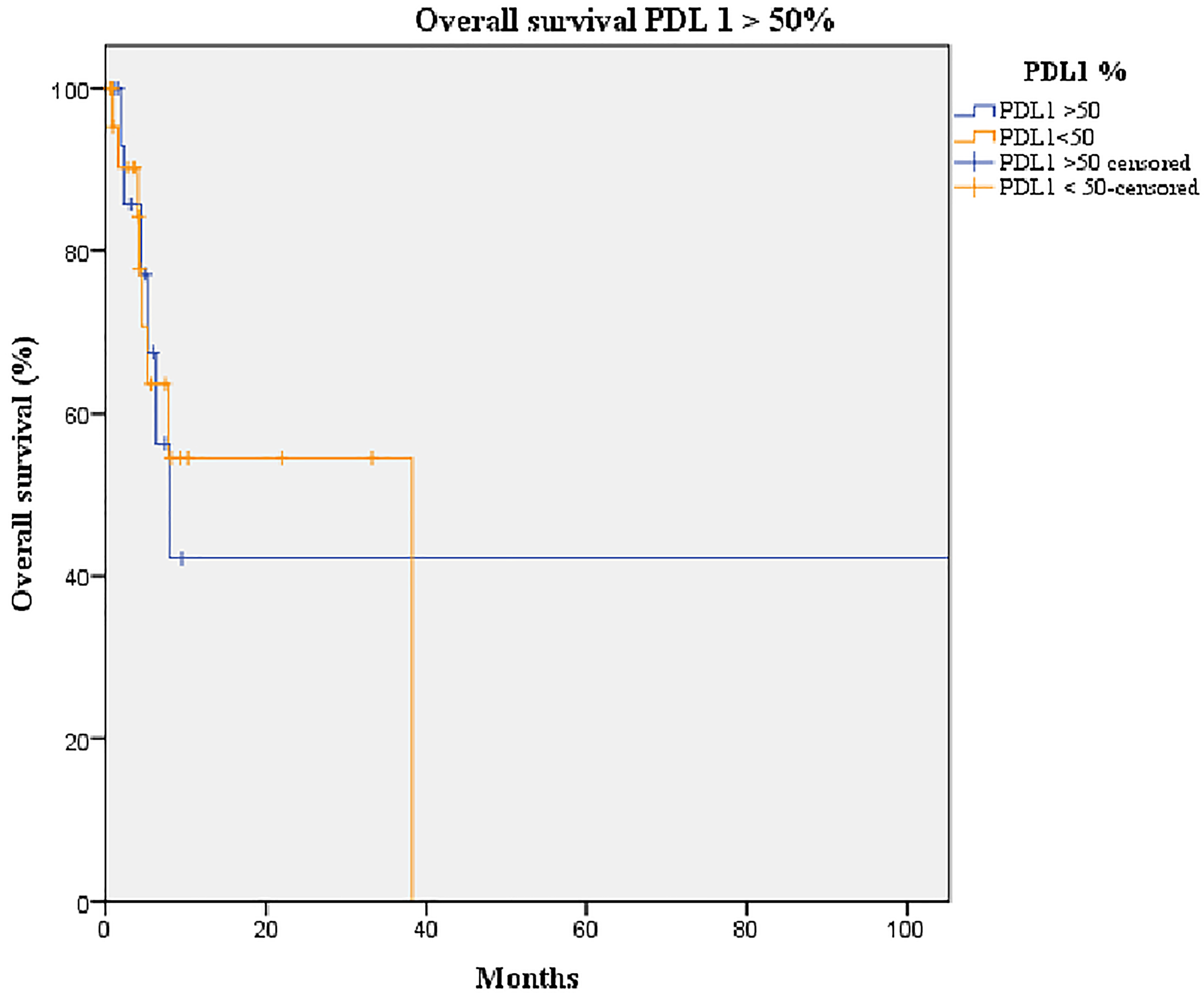 To the best of our knowledge, this was the first study to show a positive correlation between MET gene amplification and PD-L1 expression in patients with NSCLC and no other actionable oncogenic driver (i.e., EGFR, ALK, ROS1). Indeed, although the absolute numbers were the same, the proportion of patients expressing and overexpressing PD-L1 was higher among those with amplified MET.

Globally, more than 80% of lung cancers in men and almost 60% in women are caused by tobacco smoking [20]. Therefore, a correlation between smoking and PD-L1 expression is expected and has been repeatedly reported [21–23]. However, in our study, no correlation was found between PD-L1 expression and sex, smoking history, or PS. Interestingly, these results are in agreement with a large prospective study where none of these parameters had a significant impact on PD-L1 expression level [17] and with a previous meta-analysis in which only tumor differentiation showed a correlation with PD-L1 expression [10]. This could be explained, in our case, by the small size of our sample and the univariate analysis of data.

The OS of our cohort was in line with those reported for NSCLC patients with no actionable oncogenic driver [24]. However, MET amplification showed no statistically significant impact in OS, in contrast with previous studies [25–27]. This may be due to differences in the cut-off values used to define MET positivity or amplification, which lack consensus, and in the number of patients with stage IV tumors; in those patients, MET amplification did not further impact the OS [26]. However, in our study, the median OS of amplified (7.0 months) and non-amplified MET (38.0 months) groups displayed a non-negligible difference, but the small size of our sample precluded statistical confirmation of this result. Although PD-L1 has been found to be a poor prognosis factor [10, 16], we found that PD-L1 expression was not correlated with OS, as previously reported [28–30]. This could be explained, again, by the influence of the patients’ tumor stages and their ethnicity; no influence of PD-L1 expression has been reported on the OS of patients with stage IV tumors and was only an indicator of poor prognosis in Asian populations but not in non-Asians [16].

The main strength of our study was the homogeneity of the sample, which allowed, for the first time, to study the correlation between PD-L1 expression and MET gene amplification in patients with advanced NSCLC and no other actionable oncogenic driver. However, we were limited by the small sample size available and the inherent constraints of a retrospective study. In addition, the absence of a general consensus on cut-off values for MET amplification compelled us to use arbitrary ones. Therefore, we urge the community to arrive at this most needed consensus and to undertake prospective and large studies to validate or refute the results here described.

This was a retrospective observational study carried with data recorded in the Spanish Thoracic Tumor Registry (TTR), a National Registry of lung cancer cases managed and sponsored by the Spanish Lung Cancer Group (SLCG) (Grupo Español de Cáncer de Pulmón). The SLCG is an independent cooperative group formed mostly by oncologists and counting more than 500 members. In 2015, the SLCG decided to start a nationwide multicenter epidemiological study aimed at ascertaining the characteristics of lung cancer cases, their treatments, and survival, in an effort to offset the existing lack of information caused by the absence of a cancer registry with national coverage. Current regional registries barely cover 30% of the Spanish population and only exist in some particular regions. The TTR was opened to all Spanish hospitals and the first patient was enrolled in August 2016. The recruitment is still ongoing with more than 75 hospitals taking part. The methodology group of the SLCG designed specifically an electronic questionnaire to be used by the TTR. The information from all participants was entered through an electronic questionnaire by clinicians. The questionnaire had different sections: 1) demographic data (gender, age, etc.); 2) detailed history of tobacco use; 3) lung cancer characteristics at diagnosis (including a full list of possible symptoms); 4) all treatments received (with detailed information on each); 5) presence of specific mutations in driver genes at diagnosis; 6) disease progression; and 7) survival data.

This study used data from patients admitted to the Catalan Institute of Oncology Badalona Germans Trias i Pujol Hospital between July 2015 and February 2019. We collected data recorded in the Spanish TTR from patients of our center. We included data from patients with advanced NSCLC and whose MET expression had been analyzed and showed no other mutation on relevant genes (i.e., EGFR, ALK, ROS1).

The TTR has been approved by the Clinical Research Ethics Committee of Puerta de Hierro University Hospital.

We evaluated MET amplification by fluorescence in situ hybridization (FISH) using the Zyto Light® SPEC MET/CEN 7 Dual Color Probe. Briefly, we deparaffinized 4-μm-thick paraffin-embedded tissue sections and processed them with the Histology FISH Accessory Kit (Dako). After pretreatment and enzymatic digestion according to the manufacturer’s instructions, we codenatured slides for 4 min at 85°C and hybridized them overnight at 37°C on a Hybridizer (Dako). Following hybridization, we removed coverslips and washed slides at 65°C for 2 min in 2 X SSC/0.3% Tween-20. After dehydration in a graded ethanol series, we counterstained samples with fluorescence mounting medium containing 4′,6-diamidino-2-phenylindole (DAPI). Finally, we scored hybridization signals in at least 20 non-overlapping nuclei.

No consensus exists on the most appropriate diagnostic cut-off point for MET amplification. Several approaches based either on gene copy number, the ratio of MET to chromosome enumerating probe against chromosome 7 (CEP7), or a combination thereof have been proposed [31]. In our study, we applied the criteria of Noonan et al. [32], who categorized samples in four groups conforming to MET/CEP7 ratios: not positive (< 1.8), low (≥ 1.8 to ≤ 2.2), intermediate (> 2.2 to < 5) and high amplified (≥ 5). Accordingly, we classified our samples with MET/CEP7 ratio ≤ 2.2 (not positive or low) as non-amplified MET and those with MET/CEP7 ratio > 2.2 (intermediate or high) as amplified MET.

We processed tissue slides in a BenchMark ULTRA platform instrument (Ventana Medical Systems, Roche, Tucson, AZ, USA) and stained them with SP263 antibody, which we prediluted according to the manufacturer’s instructions. Following the established recommendations, we quantified the percentage of cells with membrane positivity (partial or complete expression) for each tumor. We did not assess tumor necrosis areas and discarded cases in which at least 50 viable cells were not available [33]. We determined the tumor proportion score by calculating the percentage of tumor cells membrane staining at any intensity. We considered PD-L1 expression in tumor cells positive if ≥ 1% of tumor cells had membranous staining of any intensity and high if > 50%.

We described categorical variables as absolute frequencies and percentages and continuous variables as median and ranges. We compared categorical variables using the chi-square test. We calculated OS from the date of diagnosis to the date of last follow-up or death. We conducted survival analysis with the Kaplan-Meier method and we compared differences among groups and subgroups with the log-rank test. We set the statistical significance level at p < 0.05.

EC handled the conceptualization and methodology; MD handled analysis; The others handled the validation.