Mitochondria are double membrane-bound organelles found in most eukaryotic cells, where they play essential and diverse roles in cellular physiology, including growth, division, energy metabolism, and apoptosis [1–3]. Mitochondrial morphology is regulated by the balance of two continuous antagonistic processes: fusion and fission [4]. Under physiological conditions, mitochondria are elongated and filamentous, but they undergo extensive fragmentation during apoptosis [5]. Apoptotic fission is associated with remodeling of the cristae, which is characterized by the opening of their tubular junction. This process results in the complete release of proapoptotic factors, such as cytochrome c, which is required in the cytosol for the activation of downstream effector caspases [6]. A number of evidence revealed that dynamin-related protein 1 (Drp1) participates in mitochondrial fission. Drp1 is a GTPase that causes scission of the mitochondrial outer membrane, resulting in fission of mitochondrial tubules into fragments [7, 8]. Drp1 translocates from the cytosol to the mitochondria and mediates mitochondrial fission prior to caspase activation and apoptosis [9]. Drp1 is responsible for cytochrome c release and caspase activation [10]. However, the mechanism by which Drp1 is recruited to mitochondria remains unresolved.

Cofilin is a member of the ADF/cofilin family of small actin-binding proteins found in all eukaryotic cells, and it regulates actin dynamics by increasing the rate of actin depolymerization and facilitating actin filament turnover [11]. Cofilin plays an essential role in regulation of the mitochondrial apoptosis [12]. Recent findings indicate that after induction of apoptosis, cofilin translocates from the cytosol to the mitochondria prior to the release of cytochrome c [12, 13]. Knockdown of cofilin results in the inhibition of both cytochrome c release and of apoptosis [12]. In addition, recent evidence has implicated cofilin in regulation of mitochondrial dynamics and functions [13]. Cofilin functions as a biosensor that integrates cytoskeletal regulation with mitochondrial function. The results of another study indicated that under certain cellular conditions cofilin might directly or indirectly associate with mitochondria and modulate mitochondrial functions [14]. However, the mechanism by which cofilin affects mitochondrial dynamics and functions, and is responsible for mitochondrial apoptosis remains unknown.

Rho-associated coiled coil-containing protein kinase 1 (ROCK1) belongs to a family of serine/threonine kinases that are activated by Rho GTPases or caspase-3 via cleavage the C-terminal auto-inhibitory domain away from the kinase active site [15, 16]. Recent studies have shown that ROCK1 plays an important role in regulation of apoptosis in various cell types and animal disease models [16–18]. It has been shown that ROCK1 plays a critical role in mitochondrial fission, which results in recruitment of dynamin-related protein-1 (Drp1) to the mitochondria [19]. ROCK1 has also been shown to play a critical role in dephosphorylation and mitochondrial translocation of cofilin [17]. However, the precise mechanism by which ROCK1 regulates the phosphorylation status of Drp1 and cofilin during mitochondrial fission and apoptosis remains unclear.

The natural compound 4-methylthiobutyl isothiocyanate (erucin) is found in consumable cruciferous vegetables and possesses chemopreventive and chemotherapeutic activities [20]. Increasing evidence suggests that erucin exerts its antiproliferative effects by inducing cell cycle arrest and apoptosis in various cancer cell lines in vitro [21, 22] and in tumor xenograft models in vivo [23]. The results of recent studies suggest that a mitochondrion-dependent pathway may play an important role in erucin-mediated apoptosis [24]. However, the molecular mechanisms by which erucin regulates the mitochondrial apoptosis pathway in human breast cancer cells has not yet been explored. Here, we report for the first time that erucin potently induced mitochondrial fission and apoptosis through mitochondrial translocation and interaction of cofilin and Drp1. Importantly, Rho-associated coiled coil-containing protein kinase 1 (ROCK1) was found to play an important role in regulating the dephosphorylation of cofilin and Drp1. Our in vivo findings indicated that the erucin-mediated inhibitory effects on tumor growth in a MDA-MB-231 xenograft mouse model was also associated with dephosphorylation and mitochondrial translocation of cofilin and Drp1, mitochondrial fission, and apoptosis. These findings provide a novel mechanistic basis for the application of erucin in the treatment of breast cancer.

First, we examined the effects of erucin on apoptosis and mitochondrial injury in human breast cancer MDA-MB-231 and MCF-7 cells. Flow cytometry analysis revealed that exposure of MDA-MB-231 and MCF-7 cells to erucin resulted in a significant increase in mitochondrial injury (loss of △Ψm) and apoptosis in dose- and time-dependent manners (Fig. 1A and 1B). Consistent with these findings, the same erucin concentrations and exposure intervals caused cleavage and activation of caspase 9 and caspase 3 and degradation of PARP. These events were also accompanied by significant increases in the release of cytochrome c from the mitochondria into the cytosol (Fig. 1C and 1D). Immunofluorescence assay also revealed that cytochrome c was release from mitochondria to cytosol after erucin treatment (Fig. 1E and 1F). 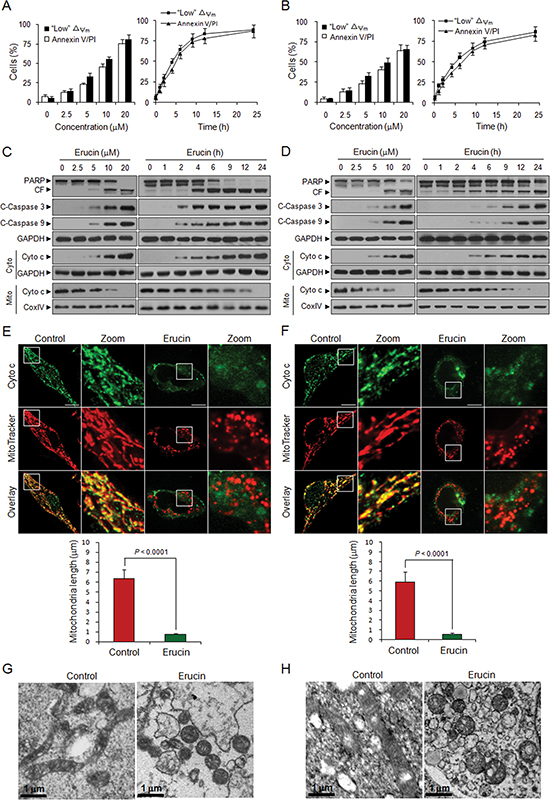 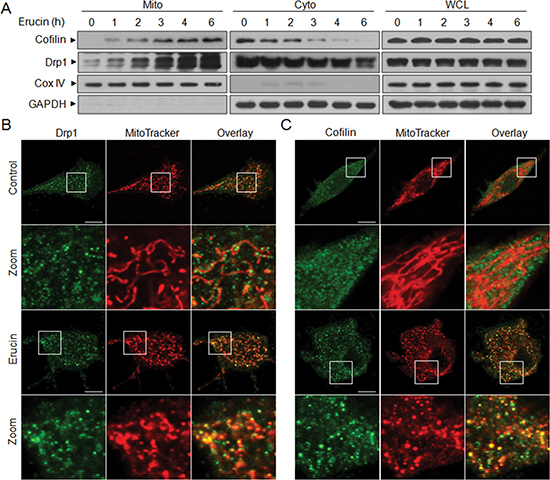 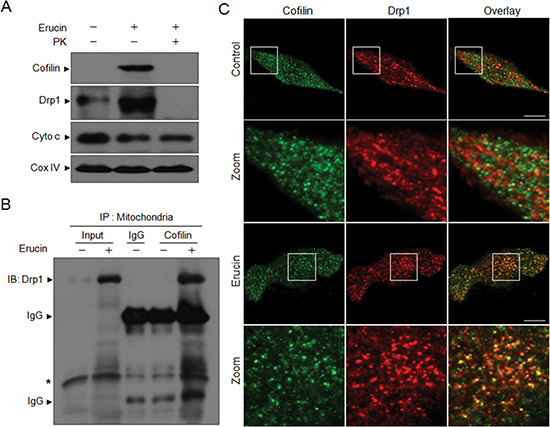 Figure 3: Erucin induces the interaction and colocalization of cofilin and Drp1 at the outer mitochondrial membrane. (A) MDA-MB-231 cells were treated with 20 μM erucin for 6 h, mitochondria were purified and incubated with 10 ng/ml proteinase K on ice for 10 minutes, then centrifuged at 17,000g for 15 minutes. After washing, pellets were lysed in 2% SDS buffer and determined by immunoblotting. (B) Mitochondrial fractions were prepared and subjected to immunoprecipitation using anti-cofilin antibody, and the associated Drp1 were determined using immunoblotting. IgG represents the heavy (approximately 57 kDa) or the light (approximately 25 kDa) chain of cofilin antibody. Asterisk represents nonspecific band. (C) Cells were treated with 20 μM erucin for 6 h, stained with cofilin (Alexa Fluor 488, green) and Drp1 (Alexa Fluor 647, red) and evaluated by confocal microscopy. Scale bar represents 10 μm. 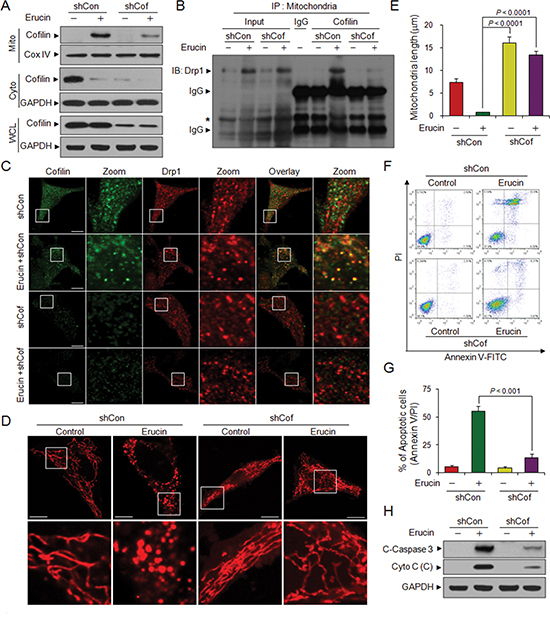 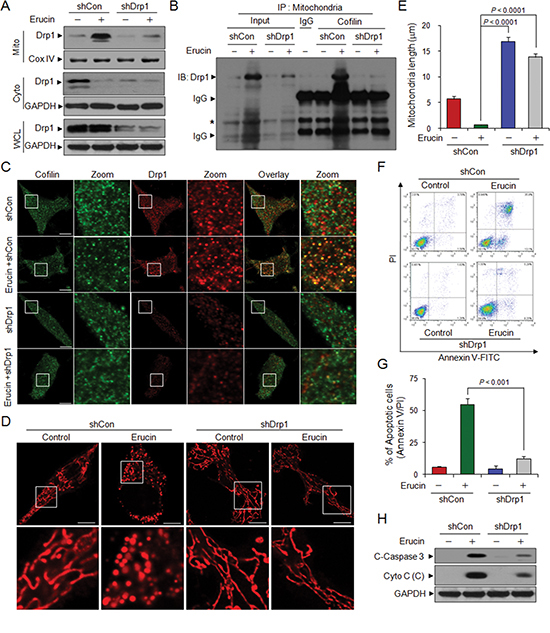 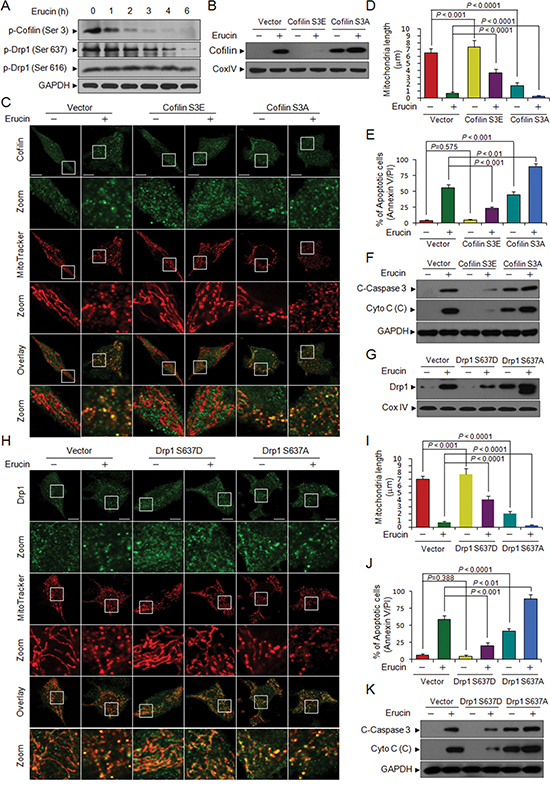 ROCK1 is involved in erucin-induced dephosphorylation and mitochondrial translocation of cofilin and Drp1, mitochondrial fission, and apoptosis

It has been shown that cofilin can be dephosphorylated by the phosphatases PP1 and PP2A, which are regulated by the ROCK1 signaling pathway [17, 32–35], and phosphorylated by LIM kinase, which is also regulated by ROCK1 [36–38]. ROCK1 is involved in the regulation of Drp1 phosphorylation status and promote Drp1 translocation to mitochondria, leading to mitochondrial fission [19]. We next examined whether erucin affects the expression of ROCK1, PP1, PP2A, LIMK1, LIMK2 and phospho-LIMK1(Thr508)/LIMK2(Thr505). Treating cells with erucin resulted in a marked decrease in the levels of ROCK1 and increased cleavage of ROCK1 in a time-dependent manner (Fig. 7A). Exposure of cells to erucin also resulted in marked increase in levels of PP1 and PP2A in time-dependent manners. However, the levels of LIMK1, LIMK2 and phospho-LIMK1(Thr508)/LIMK2(Thr505) were not altered by erucin treatment (Supplementary Fig. S1).

To determine whether our in vitro findings could be replicated in vivo, nude mice were inoculated subcutaneously with MDA-MB-231 cells followed by injections with vehicle or erucin (50 mg/kg, i.p.) for 50 days starting one week after tumor inoculation. Treatment with erucin resulted in a significant increase in survival compared with untreated controls (P < 0.001) (Fig. 8A). Treatment with erucin resulted in a significant suppression of tumor growth after 3 weeks of drug exposure (P < 0.01 or P < 0.0001 vs vehicle control) (Fig. 8B). However, there were no significant changes in body weight (Fig. 8C) or other signs of potential toxicity such as agitation, impaired movement and posture, indigestion or diarrhea. 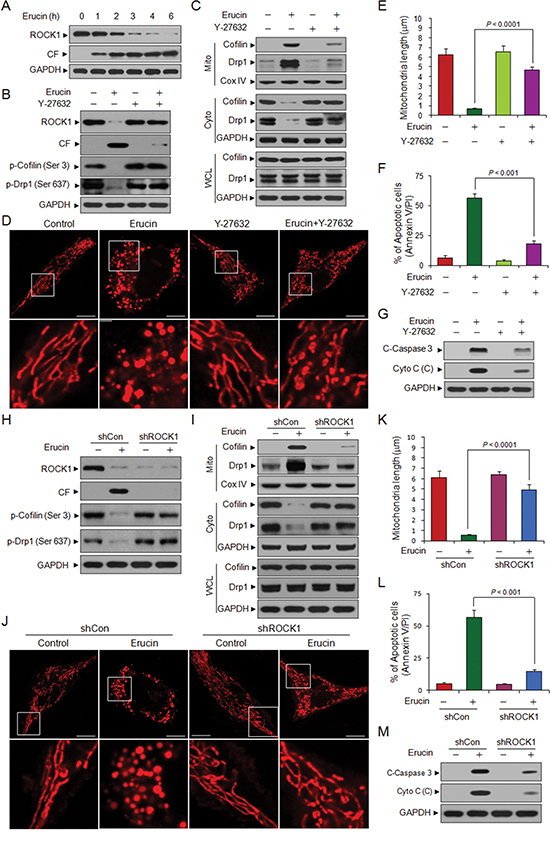 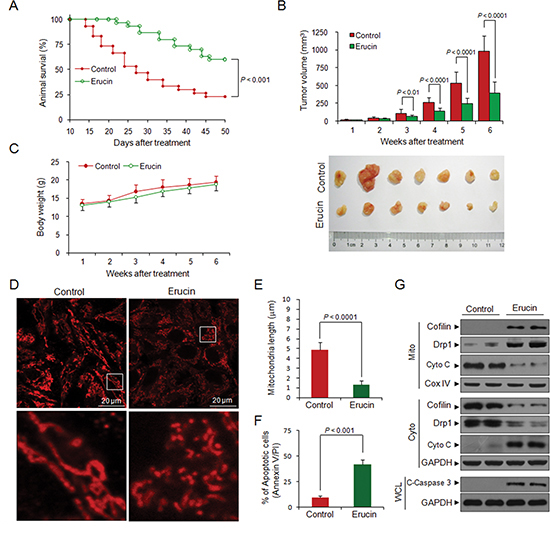 In summary, the present findings demonstrate for the first time that erucin induces mitochondrial fission and apoptosis in breast cancer cells through mitochondrial translocation and interaction of cofilin and Drp1. Collectively, these observations suggest a hierarchy of events in erucin-induced apoptosis in which ROCK1 activation represents the primary event, leading to the dephosphorylation of cofilin (Ser 3) and Drp1 (Ser 637), which are translocated from the cytosol to the mitochondria, culminating in mitochondrial fission, cytochrome c release and apoptosis.

MDA-MB-231 and MCF-7 cells were purchased from the American Type Culture Collection, who authenticates cell lines with short tandem repeat profiling and monitoring cell morphology. Cells were maintained in Dulbecco’s Modified Eagle Medium (DMEM) containing 10% FBS at 37°C in 5% CO2 and passaged for less than 6 months after receipt.

Mitochondrial and cytosolic fractions were obtained as described previously [17].

Cells were harvested by trypsinization and fixed with ice-cold 4% glutaraldehyde in PBS (pH 7.4) at 4°C overnight. Next, the cells were postfixed in 2% osmium tetroxide, dehydrated in a graded series of ethanol, and embedded in Epon 812 resin. Ultra-thin sections (0.05 μm) were obtained using glass knives and double-stained with uranyl acetate/lead citrate. Finally, the cells were observed using a Hitachi-7500 electron microscope (Hitachi Instrument, Tokyo, Japan).

Animal studies were performed according to federal guidelines and approved by the Third Military Medical University Institutional Animal Care and Use Committee. Nude mice (5 weeks old) were obtained from Vital River Laboratories (Beijing, China). MDA-MB-231 cells (2 × 106 cells/mouse) were suspended in serum-free DMEM and injected subcutaneously into the right flank of each mouse. Mice were randomized into two groups (n = 30 per group). One week after tumor inoculation, the mice received either erucin (50 mg/kg, i.p., five times per week) or an equal volume of vehicle. Signs of potential toxicity, such as agitation, impaired movement and posture, indigestion or diarrhea, and areas of redness or swelling were observed during the treatment. Tumor volume, body weight and survival time were measured at various time intervals throughout the study. Tumor volumes were calculated according to the formula (width2 × length)/2. Mice were sacrificed at the termination of the experiment, and tumor tissues from representative mice were lysed and subjected to Western blot analysis. Primary cells were isolated from tumor tissues, cultured in DMEM and then subjected to immunofluorescence and apoptosis analysis.