Copyright: © 2021 Fukui-Kawaura et al. This is an open access article distributed under the terms of the Creative Commons Attribution License (CC BY 3.0), which permits unrestricted use, distribution, and reproduction in any medium, provided the original author and source are credited.

Background: High-risk non-muscle invasive bladder cancer (NMIBC) is thought to be associated with a higher risk of recurrence and progression. A recent study revealed that a high De Ritis ratio was a risk factor in some solid malignancies. This study examined the importance of the De Ritis ratio as a prognostic marker in high-risk NMIBC.

Materials and Methods: A total of 138 patients who were initially diagnosed with high-risk NMIBC between January 2012 to December 2016 were enrolled in this study. The criteria for the high-risk classification followed the EAU guidelines. The recurrence-free and progression-free survival of the higher and lower De Ritis ratio groups were compared. The cut-off value of the De Ritis ratio was set at 1.35, based on a receiver operator curve analysis.

Results: The median observation period was 50.3 months. Among these patients, 32 (23.1%) patients developed recurrent disease and 15 (10.9%) patients showed progression. A multivariate analysis revealed that non-BCG treatment was an independent risk factor for recurrence, and a higher De Ritis ratio was an independent risk factor for cancer progression.

Conclusions: The De Ritis ratio might be a risk factor for progression in high-risk NMIBC.

Bladder cancer is the eleventh most common malignant disease in the world, and non-muscle invasive bladder cancer (NMIBC) accounts for 75% of all bladder cancer cases [1]. Although NMIBC is treated by trans-urethral endoscopic surgery, high-risk NMIBC easily progresses to MIBC and shows a high rate of recurrence [2, 3].

The recommended standard treatments for high-risk NMIBC, which is defined by the NCCN and EAU guidelines, include intra-vesicle BCG or repeat TUR-Bt [4]. Although these are considered to be intensive treatments, the rates of recurrence and progression are still high. Thus, more detailed criteria are needed for the risk assessment.

This study examined the importance of the De Ritis ratio as a prognostic marker in high-risk NMIBC. 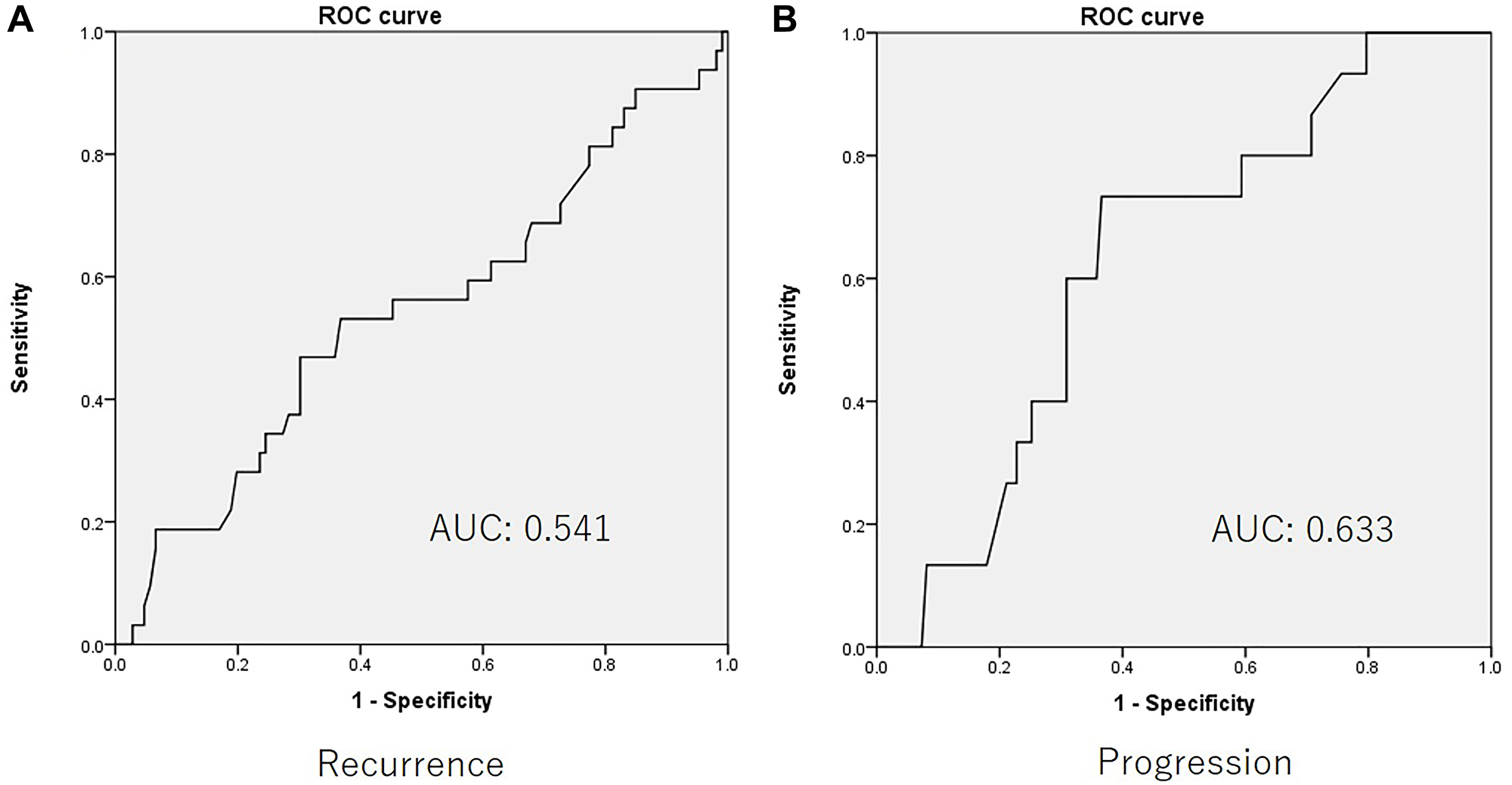 Figure 1: The receiver operator characteristic curve for (A) recurrence and (B) progression. 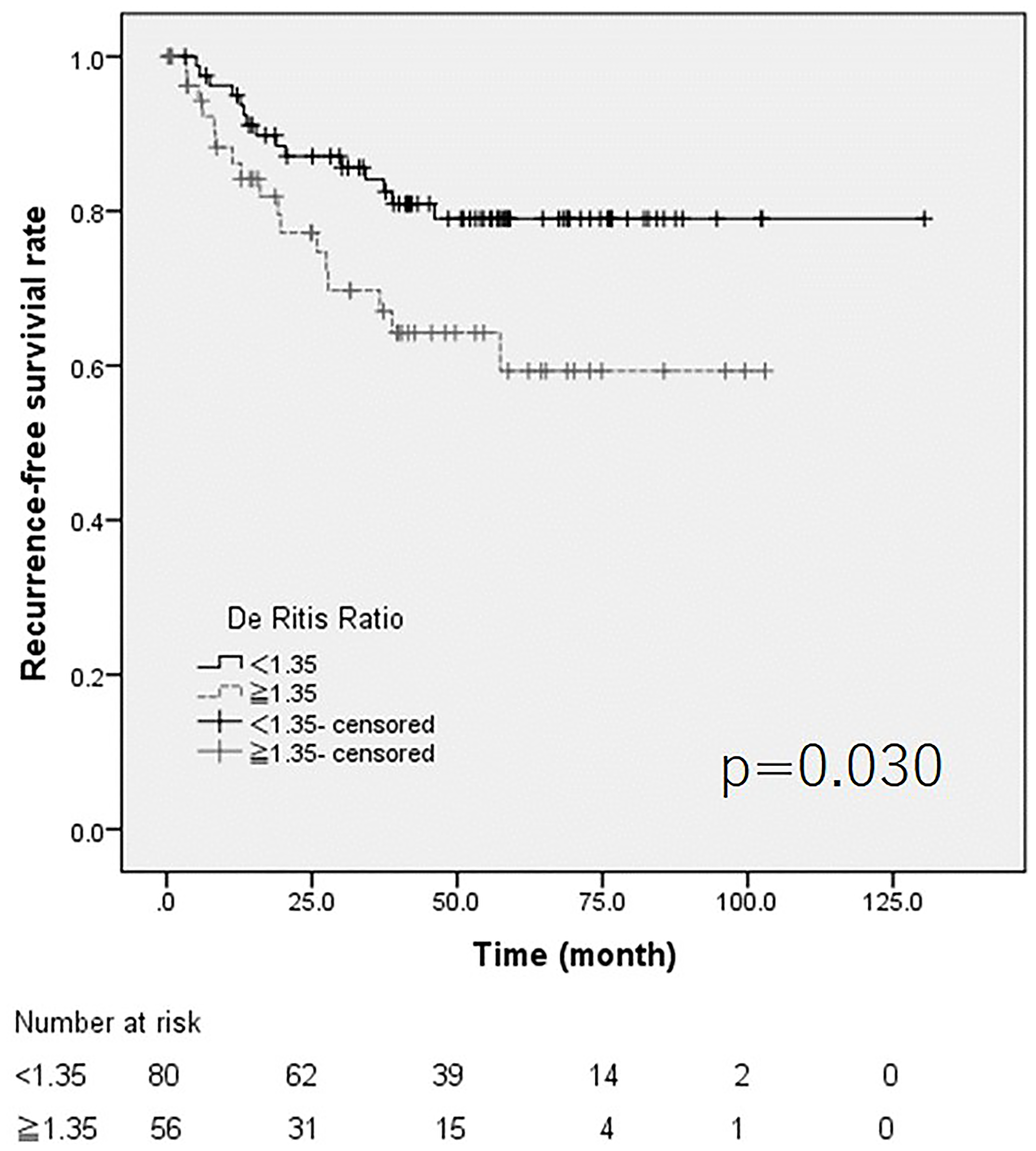 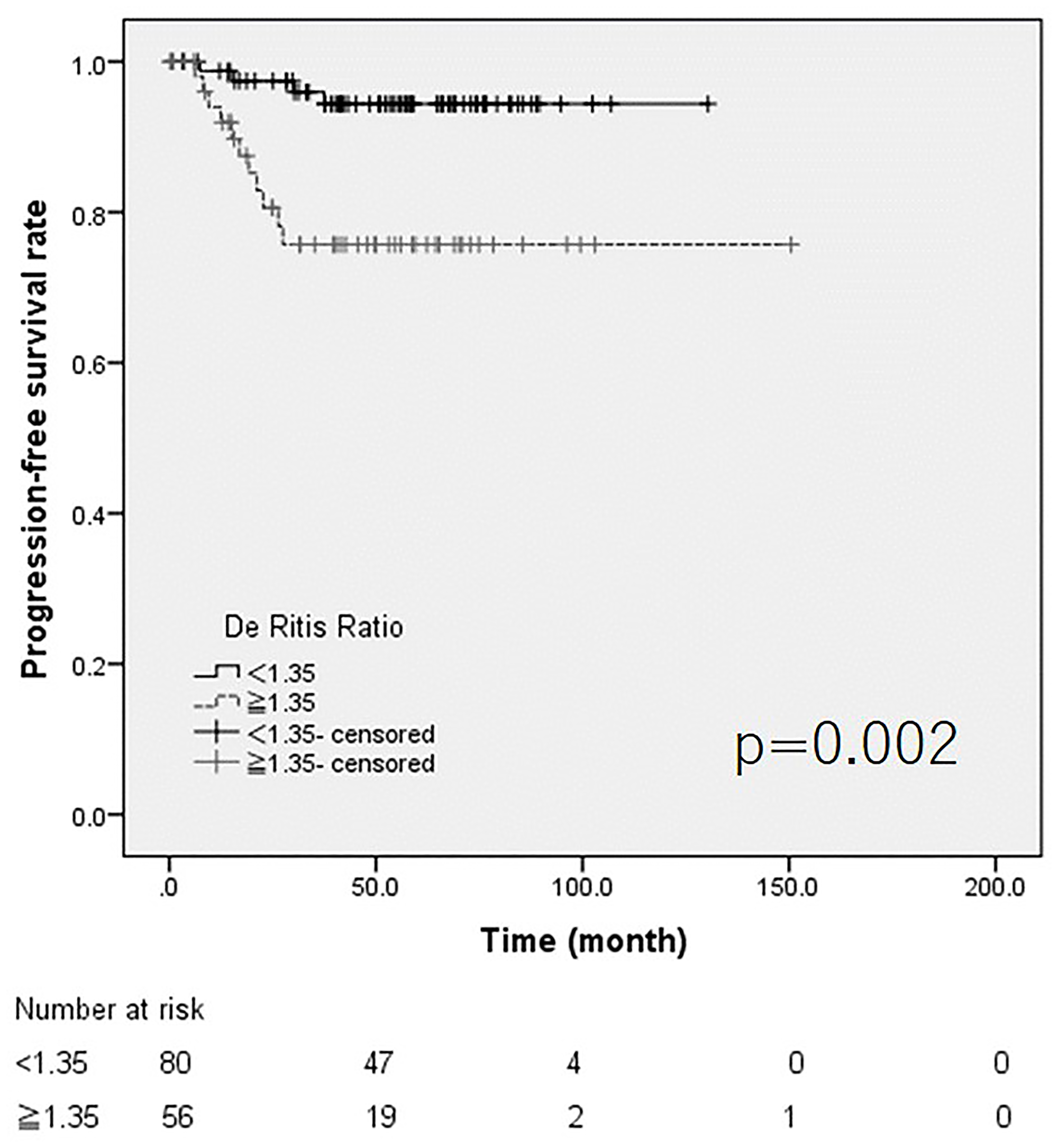 The present study is associated with several limitations. First, the study was retrospective in nature. Second, the sample size was relatively small. To reveal the usefulness of the De Ritis ratio as a biomarker, a longer-term study of a larger population with a prospective design should be performed. Third, this study showed higher age in higher De Ritis group. No previous study showed the correlation between AST/ALT value and age. Thus, further study is needed.

A total of 138 patients who were initially diagnosed with high-risk NMIBC in Yokohama Minami Kyousai Hospital (Yokohama, Japan) between 2012 to 2016 were included in this study. The institutional review board of Yokohama Minami Kyousai Hospital approved this study (IRB No: 1-20-2-63). High-risk NMIBC was defined according to the EAU guidelines as follows: 1) pathological T1, 2) carcinoma in situ (CIS), 3) pathological high-grade urothelial carcinoma, or 3) multiple sites with low-grade and pathological Ta with a maximum diameter of ≥ 3 cm. Some of the patients (n = 57, 41.3%) underwent repeat TUR-Bt, while 103 patients (74.6%) received 6 courses or more of intra-vesical chemotherapy using pirarubicin (30 mg in 15 min) 10 times per 6 months and intra-vesical BCG (80 mg in 60 min; Immunobladder, Japan BCG Lab, Tokyo, Japan) once a week. The De Ritis ratio was calculated at the time of preoperative examination. Follow-up examinations included cystoscopy and urinary cytology performed every 3 months until two years from the initial diagnosis.

The patients’ characteristics and preoperative factors were analyzed by the Mann-Whitney U test using the SPSS software program (SPSS 22.0, Chicago, IL, USA) and the Graph Pad Prism software program (Graph Pad Software, La Jolla, CA, USA). Candidate cut-off points were identified using the area under receiver operator curve (AUROC). The survival duration was defined as the time between the date of the initial pathological diagnosis and the date of tumor recurrence or progression (muscle invasiveness or metastasis). A log-rank test was performed for comparisons between the high and low De Ritis ratio groups. A Cox regression analysis was performed as a multivariate analysis. P values of < 0.05 were considered to indicate statistical significance.

The De Ritis ratio might be a risk factor for progression in high-risk NMIBC.

The institutional review board of Yokohama Minami Kyousai Hospital approved this study (IRB No: 1-20-2-63) and consent to participate was waivered due to retrospective observational study.

The institutional review board of Yokohama Minami Kyousai Hospital approved this study (IRB No: 1-20-2-63) including consent for publication.

Due to ethical restrictions, the raw data underlying this paper are available upon request from the corresponding author.