Copyright: © 2021 Peters et al. This is an open access article distributed under the terms of the Creative Commons Attribution License (CC BY 3.0), which permits unrestricted use, distribution, and reproduction in any medium, provided the original author and source are credited.

Malignant melanoma is one of the fastest growing cancers worldwide and men account for 60% of new diagnoses [1]. Fortunately, cancer treatments have greatly improved and those impacted by cancer are now living longer. Immunotherapy has been established as a standard of care for patients with malignant melanoma, however, the long-term side-effects of immunotherapy are still emerging [2].

It has been well documented that cancer treatment-related toxicities create short and long-term side effects, which can significantly impair the quality of life of cancer survivors. Conventional chemotherapy agents have been thoroughly studied, and there are an abundance of data detailing the negative effects of chemotherapy on testosterone levels, fertility, and the quality of life of cancer patients [3–5]. As immunotherapy is a relatively new treatment for cancer, their side effects on testosterone levels have not been as extensively explored.

Immune checkpoint inhibitors, which are intravenously administered therapies used to treat melanoma, include anti-programmed death-1 (anti-PD-1) antibodies (Pembrolizumab, Nivolumab) and anti-cytotoxic T-lymphocyte antigen-4 inhibition (anti-CTLA4) antibodies (Ipilimumab). There have also been recent developments of investigational therapies, including Indoximod and intratumoral SD-101. Intratumoral SD-101, a synthetic CpG oligonucleotide that stimulates Toll-like receptor 9 (TLR9) and is directly injected into the tumor site, has been shown to increase effectiveness of immune activation at the tumor site when used in combination with PD-1 inhibitors [6]. Indoximod, an inhibitor of the indoleamine 2,3-dioxygenase (IDO) pathway and is administered orally, has many effects on immune regulation allowing for the restoration of immune reactivity against cancer after there has been primary treatment with an active immunization processes (i.e., checkpoint inhibitor therapy) [7, 8]. The duration of treatment for unresectable and metastatic melanoma is currently recommended to continue until there is either disease progression or unacceptable toxicity, however, it is recommended to continue for approximately one year if used as an adjuvant therapy.

While side effects of immunotherapy have not been as comprehensively studied as older therapies, there are known adverse effects related to the attempted modulation of the immune system, including nonspecific inflammation and autoimmunity [9]. Studies over the last decade have begun documenting increasing reports of endocrine dysfunction following the initiation of immunotherapy. Specifically, hypophysitis, or inflammation of the pituitary gland, has been reported in 9–13% of patients treated with immunotherapy [3, 10–15]. Most of the patients who developed hypophysitis received Ipilimumab and there were higher rates observed in males (16.1%) than females (8.7%) [15–17]. Hypophysitis results in dysfunction of the pituitary gland and can cause a deficiency of one or more pituitary hormones, including luteinizing hormone (LH), which may then lead to testosterone deficiency. Thus far, no studies have specifically focused on androgen levels associated with immunotherapy or the clinical significance of androgen hormone deficiency. In our literature review, there was only one study which investigated testosterone levels following immunotherapy. The study reported incidences of Ipilimumab-associated low testosterone, in the absence of hypophysitis, in nine out of 256 patients assessed [15]. However, this study did not routinely assess testosterone levels and few measurements were actually obtained. Additionally, reassessment of testosterone levels was not always performed, so it is difficult to ascertain whether the low testosterone levels were transient or permanent.

Symptoms of low testosterone can be nonspecific and include fatigue, weight fluctuations, muscle loss, depression, insomnia, and sexual dysfunction [4, 18]. Sexual symptoms of androgen deficiency include decreased libido and erectile dysfunction [18, 19]. The implications of sexual dysfunction are far reaching, and may include reduction in self-esteem, impact on relationships, anxiety, and depression [4, 18]. It has been documented that male cancer survivors are likely to experience fatigue, impaired quality of life, and sexual dysfunction, regardless of type of cancer treatment received, and these effects are exacerbated by those with concurrent androgen deficiency [4, 5].

While the impact from chemotherapy agents on patients’ reproductive potential is well known, the impact from immunotherapy still needs to be established, as melanoma is becoming more prevalent in the AYA (adolescent and young adult) population [20–22]. Preclinical studies of Ipilimumab in monkeys demonstrated a clinically significant decrease in testicular weight, with no evidence of sperm histopathology changes [20]. A small study assessing testicular histopathology after immunotherapy for metastatic melanoma found evidence that spermatogenesis may be impacted by immunotherapies, however, the mechanism remains unclear [23]. While it is difficult to calculate fertility risk based on these small studies, there is concern for some level of gonadal dysfunction that needs to be further explored [24].

While immunotherapy has proven to be a successful treatment option for melanoma, there is concern for treatment-related dysfunction of the hypothalamic-pituitary-gonadal axis, which may impair quality of life [4, 5, 18, 20]. As immunotherapy is now widely used for a variety of cancers specifically in early stages, including non-small cell lung cancer, bladder cancer, renal cell carcinoma, and Hodgkin’s lymphoma [13], understanding the side effects associated with immunotherapy, while keeping in mind the direct impact of the treated malignancy, will allow for better recognition and earlier treatment for adverse effects in many future patients.

Forty-nine patients met inclusion criteria. Patient demographics are reported in Table 1. Median age at diagnosis was 64 (33–92) years. Fifteen patients had stage 3, 33 patients had stage 4, and one patient had a primary pineal gland melanoma that was not staged. At the time of analysis, 16 patients were deceased and 31 patients were alive, 13 of whom were tumor free. Two patients transferred care to a local cancer center and their status was unknown. Patients were treated with Pembrolizumab, Ipilimumab, Nivolumab, or investigational immunotherapy agents Indoximod and intratumoral SD-101 (Figure 1). Of the 49 patients who received immunotherapy, 45 of these patients had metastatic disease. The other four patients received immunotherapy as adjuvant therapy for melanoma. 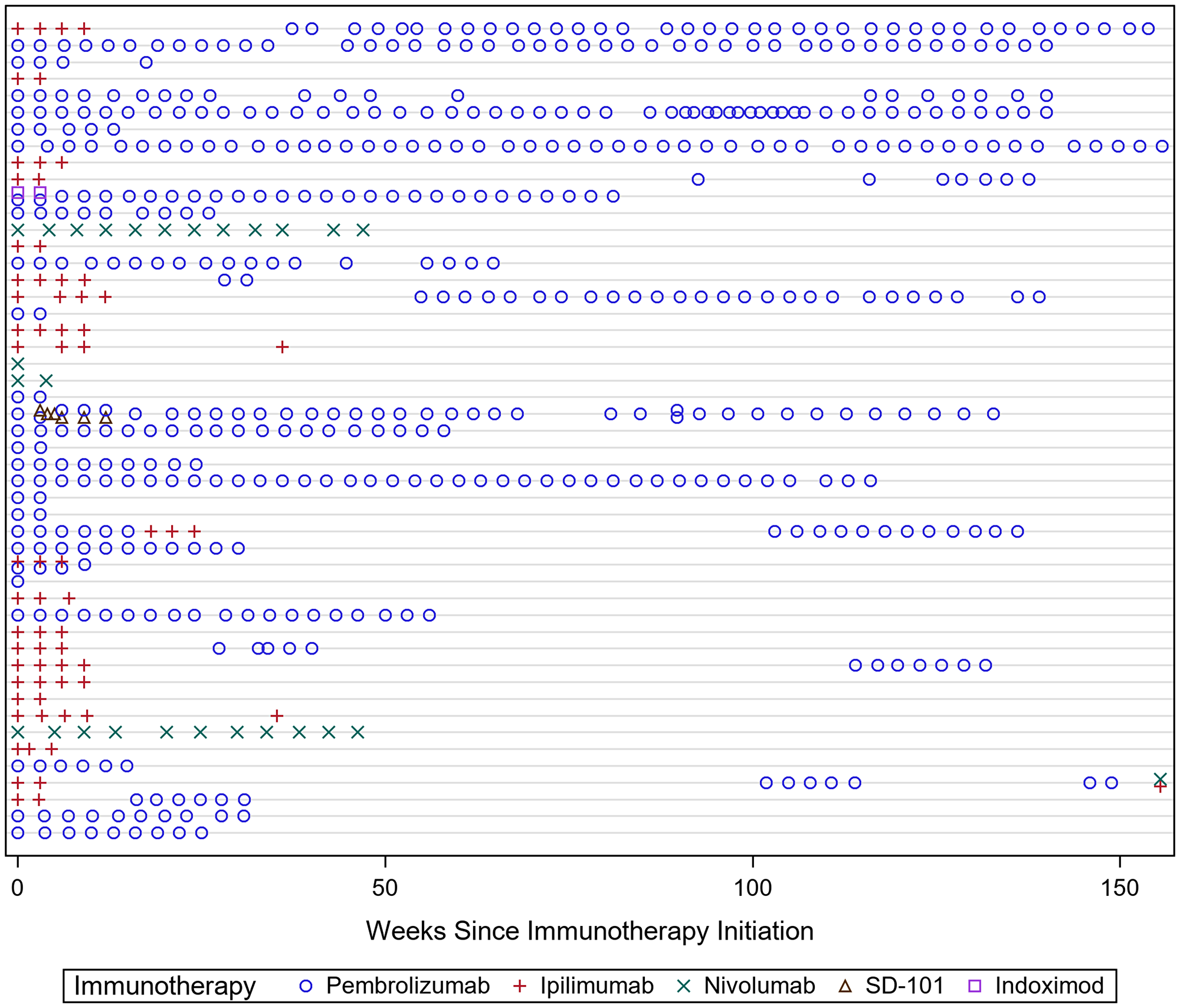 Figure 1: The different rows demonstrate each patient’s treatment paradigm across time. The heterogeneity in treatment regimens made it difficult to distinguish how each individual immunotherapy agent affected testosterone levels. On covariate analysis, there was no significant association between testosterone levels and treatment modality. 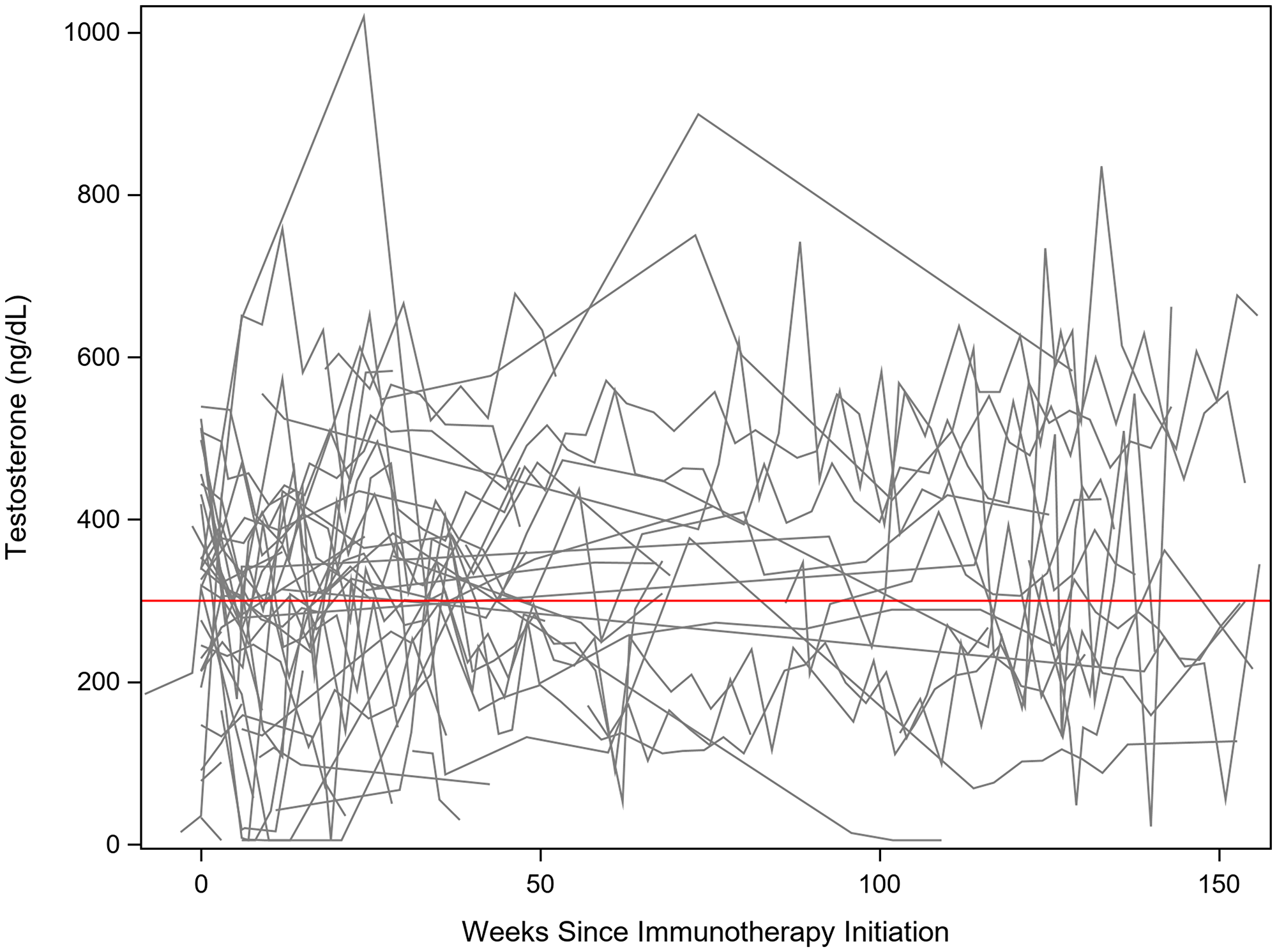 Figure 2: Testosterone levels assessed after initiation of immunotherapy. The red line is a reference for 300 ng/dL. There was large intrapersonal variability in testosterone levels, as demonstrated by the oscillating values within each patient. However, it is evident many patients had testosterone levels drop below 300 ng/dL, with many of those patients dipping well below 200 ng/dL.

Table 2: Additional clinical information of the patients with previously normal testosterone who subsequently developed low testosterone after treatment with immunotherapy

Table 4: Multivariable model was utilized to include variables that were significant or nearly significant on univariate analysis

Enrollment in a clinical trial and weeks since immunotherapy initiation were significant.

Out of our patient population, 8% developed hypophysitis. All four patients showed evidence of hypopituitarism within three months of initiation of Ipilimumab, which has been documented in previous studies [15–17]. These data suggest that patients being treated with Ipilimumab need diligent monitoring of their endocrine function during the first three months of their treatment and up to 12 months after completion of their immunotherapy treatment [25].

Another limitation of this study is the heterogeneity within each patient’s treatment course, which made it difficult to analyze patients based on specific treatment received. Specifically, of the 34 patients identified with low testosterone during immunotherapy treatment, two patients were also being treated with steroids and five patients received concurrent radiation therapy (one received retroperitoneal radiation while the other four received brain radiation). It cannot be determined whether the low testosterone was due to immunotherapy and/or the concurrent treatment with steroids or radiation therapy.

As this was a retrospective study, fertility was not assessed in these patients. However, as melanoma is becoming more prevalent in the AYA population, future work needs to be completed to addresses any potential fertility risk in melanoma patients receiving immunotherapy, with particular attention to sperm count and function.

After seeking Institutional Review Board and Ethics approval, we performed a retrospective chart review of patients with malignant melanoma treated with immunotherapy at Holden Comprehensive Cancer Center from 2009–2019 using the Melanoma Molecular Epidemiology Resource database. Patients were included in the analysis if they had at least two testosterone levels checked while on immunotherapy (Figure 3). Low testosterone was defined in this study as total testosterone < 300 ng/dL upon two consecutive lab draws, according to American Urological Association (AUA) guidelines on testosterone deficiency [27]. Blood was collected and total testosterone was assessed via electrochemiluminscence immunoassay.

Figure 3: Systematic review of 149 patients. Patients were excluded in the study if they had fewer than two assessments of testosterone levels.

Mixed effects regression models were applied to assess for changes in serum testosterone levels over time while adjusting for potential confounders. Time-dependent covariates were incorporated to capture changes in treatment and onset of other medical conditions. Random effects were included to account for the longitudinally correlated nature of repeat assessment and unequal time spacing between visits. Beta coefficients and 95% confidence intervals are reported. All statistical testing was two-sided and assessed for significance at the 5% level using SAS v9.4 (SAS Institute, Cary, NC). Power calculations were not performed, as this was a retrospective study meant to gain preliminary estimates of the true underlying population values.

A.P., V.M., and W.T. conceived the presented idea. M.P. collected the data for analysis. S.M. analyzed the data and performed the computations. All authors discussed the results. M.P. wrote the manuscript with support from A.P., V.M., W.T., and S.M.