Copyright: © 2020 Jiang et al. This is an open access article distributed under the terms of the Creative Commons Attribution License (CC BY 3.0), which permits unrestricted use, distribution, and reproduction in any medium, provided the original author and source are credited.

Chronic myelomonocytic leukemia (CMML) is a clonal hematopoietic malignancy with the presence of sustained monocytosis in peripheral blood alongside myelodysplastic and myeloproliferative characteristics. Its estimated incidence is 4 per 100,000 persons per year. The median age at diagnosis is 71–74 years old. CMML has a propensity for males rather than females, at a ratio of 1.5–3:1 [1]. In the 2008 World Health Organization (WHO) classifications, CMML was divided into 2 subgroups, CMML-1 and CMML-2 [2] while in 2016, it was further classified into 3 subgroups, CMML-0, CMML-1, and CMML-2, according to the percentage of blasts and blast equivalents in bone marrow and peripheral blood [3]. The 2016 WHO classification also recommended categorization of CMML into “proliferative” (MPN-CMML) and “dysplastic” (MDS-CMML) sub-types based on a white blood cell count of ≥ 13 × 109/L for MPN-CMML [3, 4]. In the most recent literature, additional classification of pre-CMML conditions as well as special CMML variants were proposed [5]. The clinical and pathological features of CMML are highly heterogeneous and variable with wide differences in survival and risk of disease evolution into acute myeloid leukemia (AML) or acute myelomonocytic leukemia (AMML).

Recurrent somatic mutations have been identified in more than 90% of CMML patients. These mutant genes mainly encode signaling molecules (NRAS, KRAS, CBL, ETNK1, CSF3R, and JAK2), epigenetic regulators (TET2, IDH1, IDH2, DNMT3A, ASXL1, SETBP1, and EZH2), splicing factors (SRSF2, SF3B1, ZRSR2, and U2AF1), transcription factors (RUNX1, ETV6, and NPM1), and tumor suppressor gene (TP53) [1, 3]. Associations between these somatic mutations and disease phenotype or prognosis have been suggested, e.g., co-occurrence of TET2 and SRSF2 mutations is common in CMML and specific for myeloid neoplasms with monocytosis [1]; the mutations in ASXL1, NRAS, RUNX1, or SETBP1 are associated with an unfavorable prognosis [8], whereas mutated TET2 with wild type ASXL1 (muTET2/wtASXL1) is associated with a favorable CMML prognosis [9].

The racial cancer disparities in outcomes have been described and attributed to a combination of biological and nonbiological factors. African Americans continue to have higher cancer mortality rates and shorter overall survival [10]. Age-adjusted overall survival of acute myeloid leukemia (AML) was reported to be worse in Hispanics compared with whites [11]. It was reported that Hispanic whites had an age-adjusted lower incidence rate of CMML compared to non-Hispanic whites [12]. However, there are no published studies on the racial disparity of cytogenetics and genomics in Hispanic CMML patients. The aim of this study is to define the cytogenetic and molecular landscapes of Hispanic CMML patients from Puerto Rico and explore their potential clinical significance. All study methods were carried out in accordance with relevant guidelines and regulations.

One hundred and eleven (111) Hispanic CMML patients from Puerto Rico were diagnosed in the Genoptix Medical Laboratory from 2009 to 2018. The age range was from 46 to 96 years with a median age of 74. Sixty-five (65) were male and forty-six (46) were female (data not shown). The epidemiological features are similar to the previous published data from CMML patients [1, 3].

Table 1: Cytogenetic abnormalities in 107 Hispanic CMML patients from Puerto Rico compared with that in Such, E. et al. [7] and Wassie, EA. et al. [6]

Regarding the 2008 WHO subgroup classification [2], we further analyzed the one hundred and seven (107) patients with karyotype results available. Ninety-two (92) patients were diagnosed as CMML-1 (86%) and fifteen (15) as CMML-2 (14%). CMML-1 and CMML-2 rates were similar to that published by Such, E. et al. and Wassie, EA. et al. (Table 2) [6, 7]. There was no significant low rate of CMML-2 in Hispanic CMML patients from Puerto Rico although all these patients (107 patients) had a significantly lower rate of cytogenetic abnormalities. However, Hispanic CMML patients had a significantly lower rate of CMML-1 with abnormal karyotype (Table 2). 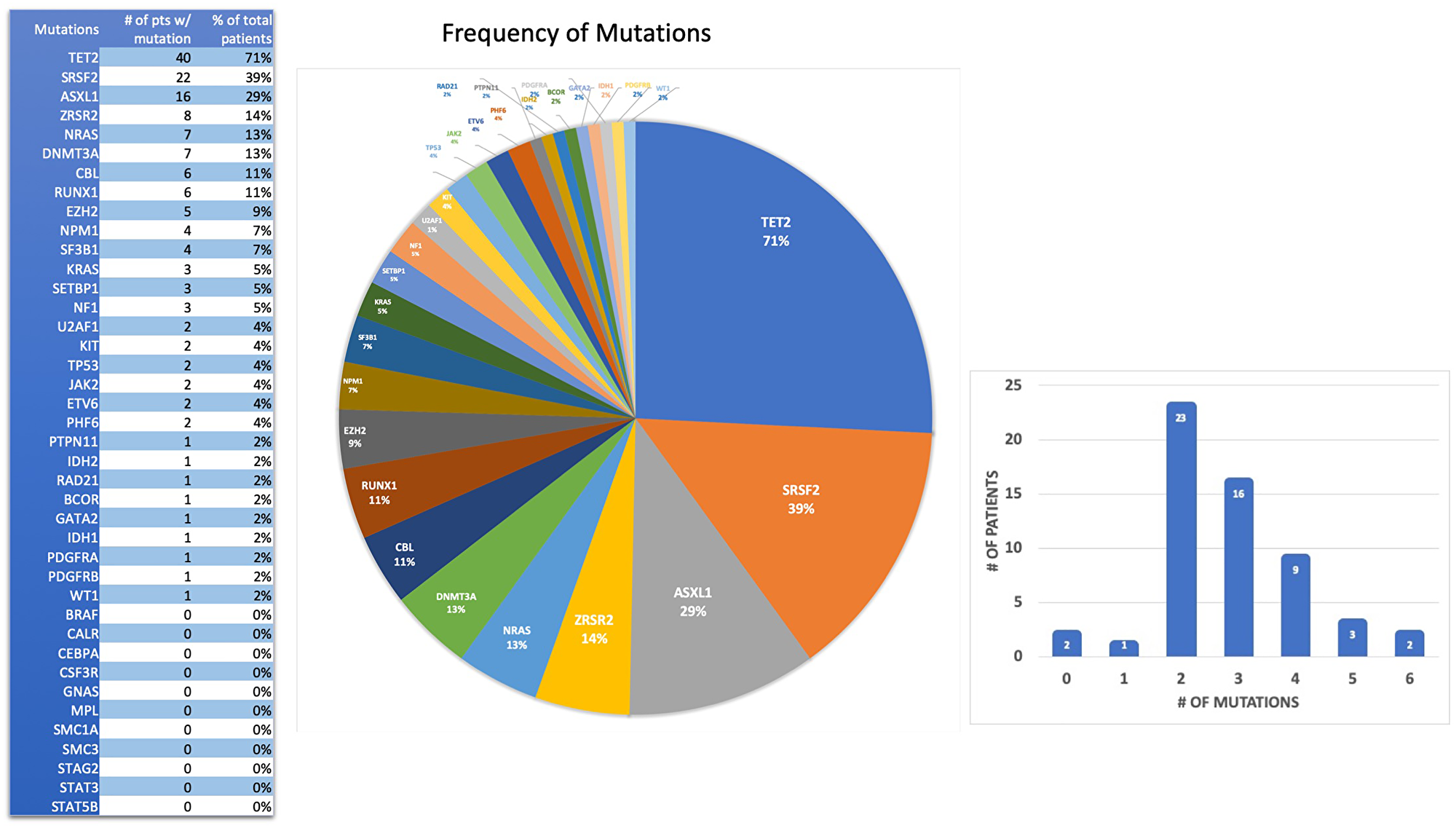 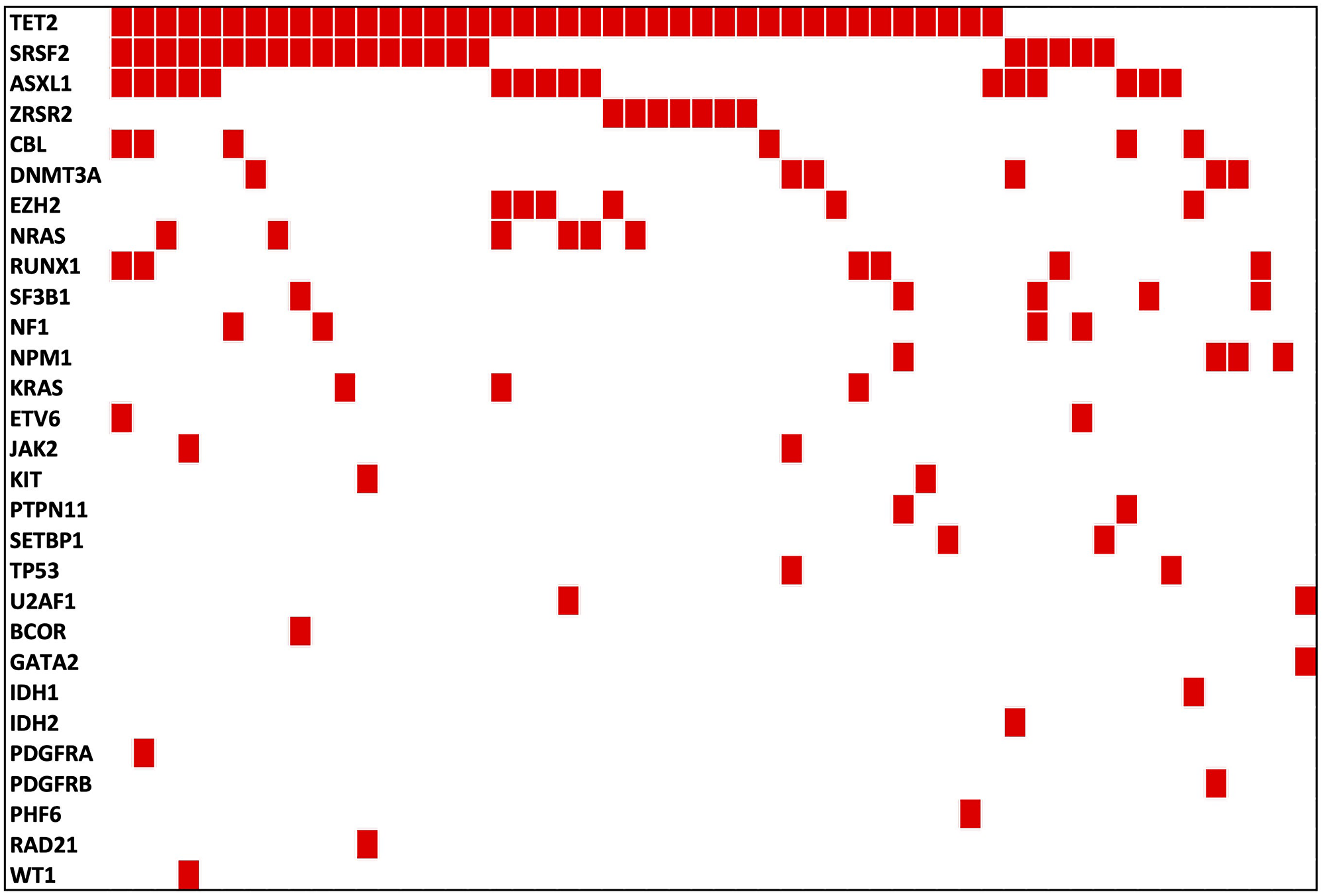 **prognosis-associated gene mutations. P value by the Fisher’s test. Ns: no significance according to Benjamini–Hochberg procedure. NA: not available.

P value by the Fisher’s test.

Ethnic and racial disparities have been described in the outcomes of hematological malignancies such as acute leukemia and attributed to a combination of biological and non-biological factors [13, 14]. Age-adjusted overall survival of AML was reported to be worse in Hispanics compared with whites [11]. It was demonstrated that cytogenetic abnormalities are common in AML and are associated with a significant prognostic impact on AML patients. African Americans were more commonly classified in the favorable and unfavorable cytogenetic risk groups, and less commonly classified in the intermediate group than whites [15]. AML appears less common in Hispanics when compared with whites; however, acute promyelocytic leukemia (APL) appears comparatively more common in Hispanics when compared with whites [16]. It was revealed that there were significantly higher mutation rates of ASXL1 and TET2 genes in Hispanic AML patients than in white AML patients, which may provide a biological explanation for the inferior outcomes of AML in Hispanics [11]. The varied distribution of acute leukemia among these ethnic groups suggests that host susceptibility factors are critical determinants of disease in one group, but not in another group [11]. The extent to which the environment interacts with these factors is unknown. Although there are limited published data, it has been shown that African American patients with MDS had worse overall survival (OS) compared to whites. African American patients are more likely to have poor-risk cytogenetics and high- or very-high-risk categories per IPSS-R, and a higher incidence of poor-risk mutations such as TP53 [17].

Sole trisomy 8 is not considered presumptive evidence of myelodysplastic syndrome (MDS) in cases without morphological evidence of dysplasia. This is in part because trisomy 8 can be identified as a constitutional trisomy 8 mosaicism (cT8M) [18].

Overall mutation rates detected by 40-gene myeloid molecular panel in present study were similar to that in these previous studies [8, 9]. Ninety-six percent of Hispanic CMML patients in Puerto Rico harbor at least one mutation. It was suggested that somatic mutations in ASXL1, RUNX1 and SETBP1 as well as RAS pathway mutations had significant independent negative prognostic impact on CMML patients [21, 22]. Mutations in TET2, ASXL1, DNMT3A, NRAS, RUNX1, and SETBP1 genes may associate with CMML prognosis. Studies indicated that ASXL1, DNMT3A, NRAS, RUNX1, and SETBP1 mutations are associate with an unfavorable prognosis in CMML patients [1, 8]. Mutated TET2 with wild type ASXL1 (muTET2/wtASXL1) is associated with a favorable prognosis [9]. We compared our results from Hispanic CMML patients from Puerto Rico with the above two previous published studies. Both studies had relatively large patient population with CMML and large gene panels applied in their studies [8, 9]. Hispanic CMML patients from Puerto Rico in our current study had lower mutation rates in ASXL1 and SETBP1, but a higher mutation rate of DNMT3A. DNMT3A mutation was reported to be associated with an unfavorable prognosis in CMML [23], the true clinical significance of DNMT3A mutation in Hispanic CMML patients and how DNMT3A interacts with other mutations are uncertain.

TET2 catalyzes demethylation and upregulates transcription through conversion of 5-methyl-cytosine to 5-hydroxymethyl-cytosine. TET2 mutations are common and thought to be the driver mutations in CMML [24]. The prognostic relevance of TET2 mutations is uncertain with some studies demonstrating controversary impact on overall survival [25]. ASXL1 mutations in vitro studies could enhance the de-ubiquitinase activity of the ASXL1–BAP1 (BRCA associated protein 1) complex, which then may cooperate with loss of TET2 to skew towards myeloid development [26]. Recent studies revealed a favorable impact from TET2 mutations in the absence of ASXL1 mutations [9]. Our current observation indicates that Hispanic CMML patients have a significantly higher rate in muTET2/wtASXL1.

It was suggested that most NPM1 mutations in CMML patients likely indicated disease progression to acute myeloid leukemia [27]. There were four (4) CMML patients harboring NPM1 mutations (4/56, 7%) in this study. One patient (1) was diagnosed as CMML-2 while the other three (3) were diagnosed as CMML-1 (Supplementary Table 3). Follow-up with these patients may provide more valuable information regarding disease progression to AML.

We conducted a retrospective investigation of Hispanic CMML patients from Puerto Rico diagnosed in Genoptix Medical Laboratory in Carlsbad, California, between 2009 and 2018. The specimens were submitted to Genoptix Medical Laboratory randomly. The patients were from twenty (20) medical centers or doctor offices across whole territory of Puerto Rico, which likely represents the Hispanic population in Puerto Rico. IRB approval to perform a retrospective chart review to collect and analyze clinical data, including laboratory, cytogenetic, mutational, demographic and pathological diagnostic data, was issued by Sterling IRB (ID: 6173) and informed consent was waived by this IRB. The diagnosis of CMML was established according to the criteria proposed by 2008 World Health Organization (WHO) [2].

Karyotype studies were performed according to the established standard protocol in Genoptix Medical Laboratory. Briefly, bone marrow aspirate cells were cultured for 24 and 48 hours without stimulation. G-banded metaphase cells were prepared by using standard techniques. When successful cell cultures were achieved, at least 20 metaphases with good banding were analyzed for each sample. A clonal abnormality was defined as the same numerical gain or structural abnormalities in at least 2 metaphase cells or the same numerical loss in at least 3 metaphase cells. A complex karyotype was defined as 3 or more chromosome abnormalities. The karyotypes were recorded by following the recommendations in the International System for Human Cytogenetic Nomenclatures (ISCN 2008).

The Fisher’s exact test was used to analyze differences in the distribution of cytogenetic and molecular abnormalities among different CMML patient populations. Multiple comparison correction was performed to control false discovery rate (FDR) using Benjamini–Hochberg procedure and then significance was decided accordingly.

The study has been examined and certified by the Ethics Committee of Sterling IRB (ID:6173) in agreement with institutional guidelines.

The datasets used or analyzed during the current study are available from the corresponding author on reasonable request.

We thank Dr. Paris Peterson in Genoptix Medical Laboratory for her assistance in database search and Andrew S. Jiang for editing the manuscript.