Copyright: © 2020 Hirahara et al. This is an open access article distributed under the terms of the Creative Commons Attribution License (CC BY 3.0), which permits unrestricted use, distribution, and reproduction in any medium, provided the original author and source are credited.

C-reactive protein (CRP) is a sensitive marker of an infectious or inflammatory disease state and is also an important hallmark of carcinogenesis and cancer progression [3, 4]. The Glasgow prognostic score (GPS) is evaluated using serum CRP and albumin levels. It was first proposed as a prognostic indicator in patients with unresectable lung cancer [5], and its prognostic significance has been validated in different types of cancers [6–10]. The modified GPS (mGPS) highlights the importance of CRP; if CRP is elevated, even patients with normal albumin levels are assigned a score of 1 [11]. Presently, the mGPS is more widely used than the GPS to assess the prognoses of cancer patients [12–14]. Notably, the high-sensitivity mGPS (HS-mGPS) places a higher weightage on the CRP value by setting the cut-off CRP value to 0.3 mg/dl, to further enhance the prognostic value of the mGPS [15].

The area under the curve (AUC) values of the GPS, mGPS, and HS-mGPS for predicting overall survival (OS) were 0.625, 0.570, and 0.593, respectively. The GPS had the greatest AUC value among the three inflammation-based prognostic scoring systems, and this value was significantly higher than the corresponding value for the mGPS (p < 0.001) (Figure 1A). 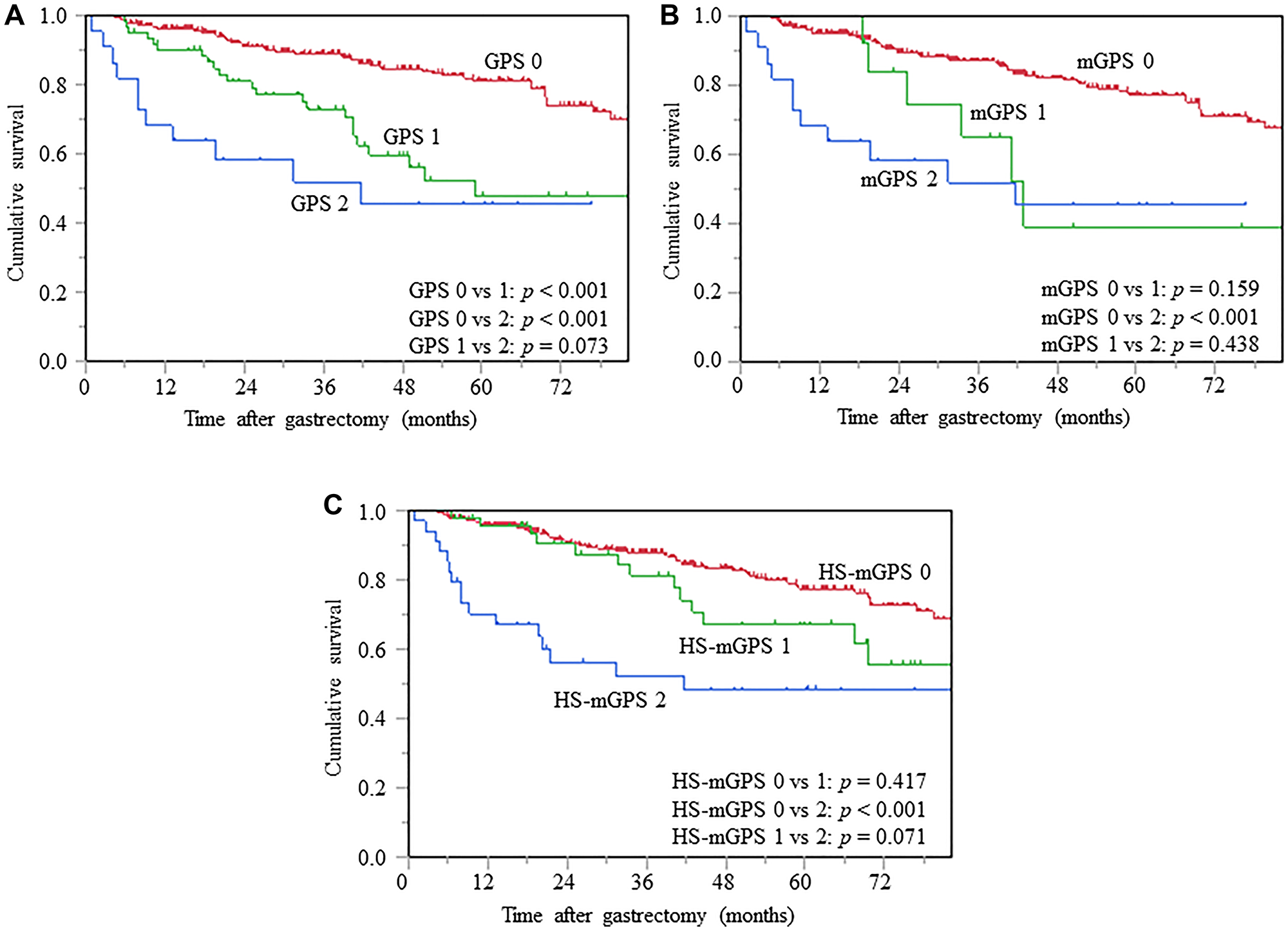 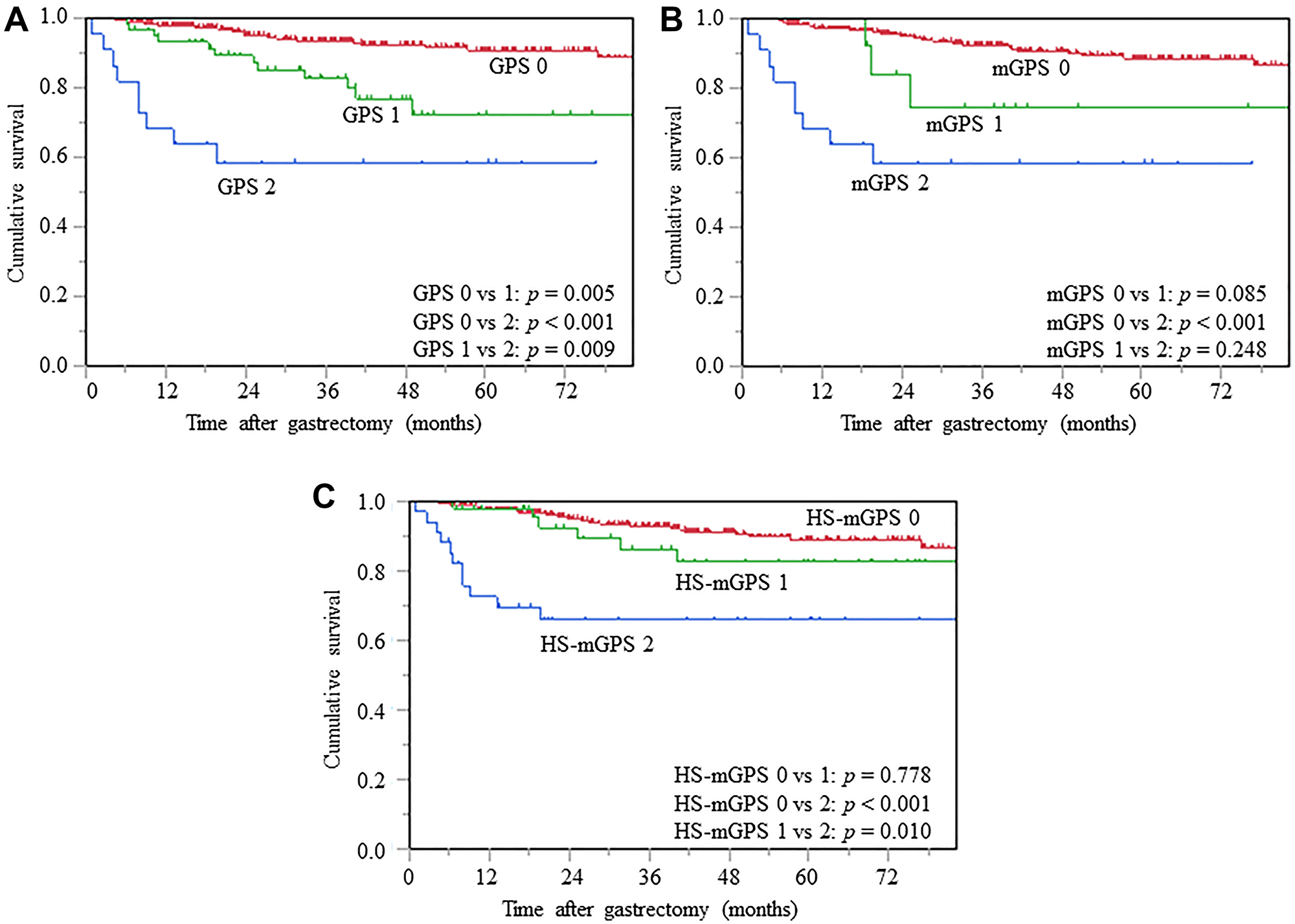 Cancer-related inflammation leads to alteration of the tumor microenvironment and contributes to the promotion of cancer cell proliferation, invasion, and metastatic spread, and the inhibition of apoptosis and immunosuppression [16, 17]. Moreover, increasing evidence suggests that inflammation plays a role in cancer development and may also be accelerated by the cancer itself due to increased catabolism and malnutrition [18, 19]. CRP, a reliable marker of systemic inflammation, reflects cell-mediated immunity associated with poor outcomes in several cancers [3, 4]. Additionally, serum albumin levels are a leading indicator of nutritional status and serum albumin levels likely decrease secondarily to a systemic inflammatory response [1, 2]. Therefore, nutritional status and inflammatory response should be considered in conjunction when assessing the prognoses of cancer patients. Many studies seeking effective prognostic factors that could facilitate risk-stratified patient management and improvement of therapeutic outcomes are ongoing.

Forrest et al. [5] initially proposed the GPS, a composite of serum CRP and albumin levels, as a prognostic indicator for cancer patients, based on the concept that elevated CRP levels (cut-off, 1.0 mg/dl) or decreased albumin levels (cut-off, 3.5 mg/dl) may indicate an aggressive cancer progression. Subsequently, McMillan et al. [11] revised the GPS to the mGPS, a modified cumulative prognostic score, wherein patients with normal CRP levels are assigned a score of 0, irrespective of serum albumin levels, with the aim to predict the prognoses of various cancers more accurately. However, the ability of mGPS to predict poor prognoses is restricted because only a few patients show abnormal mGPS, when a cut-off value of 1.0 mg/dl for CRP is used [20–22]. Subsequent studies further refined the mGPS to the HS-mGPS using a further lower threshold for CRP (cut-off value: 0.3 mg/dl), in order to enhance the predictive ability of inflammation-based prognostic systems in cancer patients [15]. In this study, 83 (19.1%) and 36 (8.3%) patients with gastric cancer had abnormal scores of 1 or 2, respectively, according to the GPS and mGPS scoring systems. However, when a lower cut-off value for CRP in the HS-mGPS scoring system was used, 82 (18.9%) patients had abnormal scores, which was a more sensitive result than that of mGPS and equal to that of GPS. The impact of HS-mGPS on the long-term prognosis of gastric cancer patients is not well understood, and this is one of the first reports to study this aspect, but it did not show a superiority of HS-mGPS.

In this retrospective cohort study, we analyzed three inflammation-based prognostic scoring systems, namely GPS, mGPS, and HS-mGPS, to evaluate which of these is the strongest predictor of long-term survival of patients with gastric cancer. Resultantly, the original GPS scoring system showed the largest AUC, compared to the AUCs of the mGPS and HS-mGPS, suggesting that the GPS has the best ability to predict OS and CSS in patients with gastric cancer. The log-rank tests for the GPS revealed significant differences in OS, in the comparison of scores 0 vs. 1, and scores 0 vs. 2; however, in the mGPS and HS-mGPS systems, the corresponding difference was observed only in the comparison of score 0 vs. 2. Moreover, each GPS was independently associated with CSS. In addition, among the three inflammation-based prognostic scoring systems, GPS alone was found to be an independent prognostic predictor of CSS in multivariate analysis. Thus, compared to its derivatives, the original GPS appeared to be a more useful predictor of long-term survival in patients with gastric cancer. This may be because the GPS is determined using both CRP and albumin values, whereas scores of 0 in the mGPS and HS-mGPS systems are determined by CRP alone, regardless of albumin levels [5, 11]. That is, although hypoalbuminemia is more likely to occur secondary to elevated CRP levels, a crucial difference between the GPS and mGPS is the inclusion of patients with hypoalbuminemia in the absence of elevated CRP levels. This means that both the inflammatory response and nutritional status must be taken into account, in order to predict the prognoses of cancer patients more accurately.

This study has several limitations. First, selection bias may be present because this was a single-institution, retrospective study. Second, we focused on the preoperative assessment of the GPS and its derivatives, without evaluating their postoperative changes. Third, the other parameters correlating systemic inflammation and nutrition, such as neutrophil-to-lymphocyte ratio, systemic inflammatory index, and prognostic nutritional index, were not evaluated. It remains debatable whether the prognoses of cancer patients can be improved by nutritional intervention. Further studies are warranted to address the above-mentioned limitations.

In conclusion, our results indicated that GPS is the most reliable assessment tool among the three assessed inflammation-based prognostic scoring systems for predicting long-term survival of patients with gastric cancer who underwent curative laparoscopic gastrectomy. Further studies on gastric cancer and other malignancies, and prospective multi-institutional studies are needed to clarify the efficacy of GPS and its derivatives, which will further enable beneficial clinical applications.

We retrospectively reviewed the medical records of 434 consecutive patients with histologically verified gastric adenocarcinoma who underwent curative laparoscopic gastrectomy at our institution between January 2010 and December 2017.

The exclusion criteria included patients with an inflammatory, bone marrow, hematological, or autoimmune disease; patients who underwent neoadjuvant chemotherapy; patients with an active infection within one month before surgery; and patients with histories of other malignancies within the preceding 5 years.

The extent of gastrectomy and lymph node dissection were determined in accordance with the Japanese Gastric Cancer Treatment Guidelines (version 4) [27]. The clinicopathological classification of gastric cancer was assessed per the International Union Against Cancer Tumor, Node, Metastasis (TNM) classification (seventh edition) [28]. Postoperative complications were classified according to the Clavien-Dindo (CD) grading system, and those with CD grade II or higher complications were assessed [29].

The retrospective protocol of this study was approved by the Ethical Review Board of Shimane University, Faculty of Medicine (Shimane, Japan), and the study is registered with the University Hospital Medical Information Network Clinical Trials Registry (UMIN000030472). The requirement for informed consent was waived because of the retrospective nature of this cohort study.

After undergoing surgery, patients were carefully followed up by physical examination and blood tests, every 3 months, for 5 years. Computed tomography scans were performed every 6 months for 3 years, and then every year from year 3 to year 5. Adjuvant chemotherapy using 5-fluorouracil-based adjuvant chemotherapy regimens (cisplatin plus tegafur/gimeracil/oteracil or capecitabine) was administered to the majority of patients with advanced gastric cancer. Furthermore, post recurrence chemotherapy was administered according to the guidelines edited by the Japan Gastric Cancer Association [27]. OS was calculated from the date of gastrectomy to the date of either death or last follow-up. CSS was defined as the interval from the date of surgery and to the date of cancer-specific death.

The Chi-squared or Fisher’s exact tests were used to evaluate the differences between the categorical variables. The OS and CSS were assessed using the Kaplan-Meier method and compared using the log-rank test. Cox proportional hazards regression models were used to estimate the HR with 95% CI. All statistical analyses were carried out using the JMP software (version 15 for Windows; SAS Institute). A p-value of < 0.05 was considered statistically significant. The time-dependent ROC curves were generated and the AUCs were calculated to evaluate the discriminatory ability of each scoring system.