A single institution retrospective review of the first 200 NET patients with gallium-68 DOTATATE imaging from Dec 2016 to Dec 2017 was conducted. Questions related to NETs of unknown primary, correlation of Standardized Uptake Value (SUV) to Ki-67 (which signifies proliferation rate), the effects of long-acting systemic somatostatin analog (SSA) on SUV were part of our data analysis.

Gallium-68 DOTATATE imaging seems to distinguished G3 NET from G1/G2 based on mean SUV, and also identified the primary tumor site in 17 of 38 (45%) patients with unknown primary. Systemic exposure to long acting SSA does not appear to influence mean SUV of gallium-68 DOTATATE scan.

Neuroendocrine tumors (NETs) are unique neoplasms that are known for their phenotypic as well as molecular heterogeneity [1]. NETs can be classified as functional or nonfunctional based on their ability to produce certain hormones (serotonin, insulin, vasoactive intestinal peptide, gastrin) [2]. NETs can also be characterized as high grade, intermediate grade or low grade based on proliferative activity according to Ki 67 index. Low and intermediate grade well differentiated NETs (Ki 67 ≤ 20%) tend to overexpress somatostatin receptors (SSTRs) and have the potential to secrete various peptide hormones in about 20–40% cases [3]. A Ki 67 index between 3 and 20% is considered intermediate grade or grade 2. The grade 2 NETs tend to progress somewhat rapidly as compared to grade 1, however individual cases can show heterogenous tumor growth rates. Grade 2 NETs also express somatostatin receptors and can produce peptide hormones. Grade 1 and Grade 2 NETs are managed similarly for most part and are by definition well differentiated [4]. High grade neuroendocrine neoplasms are characterized by Ki 67 index of > 20% and are sub-divided into well differentiated and poorly differentiated subtypes [3]. This distinction, based on morphology (well differentiated vs poorly differentiated), is fairly new and strategies regarding distinct managements are currently being explored. In general grade 3 neuroendocrine neoplasms are fast growing, not particularly somatostatin receptor dense, and rarely produce functional hormones.

Octreoscan was of great clinical value in the disease analysis, staging, and treatment response assessment for oncologists. However, the value and superiority of gallium-68 DOTATATE has been proven repeatedly in neuroendocrine tumors [13, 14]. Nonetheless real world evidence of application of gallium-68 DOTATATE in post FDA approval era is largely unknown and of great value.

We reviewed over 200 gallium-68 DOTATATE scans and tried to evaluate its role in identifying the primary site for NETs of unknown primary. We also share our single center initial experience with the gallium-68 DOTATATE PET/CT in the USA clinical domain since its FDA approval. 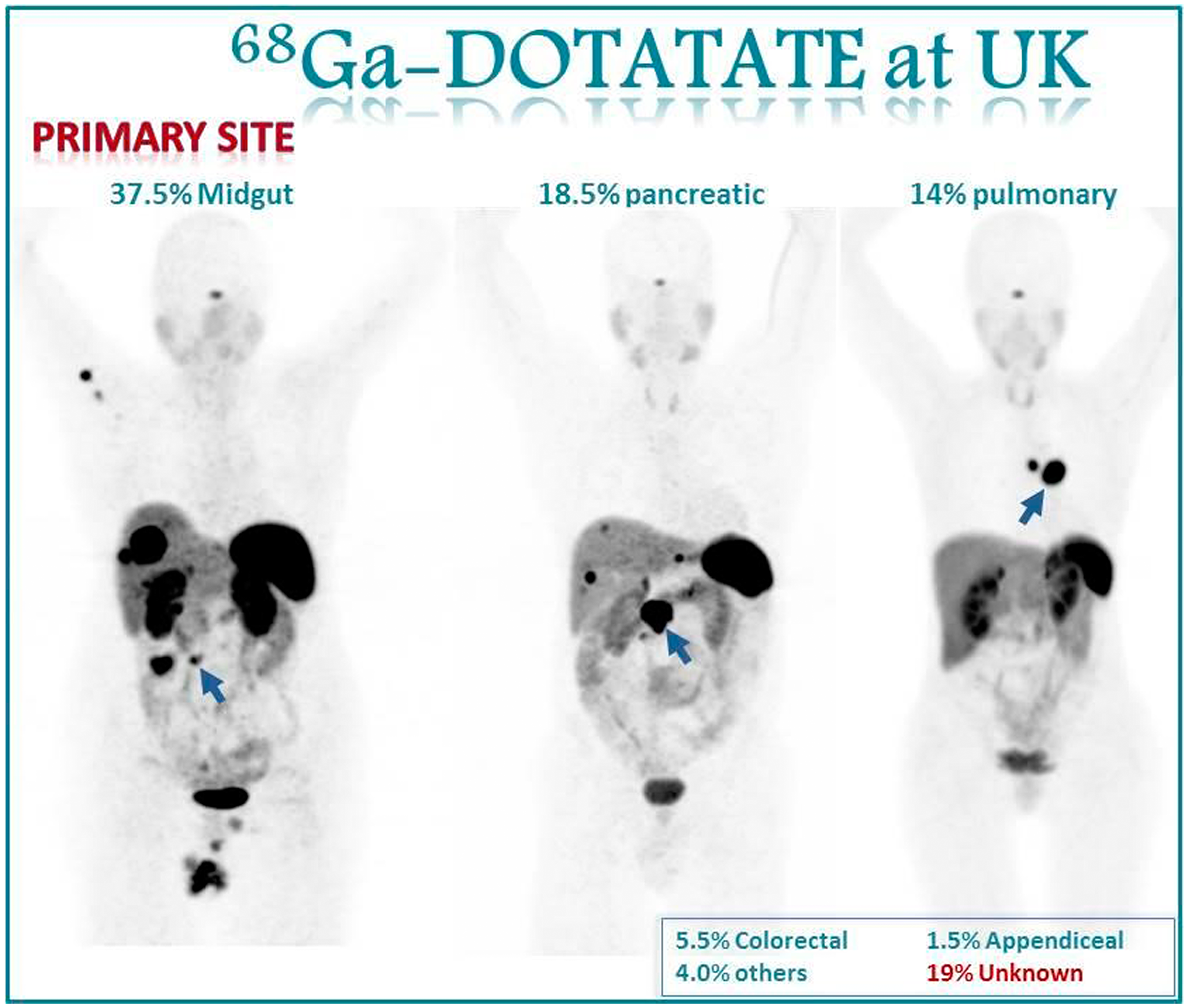 Figure 1: Images show the primary site distribution in our population. Among our first 200 patients who underwent gallium-68 DOTATATE PET/CT scans, 37.5%were midgut primary, 18.5% were pancreatic, and 14% were pulmonary primary. 19% of our cases did not have a primary site identified prior to PET/CT scan. Figure 1 gives examples of how primary midgut, pancreatic and thoracic NETs appear on gallium 68 dotatate imaging.

We performed analyses to determine if gallium-68 DOTATATE imaging could identify primary tumors that were otherwise deemed NET of unknown primary. For the purpose of the study we defined the unknown primary as a tumor of whose origin was not established after CT and or MRI scan, upper GI endoscopy and colonoscopy. Within the cohort, 38 patients were diagnosed with NET of unknown primary, and the gallium-68 DOTATATE imaging located primary tumors in 17 of 38 (44%) patients. Figure 2. Images demonstrate PET MIP images and fused PET/CT axial, sagittal, and coronal images of a case example of gallium-68 DOTATATE identifying unknown primary site. A 70 year old female patient presented to the emergency department with abdominal pain. Contrast CT of the abdomen and pelvis showed an irregular mesenteric mass and no primary identified. Gallium-68DOTATATE PET/CT demonstrated an avid mesenteric mass and identified an avid ileal primary. Subsequently the patient underwent exploratory laparotomy with small bowel resection and mesenteric node dissection. Pathological examination revealed a well differentiated G2 neuroendocrine tumor. This case highlights capability of gallium 68-dotatate imaging in locating the primary tumor which was otherwise missed in anatomic scans (Contrasted CT scan). 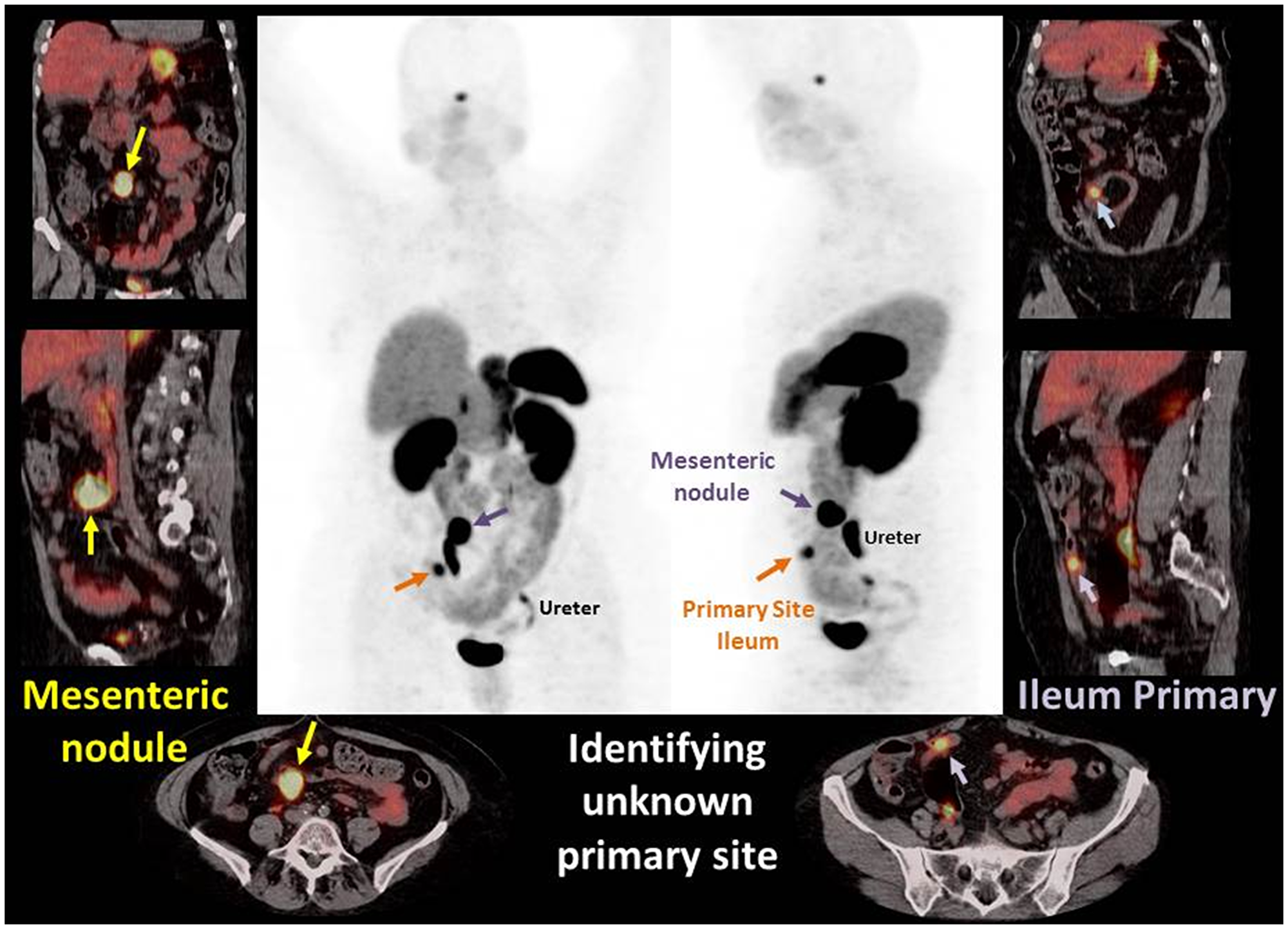 Figure 3 provides an illustrated case study of impact of gallium- 68 DOTATATE on the management. A 69 year old female patient had small bowel well differentiated neuroendocrine tumor metastatic to liver and peritoneum. Gallium- 68 DOTATATE showed intensely avid metastatic focus at the proximal costovertebral end of the left 1st rib (orange arrows), which on clinical correlation was found to cause pain. Of note this lesion was missed on CT scan. Case was discussed in multidisciplinary conference and consensus was to proceed with external beam radiation for symptom control. Gallium- 68 DOTATATE PET/CT scan 2 months after completing radiation showed a 55% decrease in uptake (SUVmax 7.4 versus 16.5). On the follow up visit patient reported resolution of rib pain after radiation. Gallium 68 dotatate scan was able to pick up rib metastatic lesion and help us formulate plan for palliative external beam radiation resulting in symptom alleviation. 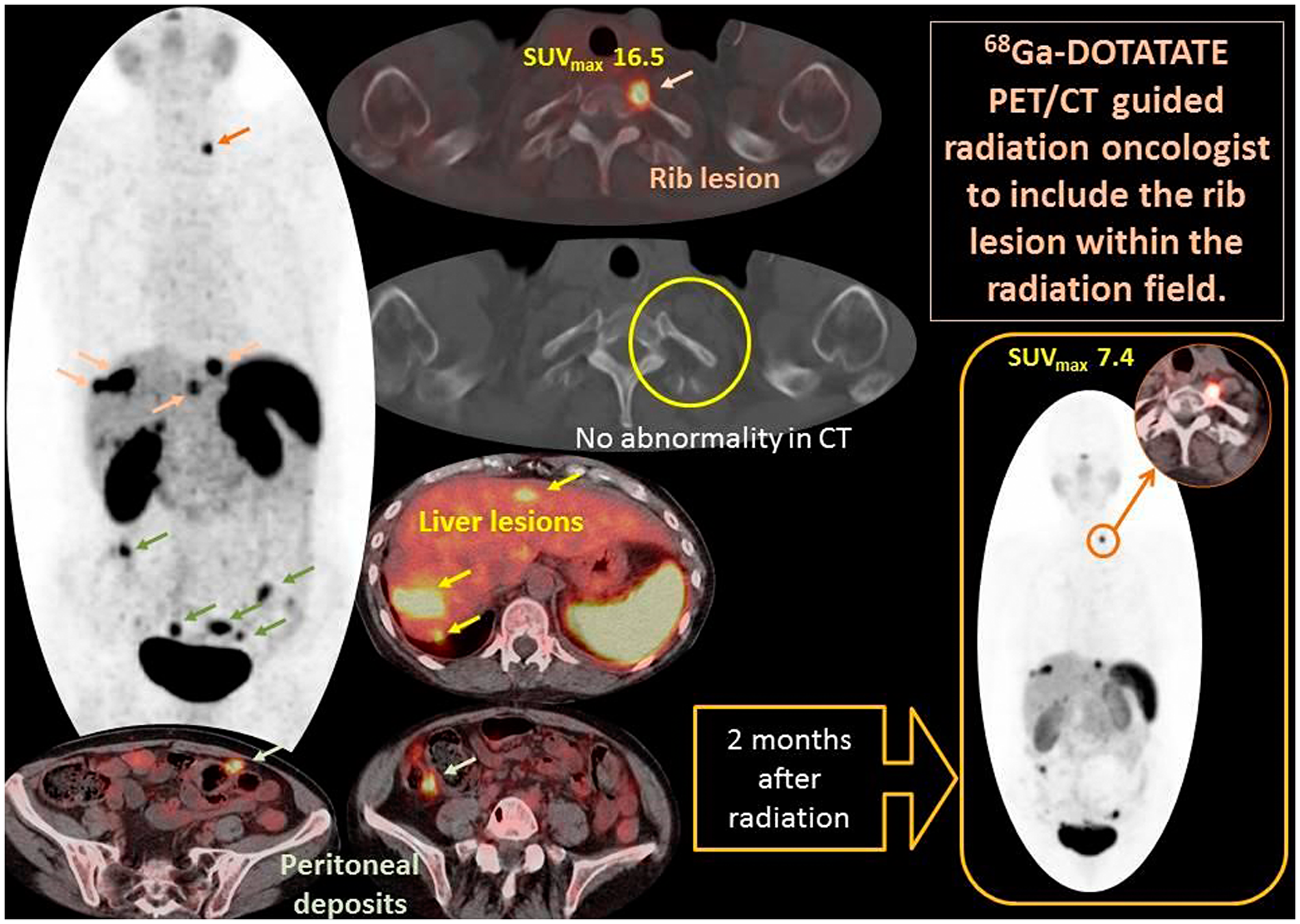 Figure 3: Demonstrates PET MIP image (Central) and fused PET/CT axial images of a case example of gallium- 68 DOTATATE that influenced and guided management. A 69 year old female patient had small bowel well differentiated neuroendocrine tumor metastatic to liver and peritoneum. Gallium- 68 DOTATATE showed intensely avid metastatic focus at the proximal costovertebral end of the left 1st rib (orange arrows), which on clinical correlation was found to cause pain. Case was discussed in multidisciplinary conference and consensus was to proceed with external beam radiation for symptom control. Gallium- 68 DOTATATE PET/CT scan 2 months after completing radiation showed a 55% decrease in uptake (SUVmax 7.4 versus 16.5). On the follow up visit patient reported resolution of rib pain after radiation. Gallium 68 dotatate scan was able to pick up rib metastatic lesion and help us formulate plan for palliative external beam radiation resulting in symptom alleviation.

We also investigated the correlation between somatostatin receptor avidity with the gallium-68 DOTATATE scan and the Ki 67 index as noted on histopathology. Since there was a discordance between the Standardized Uptake Value (SUV) of primary versus metastatic lesions, we focused on the hepatic metastatic lesions to utilize a homogeneous study cohort. Subgroup analysis of mean SUV for hepatic metastatic lesions revealed an uptake of 37.3 for G1 (n = 20) as compared to 32.3 for G2 (n = 37) and 17.46 for G3 (n = 5). Table 2 shows the tumor grade and median SUV of hepatic metastasis with Ga-68 DOTA imaging. Data is suggestive of higher-grade tumor correlating with lower mean SUV. This is due to reduced somatostatin receptor density as tumor grade increases.

Table 3: No meaningful difference in the mean SUV was noted in hepatic metastasis regardless of presence or absence of systemic long acting somatostatin analogs

Limitations of our study include the retrospective design, yet we included the consecutive initial 200 NET patients who underwent 68Ga-DOTATOC PET/CT in our institution to prevent selection bias in our data. For sub group analysis we were limited by the small sample size and therefore slightly underpowered study which made it difficult to demonstrate statistically significant differences, however clinically relevant trends were noted as mentioned above.

Our study was approved by the Institutional Review Board (IRB) and is Health Insurance Portability And Accountability Act (HIPAA) compliant with the consent form waiver. We retrospectively reviewed our first 200 clinical NET patients who underwent gallium-68 DOTATATEPET/CT since FDA approval in June 2016. These patients were managed at University of Kentucky’s Markey Cancer Center from December 2016 to December 2017. Electronic medical records were screened for medical history, pathological diagnosis, radiological data and pertinent laboratory values. We did a subgroup analysis to determine if gallium-68 DOTATATE imaging could identify primary tumors that were otherwise deemed NET of unknown primary. We also investigated the correlation between somatostatin receptor avidity with the gallium-68 DOTATATE scan and the Ki 67 index as noted on histopathology. We evaluated the effects of long-acting systemic somatostatin analog (LAR) on the SUV as a subgroup analysis.

According to our clinical protocol, all of our patients are instructed to fast for 4–6 hours and avoid strenuous activity during the 24 hours prior to a scan. Weight based dosage of gallium-68 DOTATATE (1.998 Mbq/kg body weight to a maximum of 259 Mbq) was administered intravenously. After an average of 60 minutes uptake, both PET and CT images were acquired on a 64-detector PET/CT system (Biograph mCT, Siemens Medical Solutions, USA), from vertex to mid-thigh. PET acquisition was performed for 5 minutes per bed position with a 500 mm field of view (FOV), and 168 × 168 matrix. Our institution uses 5 minutes per table position to improve the image statistics, signal to noise, resolution, and overall image quality. We did not observe any significant drop in SUV for our patient population. PET images were reconstructed with an iterative algorithm (ordered-subset expectation maximization; 2 iterations, 8 subsets). CT based attenuation correction and image registration was performed as well. Data required for quantitative analysis and uptake value measurements including patient weight, time of injection, uptake time, and injected activity (syringe activity prior to injection – residual syringe activity after injection) were added to scanning information. Radiolabeling and quality control of gallium-68 DOTATATE were performed by our local radio-pharmacy according to the manufacturer guidelines to avoid any errors or variations.

We deem the gallium-68 DOTATATE PET/CT to be central in the management of NET patients, that the scan can help in detecting the site of a NET that was previously unknown, and also support tumor grade analysis (low grade vs high grade NETs) and therefore tumor management.

We wish to thank the Markey Cancer Center Research Communication Office for their assistance in graphic design and editorial support.

This research was supported by the Biostatistics and Bioinformatics Shared Resource Facility of the University of Kentucky Markey Cancer Center (P30CA177558).