High morbidity and mortality of cancer, especially colorectal cancer (CRC), in diabetic patients have been reported. In this study, we investigated the relationship between the presence of diabetes mellitus (blood hemoglobin A1C was 6.5% or higher at the time of diagnosis of CRC) and the progression and liver metastasis of CRC. Histopathological findings in the primary lesions, which were preferential to diabetes-complicated CRC (DM-CRC) and the liver metastasis, were also investigated. Of the 473 CRC patients who underwent curative surgical resection, 148 (31%) had diabetes. In DM-CRC cases, the stage was more advanced, with more cases in stage IV or postoperative disease recurrence. Histopathological findings correlated with liver metastasis in DM-CRC, including budding grade, perineural invasion, and myxomatous tumor stroma, and all were highly correlated with the stage. Additionally, myxomatous stroma showed the strongest correlation with liver metastasis in multivariate analysis. Myxomatous stroma in stage III cases correlated with liver recurrence. The myxomatous stroma was abundant in biglycan protein and contained numerous CD90-positive mesenchymal stem cells (MSCs). In human colon cancer cell line HT29, biglycan expression was induced by high sugar concentration, fatty acids, and insulin, and its contact co-culture with MSCs resulted in enhanced stemness and epithelial-mesenchymal transition phenotype. Thus, DM-CRC has higher malignant phenotypes compared to non-DM-CRC, and the involvement of diabetes-induced biglycan may act as a pathogenic factor.

Diabetes mellitus is a social problem in developed countries due to its frequency and the diversity and severity of its complications. It is estimated that there are about 463 million people with diabetes between the age of 20 and 79 in the world and about 7.39 million in Japan [1]. In recent years, attention has been focused on the relationship between diabetes and cancer, with the latter being one of the various complications observed in patients with diabetes. The incidence of cancer was reported to be higher in diabetic groups than in non-diabetic groups, and the risk of carcinogenesis is increased in early stages of glucose metabolism disorders [2].

People with diabetes have an increased risk of carcinogenesis in most organs [3], including liver, pancreas, colorectum, stomach, breast, lung, oral cavity, and endometrium, and increased risk of associated mortality [2–4]. In particular, pancreatic, liver, and colon cancer are often associated with diabetes [3, 5, 6]. Smoking, diabetes, obesity, and lean meat diet are known as carcinogenic risks in colorectal cancer (CRC) [7]. The meta-analysis of 15 studies found that among 2,593,935 patients with CRC, those with diabetes had a hazard ratio of 1.30 and a mortality rate of 1.26 compared to the non-diabetic patients [8]. Conversely, the incidence of diabetes in CRC is 5–8% [9, 10].

Association of diabetes with liver metastasis in CRC cases

Clinicopathological factors were compared among the 473 CRC cases that had undergone surgical resection (Table 1). There was no difference in local progression (pT) between the two groups; however, lymph node metastasis (pN) and pStage were more advanced in diabetes mellitus-complicated CRC (DM-CRC). In particular, distant metastases were frequently observed in DM-CRC for all liver, peritoneum, and lung metastases.

1Blood hemoglobin A1C was equal or higher to 6.5% at the time of colorectal cancer (CRC) diagnosis. 2Clinicopathological classification is according to UICC-TNM Classification [61]. Differentiated type, pap, tub1, tub2; Undifferentiated type, por, sig, muc; pT2, tumor invades into muscularis propria layer; pT3, tumor invades into subserosa or adventitia; pT4, tumor exposes to the serosal surface or invades other organ; pN0, no lymph node metastasis; pN1–2, metastasis to regional lymph nodes; stage I–II, cases invaded into the submucosal layer or above; stage III, any case with lymph node metastasis; stage IV, any case with or without lymph node metastases but with distant metastases. 3Histopathological findings are according to Japanese Classification of Colorectal Carcinoma [62]. Budding grade 1, number of cancer nest of 5 or less cancer cells at the invasive front is 0–4/mm2; Budding grade 2, 5–9/mm2; Budding grade 3, 10/mm2 or more; Pn: 0, no perineural invasion and 1, presence of perineural invasion; Ly: 0, no lymphatic invasion and 1, presence of lymphatic invasion; V: 0, no venous invasion and 1, presence of venous invasion; Ex: 0, no extramural cancer deposits without lymph node structure and 1, presence of extramural cancer deposits without lymph node structure. 4P value was calculated by Fisher’s exact test or Chi2 test. 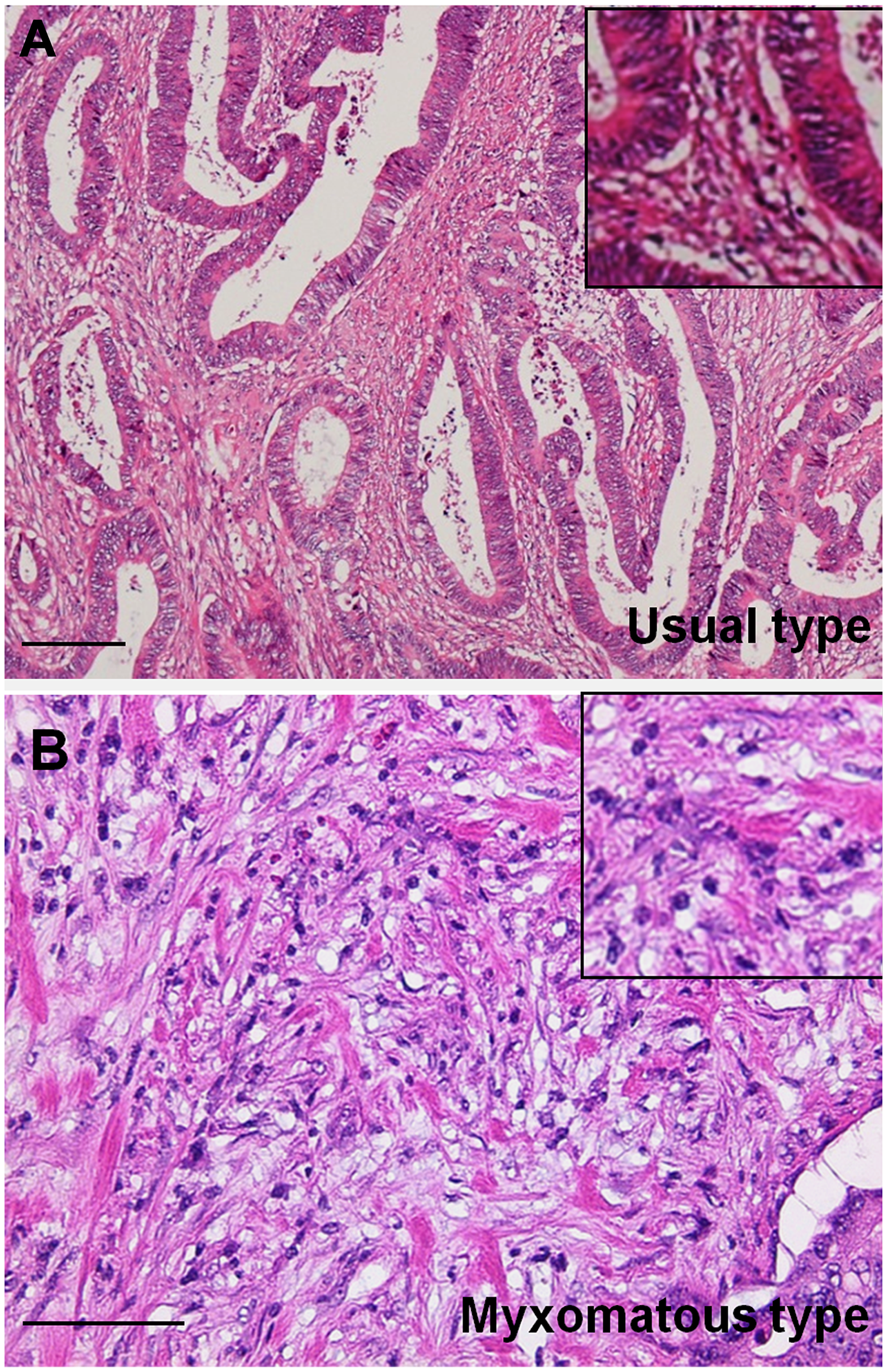 1Clinicopathological classification is according to UICC-TNM Classification [61]. Stage I–II, cases invaded into the submucosal layer or above; stage III, any cases with lymph node metastasis; stage IV, any case with or without lymph node metastases but with distant metastases. 2Histopathological findings are according to Japanese Classification of Colorectal Carcinoma [62]. Budding grade 1, number of cancer nest of 5 or less cancer cells at the invasive front is 0–4/mm2; Budding grade 2, 5–9/mm2; Budding grade 3, 10/mm2 or more; Pn0, no perineural invasion; Pn1, presence of perineural invasion. 3P value was calculated by Chi2 test.

1Pathological stage is according to UICC-TNM Classification [61]. 2Distance of subserosal or adventitial invasion from the lower edge of muscularis propria layer (mm). 3Histopathological findings are according to Japanese Classification of Colorectal Carcinoma [62]. 4Hyperplastic change in the mucosa adjacent to cancer [63, 64]. 5P value was calculated by multiple regression analysis using EZR program [60]. 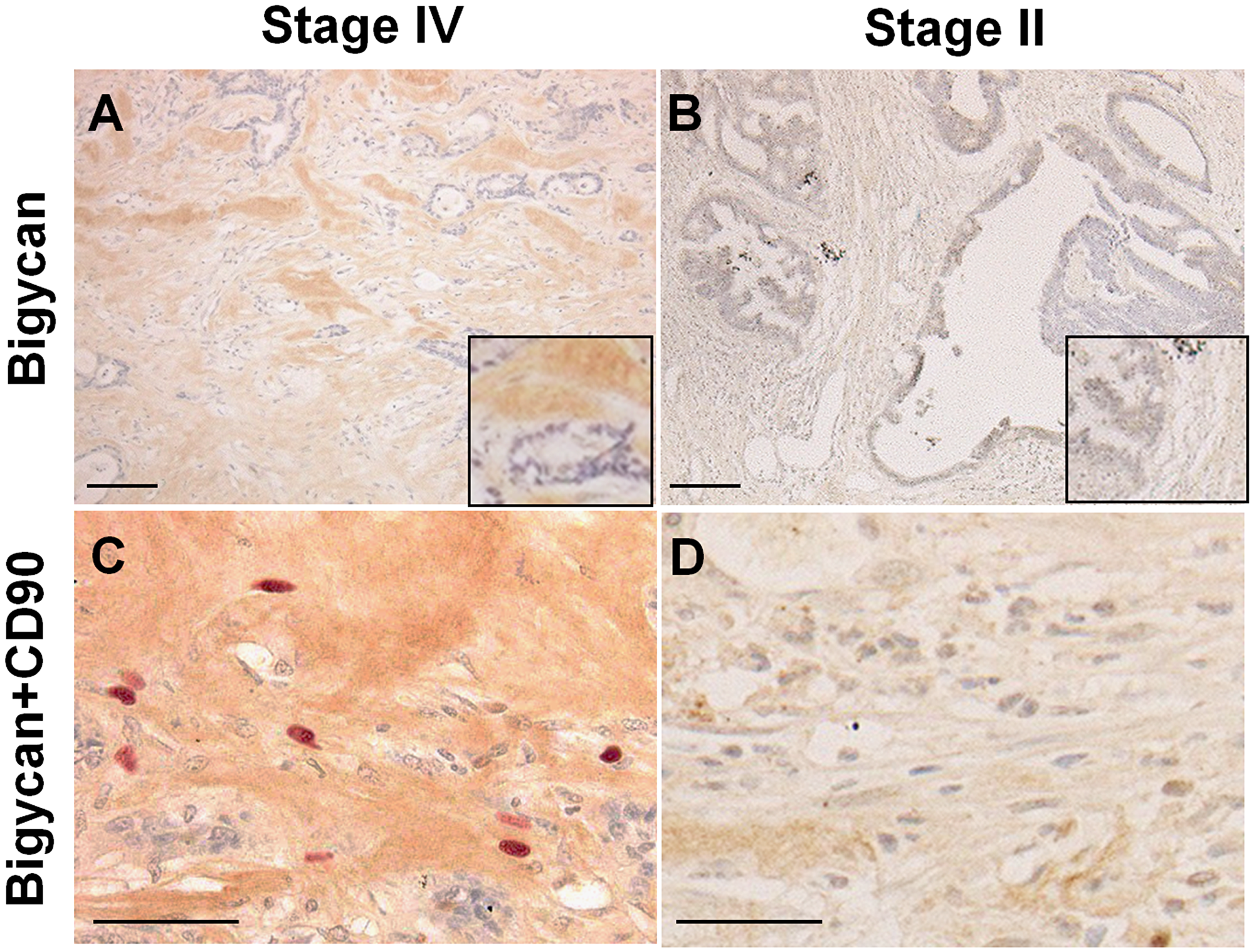 1When the biglycan expression levels were higher than those in the mucosa adjacent to cancer, it was judged as overexpression positive. 2P value was calculated by Fisher’s exact test.

1When the biglycan expression levels were higher than those in the mucosa adjacent to cancer, it was judged as overexpression positive. 2P value was calculated by Fisher’s exact test. 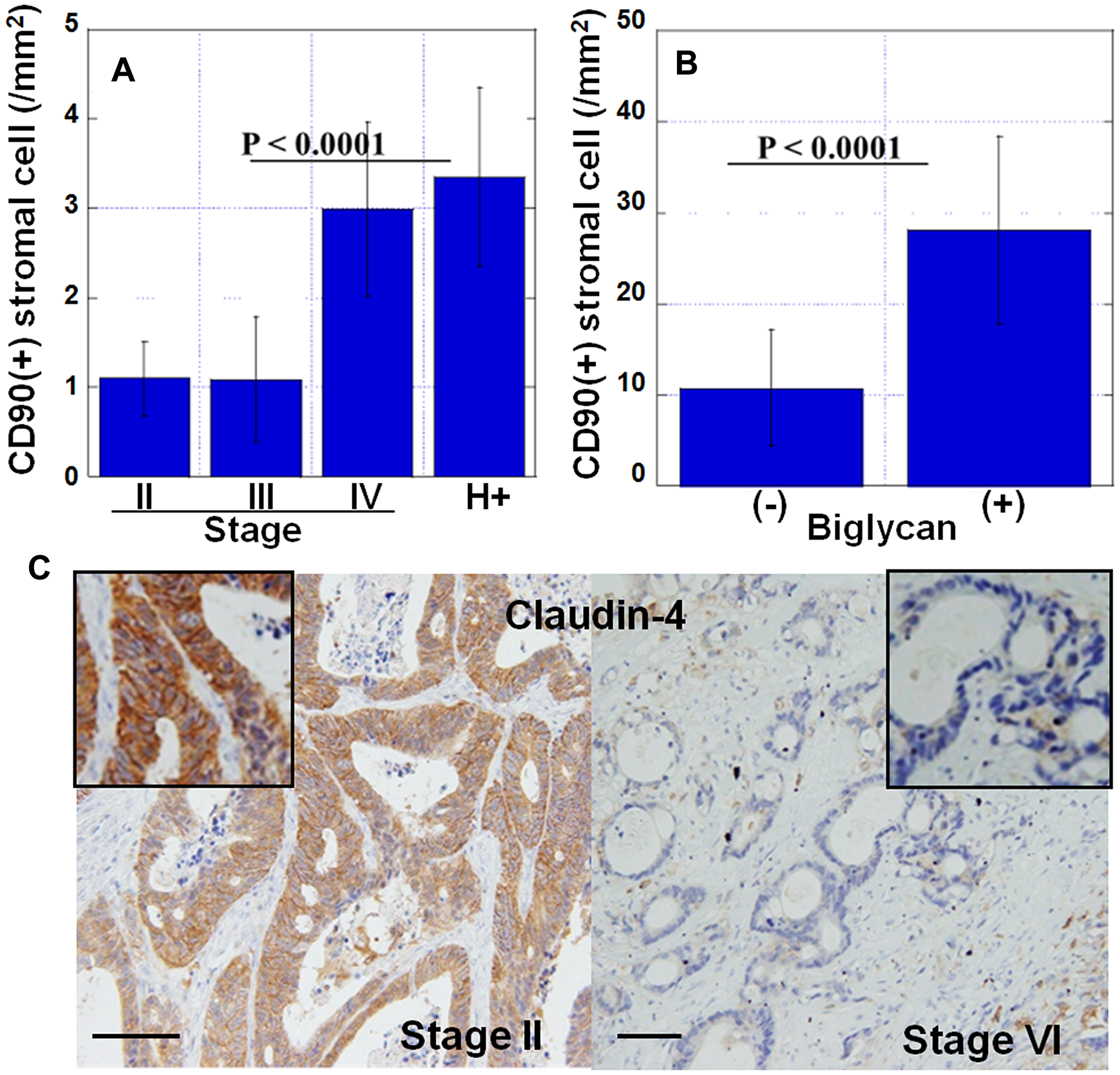 Relationship between biglycan and epithelial-mesenchymal transition (EMT) in HT29 cells 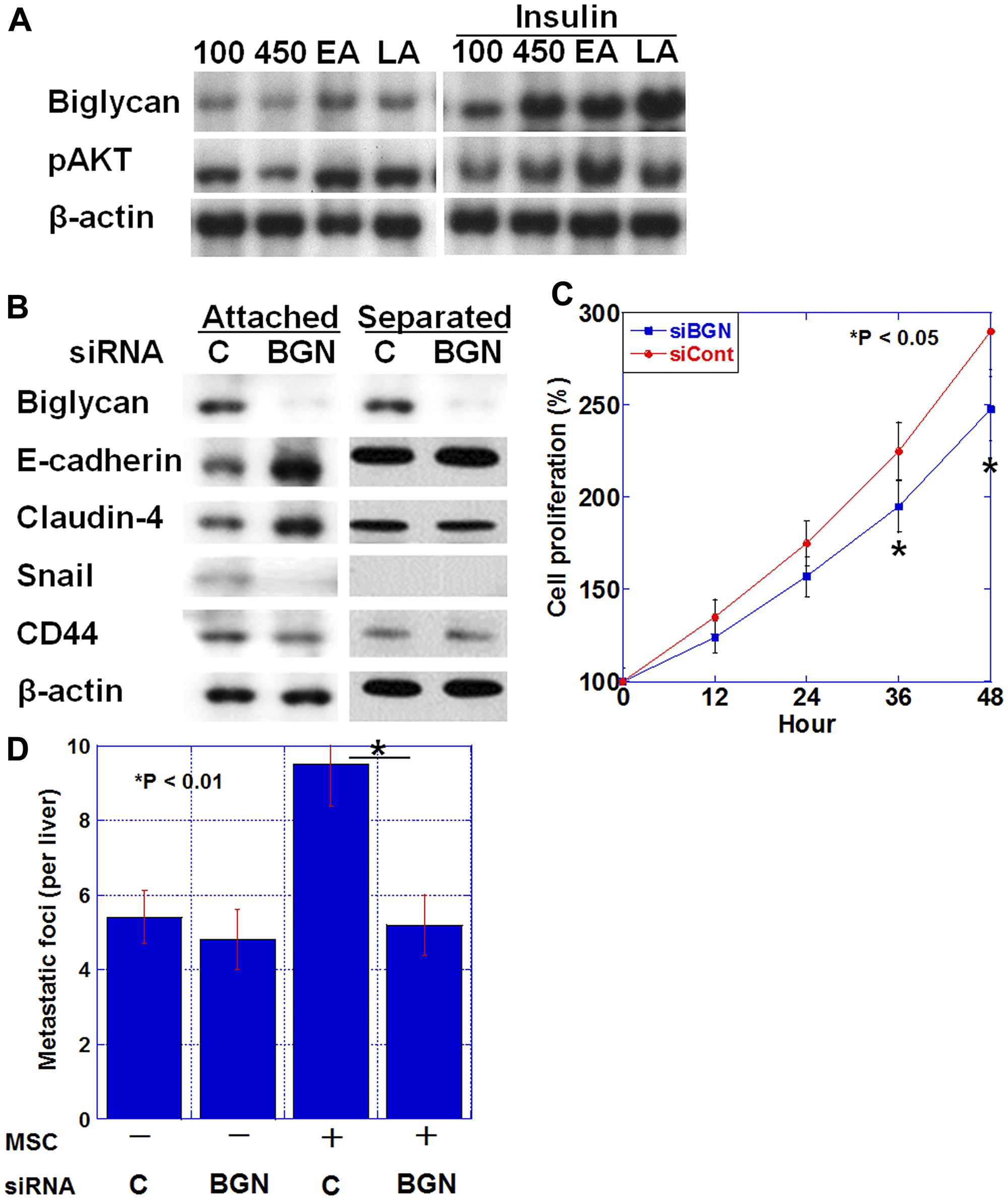 Alteration in the expression of EMT-associated proteins was examined when HT29 cells were co-cultured with human MSCs and biglycan was knocked down (Figure 4B). In co-culture conditions where HT29 cells contacted MSCs, biglycan knockdown increased E-cadherin and Claudin-4 expression and decreased Snail and CD44 expression, indicating a reduced EMT phenotype. In contrast, when MSC was placed in an insert chamber and co-cultured with HT29 cells in a non-contact condition, the above alterations in expression were not observed. Biglycan knockdown also decreased cell proliferation in HT29 cells (Figure 4C).

In this study, myxomatous tumor stroma was observed as a histopathological finding that is frequently observed in CRC with diabetes and was shown to have a high correlation with liver metastasis. The myxomatous stroma was rich in extracellular matrix containing biglycan and CD90-positive MSCs.

Biglycan is a component of the cartilagenous matrix [23]. Biglycan is soluble and causes inflammation and autophagy [24, 25]. The stromal mucin-like findings of the myxomatous stroma upon hematoxylin & eosin staining was considered to be due to the nature of the biglycan cartilaginous matrix.

It has been reported that biglycan is overexpressed in various cancers and correlates with progression, metastasis, and angiogenesis of gastric cancer, endometrial cancer, prostate cancer, and bladder cancer [26–31]. In melanoma, biglycan results in stromal stiffness and integrin activation [32]. Biglycan secreted from tumor vascular endothelial cells promotes invasion and metastasis of cancer cells through activation of NFkB and ERK1/2 [33, 34].

Biglycan expression is increased 6-fold in CRC compared with that in normal mucosa [35]. Biglycan expression also increases with progression of CRC and liver metastasis and correlates with recurrence and reduced survival [19, 20]. These findings support the high correlation between biglycan and CRC liver metastasis that we found in the present study.

In this study, diabetes was defined as a blood hemoglobin A1C of 6.5% or higher at the time of CRC diagnosis. It was not possible to examine the timing of diabetes diagnosis or the treatment. It is thought that the role of diabetes on the malignant phenotype of CRC could be examined in more detail by examining the duration of diabetes, the control status of blood sugar, and the treatment content. However, blood hemoglobin A1C 6.5% at the time of CRC diagnosis was shown to be a higher blood glucose level than that at least in healthy individuals, which is considered as a potential indicator of diabetic metabolic disorder. The biglycan overexpression, which is thought to be associated with hyperinsulinemia, might also be considered as evidence of diabetes-related metabolic disorders. In future, it would be desirable to investigate the relationship with cancer, taking into account more detailed studies on diabetes, which will increase the importance of our data.

In conclusion, our study suggests that diabetes promotes liver metastasis of CRC via biglycan, which induces cancer stemness and EMT from interaction with MSCs. This novel mechanism is believed to promote cancer malignancy in various cancers complicated with diabetes. The results of our study indicate the importance of diabetes management in malignant tumors in diabetes patients. And it is emphasized the significance of biglycan as a hopeful therapeutic target in malignant tumors with diabetes.

We reviewed the pathological diagnosis and clinical data of 473 patients with surgically resected CRC, diagnosed at the Department of Molecular Pathology, Nara Medical University from 2006 to 2015. We used all cases above for analysis in this study without any selection. As written informed consent was not obtained, any identifying information was removed from the samples prior to analysis, in order to ensure strict privacy protection (unlinkable anonymization). All procedures were performed in accordance with the Ethical Guidelines for Human Genome/Gene Research enacted by the Japanese Government and were approved by the Ethics Committee of Nara Medical University (Approval Number 937).

For the attached co-culture of HT29 and hMSC-BM cells, HT29 cells (1 × 104) were mixed with hMSC-BM cells (2 × 103) and cultured for 24 h in a 24-well dish. For the separated co-culture of the two cell lines, HT29 (1 × 104) cells were seeded on the bottom of a 24-well dish and hMSC-BM cells (2 × 103) were seeded in an insert with 3 μm-pore (Thermo Fisher Scientific, Waltham, MA, USA) for 24 h. HT29 cells were pretreated with the siRNA for biglycan or control. HT29 cells were separated from the MSCs with EasySep Human EpCAM Positive Selection Kit II (Veritas Corp., Tokyo, Japan) and were subjected to further examination.

BALB/c nude mice (4-weeks-old, male) were purchased from SLC Japan (Shizuoka, Japan). The mice were maintained according to the institutional guidelines approved by the Committee for Animal Experimentation of Nara Medical University, in accordance with the current regulations and standards of the Ministry of Health, Labor, and Welfare (Approval number 12262).

To establish a liver metastasis model, HT29 cells (1 × 106) were inoculated into the spleen of nude mice. Then, with five mice in each group, pretreatment was carried out with siRNA for human biglycan for 24 h and/or co-inoculation with hMSC-BM cells (2 × 105 cells). The livers were sectioned into 2-mm-thick slices, and metastatic foci were counted using a stereomicroscope (Nikon, Tokyo, Japan).