Purpose: Recognizing the prognostic significance of lymph node (LN) involvement for cervical cancer, we aimed to identify genes that are differentially expressed in LN+ versus LN- cervical cancer and to potentially create a validated predictive gene signature for LN involvement.

Materials and Methods: Primary tumor biopsies were collected from 74 cervical cancer patients. RNA was extracted and RNA sequencing was performed. The samples were divided by institution into a training set (n = 57) and a testing set (n = 17). Differentially expressed genes were identified among the training cohort and used to train a Random Forest classifier.

Results: 22 genes showed > 1.5 fold difference in expression between the LN+ and LN- groups. Using forward selection 5 genes were identified and, based on the clinical knowledge of these genes and testing of the different combinations, a 2-gene Random Forest model of BIRC3 and CD300LG was developed. The classification accuracy of lymph node (LN) status on the test set was 88.2%, with an Area under the Receiver Operating Characteristic curve (ROC-AUC) of 98.6%.

Conclusions: We identified a 2 gene Random Forest model of BIRC3 and CD300LG that predicted lymph node involvement in a validation cohort. This validated model, following testing in additional cohorts, could be used to create a reverse transcription-quantitative polymerase chain reaction (RT-qPCR) tool that would be useful for helping to identify patients with LN involvement in resource-limited settings.

Patient and cervical cancer characteristics are included in Table 1 with 54% of patients with lymph node metastases. Based on primary tumor pathology, 86% of patients had squamous cell carcinoma, and the remainder had either adenocarcinoma or adenosquamous.

Table 1: Characteristics of patients with cervical cancer in the three cohorts–breakdown of patient groups by LN status, histology, and tumor stage

Fold-change is represented on linear scale. Genes are ranked by increasing FDR. 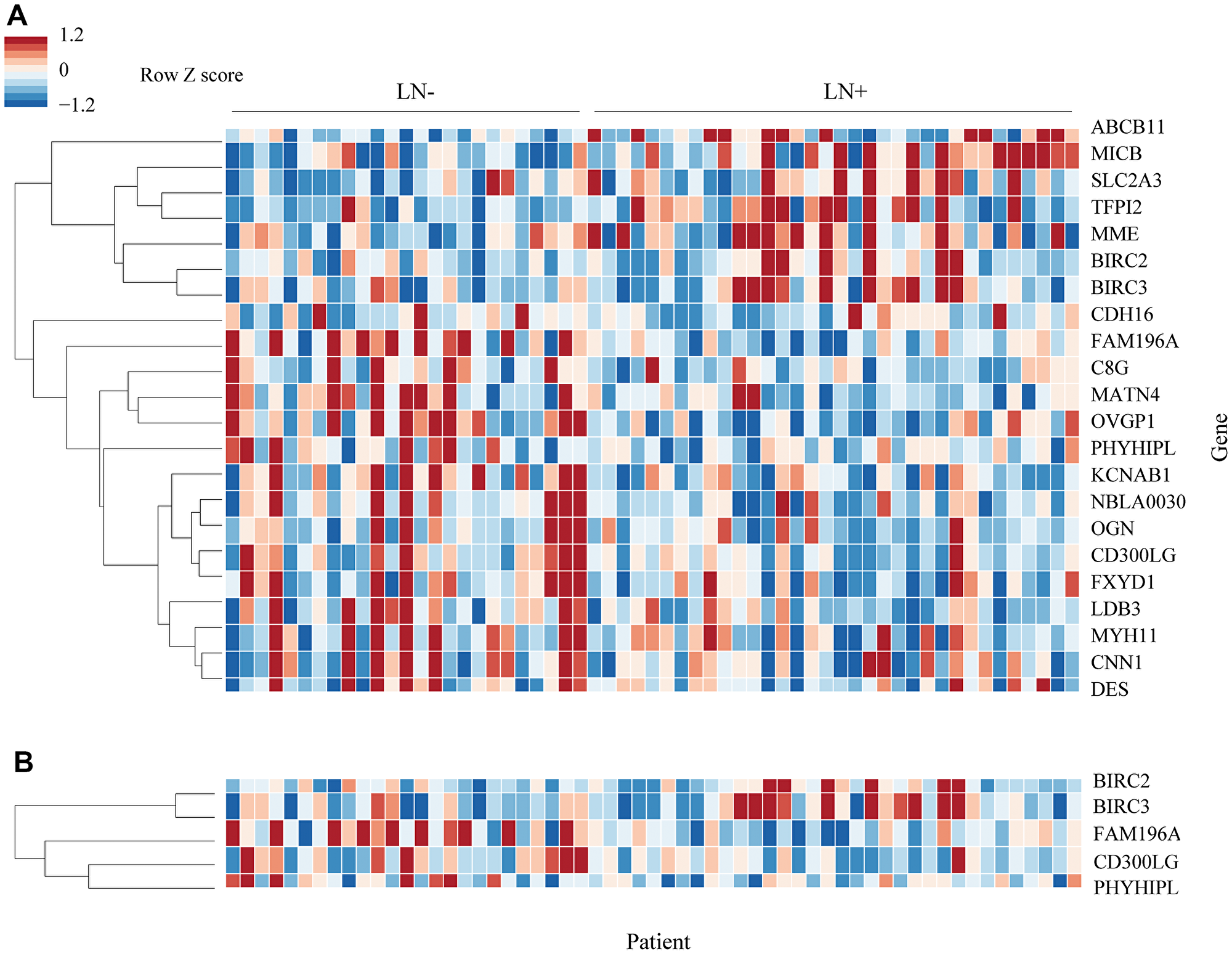 Out of the 22 differentially expressed genes, 5 were identified as potential candidates for the predictive model using forward selection: BIRC2, BIRC3, CD300LG, FAM196A, and PHYHIPL. 2 of these genes, FAM196A and PHYHIPL, have very limited gene annotation or relevant clinical background and were therefore excluded from model development. The final three genes, BIRC2, BIRC3, and CD300LG, were included in the training set Random Forest model. The subset of BIRC3 and CD300LG showed the best test set accuracy, 88.2%, and was therefore selected as the final model. In the training set, BIRC3 (Baculoviral IAP Repeat Containing 3) was upregulated 1.7-fold in LN+ patients. CD300LG (Nepmucin), on the other hand, was downregulated 1.5-fold in LN+ patients. Table 3 compares the accuracy of the various models tested, while Figure 2 shows the ROC curve comparison of the 4 models. Figure 3 shows the Random Forest decision surface and a decision tree using the 2 genes with the training set.

Table 3: Comparison of lymph node prediction accuracies of potential models – each combination of the top 3 genes was used to develop a Random Forest model 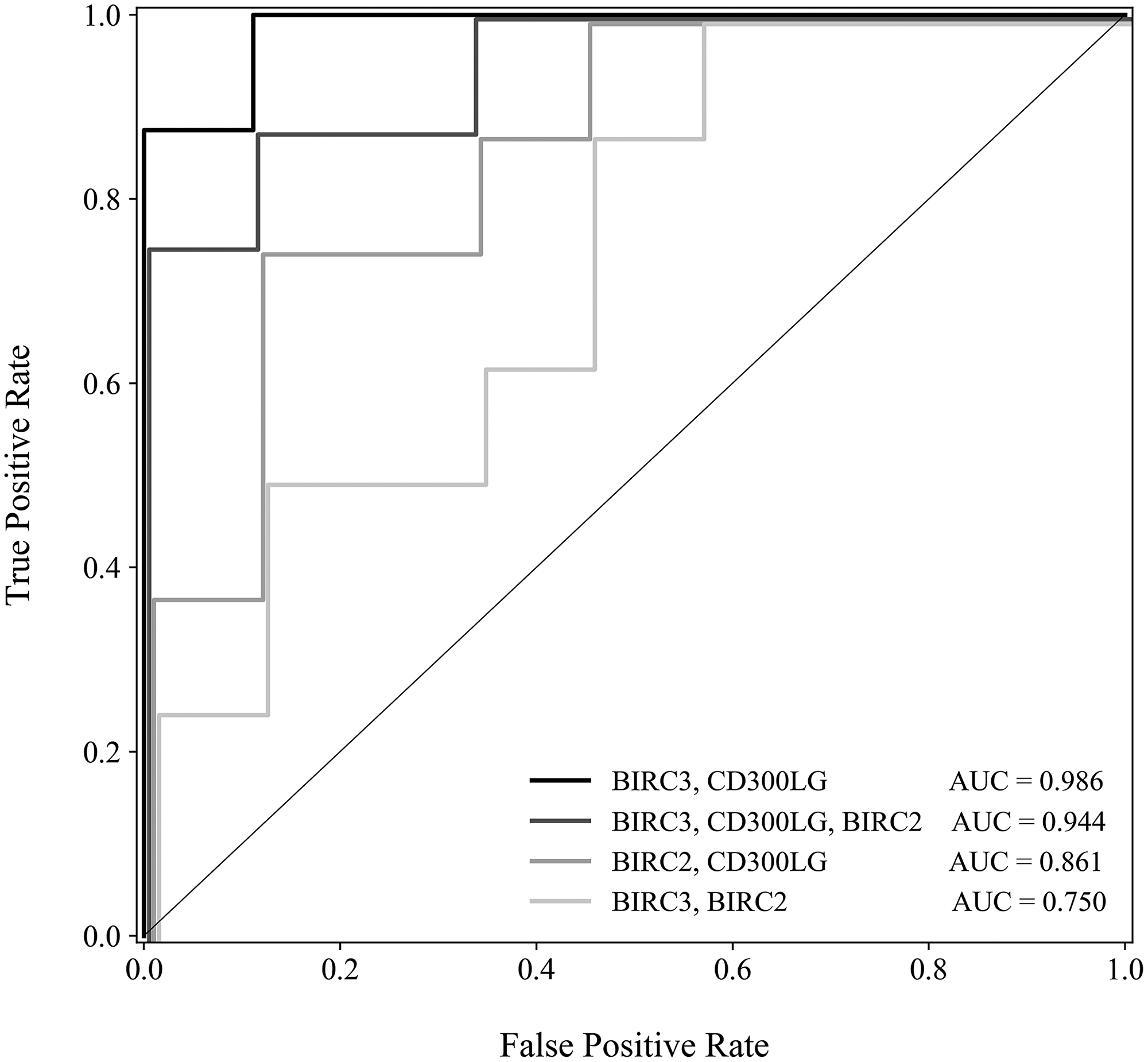 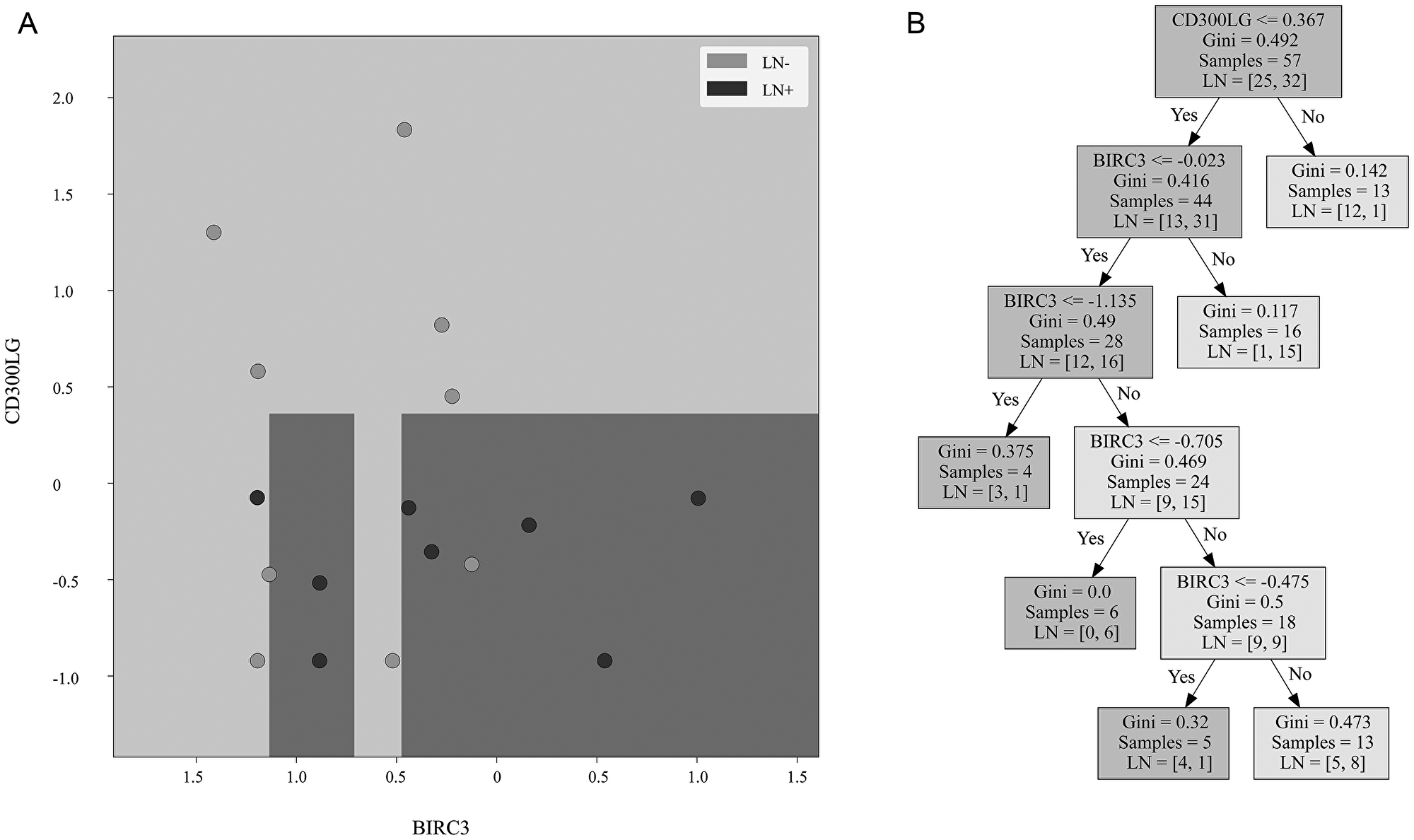 Alternative models were developed using the final 2 genes with different algorithms, but these models showed slightly lower performance than the Random Forest model. A Support Vector Machine with Radial Basis Function (RBF) kernel had 94.4% ROC-AUC, and a Gaussian Naïve Bayes model had 84.7% ROC-AUC.

Cervical cancer lymph node involvement can be determined by surgical staging or imaging, such as FDG-PET/CT or MRI. Several studies suggest that lymph node status on FDG-PET is a more significant predictor of disease outcome than clinical FIGO stage [6–8]. The presence of lymph nodes also influences treatment decisions, such as the need for adjuvant chemoradiation after surgery or the extent of the radiation field and dose for definitive chemoradiation treatment. Currently, no simple lab test that accurately predicts cervical cancer lymph node involvement exists. Additionally, the incidence of cervical cancer is increasing in developing countries with limited health care resources for surgery, imaging, and treatment. A simple pathologic tool that could help stratify patients based on predicted lymph node status could be particularly beneficial for determining the best utilization of treatment resources. If treatment or radiation resources are particularly limited, knowing which patients have no lymph nodes could help identify the patients to treat with a definitive or curative approach versus those to treat more palliatively. Alternatively, if imaging resources are limited but surgical and/or radiation resources are available, it might be that patients with a biomarker predicting for lymph nodes undergo surgical lymph node resection and/or extended field radiation or additional chemotherapy.

In benchmarking studies, RNA-seq has been shown to outperform microarray for both sensitivity and specificity [13–17], and therefore gene signatures derived from RNA-seq studies are likely to have greater extrinsic validity compared with those derived from microarray studies. RNA-seq is a direct high-throughput sequencing method that does not rely on hybridization, in contrast to microarray.

Among the 20 proteins corresponding to the differentially expressed genes with UniProt Gene Ontology annotation, 18 have annotation of integral membrane component, extracellular, ion/solute transport, or surface receptor (http://www.geneontology.org/). Considering that membrane proteins have key roles in the cellular changes that contribute to adhesion, epithelial-mesenchymal transition (EMT), and metastasis, these genes could potentially be linked to lymph node involvement.

BIRC3, one of the significant genes of our model, has an important role in the inhibition of apoptosis and could be related to the survival of cervical cancer cells during metastasis. In The Cancer Genome Atlas (TCGA) comprehensive characterization of cervical cancer, BIRC3 was highlighted for showing amplification events in 17% of tumors [18]. These amplification events were enriched in a cluster of primarily squamous tumors, which is similar to our dataset, composed of nearly all squamous tumors. While BIRC3 and CD300LG may play a role in the pathophysiology of cervical cancer metastasis, our gene expression study simply suggests a correlative connection. Further study of these genes in the context of cervical cancer progression is warranted.

A gene signature composed of two genes offers important advantages compared to larger gene signatures for the purpose of prediction. A smaller model is less likely to overfit to the training cohort, and its operation is less computationally expensive. A smaller gene set, moreover, may focus on fewer pathways or networks, potentially contributing to a more coherent interpretation of the biological factors involved. Additionally, a small panel is easier to assay in follow-up studies and could possibly translate into a more tractable clinical test, such as a reverse transcription-quantitative polymerase chain reaction (RT-qPCR) assay.

While our study has several unique and valuable findings, it also has some limitations. Our study included a range of stages and histologies, so stage IV and adenocarcinoma are included in more limited numbers. Patients were only assessed for lymph node status and were not uniformly followed for disease outcomes. The significant genes of our study have limited overlap with existing cervical cancer microarray studies.

Our study shows that lymph node involvement in cervical cancer can be predicted with RNA-seq data, and our limited gene lymph node predictive signature shows high predictive accuracy when evaluated in a separate cohort. Our study has several strengths, including the relatively large number of patients, the use of RNA-seq for the evaluation of gene expression, the validation of the predictive model with a separate cohort, and the high classification accuracy of lymph node status in the testing cohort. Further evaluating our findings in additional cohorts would be beneficial. In particular, a follow-up study involving survival data could assess the ability to predict clinical outcomes. Upon further validation, this biomarker tool that could predict lymph node involvement based on cervical tumor biopsy could be useful for risk stratification of cervical cancer patients in developing countries with limited imaging and healthcare resources.

With IRB approval 74 cervical biopsy samples were prospectively collected from cervical cancer patients, prior to the initiation of treatment or at the time of initial surgery. Inclusion criteria was for patients with known or suspected cervical cancer. If diagnostic and research biopsy were obtained at the same time and diagnostic biopsy found that the patient did not have cervical cancer, the patient and tissue sample were excluded from analysis. Additional clinical information prospectively collected included tumor stage, histology, and location of local lymph node involvement. The patient cancers mainly consist of squamous cell carcinomas (Table 1). Lymph node status was assessed by a combination of pathology (n = 24) and diagnostic FDG-PET/CT imaging (n = 50). Patients who underwent surgical assessment of lymph nodes generally had a pelvic lymph node dissection with or without para-aortic lymph node sampling. Lymph nodes were considered positive on FDG-PET/CT based on the interpretation by the nuclear medicine physicians. Clinical characteristics between LN+ and LN- patients are displayed in Table 4.

Table 4: Characteristics of patients with LN+ and LN- cervical cancer – breakdown of patient groups by histology and tumor stage

The primary tumor biopsies were collected at 3 different institutions: Stanford University (n = 47), Cancer Hospital of Shantou University Medical College (n = 10), and Santa Clara Valley Medical Center (n = 17). The tissue was collected from primary cervix tumor prior to the initiation of any therapy and was immediately put into RNAlater (Qiagen, Redwood City, California, USA). The cervical tumor samples were flash frozen in liquid nitrogen and stored at –80°C.

RNA sequencing reads were processed from raw FASTQ files and analyzed using STAR 2.3.0. Reads were filtered using the quality control program FASTQC (http://www.bioinformatics.babraham.ac.uk/projects/fastqc/) and subsequently trimmed using the FASTX-Toolkit (http://hannonlab.cshl.edu/fastx_toolkit/). The quality control plots were checked, and a file with unique reads and their corresponding counts was generated for each sample. The final processed unique reads were mapped with STAR to the human reference genome (https://code.google.com/p/rna-star/). Mapped reads were aligned and counted based on genomic annotations using Samtools (http://samtools.sourceforge.net/), and the reads were converted to counts using HTSeq (Version 0.9.1).

Genes without > 10 counts among > 7 samples (~10% of all samples) were filtered out from downstream analysis, eliminating extremely lowly expressed genes. Normalization was performed with DESeq2 using default parameters [19]. Variance Stabilizing Transformation was implemented to mitigate excessive dispersion in genes with low read counts for visualization and model development.

To determine which differentially expressed genes to include as candidates in the lymph node predictive model, the RandomForestClassifier package (Python Scikit-learn) was implemented with 1000 trees on the training set for forward selection using the greedy algorithm [20].

The final selection of candidate genes was performed in two steps. First, we excluded the genes with unknown biological function as previous data had suggested improved performance of a model by using previous knowledge about biology [21, 22]. Second, a Random Forest model was fit to all possible subsets and the model with the highest predictive accuracy for the training set was selected as the final model.