Copyright: © 2020 Kitajima et al. This is an open access article distributed under the terms of the Creative Commons Attribution License (CC BY 3.0), which permits unrestricted use, distribution, and reproduction in any medium, provided the original author and source are credited.

Objectives: To investigate neuroendocrine carcinoma (NEC) of the uterine cervix cases for MRI features and staging, as well as pathological correlations and survival.

Results: FIGO was I in 42, II in 14, III in 1, and IV in 5 patients. T2-weighted MRI showed homogeneous slightly high signal intensity and obvious restricted diffusion (ADC map, low intensity; DWI, high intensity) throughout the tumor in most cases, and mild enhancement in two-thirds. In 50 patients who underwent a radical hysterectomy and lymphadenectomy without neoadjuvant chemotherapy (NAC), intrapelvic T staging by MRI overall accuracy was 88.0% with reference to pathology staging, while patient-based sensitivity, specificity, and accuracy for metastatic pelvic lymph node detection was 38.5%, 100%, and 83.3%, respectively. During a mean follow-up period of 45.6 months (range 4.3–151.0 months), 28 patients (45.2%) experienced recurrence and 24 (38.7%) died. Three-year progression-free and overall survival rates for FIGO I, II, III, and IV were 64.3% and 80.9%, 50% and 64.3%, 0% and 0%, and 0% and 0%, respectively.

Conclusions: Homogeneous lesion texture with obvious restricted diffusion throughout the tumor are features suggestive of cervical NEC. Our findings show that MRI is reliable for T staging of cervical NEC.

Neuroendocrine carcinomas (NECs) of the female genital tract are aggressive uncommon tumors that usually involve the uterine cervix and ovaries, though are very rarely seen in the endometrium [1]. A uterine cervix NEC is rare, accounting for only 1–6% of all cervical malignancies. According to the World Health Organization (WHO) classification, neuroendocrine tumors in the uterine cervix are categorized into 4 categories; typical carcinoid, atypical carcinoid, small cell neuroendocrine carcinoma (SCNEC), and large cell neuroendocrine carcinoma (LCNEC) [2]. The WHO defines SCNEC as an undifferentiated carcinoma with cellular and nuclear features that include small-sized cells, scant cytoplasm, hyperchromatic features, finely granular and molded nuclei, and inconspicuous nuclei. On the other hand, an LCNEC is defined as undifferentiated large cells that lack the cytologic and architectural features of small cell carcinoma, and show glandular or squamous differentiation. More simply, LCNEC is a malignant tumor composed of large cells that show neuroendocrine differentiation.

Cervical NEC has a higher frequency of lymphovascular invasion, lymphatic and distal metastasis, and recurrence as compared to other subtypes of uterine cervical malignancies, e. g., squamous cell carcinoma and adenocarcinoma [3, 4]. Clinical, Papanicolaou’s smear, and cervical biopsy findings are the primary screening and diagnostic tools for cervical malignancy cases. However, findings obtained in smear and cervical biopsy analyses are insensitive and inconclusive for diagnosis of cervical NEC in some patients, due to limited sample size or tumor heterogeneity [5]. Magnetic resonance imaging (MRI) is a well-established method for diagnosis and staging of uterine cervical tumors. Should MRI results be shown informative for correct diagnosis of NEC of the uterine cervix as well as accurate staging prior to performing treatment, the modality would be considered a useful clinical tool. To the best of our knowledge, 2 different reports have been presented that include discussion of MRI characteristics of uterine cervical SCNEC [6, 7], with a small number of patients in each (n = 7 and 26, respectively), while no known reports discussing MRI findings of cervical LCNEC are available. Therefore, features of uterine cervical NEC shown by MRI are not well recognized.

The aim of this study was to identify the distinct features and staging accuracy of uterine cervical NEC, including SCNEC and LCNEC, using MRI, as well as pathological correlations. Survival of affected patients was also evaluated. 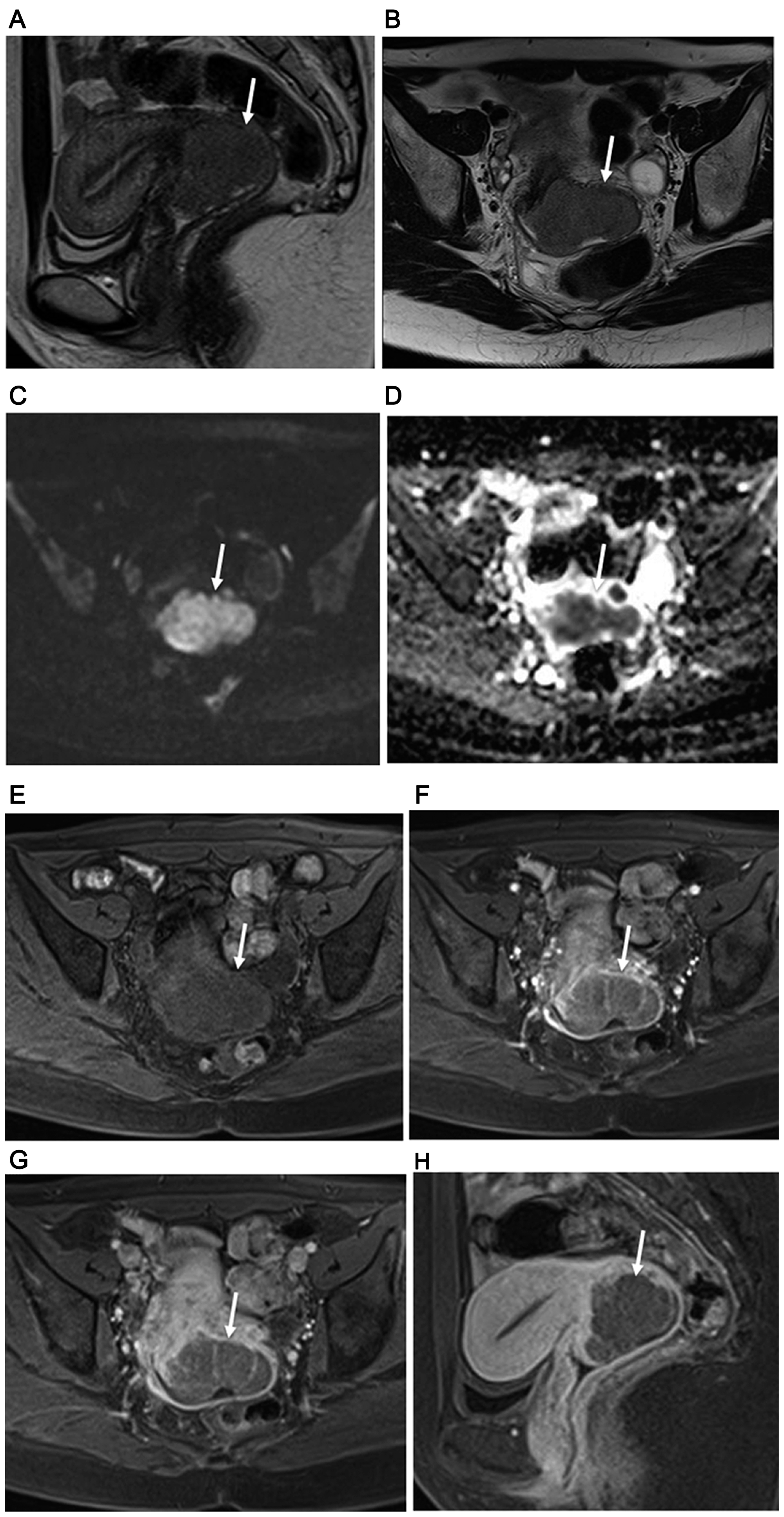 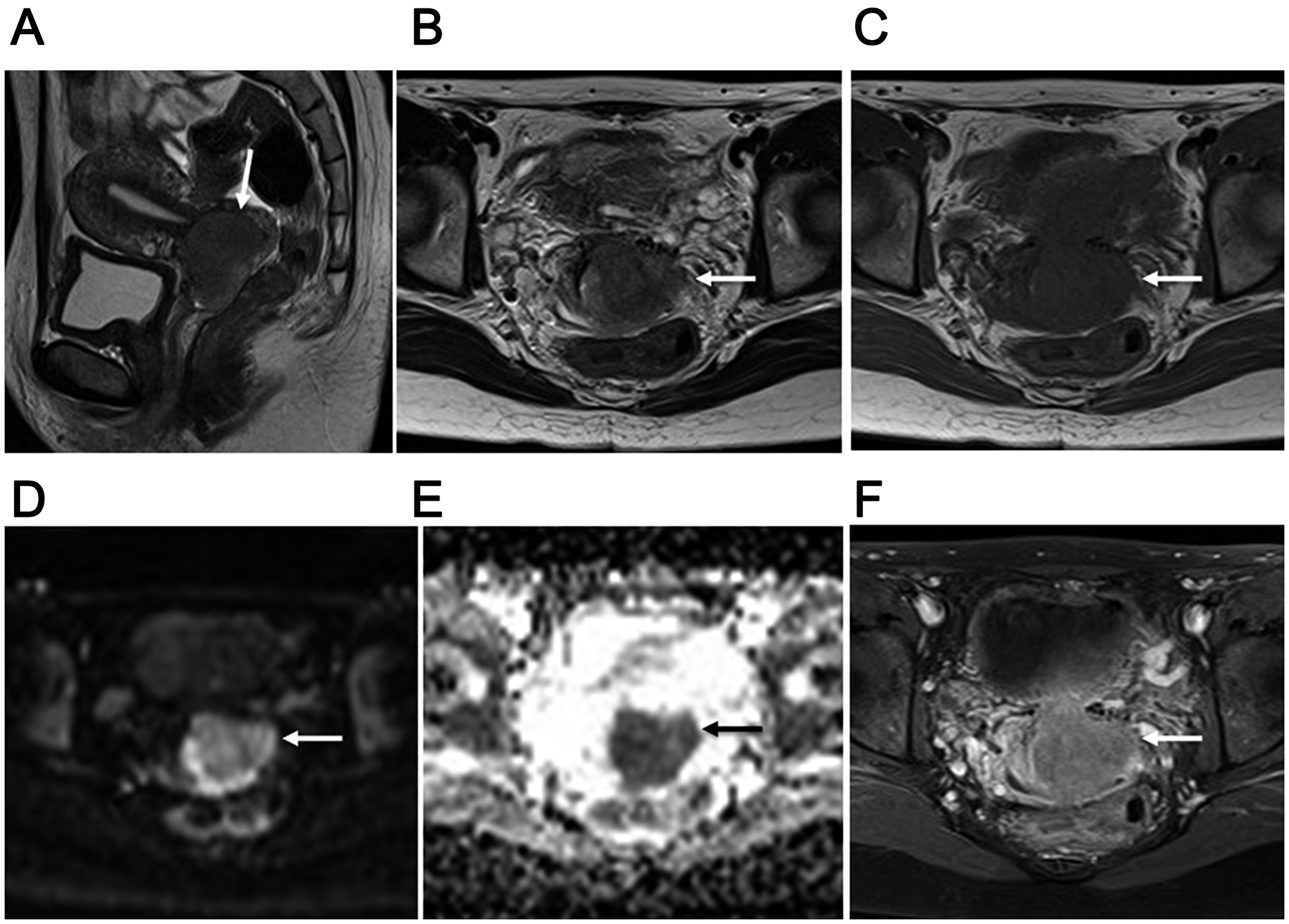 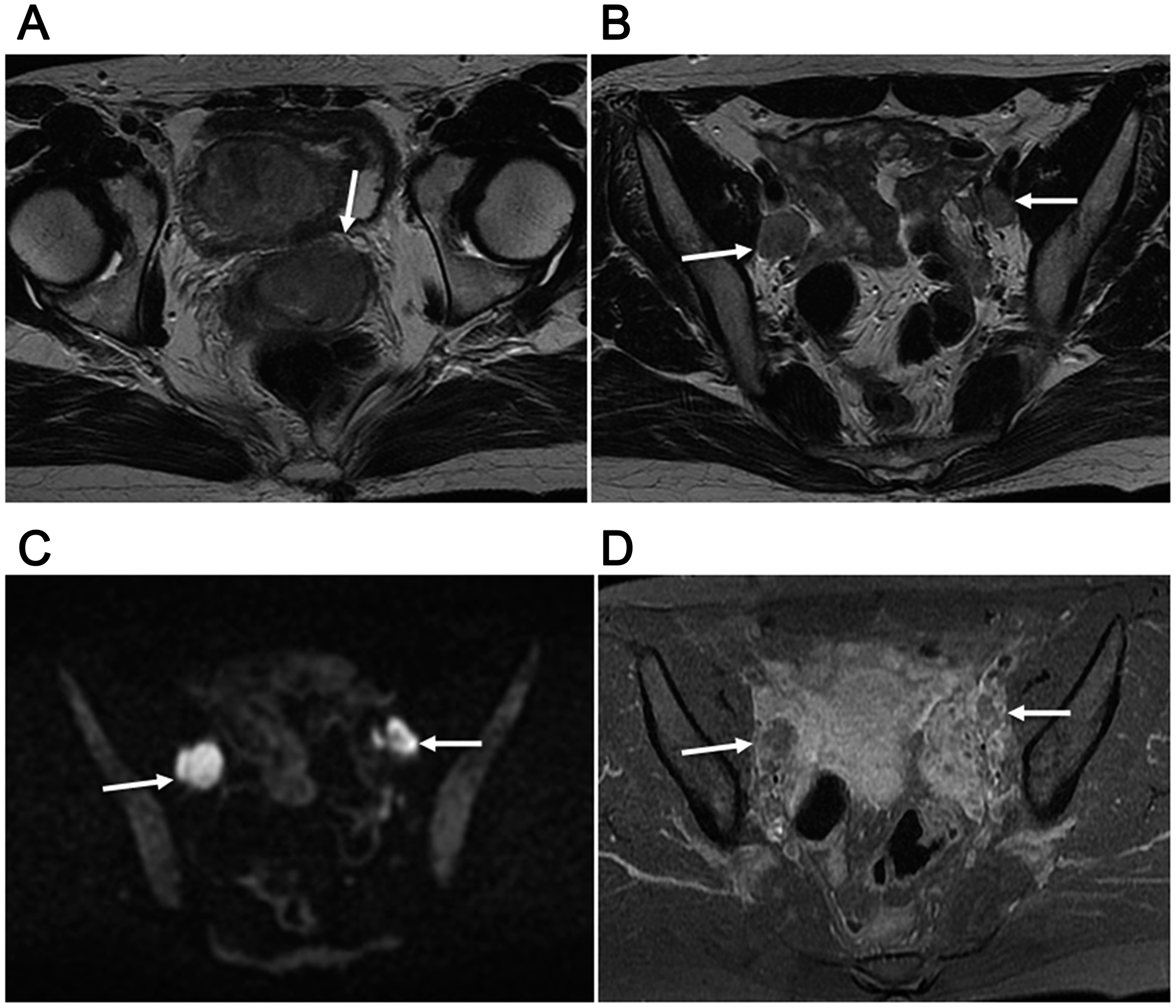 MRI diagnostic accuracy for tumor extension in a neighboring organ in the 50 patients without NAC is summarized in Table 3. Parametrial invasion was noted in 10 (20.0%) of 50 and correctly detected in 8 (80.0%) patients by MRI (Figure 2). Vaginal invasion was noted in 3 (6.0%) of 50 patients and correctly detected in 2 (66.7%) by MRINo invasion of the pelvic wall, urinary bladder, or rectum mucosa was observed in any of the present patients.

Table 3: MRI staging of cervical neuroendocrine carcinoma in 50 patients without NAC on a per patient basis

According to the most recently presented AJCC cancer staging [8], T stage in 50 patients without neoadjuvant chemotherapy (NAC) was classified as pT1b1 in 32, pT1b2 in 6, pT2a2 in 1, and pT2b in 11. Agreement was noted in 44 patients, with the overall accuracy of MRI local staging 88.0%. Details regarding agreement between MRI T staging and pathological staging are shown in Table 4.

Table 4: Correlation between MRI T staging and pathological staging in 50 patients without NAC 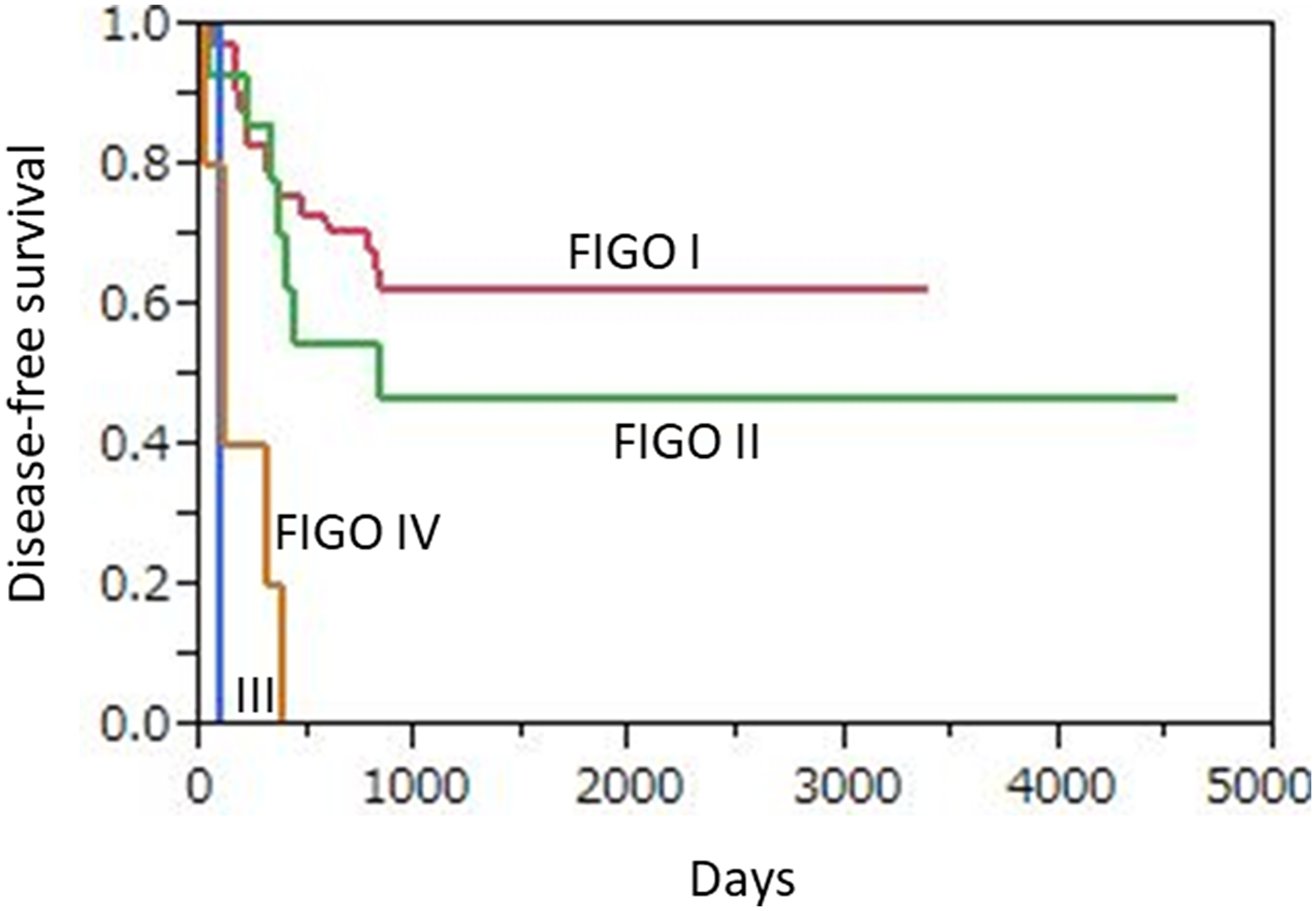 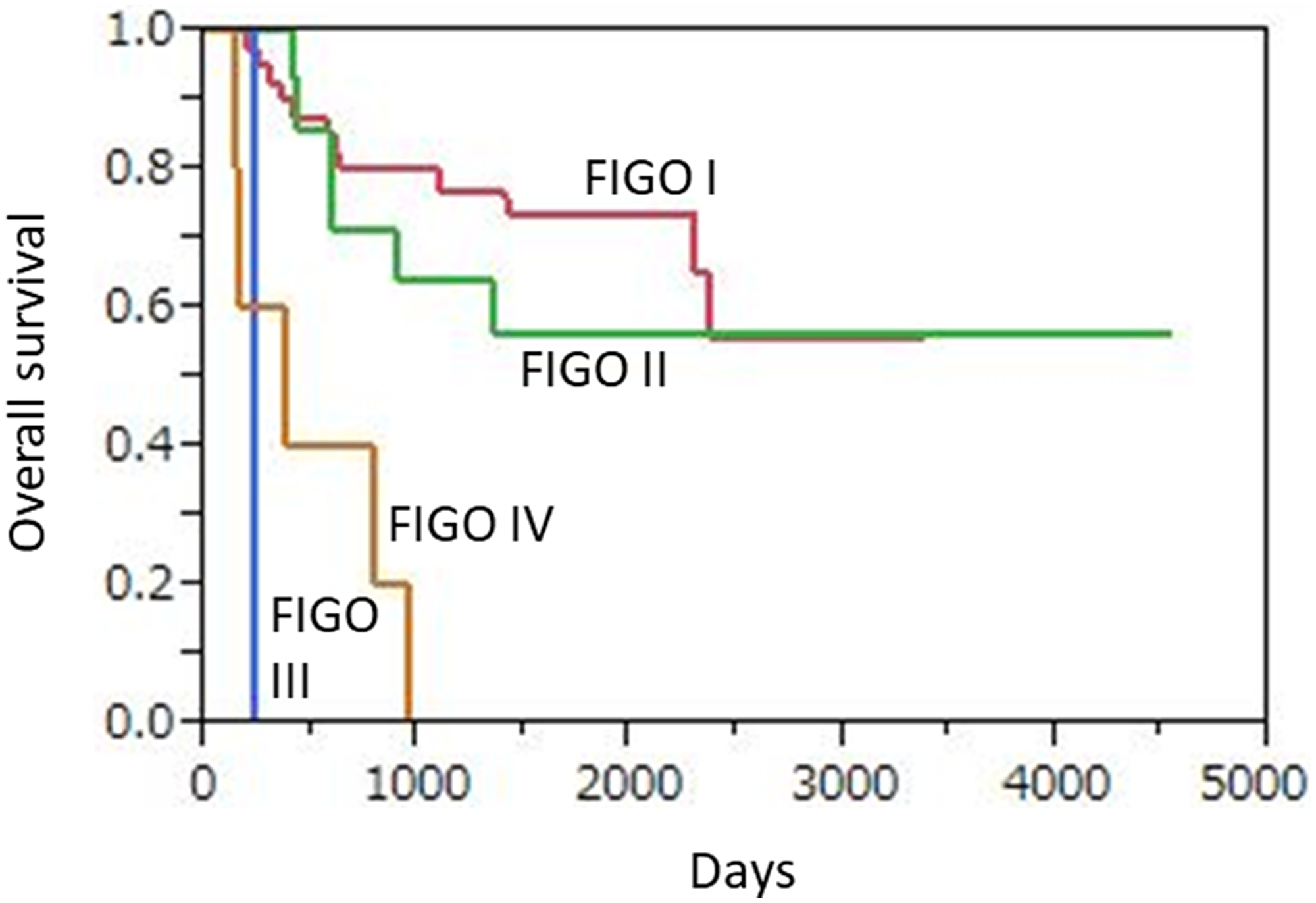 This analysis of 62 patients with uterine cervical NEC proven by histological and surgery results revealed important findings related to MRI and patient prognosis. We found that likely suggestive features of uterine cervical NEC are a homogeneous lesion texture with an obvious restricted diffusion throughout the tumor, and consider that MRI is reliable for T staging of affected patients. Furthermore, it was confirmed that uterine cervical NEC is related to poor prognosis, especially in an advanced stage.

Two previous reports have presented MRI findings of patients with uterine cervical SCNEC [6, 7]. The present results were similar to those, as follows. First, advanced disease of the cervical NEC exhibited an ill-defined margin, irregular shape, infiltration into adjacent structures, and extensive lymphadenopathy in MRI results. These tumors also showed a significant tendency for homogeneous signal intensity with T2WI and homogeneous enhancement. Additionally, DWI showed abnormal high signal intensity with low ADC values throughout the tumor, reflecting a high level of cellularity of malignant cells. Duan et al. [7] reported that these MRI findings are nonspecific for indicating tumor malignancy, and that differentiation between squamous cell carcinoma and adenocarcinoma using MRI results is not easy in cases of cervical NEC. On the other hand, they also noted that lesion homogeneity and low ADC values shown by MRI are likely features suggestive of cervical NEC and the accuracy of MRI local T staging was very high (85.7%), very similar to the value (88.0%) noted in our study.

Although a clear treatment protocol for NEC of the uterine cervix has not been presented, it is recommended that patients be given multimodality therapy, including surgery, chemotherapy, and radiotherapy [4], with surgery generally thought to have the greatest impact. Zivanovic et al. [10] demonstrated that patients who received platinum-based chemotherapy had a 3-year RFS of 83% and OS as well of 83%, whereas those for patients who did not receive chemotherapy were 0% and 20%, respectively.

The present study results are limited by the retrospective design and variations in the MRI scan protocols used among the participating centers over the 13-year study period due to the rarity of this entity. The pathological diagnosis of 62 cervical NECs was made by each pathologist at each institution, not by one pathologist (central diagnosis).

In conclusion, NEC of the uterine cervix is rare and affected patients have a poor prognosis, especially advanced stage cases. A definitive diagnosis based on preoperative MRI results seems to be difficult. Nevertheless, the present as well as other previous findings indicate that a homogeneous lesion texture with an obvious restricted diffusion throughout the tumor are suggestive of uterine cervical NEC. Furthermore, we found pelvic MRI to provide reliable imaging findings for T staging in these patients.

Pelvic MRI results were reviewed by 2 experienced radiologists with experience in gynecological MRI (K. K., 18 years; Y. K., 10 years) and blinded to patient information. Their decisions were made in a consensus manner. For expert review, MR images were displayed with a Digital Imaging and Communications in Medicine viewer (Osirix; Pixmeo, Geneva, Switzerland), and assessments of tumor location, size, margin (well-defined or ill-defined), shape (round/ovoid or lobular/irregular), signal intensity (compared with uterine myometrium), lesion texture (homogeneous or heterogeneous), contrast enhancement patterns, and degree of enhancement were made. Tumor size was measured as the greatest diameter in either the transverse or sagittal plane. Dynamic contrast enhancement patterns were categorized as washout/plateau or gradual. Time-intensity curves were categorized into progressive, plateau, washout, and indeterminate types. Progressive enhancement was defined as a gradual increase in signal throughout all phases of enhancement. Plateau enhancement was defined as an initial increase in signal followed by a plateau in which the MRI signal units remained unchanged within a range of a 5% difference. A washout curve was defined as a steep initial increase and peak in signal followed by a decrease of at least 5%–10% [12]. The degree of tumor enhancement in the late phase was compared with normal myometrium enhancement, then classified as mild, moderate, or strong.

Values are presented as the mean ± standard deviation (SD) and number (%). PFS was analyzed using Kaplan-Meier plots and a log-rank test, and defined as time from initial treatment to tumor recurrence or progression, determined by histologic or follow-up findings, including imaging results. OS was defined as time from initial treatment to date of death from the disease. Statistical analysis was performed using SAS, version 9.3 (SAS Institute Inc.). P values < 0.05 were considered to indicate significance.

This retrospective study was approved by our institutional review board and the need for patient informed consent was waived.

This work was supported by a Hyogo Science and Technology Association (1004) and a JSPS KAKENHI grant (number 19K08187).