Gab1 is essential for membrane translocation, activity and integrity of mTORCs after EGF stimulation in urothelial cell carcinoma

Urothelial carcinoma is the most common type of malignancy in long-term dialysis patients and kidney transplant recipients in Taiwan. mTORCs (mammalian target of rapamycin complexes) and EGF are important in urothelial carcinoma. To identify the regulation of mTORCs upon EGF stimulation is necessary. mTOR integrates signals from growth factors via mTOR Complex 1 (mTORC1) and mTOR Complex 2 (mTORC2). The mechanism of mTORC1 action has been widely studied; however, the regulation of mTORC2 has not been well studied. Here, we demonstrate that Gab1 is an important upstream regulator in EGF-mediated activation of mTORCs. In our study, we confirm that mTORCs translocate from the cytoplasm to the plasma membrane via the PH domain of Gab1 upon EGF stimulation. Moreover, Gab1 associates with mTORCs. This association stabilizes the integrity of mTORCs and induces mTORC activity. Compared to normal bladder tissue, the expression of Gab1 and activity of mTORCs are elevated in urothelial carcinoma. Collectively, our results suggest that Gab1 is an essential regulator of the EGF-mediated mTORC pathways and may potentially be used as a biomarker for urothelial carcinoma to predict diagnosis and drug response.

The mammalian target of rapamycin (mTOR) is a serine/threonine protein kinase that plays a critical role in the downstream networks of many growth factor receptors [3, 4]. Two major regulators of the mTOR complex (mTORC) signaling pathways are mTORC1 and mTORC2. mTORC1 is rapamycin-sensitive and contains mTOR, raptor and mLST8, while mTORC2 contains mTOR, rictor, mLST8 and sin1 [5]. mTORC1 promotes mRNA translation via p70S6K to regulate protein synthesis and cell metabolism [6]. mTORC2 plays an important role in phosphorylation and subsequent activation of AKT to promote cell survival and proliferation [7–9].

It is known that mTORC1 is regulated by activation of PI3K, AKT, Rheb and inhibition of tuberous sclerosis protein 1/2 (TSC1-TSC2); however, the regulatory mechanisms of mTORC2 have not been completely elucidated [10]. PI3K plays a crucial role in mTORC2 activation. In an in vitro mTORC2 kinase assay, mTORC2 was directly activated by PI3K-phosphatidylinositol-3, 4, 5-trisphosphate (PIP3) in HEK293T cells [11]. Ribosomes induced by insulin associate with mTORC2 and lead to activation of mTORC2 [12]. Recently, we demonstrated that mTORC2-dependent AKT activation in a rat model of urothelial carcinoma is a consequence of mTORC1 inhibition [2]. mTORC1 activates p70S6K to phosphorylate rictor at Thr1135, leading to a reduction in mTORC2 activity [13]. Indeed, mTORC1 also plays an important role in mTORC2 regulation. ER stress activates GSK3β to phosphorylate rictor at Ser1235 and subsequently reduces mTORC2 activity [14]. In addition to phosphorylation of rictor, phosphorylation of sin1 attenuates mTORC2 activity. p70S6K and AKT induce phosphorylation of sin1 on Thr86 and Thr398 to dissociate sin1 from the mTORC2 complex [15]. According to these studies, the phosphorylation of rictor and sin1 appears to inhibit the activity of mTORC2; however, the role of the phosphorylation sites on rictor and sin1 remains unclear. The small GTPase Rac1 regulates both mTORC1 and mTORC2 in response to growth factor stimulation. Rac1 binds directly to mTOR independently of the GTP-bound state of Rac1 and mediates membrane localization of mTORCs [16]. The TSC1-TSC2 complex, a negative regulator of mTORC1, is required for activation of mTORC2. This complex associates with mTORC2 but not mTORC1, inhibiting mTORC1 and activating mTORC2 [17].

Previous reports have shown that epidermal growth factor (EGF) induce the activation of mTORC2 [18]. Downstream of the EGF receptor (EGFR), Grb2-associated binder 1 (Gab1) is a major adaptor protein for the EGF-mediated signaling pathway [19, 20]. Evidence suggests that Gab1 may potentially be an important player in the regulation of mTORC2 after EGF stimulation [18]. Gab1 belongs to a family of docking proteins that includes Gab2 and Gab3 [21], and it contains an NH2-terminal pleckstrin homology domain, a Met-binding domain, 3 proline-rich sequences and 16 potential tyrosine phosphorylation sites that represent Src-homology (SH) 2 domain-binding motifs [19, 21]. The PH domain is a common structural element in Gab family members that can recognize and bind to membrane proteins [22]. Moreover, the PH domain of Gab1 binds to PIP3, and is responsible for its membrane localization. It has been reported that the PH domain of Gab1 appears to be required for Gab1 protein function [23–25]. A PH domain deletion mutant of Gab1 is defective in EGFR and c-MET signaling [24]. 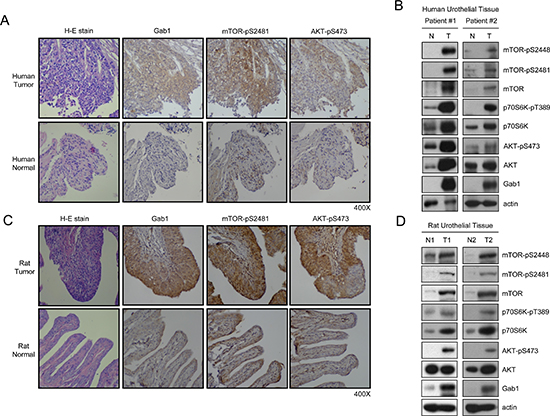 Gab1 is essential for activation of mTORC signaling after EGF stimulation 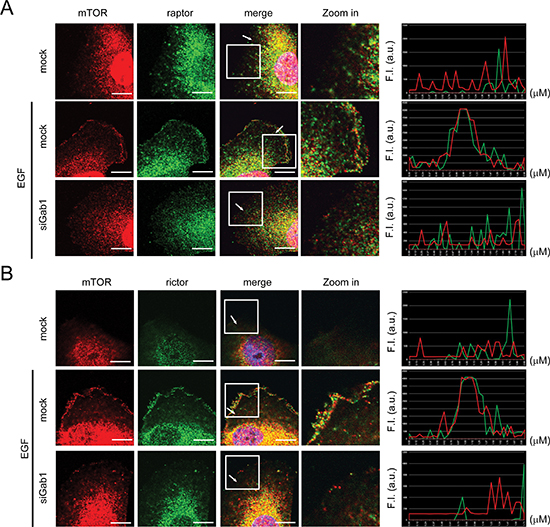 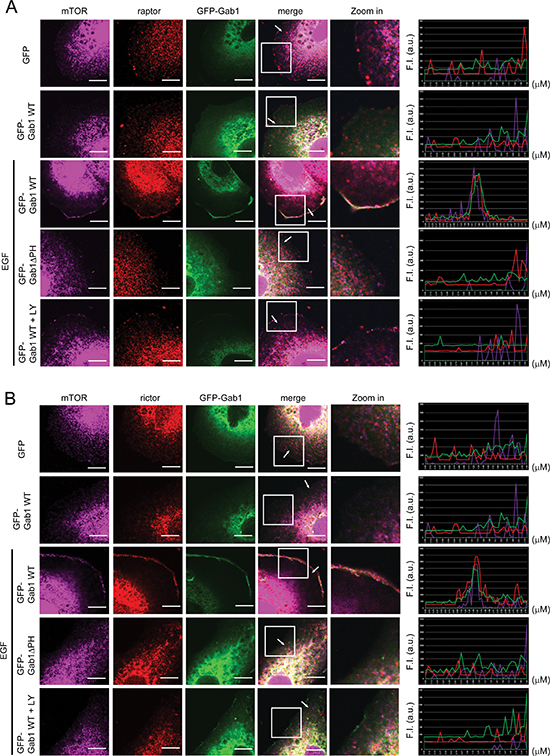 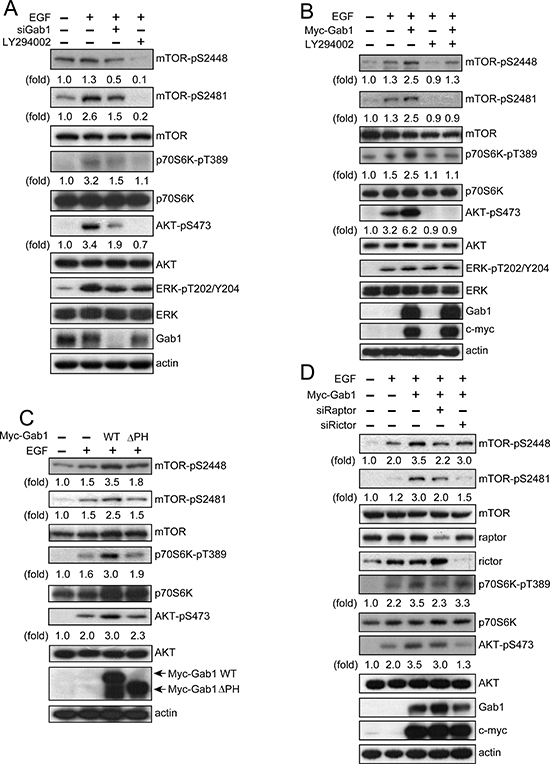 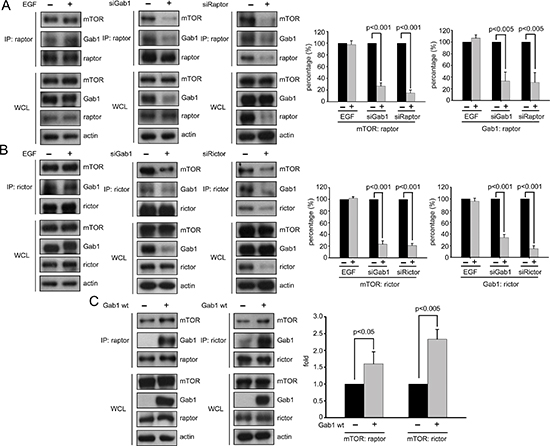 Urothelial carcinoma is the most common type of malignancy in long-term dialysis patients and kidney transplant recipients in Taiwan [1]. mTORCs pathway is important in urothelial carcinoma [28] and it already known that EGF triggers mTORCs activation [18]. A high percentage of EGFR-positive cases (up to 50% of cases) were observed in high-grade urothelial carcinoma [26]. These data suggest that EGFR plays a crucial role in urothelial carcinoma and Gab1 is a major downstream protein in EGFR signal transduction pathway. Therefore, Gab1 may play an important role in regulating EGF-mediated mTORC activity in urothelial carcinoma. Not only urothelial carcinoma, it has been reported that mTORCs are activated in many different carcinomas, such as renal cell carcinoma, melanoma and prostate tumors [29, 30]. mTORC1 promotes HIF-1α and VEGF protein and mRNA expression to induce angiogenesis in renal cell carcinoma [31]. Through the activation of AKT and SGK, mTORC2 may directly drive tumorigenesis. AKT promotes proliferation, survival and nutrient uptake in tumor cells [32]. Furthermore, rictor promotes the assembly and activity of mTORC2, which is required for the growth of various tumor cell lines and for the growth of prostate tumors in PTEN-deficient mice [30]. In this study, we indicate the importance of regulation of mTORCs via Gab1 after EGF stimulation.

Several studies have indicated that growth factor stimulation is involved in the regulation of mTORC2. Currently, it is thought that mTORC2 is activated via the PI3K pathway. Zinzalla et al. (2011) revealed that in the PI3K pathway, the association with ribosomes generates signals that are transduced to the mTORC2 signaling pathway [12]. In fact, mTORC2 is also regulated by mTORC1. Julien et al. (2009) and Liu et al. (2013) revealed that mTORC1-activated p70S6K phosphorylated rictor at Thr1135 and phosphorylated sin1 at Thr86 and Thr398 to inhibit mTORC2 activity [13, 15]. Our previous report also showed similar findings, in which rapamycin inhibited mTORC1 and induced phosphorylation of AKT at Ser473 in urothelial carcinoma [2]. In addition to mTORC1, Chen et al. (2011) also revealed that ER stress inhibits mTORC2 through GSK-3-mediated phosphorylation of rictor at Ser1235 [14].

However, it has been reported that mTORC2 is directly activated by PIP3 in HEK293T cells [11]. Thus far, there is no evidence to indicate that signaling extends beyond PIP3 in the activation of mTORC2. Cao et al. (2009) revealed that EGF exerts its effects via Gab1 by means of an unidentified mechanism to regulate mTORC2 activity [18]. In fact, Gab1 is a major protein that associates with PIP3 after EGF stimulation [19]. In this study, we provide evidence to support the hypothesis that Gab1 associates with mTORC2 and regulates mTORC2 membrane translocation. When PI3K is inhibited, mTORC2 does not translocate to the plasma membrane after EGF stimulation. Moreover, Gab1 also associates with mTORC1 and regulates mTORC1 membrane translocation. We also revealed that PI3K activates mTORCs via the PH domain of Gab1, which binds to PIP3.

Interestingly, Gab1 not only associates with mTORCs and regulates their plasma membrane translocation but also stabilizes the integrity of mTORCs. Only the components of mTORCs (raptor, rictor and sin1) have been known to regulate the integrity of mTORCs [5]. In fact, there are two endogenous inhibitors of mTORCs, DEPTOR and XPLN. Depletion of DEPTOR activates mTORCs, and mTOR negatively regulates the protein and mRNA expression of DEPTOR [33]. XPLN is a guanine nucleotide exchange factor (GEF) for Rho GTPases and is a partner of mTORC2 but not mTORC1. Knockdown of XPLN enhances the activity of mTORC2 [34]. However, DEPTOR and XPLN are not similar to raptor, rictor and sin1. DEPTOR and XPLN interact with mTORCs and inhibit their activity. In this study, we found that Gab1 associates with mTORCs and regulates their integrity. Thus, we suggest that Gab1 is an endogenous enhancer of mTORCs.

Mutagenesis and cellular transfections with plasmids and siRNA

For western blotting, the cells and patient samples were lysed in RIPA buffer (Millipore, Billerica, Massachusetts) with HaltTM protease & phosphatase inhibitor (Thermo Scientific, Rockford, IL). For immunoprecipitation, the primary antibodies (Gab1, 1:50 and rictor, 1:50) were incubated with Dynabeads® Protein G (Invitrogen Dynal AS, Oslo, Norway) for 1 h at 25°C, followed by incubation with the cell lysates (500 μg-4 mg) for 2 h at 25°C. Total cell extracts and immunoprecipitated proteins were fractionated by SDS-PAGE followed by immunoblotting. The blots were visualized with SuperSignal West Pico chemiluminescent substrate (Thermo Scientific, Rockford, IL) and detected using X-ray film (Fuji Photo Film, Tokyo). The quantitation of the western blot was quantified by Multi Gauge V3.0. The experiments were repeated in triplicate.

After fixing bladder tissue in 10% formalin, the lumen was inspected for grossly visible lesions. All immunohistochemical studies were performed on paraffin-embedded sections. The 4-μm-thick deparaffinized sections were incubated with the primary antibodies Gab1 (1:250), AKT-pS473 (1:250) (Santa Cruz Biotechnology Inc., Santa Cruz, CA) and mTOR-pS2481 (1:250) (Abcam, Cambridge, MA). As a negative control, the primary antibody was replaced with normal rabbit IgG, and staining was not performed. All slides were scanned with a Leica DM750. For the immunofluorescence staining, the cells were fixed in 4% paraformaldehyde for 30 min and incubated in 1% Triton-100 for 30 min at 25°C. The primary antibodies Gab1 (1:100) (Santa Cruz Biotechnology Inc., Santa Cruz, CA), rictor (1:1000) and mTOR (1:500) (GeneTex, Hsinchu, Taiwan) were incubated overnight at 4°C. The secondary antibodies Alexa Fluor® 488 goat anti-mouse, goat anti-rabbit; Alexa Fluor® 546 goat anti-mouse, goat anti-rabbit; and Alexa Fluor® 647 goat anti-rabbit (Invitrogen, Grand Island, NY) were incubated for 1 h at 25°C, and the coverslips were mounted in DAPI Fluoromount-G (Southern Biotech, Birmingham, Alabama) and scanned by laser-scanning confocal microscopy (OLYMPUS FLUOVIEW FV1000). The experiments were repeated in triplicate.

The rat model of urothelial carcinoma was induced by adding 0.05% N-butyl-N-(4-hydroxybutyl) nitrosamine (BBN) to the drinking water for 20 weeks. All rats (Control group, 10 rats and BBN group, 10 tars) were sacrificed under pentobarbital anesthesia after 20 weeks of treatment. The protocol was approved by the Animal Care and Research Committee of Taichung Veterans General Hospital (permit number: La-96409).

All urothelial carcinoma samples and normal bladder tissue from patients were obtained from the Department of Urology at the Taichung Veterans General Hospital, Taichung, Taiwan, with the approval of the Institutional Review Board (IRB number: CG11044).

All data are expressed as the mean ± standard deviation. All statistical analyses were performed using the Statistical Program of Social Sciences software (SPSS version 13.0 for Windows, SPSS Inc., Chicago, IL). Student’s t-test was used to determine whether there was a significant difference between two means. Statistical significance was defined as a P value less than 0.05.