Objective: In addition to the most common somatic lung cancer mutations (i. e., KRAS and EGFR mutations), other genes may harbor mutations that could be relevant for lung cancer. We defined BRAF, c-MET, DDR2, HER2, MAP2K1, NRAS, PIK3CA, and RET mutations as “niche” mutations and analyzed. The aim of this retrospective cohort study was to assess the differences in the overall survival (OS) of patients with lung adenocarcinoma harboring niche somatic mutations.

Methods: Three cohorts of mutations were selected from patients with lung adenocarcinoma and their OS was compared. Mutations that were searched for, were 1) BRAF, c-MET, DDR2, HER2, MAP2K1, NRAS, PIK3CA, and RET; 2) K-RAS; and 3) EGFR. Differences in OS between these three cohorts were assessed by means of a multivariable Cox model that adjusted for age, sex, smoking habits, clinical stages, and treatments.

In the last century, carcinoma of the lung has progressed from an uncommon and obscure disease to the most common cancer in the world, and the most common cause of death from cancer. In 2018, new cases of lung cancer in the US were estimated at 121,680 for men and at 112,350 for women, for a total of 234,030 cases, representing the equivalent of 641 cases of lung cancer diagnosed each day [1, 2]. Many gene mutations have previously been identified in several solid tumors [3, 4]. For lung cancer, in particular, the most common mutations found are in the epidermal growth factor receptor (EGFR) gene and the K-Raf kinase gene family (KRAS) [5]. In addition to these somatic mutations, which are the most frequent, other mutations in several genes have been discovered, including BRAF, c-MET, DDR2, HER2, MAP2K1, NRAS, PIK3CA, and RET mutations [6, 7]. The main feature that characterizes these “niche” mutations is their low prevalence in the population of patients with lung cancer when compared with KRAS and EGFR. In the present study, we identified these “niche mutations” on the basis of a population prevalence that was equal to or less than 10% based on literature data [8–10]. In particular, according to recently published data concerning 14 healthcare institutions in the US, the prevalence for these mutations was as follows: KRAS 25%, EGFR 23%, HER2 2.7%, BRAF 2.6%, PIK3CA 0.8%, NRAS 0.7%, c-MET 0.7%, and MAP2K1 0.3% [8]. Moreover, the prevalence of the RET mutation in adenocarcinoma was estimated to be 1.7% [9], and the prevalence of DDR2 mutation in lung cancer was 2.2% [3, 10]. Overall, the KRAS mutation was considered to be the most lethal mutation, exhibiting the worst prognosis [3–5]. Nevertheless, the potential aggressiveness of niche mutations remains unclear [6, 8].

With regard to treatment, discoveries of gene mutations have allowed the development of targeted therapies, which are considered more effective for survival than chemotherapy in patients with advanced mutated disease [11].

The purpose of this observational retrospective cohort study was to assess differences in overall survival (OS) rates in patients with histologically diagnosed lung adenocarcinoma harboring either the most frequently detected or niche somatic mutations, to highlight new aspects to consider for prognosis and treatment. Considering the potential aggressiveness of niche mutations in this context, the technological advances of next-generation sequencing (NGS), which is currently used in clinical practice, represents a precise approach to identifying a large panel of mutations in oncologic patients [12].

Table 1: Patients characteristics at primary diagnosis and treatments after diagnosis

Notes: Counts at different levels of details may differ. All identified exons and codons were reported and only amino acids alterations with absolute frequency ≥ 5 are shown. Mutations for which the codon was not identified are not considered in the table. 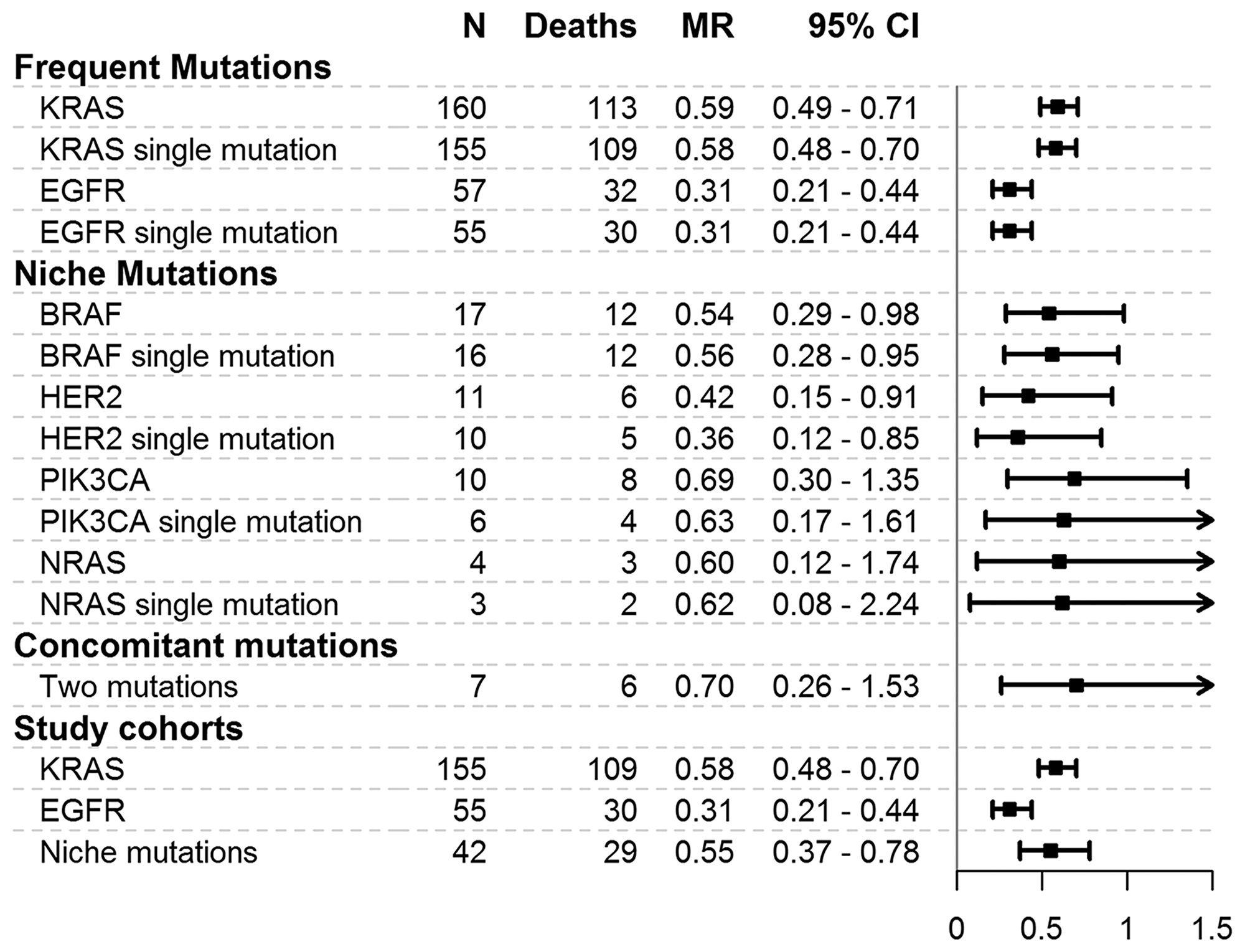 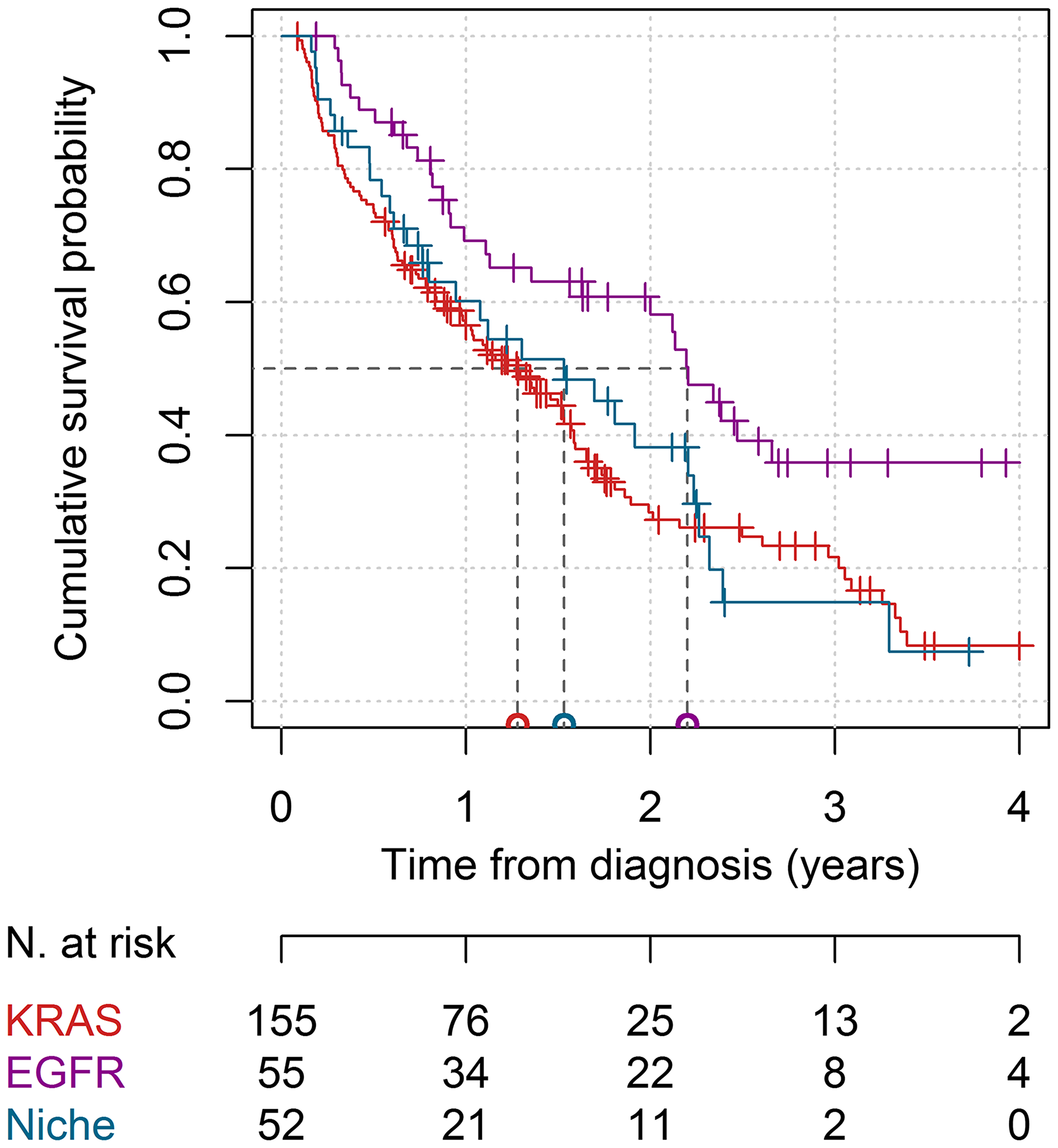 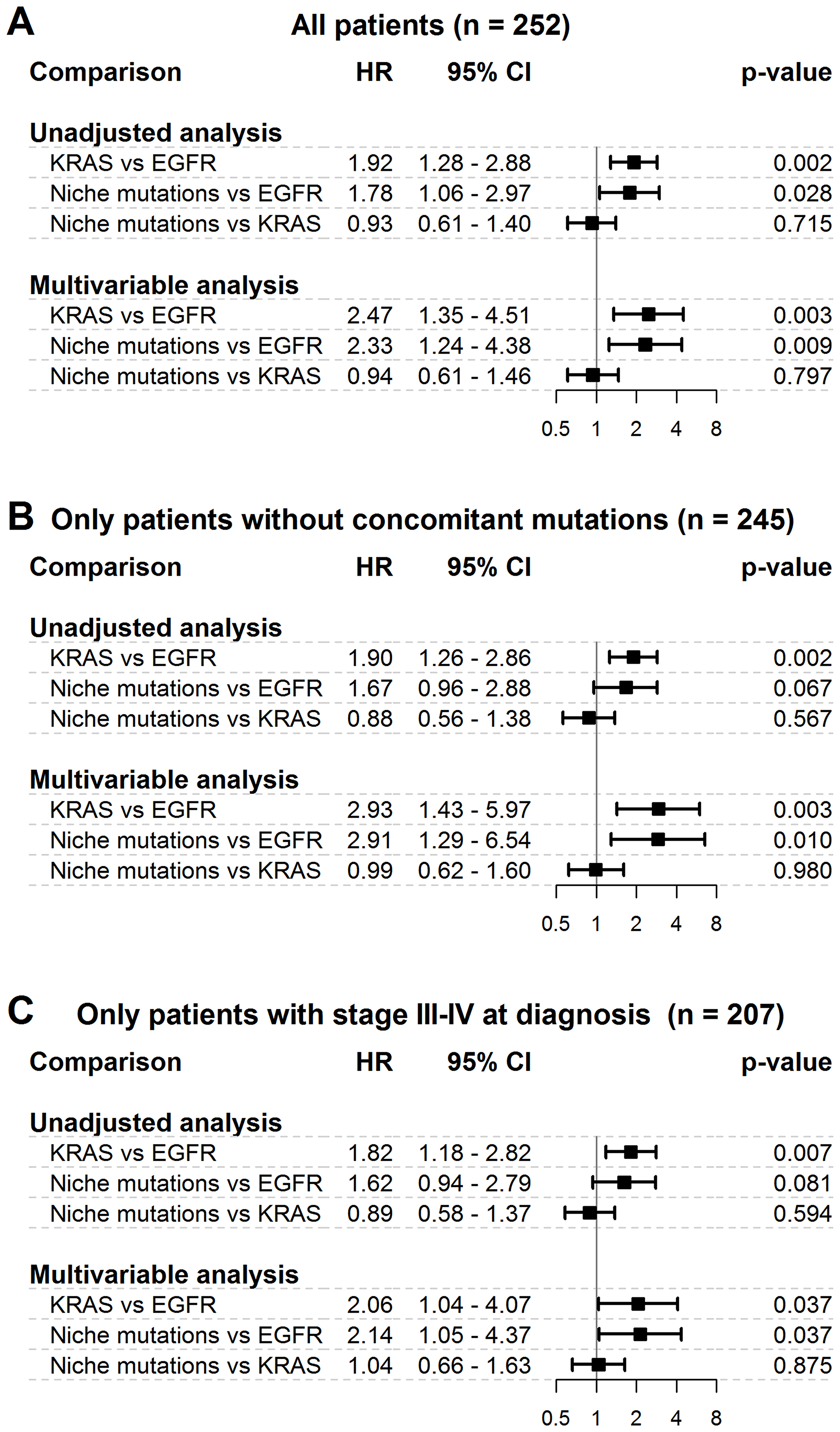 Regarding treatments given after diagnosis, we observed that our cohorts of patients were treated as previously described for general mutations [15, 16]. This is likely because niche mutations are poorly understood, especially in terms of biological characteristics and interactions. However, we believe that the percentage of patients harboring niche mutations suggests further study, in particular with respect to treatment strategies.

In our study, we underlined the importance of niche mutations in terms of OS relative to the most frequent general somatic mutations and for KRAS in particular, which is considered to be the most frequent and aggressive mutation in lung adenocarcinoma. EGFR and KRAS gene mutations are already recorded in the molecular report that an oncologist needs to provide “personalized” therapy [17–20]. In addition to the mutations for which target therapies have been generally successful, for example, for the EGFR gene, there are still mutations without effective therapies, as for the KRAS and niche mutations. The scientific community has agreed on the fact that KRAS is one of the most aggressive mutations in terms of prognosis and survival because it exhibits a high mortality rate and there is no existing targeted treatment available [17, 18]. Our data described a similar OS for KRAS and niche mutations. This aspect is very interesting and needs to be further considered, although little has been published on niche mutations in lung cancer, probably because they are only observed in a small proportion of the population.

We first described a large cohort study analyzing niche mutations in adenocarcinoma of the lung and their prognostic role as compared with the more frequently diagnosed mutations. In the current scientific literature, many studies have described the occurrence of general somatic mutations in NSCLC, although some niche mutations, such as c-MET and RET in adenocarcinoma of the lung have been described in a few short reports [19–22], or in a larger population focusing on a single-niche mutation of PIK3CA [23–25]. We took into consideration different rare mutations observed in BRAF, PIK3CA, HER2, and NRAS detected with a total frequency equal to 16.7% of patients with lung adenocarcinoma harboring somatic mutations, which is not a negligible prevalence if transposed to the entire population. Moreover, niche mutations presented a high risk of death, accounting for 55% of deaths in one person-year.

We know that mutations in the KRAS gene are the most aggressive, and for this reason, we highlighted the importance of evaluating these niche mutations through our results. The life expectancy of these patients was low and seemed to be very similar to that of patients with well-established aggressive general mutations. These patients may benefit from the use of specific inhibitors such as dabrafenib/trametinib, which are used for BRAF v600E mutations [26].

Finally, the present study has some limitations that should be discussed. First, the observational and retrospective nature of this study presents a risk of bias; however, adjustments made to the multivariable analysis protected against confounding bias due to the observed patient characteristics. Nevertheless, other unobserved factors may have biased our results. Second, even if we observed statistically significant differences in the OS between niche mutations and general mutations in a large set of consecutive patients enrolled over 5 years, another limitation relates to the low absolute number of patients with niche mutations that were present. Because of this, it was not possible properly to assess differences in OS between the single-niche mutations. Moreover, because c-MET, DDR2, MAP2K1, and RET gene mutations were not observed in this study, we cannot draw conclusions about the OS of patients harboring these niche mutations.

Taken together, these limitations highlight the need for an extended study to confirm our findings and to reduce further the uncertainty regarding the prognostic role of niche mutations.

This retrospective cohort study was carried out in accordance with the STrengthening the Reporting of OBservational studies in Epidemiology (STROBE) statement [13].

All patients received standard treatments according to the current guidelines based on clinical stage and other relevant clinical factors.

The somatic mutations that were considered were those detectable by our genotyping platform.

Molecular analysis of gene mutations was performed for patients with advanced lung cancer or for early-stage surgical patients after recurrence.

DNA was extracted from 10 μm thick representative sections cut from formalin-fixed and paraffin-embedded blocks of each tumor sample containing at least 50% tumor cells. Extraction was performed with the QIAamp DNA Mini Kit (Qiagen, Hilden, Germany), and the DNA was quantified with Xpose NGS (Trinean NV, Gentbrugge, Belgium). Mutations were detected using the high-throughput genotyping platform Sequenom MassARRAY® System (Sequenom, San Diego, CA, USA) and the Myriapod® Lung Status kit (Diatech Pharmacogenetics, Italy) following the manufacturers’ protocols. The molecular array allowed for the identification of the mutations of the BRAF, c-MET, DDR2, EGFR, HER2, KRAS, MAP2K1, NRAS, PIK3CA, and RET genes. In brief, 25 ng DNA of each specific primitive tumor was amplified through a multiplex polymerase chain reaction and then incorporated nucleotides were inactivated using shrimp alkaline phosphatase. A single-base extension reaction was performed using extension primers that hybridized immediately adjacent to the mutations and a custom mixture of nucleotides. Salts were removed using a cation exchange resin. Multiplexed reactions were spotted in SpectroCHIP II arrays, and DNA fragments were resolved with matrix-assisted laser desorption/ionization–time-of-flight (MALDI–TOF) using a compact mass spectrometer (Sequenom, San Diego, CA, USA) with a detection limit of 5%. The data were evaluated using MassARRAY Typer analyzer software 4.0, which allowed the identification of mutated alleles by comparing the ratio of the wild-type peak of all suspected mutants.

Descriptive characteristics of the patients at the time of diagnosis were recorded. Continuous variables were recorded as mean ± standard deviation (SD) values, and categorical variables were recorded as absolute and percentage frequencies. Comparisons of group characteristics were drawn using analysis of variance and chi-square tests. OS was defined as the time span from diagnosis to death (all-cause mortality was considered). The OS of patients who were still alive at the end of the follow-up period were treated as censored survival times. The main aim of the analysis was to compare the OS of three cohorts of patients harboring: 1) niche mutations (BRAF, c-MET, DDR2, HER2, MAP2K1, NRAS, PIK3CA, or RET); 2) KRAS mutations; 3) EGFR mutations. The mortality rates (MRs) were calculated as the number of deaths per person-year. The OS curves were calculated using the Kaplan–Meier method. The pairwise differences in OS between the three cohorts of interest were assessed by means of a Cox proportional hazards regression model. The Cox model results were reported as hazard ratios (HRs) with 95% confidence interval (95% CI) from unadjusted analysis (i. e., with the cohort as the only independent variable) and from a multivariable analysis that adjusted for the confounding effects attributable to age (years); sex (M vs F); smoking habits (yes vs no); clinical stage (III, IV vs I–II) at diagnosis; and treatments after diagnosis (surgery, chemotherapy, radiotherapy, immunotherapy, and target therapy – all yes vs no). The proportional hazards assumption was validated by a graphical assessment of scaled Schoenfeld residuals. All statistical analyses were performed with R 3.4.3 statistical software (The R Foundation for Statistical Computing, Wien) at the p < 0.05 significance level.

We found evidence of a higher risk of death for patients harboring niche mutations relative to patients with EGFR gene mutations, whereas the risk for patients with niche mutations was found to be comparable to that of patients harboring KRAS gene mutations. We may summarize this message in two points: 1. As soon as the molecular biologist is able to identify a niche mutation, it is necessary to highlight this in the patient report to set a targeted treatment that offers a better solution than chemotherapy for the patient; 2. The NGS technique, which is able to select a myriad of genes, is more useful for the oncologist who is conscious of the importance of considering niche mutations.

The correct selection of mutations will be helpful in terms of the greater efficacy of treatment in association with better prognosis and a higher quality of life for oncologic patients.