Methods: This was a subgroup analysis of a phase 3 randomized study. In this study, locally advanced head and neck cancer patients undergoing definitive chemoradiation were randomly allocated to weekly cisplatin (30 mg/m2 IV)- radiation (66–70 Gy) {CRT arm} or nimotuzumab (200 mg weekly) -weekly cisplatin (30 mg/m2)-radiation (66–70 Gy) {NCRT arm}. The data of HPV negative oropharyngeal cancer was extracted from the database of this study for the analysis. HPV testing was done with p16 immunohistochemistry (IHC) staining and reported according to the CAP criteria. The outcomes assessed were progression-free survival (PFS), disease-free survival (DFS), locoregional control, and overall survival (OS). Interaction test was performed between the study arms and HPV status prior to doing any HPV specific analysis for each of the studied outcomes. Kaplan Meier estimates for 2 year OS with 95%CI was calculated. The hazard ratio was obtained using COX regression analysis.

Locally advanced oropharyngeal cancers possess a unique challenge. The anatomical location along with multiple physiological functions associated with this structure makes open surgical resection a difficult and moribund procedure [1]. Hence in locally advanced oropharyngeal cancers, concurrent chemoradiation is used primarily for management. The prognosis of these tumors is heavily dependent on the Human Papilloma Virus (HPV) status [2]. Patients with HPV positive disease have a favorable prognosis as opposed to HPV negative disease [2]. The incidence of HPV positive disease is variable across the globe with the incidence in North America in the range of 48–81.4% [3], and 15–22.8% in the Indian subcontinent [4].

Efforts to improve outcomes in locally advanced oropharyngeal cancer have met with limited success [5, 6]. Recently a phase 3 randomized study was reported by us, in locally advanced head and neck cancers, testing the role of concurrent nimotuzumab in addition to weekly cisplatin and definitive radiation. The study met its primary endpoint of progression-free survival [7]. However, a similar study exploring the role of Cetuximab (RTOG 0522) was negative [8]. We had hypothesized that an improvement in outcomes in our study was seen due to the differential patient population in our study when compared to the RTOG 0552 study. We had a younger cohort of patients and a predominantly HPV negative disease [7]. This population, even in RTOG 0522 showed a trend towards improvement with the addition of cetuximab [8]. Another phase 3 study, exploring the role of cetuximab along with carboplatin -5 FU with radiation, reported improvement in outcomes with the addition of cetuximab [9]. The probable reason for this was probably due to the predominant HPV negative disease.

Taking this into consideration, we decided to perform a subgroup analysis of the HPV negative oropharyngeal cancer cohort, to study the absolute improvement in 2-year outcomes with the addition of nimotuzumab. We compared 2 year progression free survival (PFS), disease free survival (DFS), locoregional control (LRC) and overall survival (OS) between both arms.

We had 536 patients in the study, out of which 269 had primary in the oropharynx. P16 testing was feasible in 212 patients and 187 patients were p16 negative. These 187 patients are included in the current analysis. There were 91 patients in the cisplatin radiotherapy (CRT) arm and 97 in nimotuzumab-cisplatin radiation (NCRT) arm. The baseline characteristics were balanced between the 2 arms (Table 1).

Data are presented as number (%) unless otherwise specified.*P-value provided is for the comparison of age < 60 years versus age > or = 60 years between the 2 arms. †The staging was done according to the AJCC-UICC 7th Edition. 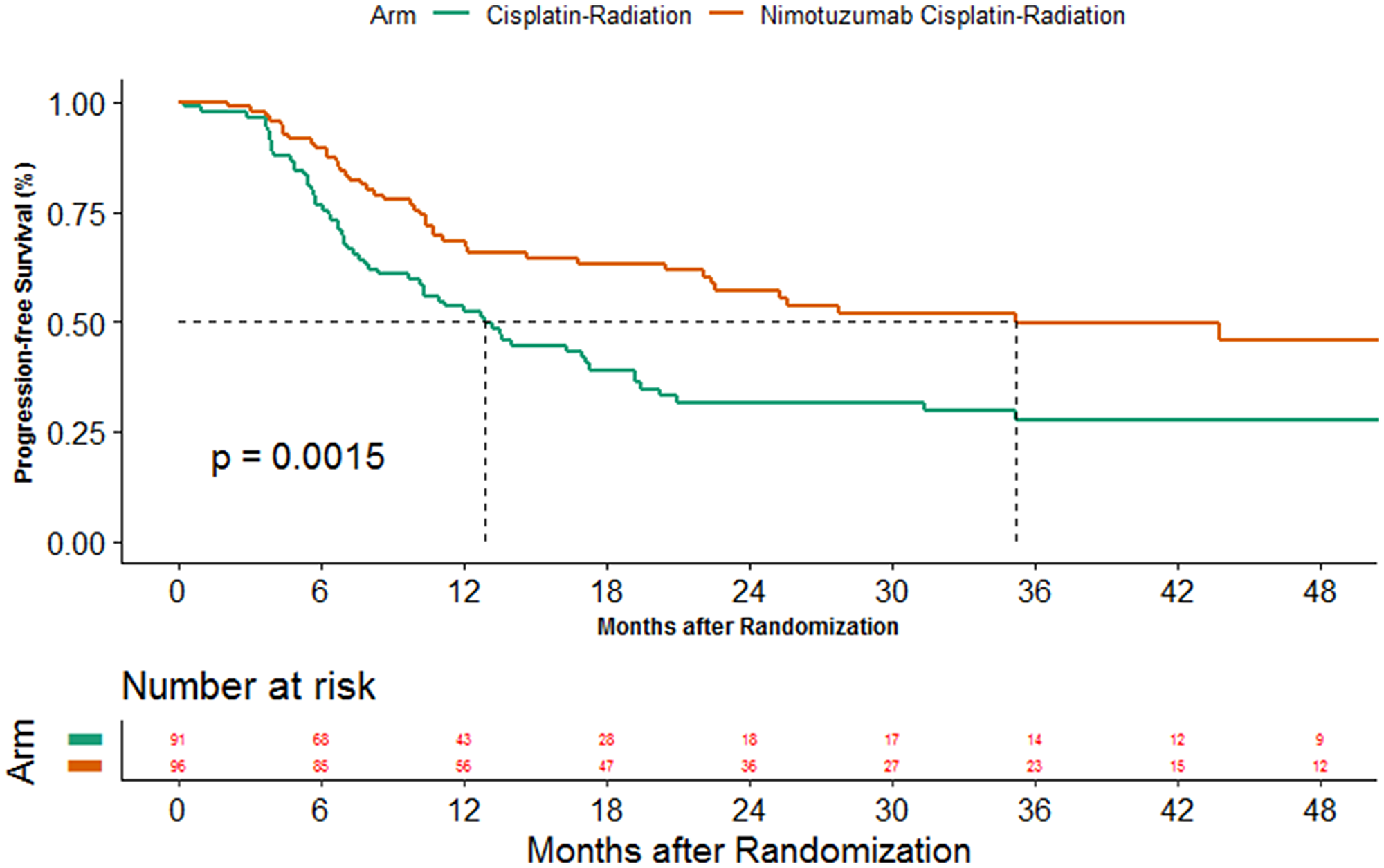 Figure 1: Kaplan Meier estimates of progression-free survival between the 2 arms.

Figure 2: Kaplan Meier estimates of time to locoregional control between the 2 arms. 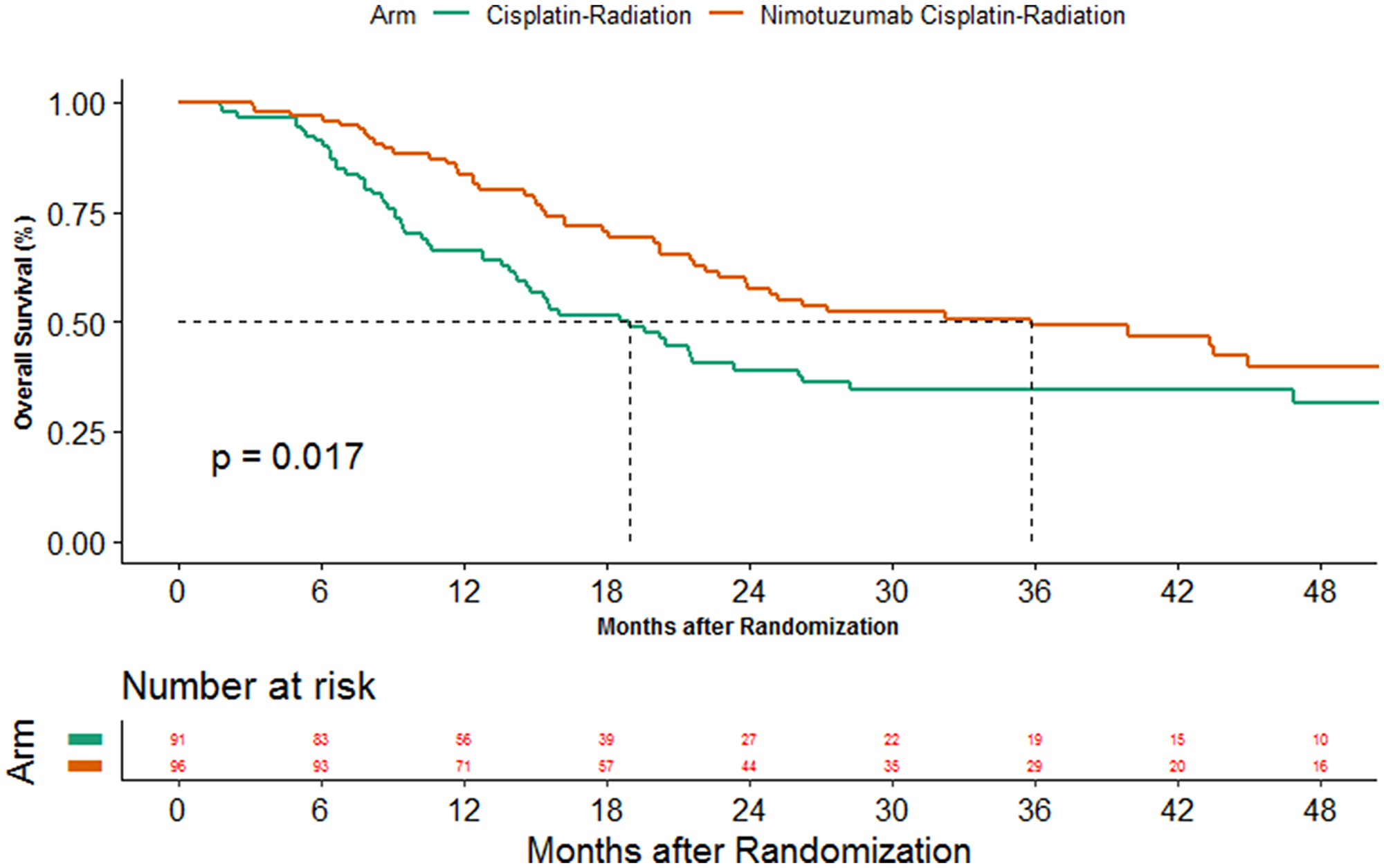 The data for treatment compliance and radiation technique are shown in Table 3. There was no difference in these factors between the 2 arms.

The results of the current study clarify the importance of treatment intensification in HPV negative oropharyngeal cancers. Locoregional control, progression-free survival and overall survival were improved with the addition of nimotuzumab to cisplatin and radiation. The absolute improvement in the 2 years LRC and PFS were around 20–25 percent. The corresponding improvement in OS was 18 percent. These improvements, in accordance with the ESMO magnitude of clinical benefit scale for curative treatment would classify as “A” [10].

As opposed to HPV related oropharyngeal cancer, HPV negative oropharyngeal cancers have worse prognosis. The median PFS, LRC, and OS in the current study are however, lower than reported in literature from the western world [8, 11, 12], [13–15]. The patient population in the current study had a history of tobacco use (90 percent) with the predominance of stage IV disease (80 percent), which probably resulted in lower survival. Both tobacco and stage IV are known bad prognostic factors [2, 16]. Another factor responsible for poorer outcomes would be the use of weekly cisplatin. However, it is unlikely as the cumulative dose of cisplatin received was 200 mg per M2 or more in nearly 3/4th of the patients. Dose intensification above 200 mg/m2 has questionable benefit [17]. These results in the control arm are similar to the results we previously reported [16].

Addition of nimotuzumab as a radiosensitizer to weekly cisplatin and addition of cetuximab to carboplatin 5-FU resulted in an improvement in outcomes over weekly cisplatin and carboplatin-5 FU in locally advanced head and neck cancers [7, 9]. However, a similar study of the addition of cetuximab to 3 weekly cisplatin was associated with negative results [8]. The probable reason for this discrepancy was the nature of the population in these 3 studies. In our study and the french study, the predominant population was HPV negative while, in the RTOG 0552, the predominant population was HPV positive. We feel that dose intensification would work if the population had poor prognostic factors like HPV negative. Hence, this analysis was performed to study whether addition of nimotuzumab would have larger incremental benefits in a HPV negative population. And indeed it leads to larger incremental benefits as opposed to the whole cohort Supplementary Table 3.

The current study is not without limitations. It is a subgroup analysis. However, an interaction test was performed prior to doing the subgroup analysis, to determine whether nimotuzumab had a differential impact or not. The study had used weekly cisplatin and not 3 weekly cisplatin, and so, the outcomes of the analysis are only applicable for weekly regimen.

Patient population and design of the study

This was a phase 3 randomized superiority study conducted between 2012–2018. The study protocol was approved by the institutional ethics committee and the study was conducted in accordance with national (Indian Council of Medical Research) and international guidelines (Good Clinical Practice and Declaration of Helsinki) on human research. The detailed inclusion-exclusion criteria with study protocol are already published [7]. The study enrolled patients with locally advanced head and neck cancer who were planned for curative intent therapy, had normal organ functions, no uncontrolled comorbidities and ECOG PS 0–2. Patients with primary in salivary gland, nasopharynx or thyroid were excluded. For the current analysis, we selected locally advanced oropharyngeal cancer patients who were considered as p16 negative on immunohistochemistry.

Intervention in both arms

The standard arm received radical radiation to a dose of 66–70 Gy with conventional fractionation over 6–7 weeks. Altered fractionation schedules were allowed in both arms if the Biologically equivalent dose (BED) was around 70Gy10. The chemosensitizer used was weekly cisplatin –30 mg/m2. The dose of 30 mg/m2 was selected as it was considered as standard at our centre and had been proven effective compared to radical radiation in a randomized study [18]. In the experimental arm, in addition to cisplatin and radiation, nimotuzumab was administered as a flat dose of 200 mg, over 1 hour in 0.9% normal saline without any premedication. Cisplatin in both arms was administered over 1 hour with adequate antiemetic cover and hydration.

HPV testing was done using p16 IHC. The procedure for performing HPV testing has been already published in the literature [19]. Interpretation of p16 was done in accordance with American pathologist consensus guidelines. Both negative and positive controls were performed while performing p16 IHC for each batch for quality assurance.

All patients, post consenting, underwent screening procedures, which were complete blood count, renal function tests, liver function test, viral serology, pure tone audiometry, dental examination, speech – swallowing function testing, nutritional status examination and evaluation by a social worker for compliance. All patients underwent an examination under anesthesia for mucosal disease assessment and a contrast enhanced computed tomography (CECT) neck with upper thorax for staging. In patients who had N2 nodes, the imaging used as positron emission tomography (PET). The radiation was administered either via conventional 2-D technique or 3-D technique. Use of intensity-modulated radiotherapy was permitted as per physician’s discretion. The patients were assessed each week during the treatment phase. Post-treatment completion at 8 weeks, patients were assessed in a joint clinic with a PET. Further follow up was according to the study protocol. The patients were followed up until death.

Descriptive statistics were performed. Nominal and ordinal data between both arms were compared using Fischer’s test. An interaction test was performed between HPV status and outcomes (PFS, DFS, LRC, and OS). Only if the interaction test was positive (P-value of 0.05 or below), which suggested that the addition of nimotuzumab had a differential impact on outcome in accordance with HPV status, further analysis was done on HPV negative patients.

The subgroup had 187 patients. Considering a type 1 error of 5% and a type 2 of 20%, this subgroup was powered to rule out a 20% absolute improvement at 2 years in PFS, which was the primary endpoint.

Kaplan Meier method was used for estimation of the probability of PFS, LRC, and OS in each arm. The median estimates with the 95% confidence interval (CI) were reported. The 95%CI was calculated in accordance with Brookmeyer and Crowley method. The unadjusted hazard ratio (HR) and adjusted HR (adjusted for prognostic factors) with its 95%CI interval were calculated using the COX regression analysis with Efron’s method of tie handling, with CRT arm being considered as reference. The assumptions of proportional hazard model were checked using Schoenfeld residuals and assumptions were met for PFS and LRC. However, the assumption was violated for OS. Hence mean overall survival between the 2 arms were calculated using the restricted mean survival method. The difference between the restricted means between the 2 arms with its 95%CI were calculated. A p-value of 0.05 or below was considered as significant.

The addition of nimotuzumab to weekly cisplatin-radiation improves outcomes inclusive of OS in HPV negative oropharyngeal cancers and this regimen should be considered as standard if 3 weekly cisplatin 100 mg/m2 regimen is not used.

We thank Biocon Ltd and the Tata Memorial Center Research Administration Council for funding this study. The funding agency had no role in design and conduct of the study, collection, management, analysis, and interpretation of the data, preparation, review or approval of the manuscript, and decision to submit the manuscript for publication.