Tumor necrosis factor-related apoptosis-inducing ligand (TRAIL) binds to death receptors (DR4 and DR5) and non-apoptosis-inducing decoy receptors (DcR1 and DcR2). TRAIL induces apoptosis in various cancer cells but has no effect in the majority of normal cells, which is supported by the presence of large numbers of death receptors (DR4 and DR5) on cancer cells [1]. However, many cancer cells have resistance to TRAIL-mediated apoptosis. A number of studies reported the mechanisms of TRAIL resistance in cancer cells. First, down-regulation of death receptors (DR4 and DR5) is related with TRAIL resistance. Second, expression of anti-apoptotic proteins, including c-FLIP, the anti-apoptotic Bcl-2 family proteins (Bcl-2 and Bcl-xL) and the inhibitor of apoptosis proteins (IAPs) were up-regulated. Third, expression of pro-apoptotic proteins, such as Bax, Bim, and PUMA, were reduced [1–5]. Finally, PI3K/Akt and NF-κB signaling pathways, which is involved in cellular survival, are activated [6, 7]. Therefore, strategy of combination treatment to overcome TRAIL resistance is needed.

In this study, we investigated effect of carnosic acid on TRAIL-mediated apoptosis and molecular mechanisms of TRAIL-sensitization in human renal carcinoma Caki cells. 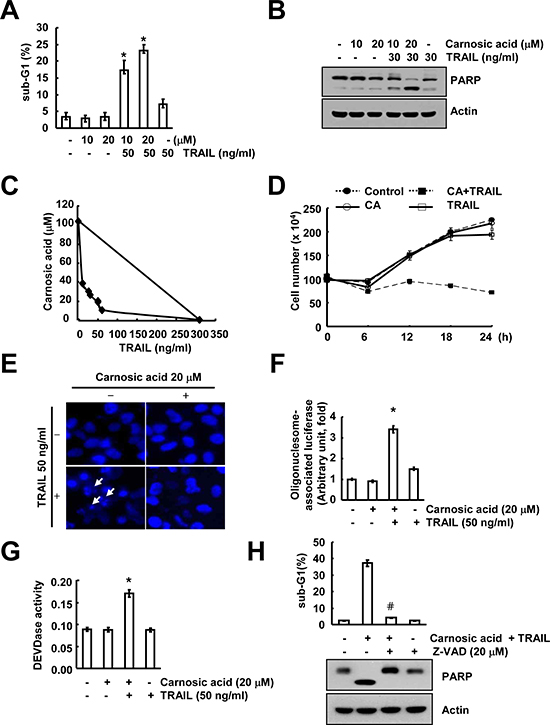 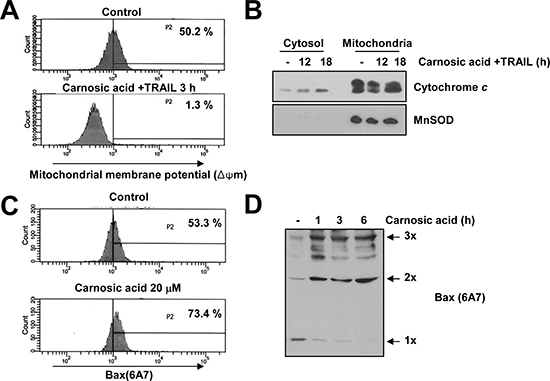 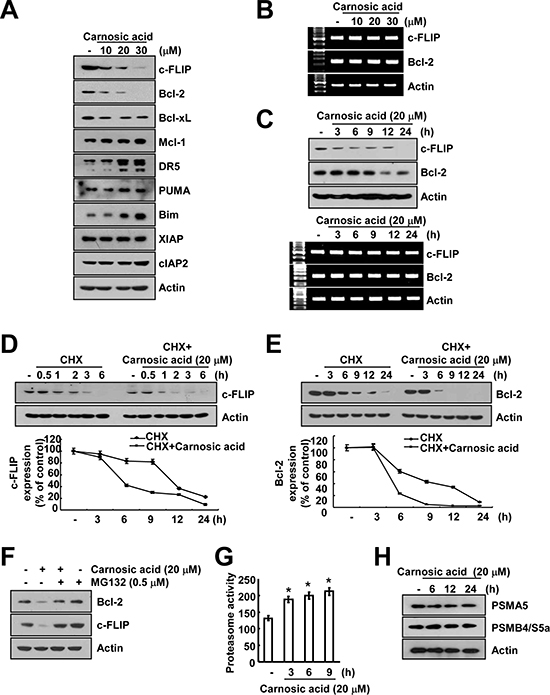 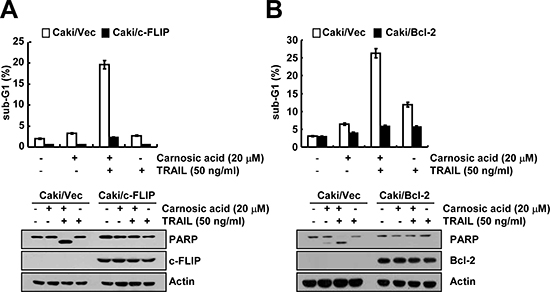 Figure 4: The down-regulation of c-FLIP and Bcl-2 by carnosic acid is associated with the induction of TRAIL-mediated apoptosis. (A and B) Vector cells (Caki/vector), c-FLIP overexpressed cells (Caki/cFLIP), and Bcl-2 overexpressed cells (Caki/Bcl-2) were treated with 50 ng/ml TRAIL in the presence or absence of 20 μM carnosic acid for 24 h. The level of apoptosis was analyzed by the sub-G1 fraction using flow cytometry (upper panel). The protein expression levels of PARP, c-FLIP, Bcl-2 and/or actin were determined by Western blotting. The level of actin was used as a loading control (lower panel).

Carnosic acid sensitizes to TRAIL-mediated apoptosis in other cancer cells, but not normal cells 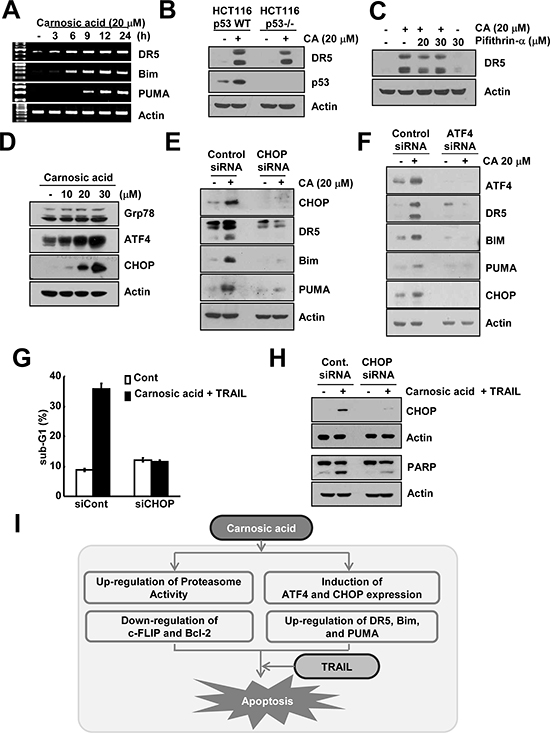 Collectively, our results demonstrate that carnosic acid sensitizes to TRAIL-induced apoptosis through down-regulation of c-FLIP and Bcl-2 at the post-translational levels, and CHOP-dependent up-regulation of DR5, Bim, and PUMA expression at the transcriptional levels. 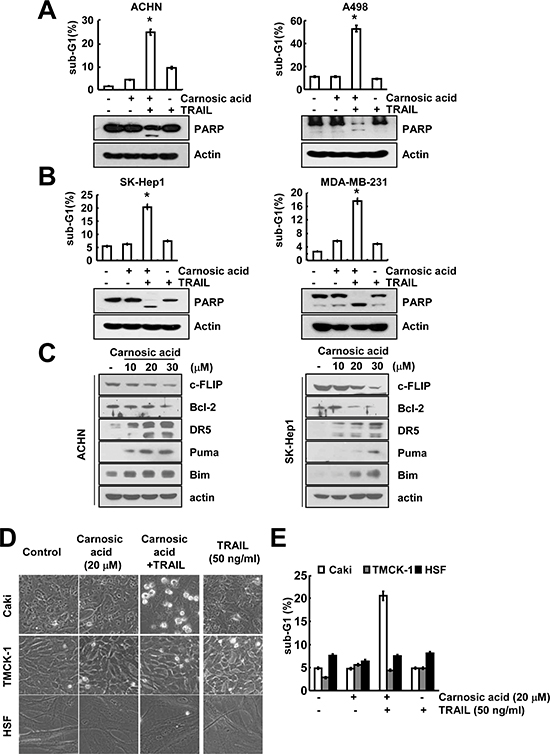 For flow cytometry, the cells were resuspended in 100 μl of phosphate-buffered saline (PBS), and 200 μl of 95% ethanol was added while the cells were being vortexed. The cells were then incubated at 4°C for 1 h, washed with PBS, resuspended in 250 μl of 1.12% sodium citrate buffer (pH 8.4) with 12.5 μg of RNase and incubated for an additional 30 min at 37°C. The cellular DNA was then stained by adding 250 μl of a propidium iodide solution (50 μg/ml) to the cells for 30 min at room temperature. The stained cells were analyzed by fluorescent-activated cell sorting on a FACScan flow cytometer to determine the relative DNA content, which was based on the red fluorescence intensity.

For the Western blotting experiments, the cells were washed with cold PBS and lysed on ice in modified RIPA buffer (50 mM Tris-HCl pH 7.4, 1% NP-40, 0.25% Na-deoxycholate, 150 mM NaCl, 1 mM Na3VO4, and 1 mM NaF) containing protease inhibitors (100 μM phenylmethylsulfonyl fluoride, 10 μg/ml leupeptin, 10 μg/ml pepstatin, and 2 mM EDTA). The lysates were centrifuged at 10,000 x g for 10 min at 4°C, and the supernatant fractions were collected. The proteins were separated by SDS-PAGE electrophoresis and transferred to Immobilon-P membranes. The specific proteins were detected using an enhanced chemiluminescence (ECL) Western blotting kit according to the manufacturer’s instructions.

The number of viable cells was determined by trypan blue exclusion at the indicated time interval using a hemocytometer. The possible synergistic effect of carnosic acid and TRAIL was evaluated using the isobologram method. In brief, the cells were treated with different concentrations of carnosic acid and TRAIL alone or in combination. After 24 h, XTT assay was employed to measure the cell viability using WelCount Cell Viability Assay Kit (WelGENE, Daegu, Korea). In brief, reagent was added to each well and was then measured with a multi-well plate reader (at 450 nm/690 nm). Relative survival was assessed and the concentration effect curves were used to determine the IC50 (the half-maximal inhibitory concentration) values for each drug alone and in combination with a fixed concentration of the second agent [36].

To examine cellular nuclei, the cells were fixed with 1% paraformaldehyde on glass slides for 30 min at room temperature. After the fixation, the cells were washed with PBS and a 300 nM 4′,6′-diamidino-2-phenylindole solution (Roche, Mannheim, Germany) was added to the fixed cells for 5 min. After the nuclei were stained, the cells were examined by fluorescence microscopy.

The cell death detection ELISA plus kit (Boerhringer Mannheim; Indianapolis, IN) was used to determine the level of apoptosis by detecting fragmented DNA within the nuclei of carnosic acid-treated cells, TRAIL-treated cells, or cells that had been treated with a combination of carnosic acid and TRAIL. Briefly, each culture plate was centrifuged for 10 min at 200 × g, the supernatant was removed, and the cell pellet was lysed for 30 min. Then, the plate was centrifuged again at 200 × g for 10 min, and the supernatant that contained the cytoplasmic histone-associated DNA fragments was collected and incubated with an immobilized anti-histone antibody. The reaction products were incubated with a peroxidase substrate for 5 min and measured by spectrophotometry at 405 and 490 nm (reference wavelength) with a microplate reader. The signals in the wells containing the substrate alone were subtracted as the background.

To evaluate DEVDase activity, cell lysates were prepared after their respective treatments with TRAIL in the presence or absence of carnosic acid. Assays were performed in 96-well microtiter plates by incubating 20 μg of cell lysates in 100 μl of reaction buffer (1% NP-40, 20 mM Tris-HCl, pH 7.5, 137 mM NaCl, 10% glycerol) containing a caspase substrate [Asp-Glu-Val-Asp-chromophore-p-nitroanilide (DVAD-pNA)] at 5 μM. Lysates were incubated at 37°C for 2 h. Thereafter, the absorbance at 405 nm was measured with a spectrophotometer.

Assay for BAX activation and oligomerization

For the analysis of Bax activation, a primary antibody specific for the Bax N-terminal domain was applied in flow cytometry. Caki cells were harvested by trypsinization, fixed with 4% paraformaldehyde for 30 min, and incubated for 1 h at 4°C with the Bax-(6A7) antibody (1:100) in PBS/1% FCS + 0.1% saponine. After incubation with the secondary antibody, washing and re-suspension in PBS/1% FCS, cells were measured by flow cytometry. For Bax oligomerization, the cells were suspended by conjugation buffer with 10 mM EDTA. The cell lysates were incubated with 0.2 mM bismaleimide (Thermo Scientific, Hudson, NH) at room temperature for 1 h and then extracted by lysis buffer for Western blot analysis.

Determination of the mitochondrial membrane potential by DiOC6

DiOC6 (3,3-dihexyloxacarbocyanine iodide, Molecular Probes) uptake by mitochondria is directly proportional to its membrane potential. Caki cells were incubated with DiOC6 (1 μM) for 10 min in dark at 37°C. The cells were harvested and suspended in PBS. The mitochondrial membrane potential was subsequently analyzed using a Flow cytometer (Becton-Dickinson, Franklin Lakes, NJ, USA) with excitation and emission settings of 488 and 525 nm, respectively.

The Caki cells were stably transfected with pMAX-Bcl-2 (provided by Dr. Rakesh Srivastava, NIH/NIA), pcDNA 3.1-c-FLIP or control plasmid pcDNA 3.1 vector using LipofectAMINE2000 as recommended by the manufacturer (Invitrogen Carlsbad, CA). After 48 h of incubation, transfected cells were selected in cell culture medium containing 700 μg/ml G418 (Invitrogen). After 2 or 3 weeks, to eliminate the possibility of clonal differences between the generated stable cell lines, the pooled Caki/pcDNA 3.1 and Caki/Bcl-2, Caki/c-FLIP clones were tested for Bcl-2 and c-FLIP expression by immunoblotting, and the cells were used in this study.

The band intensities were scanned and quantified using the gel analysis plugin for the open source software ImageJ 1.46 (Imaging Processing and Analysis in Java; http://rsb.info.nih.gov/ij).

This work was supported by an NRF grant funded by the Korea Government (MSIP) (2014R1A5A2010008) and a 2014 Scholar Research Grant from Keimyung University.

3. Ng CP, Zisman A, Bonavida B. Synergy is achieved by complementation with Apo2L/TRAIL and actinomycin D in Apo2L/TRAIL-mediated apoptosis of prostate cancer cells: role of XIAP in resistance. Prostate. 2002; 53:286–299.

34. Kaufman RJ. Stress signaling from the lumen of the endoplasmic reticulum: coordination of gene transcriptional and translational controls. Genes & development. 1999; 13:1211–1233.