We identified several molecular signatures of potential clinical significance for therapeutic targeting and prognostication in PanNETs warranting prospective validation. Our findings are hypothesis generating and can inform larger molecular profiling efforts in PanNETs.

Pancreatic neuroendocrine tumors (PanNETs) have been established as a molecularly targetable group of cancers with approved inhibitors of mTOR and VEGFR/PDGFR/c-Kit that are available in the treatment paradigm for unresectable or advanced, well-differentiated disease [1, 2]. Comprehensive genomic profiling of 68 non-metastatic and metastatic PanNETs provided amongst the first glimpses of the molecular landscape for this malignancy and identified frequently recurring somatic mutations in MEN1 (44.1%), DAXX (25%), ATRX (17.6%), TSC2 (8.8%), PTEN (7.3%), and PIK3CA (1.4%) [3].

Despite the results of these landmark studies that have provided a framework for defining the most frequently altered genes and molecular pathways in PanNETs, their relationships to clinicopathologic characteristics remain poorly described. In this study, we describe our experience in cataloging alterations identified through multiplatform profiling of a cohort of predominantly locally advanced and metastatic PanNETs. In particular, we focused our analysis on co-occurring alterations of known pathogenicity and correlating molecular and pathway alterations with various clinicopathologic factors. We believe these analyses to be important in further defining molecular signatures and patient subsets of potential clinical relevance to PanNET management.

From 12/2014–12/2018, a total of 46 patients diagnosed with predominantly locally advanced and metastatic PanNETs were included in this study (Table 1). The median age was 52 years (range 30–79) and the majority of cases (65%) were low or intermediate grade.

+Same alteration can occur in more than 1 patient.

Cluster analysis allowed generation of a heatmap to visualize putative correlations across clinicopathologic variables in our PanNET cohort (Figure 1). Notably, NGS alterations in MEN1 and DAXX, both components of the chromatin remodeling pathway, tend to co-occur in non-metastatic, well-differentiated/intermediate grade PanNETS. NGS alterations in TP53 and RB1 tended to co-occur in high-grade tumors. SETD2 was mutually exclusive of these alterations within other low-grade tumors. No other associations across clinicopathologic variables and genomic alterations/IHC expression reached statistical significance beyond those described in Table 3. 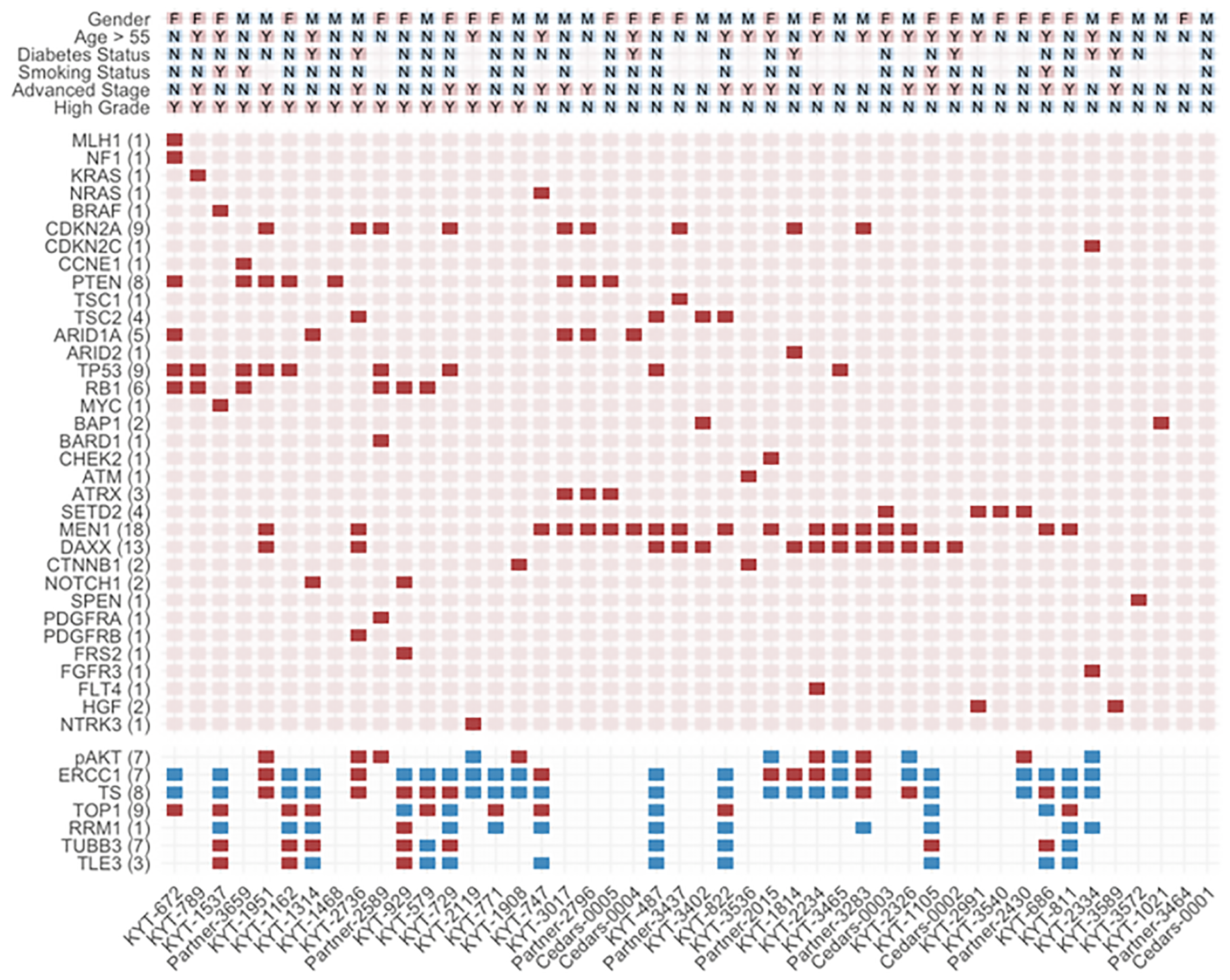 Molecular alterations in the replicative stress pathway were the only variables demonstrating significant correlation with worse OS in our PanNET cohort (Figure 2, hazard ratio (HR) 13.62 [95% confidence interval (CI): 1.51-122.5], p = 0.0198). This finding was primarily driven by alterations in TP53 and RB1. No variables were significantly correlated with progression-free survival (PFS) in our analysis. 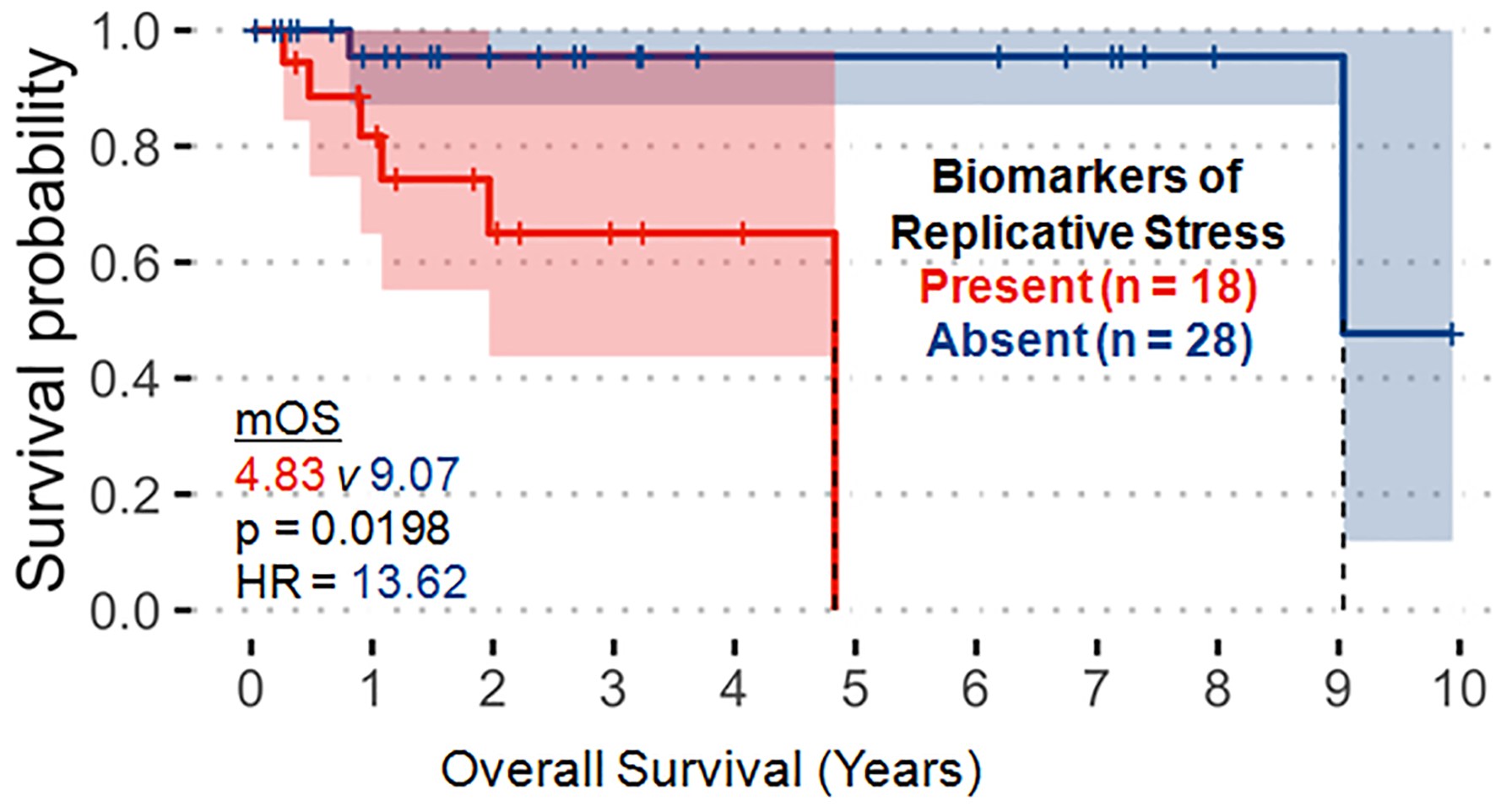 Beyond well-established germline mutations, PanNETs are increasingly recognized as molecularly-driven tumors with somatic mutations affecting chromatin remodeling (MEN1, DAXX, and ATRX) and mTOR signaling (PTEN and TSC1/2) as key oncogenic drivers [5]. Associations between clinicopathologic factors and genomic and proteomic signatures, however, remain poorly described and most large-scale studies have limited their focus on correlating DAXX/ATRX to prognostic variables [3, 4, 6, 7]. To the best of our knowledge, we are among the first to evaluate associations of molecular alterations across a spectrum of clinicopathologic variables and identify co-occurring pathogenic mutations and altered molecular pathways of potential clinical significance in PanNETs.

Alterations in MEN1 and DAXX correlate with prognostic variables

Tumor stage and grade have long been known to be the most important independent predictors of survival in PanNETs [8, 9]. Our correlative analyses identified several significant associations with these 2 prognostic variables (Table 3). Alterations in MEN1 (NGS) were less associated with having high-grade PanNETs and metastatic disease at diagnosis. NGS alterations in MEN1 and DAXX, both components of the chromatin remodeling pathway, tend to co-occur in non-metastatic and well-differentiated/intermediate-grade PanNETs as visualized by hierarchical clustering (Figure 1), and a significant association between MEN1 and DAXX was reached on pairwise comparisons (Table 3). Mutations in ATRX have been shown to be mutually exclusive to DAXX mutations and were excluded from our analysis [4].

Our potential positive prognostic signature with MEN1 and DAXX alterations by NGS are consistent with an earlier NGS study that showed that alterations in MEN1, DAXX/ATRX, or the combination of were significantly associated with prolonged survival, in contrast to tumors lacking such mutations, in a metastatic PanNET cohort [3]. In predominantly non-metastatic and well-differentiated/intermediate grade PanNETs, however, loss of DAXX/ATRX by IHC correlated with higher tumor grade and stage, risk for metastasis, and worse survival [6, 7]. Recently, the ICGC analysis identified that median overall survival (OS) was not significantly different between DAXX/ATRX-mutant and -wild-type tumors, although DAXX/ATRX-mutant World Health Organization (WHO) grade 2 tumors had significantly worse OS compared to wild-type tumors [4]. Further study is needed to resolve this controversy regarding the prognostic value of chromatin remodeling alterations including MEN1, DAXX, and ATRX, which may be tumor stage and grade-specific. SETD2 was mutually exclusive of DAXX and MEN1 alterations within low-grade tumors in our cohort; the prognostic significance of this alteration may need further validation in larger PanNET cohorts.

On our OS analysis, only alterations in the replicative stress pathway were significantly correlated with worse survival (Figure 2). Having an altered replicative stress pathway correlated with high-grade disease as well. Notably, these observations were primarily driven by TP53 (NGS) and RB1 (NGS) alterations, of which both were significantly associated with high-grade disease on pairwise comparison (Table 3) and co-occurred in high-grade tumors (Figure 1). Abnormal expression of TP53 and RB1 have been shown to define poorly differentiated PanNETs with worse disease-specific survival compared to loss of DAXX or ATRX in well-differentiated PanNETs which have much better survival [10].

Other associations of potential clinical significance

We identified several other significant correlations of potential clinical importance on pairwise comparisons (Table 3): history of diabetes with CDK (positive correlation) or replicative stress pathway alterations (negative correlation), age >54 with non-metastatic disease, ERCC1 expression (IHC) with DAXX or MEN1 alterations (NGS), and PTEN (NGS) with ARID1A or TP53 alterations (NGS). ERCC1 expression has been shown to be putative prognostic and predictive biomarkers across various solid malignancies [14, 15]. In our series, ERCC1 expression positively correlated with favorable prognostic alterations (DAXX and MEN1). In separate studies of PanNET patients, loss of PTEN and ARID1A were associated with poorer prognosis [16, 17]. This appears consistent with our findings where PTEN co-occurred with ARID1A as well as the unfavorable prognostic TP53 alteration.

The rationale behind the associations between a history of diabetes and alterations in the CDK or replicative stress pathway are unclear, but an altered replicative stress pathway portended to a poorer OS in our cohort (Figure 2). Age >54 was significantly less associated with metastatic disease at diagnosis (Table 3). This finding is contradictory to evidence where increasing age has historically portended a worse prognosis in large PanNET cohorts [8, 9]. Instead, this finding is more likely due to the fact that the majority of our metastatic or high-grade PanNET patients were age ≤54 (Figure 1). The tendency for these molecular alterations and clinicopathologic features of various prognostic/predictive significance to co-occur in our cohort are hypothesis generating and provide impetus for subsequent validation in larger cohorts to define combinations of genomic/proteomic signatures of greatest prognostic and/or predictive value in PanNETs.

Lastly, it should be noted that this study was limited by its retrospective design and heterogeneity across patient characteristics and tumor biology. Our decision to include pathogenic variations only for analysis likely further limited our sample size though we believed this decision was justified in conducting our survival and correlative analyses to prognostic variables. Nevertheless, we identified several molecular signatures through multi-omic profiling of potential clinical significance that are hypothesis generating and can inform future investigations of larger and ideally prospective design. Increasing efforts to molecularly profile PanNETs will enhance the possibility to stratify PanNET patients into molecularly-defined treatment subgroups based on prognostic and predictive biomarkers.

Informed consent was obtained from patients with pancreatic cancers through an IRB-approved protocol that facilitated the collection of real-world outcomes for research purposes. Patients diagnosed with histologically-confirmed pancreatic neuroendocrine tumors (PanNETs) were referred to Perthera, Inc. (McLean, VA) between 12/2014–12/2018 by their treating physician at a partnering institution or via the Pancreatic Cancer Action Network’s Know Your Tumor® (KYT) program (Figure 3). Participating patients received personalized treatment recommendations from Perthera’s molecular tumor board based on CLIA/CAP-certified genomic and proteomic testing results that were ordered from commercial testing laboratories. The analysis cohort in this study included histologically confirmed cases of PanNET in which NGS testing results were considered adequately sensitive. Multiplatform profiling data was also available for all but 19 PanNET cases which included IHC protein testing results for chemopredictive markers (e.g. RRM1, ERCC1, TYMS) and other predictive markers (PD-L1, HER2). All PanNET cases were categorized based on the WHO criteria [18]. There were no exclusions to site of biopsy, previous treatment or lines of prior therapy, disease stage, medical comorbidities, or performance status.

The processing of formalin-fixed paraffin-embedded (FFPE) tissues was performed in accordance to requirements per specific platform as previously described [19, 20]. NGS was performed on submitted tumor samples through FoundationOne (Foundation Medicine, Inc., Cambridge, MA). The FoundationOne NGS assay, which detects all 4 classes of genomic alterations including base substitutions, insertions and deletions, copy number alterations (CNAs), and rearrangements, has been previously described and validated [19]. Analysis by IHC was performed on FFPE tumor tissues through Caris Life Sciences (Phoenix, AZ) and NeoGenomics, Inc. (Fort Myers, FL) using commercially available detection kits and autostainers along with commercially available antibodies as previously described [20–22].

We wish to acknowledge the Pancreatic Cancer Action Network (PanCAN), PanCAN’s Patient Central and Know Your Tumor initiatives, and the patients and their families who were involved in this study.