Pancreatic ductal adenocarcinoma (PDAC) exhibits a very early onset of metastasis. Thus, early detection and treatment are pivotal to successful eradication of pancreatic cancers. Economical and non-invasive cancer screening systems is indispensable for this purpose. Previously our group developed a novel method to detect various kinds of human cancer using nematode Caenorhabditis elegans (C. elegans) that respond to cancer odor in urine; however, whether this method is useful for non-human species remains to be understood. In this study, we examined its effectiveness in the detection of murine pancreatic tumor spontaneously generated in genetically-engineered mice. We generated pancreas-specific KrasG12D and/or c-Met deletion mutant mice and measured the probability of spontaneous tumor generation in these mice. The chemotactic indexes of C. elegans to the urine samples of these mutant mice were measured. As previously described, oncogenic KrasG12D was necessary to induce pancreatic intraepithelial neoplasia in this mouse model, while c-Met mutation did not show further effect. The chemotactic analysis indicated that C. elegans avoids urine of healthy recipient mice, while they tended to be attracted to urine of mice with KrasG12D. Our study demonstrated that C. elegans can recognize the odor of pancreatic cancer in urine of KrasG12D model mouse, suggesting the similarity of cancer odor between species. Our result facilitates further studies on mechanism of cancer detection by C. elegans.

Pancreatic ductal adenocarcinoma (PDAC) is one of the most lethal cancers, and the fourth most common cause of cancer death across the world [1–2]. Complete surgical resection is the only way for long-term survival of the patients of PDAC. However, 5-year-survival rate of curative pancreatic cancer has not improved substantially in the past 30 years [1–3]. One reason why pancreatic cancer has a dismal prognosis may be asymptomatic nature of the disease. Many of PDAC patients have metastases at the time of diagnosis [2]. Thus, early-stage diagnosis of PDAC is definitely important to improve its prognosis.

Recent progress in the study of genetically-engineered mouse model (GEMM) revealed the process of pancreatic tumorigenesis and enabled us to detect minimal change in early stage of PDAC [5]. It was reported that epithelial-to-mesenchymal transition (EMT) and dissemination precede pancreatic tumor formation in spontaneous tumor mice model [6, 7]. Nearly all PDAC and a high percentage of early pancreatic intraepithelial neoplasia (PanIN) lesions have KRAS mutations. It was reported that seeding and propagation of untransformed mouse mammary cells having Kras mutation in the lung [8]. The human acinar-to-ductal metaplasia (ADM)-to-PanIN-to-PDAC progression has been recapitulated using GEMMs [9, 10].

C. elegans has a highly developed chemosensory system and can detect a wide variety of volatile and water-soluble chemicals associated with food, danger, or other animals. Because of its short lifespan and hermaphroditic nature, C. elegans is easy to be maintained in laboratories and therefore widely used as genetic model in research. Previously, we found that C. elegans can detect the odor of cancer in urine of cancer patients [11, 12]. Based on this finding, we developed a novel and highly accurate cancer detection system, Nematode Scent Detection Test (NSDT) that is also economical, painless, rapid and convenient. In our report among 20 cancer patients tested, six cases were early stage cancer (stage 0 or 1), suggesting that NSDT can be used for screening of early cancer. However, our data contained only one patient with pancreatic cancer, which was at advanced stage. Thus, the effectiveness of C. elegans to detect early stage of pancreatic cancer has not been fully analyzed.

In mice, various kinds of strains that develop pancreatic tumor have been reported. Therefore, we decided to assess the possibility of NSDT to detect pancreatic tumor using mouse model. Oncogene Kras plays a role in the generation of pancreatic cancer, and its activation is observed in >95% cases of PDAC patients [2]. KrasG12D point mutation allele is commonly associate with human cancer and leads to a constitutive active form of Kras. On the other hand, c-Met is involved in the chemotherapy resistant phonotype of pancreatic cancer [13, 14]. Therefore, we have generated mutation of Kras in pancreas specific manner in mice, which was compared with pancreas specific deletion of c-Met, as described [14].

We used a Cre-loxP-based mouse model of PDAC to assess the possibility of C. elegans to detect the putative odours from tumor-bearing mice. First, we assessed the tumorigenicity of oncogenic KRasG12D mice in which KrasG12D oncogene was specifically introduced in pancreas. As shown in Figure 1, 3 out of 12 (25%) KrasG12D mice have developed pancreatic tumor. Then we crossed KrasG12D mice with c-Met mutant mice to obtain KRasG12D/c-Met double mutant mice, and assessed the tumorigenicity. 8 out of 13 (61.5%) KRasG12D/c-Met mice have developed pancreatic tumor (Figure 1). The occurrence of tumors was not affected by c-Met deletion. These results demonstrated that spontaneous tumor was observed only in KrasG12D –bearing mice, suggesting that KrasG12D mutation is necessary for the development of pancreatic tumor [13–15] (Table 1). We then used urines from these mice for the assessment of cancer detection by C. elegans.

Detection of tumor in mice by C. elegans scent

To test the possibility that C. elegans can detect odors of tumor generated in these mouse models, we performed the chemotaxis assay (Figure 2A). Our previous study demonstrated that chemotactic response of C. elegans to serum was not significantly different between healthy volunteers and cancer patients at any concentrations. This may be due to the presence of other odorants or molecules in the serum that mask the smell of tumor-derived molecules. Therefore, in the current mouse study, we used urine to confirm the result of human study. As the urinary concentration of mice is higher than that of human, samples were diluted at 10−2 and 10−3 before analysis [16]. Although the magnitudes of chemotactic responses were less than human cases, C. elegans showed avoidance against urine from healthy control littermates (Figure 2B, 2C). c-Met deletion exhibited only minimal effects on these chemotactic responses (Figure 2B, 2C). C. elegans showed very weak attraction to only 2 out of 9 urine samples collected from c-Met mutant mice at 10−3 concentration. In contrast, the chemotactic index of C. elegans to urine from KrasG12D mutation mice was significantly higher compared to urine of KrasG12D-negative control mice (Figure 2B, 2C). Five out of 7 urine samples from KrasG12D-positive mice attracted C. elegans at either 10−3 or 10−4 concentration, indicating that the sensitivity of this analysis to detect tumor is 71.4%. On the contrary, 2 out of 12 KrasG12D-negative mice attracted C. elegans, showing that the specificity of this analysis is 83.3%. These results suggest that volatile odor would be present only in mice with KrasG12D and suggest the possibility that the molecule would be downstream of KrasG12D gene. Given that Kras gene controls the metabolic flux of glutamine in pancreatic cancer cells, we are interested in whether any detectable metabolites might influence on the behaviors of C. elegans [12]. 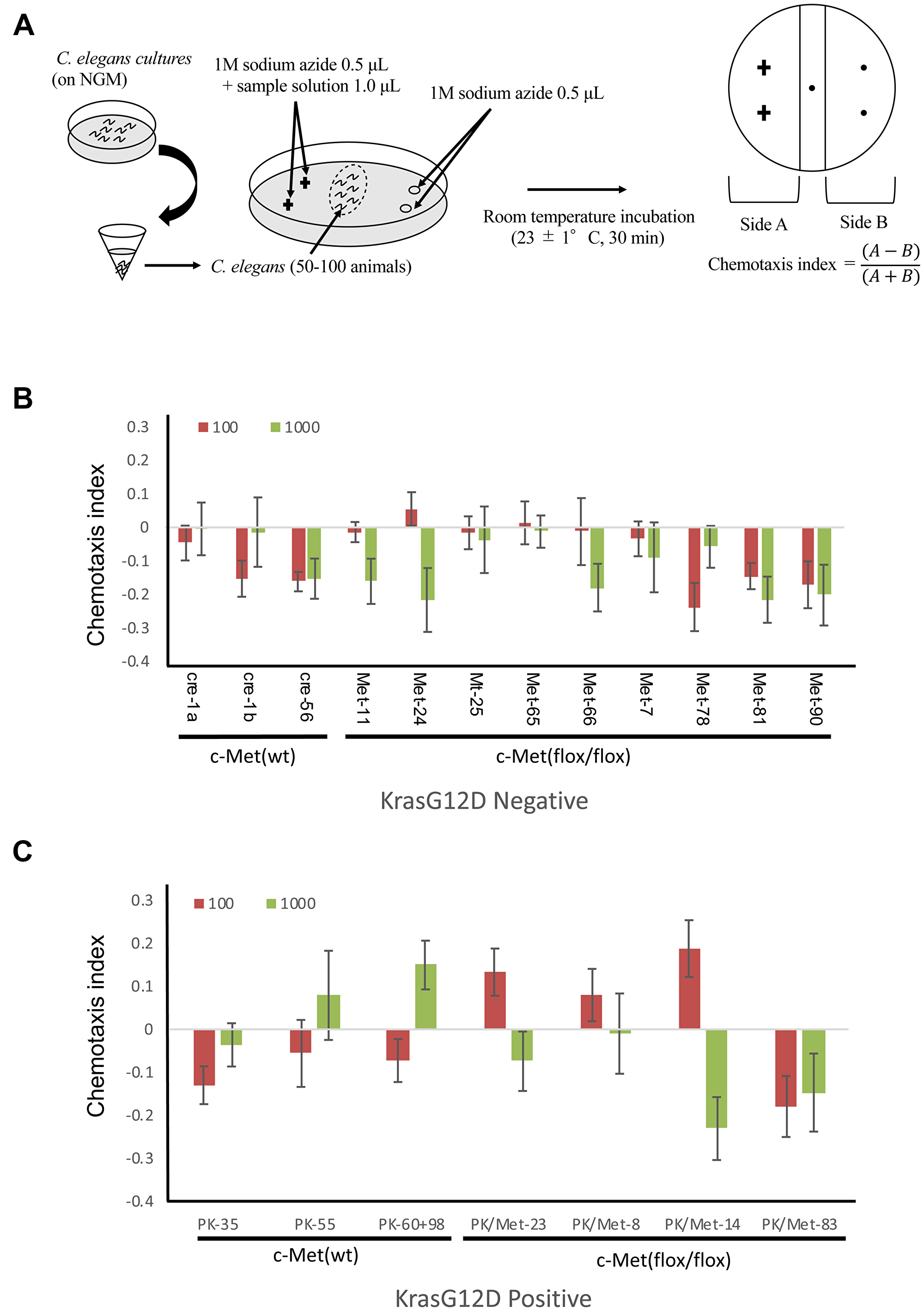 Identification of volatile biomarkers for disease diagnosis, including various kinds of cancers, is an area of great interest and promise. Originally, it was reported that trained dogs can discriminate odor of cancer patients from healthy control. Several studies demonstrated that dogs can detect odor of various cancers including colon, melanoma, bladder, lung, breast and ovarian cancer in patients’ urine or breath. However, considering the time and the cost required for dog education, it may be difficult to introduce canine scent detection into clinical practices. We have previously reported that C. elegans can effectively detect the odor of cancer in human urine [12]. In the present study, we demonstrated that C. elegans can also distinguish the odor of genetically-engineered mice from control siblings. The magnitude of chemotactic responses of C. elegans for murine urine (−0.25 to 0.2) was lower compared to that for human samples (−0.3 to 0.4). In addition, sensitivity (71.4%) as well as specificity (83.3%) of the analysis are not as high as for human samples (95.8% and 95.0%, respectively).

The reason of this difference may be the specie specificity of cancer odorants. The further study will be necessary to confirm this hypothesis.

The lines of our studies showed that C. elegans has a potential to detect volatile components in urine from cancer bearing conditions, although the molecular characteristics of the components have not been identified. Moreover, we demonstrated in this study that C. elegans has potential to detect cancer odors across species, both for human and murine. Limitation of current study might that we did not directly compared human and murine samples.

Our next project is to reveal the effectiveness of this system on clinical samples of various kinds of progression of PDAC patients.

The progression of PanIN to PDAC also meant that this mouse model offers the opportunity to identify precancerous lesion. Pancreatic development is initially associated with the activation of pancreatic and duodenal homeobox 1 (Pdx1). Previously, in mice bearing Pdx-1-Cre; KrasG12D; p53fl/+; RosaYFP (PKCY) mutation, which develop pancreatic ductal adenocarcinoma, it was reported that pancreatic EMT and dissemination precedes pancreatic tumor formation [10]. It would be possible to diagnose PanIN stage by C. elegans because in PKCY mice circulating tumor cells (CTC) were detected in 8 to 10-week old mice in PanIN stage. In this study, we did not assess the detection of CTC, Unresolved questions include whether diagnose using blood samples NSDT is highly economical diagnostic tool compared to traditional glycoprotein markers, such as CEA [17] and CA19-9 [17]. To detect cancer smells more precisely and quantitatively, it is necessary to identify specific cancer odours and their receptors. The reason why urine is suitable for decent detection has not been yet demonstrated.

The chemotaxis assays were performed using approximately synchronized young adult C. elegans. Grown nematode on NGM were collected in microfuge tubes and washed three times with basal buffer (5 mM potassium phosphate buffer pH 6.0, 1 mM CaCl2, 1 mM MgSO4 and 0.5 g/L gelatin). The nematode that settled at the bottom were taken and about 50–100 animals were spotted at the center of 9 cm assay plates (2.0% Bacto agar, 5 mM potassium phosphate buffer pH 6.0, 1 mM CaCl2, 1 mM MgSO4). 1 μL each of sample solution and 1 M sodium azide were spotted on two points separated by about 2.5 cm at one end of the plates. Only sodium azide was similarly spotted on the other side. The assays were conducted at the room temperature of 23 ± 1° C at 30 min. The chemotaxis index was calculated [12] (Figure 2) by using the formula, the chemotaxis index = (A − B)/ (A + B). Here, the side A was the number of animals on the sample-spotted side of the plate and B was the number of the animals on the opposite side, while animals that remained within 0.5 cm of the midline ignored to exclude immotile animals from consideration. Only well-fed nematodes were used in this study because starvation may affect their chemotactic responses.

Urine samples were obtained by utilizing small pipet and 1.5 ml Eppendorf tubes as containers and on daytime. Approximately 1 ml urine was collected from each mouse, added to a polypropylene screw cap tube and stored at −20° C until use.

Pancreas from each mouse strain were removed and fixed with formalin. Paraffin-emended tissue sections were prepared as previously demonstrated [13, 14]. The specimens were then stained with hematoxylin and eosin. All sections were viewed with a Keyence BZ-9000 (Keyence Corp.).

Differences in participants’ characteristics, laboratory data and tumour markers between the control and cancer participants were examined using the paired t-test for continuous variables and the χ2 test for dichotomized variables. A P-value of <0.05 was considered statistically significant.