Eighty DLBCL patients treated with first-line 6–8 R-CHOP courses regardless of interim imaging findings were enrolled. Each underwent FDG-PET/CT scanning at staging, and again during (Interim-PET) and at the end of (End-PET) therapy. PET positivity or negativity at Interim-PET and End-PET as related to progression-free survival (PFS) was examined using Kaplan–Meier analysis.

Mid-treatment FDG-PET/CT findings may be useful for determining disease status in patients with DLBCL undergoing induction R-CHOP chemotherapy, though are not recommended for treatment decisions as part of routine clinical practice.

Diffuse large B-cell lymphoma (DLBCL), the most common type of non-Hodgkin lymphoma worldwide, has been reported to be curable in about 60–70% of patients treated with standard rituximab, plus cyclophosphamide, doxorubicin, vincristine, and prednisone (R-CHOP) chemotherapy [1]. On the other hand, current salvage therapy strategies seem to be inadequate for nonresponding patients, with only 30% to 35% of resistant or relapsed patients in this rituximab era able to achieve prolonged progression-free survival (PFS) with high-dose chemotherapy followed by autologous stem cell transplantation (ASCT). Thus, a possible good alternative approach might be first-line risk-tailored therapy in patients with poor prognosis.

18F-fluorodeoxyglucose positron emission tomography/computed tomography (FDG-PET/CT) is a widely used imaging modality, and known to be reliable for staging and response assessment of aggressive malignant lymphomas, including DLBCL. For assessment of response, FDG-PET adds valuable information to that obtained with CT, because, unlike that modality, FDG-PET findings can often differentiate a viable tumor from posttreatment fibrosis or necrosis. Currently, FDG-PET/CT is the standard recommended method for response assessment at the end of first-line treatment, with FDG positivity at that point considered predictive of survival in patients with malignant lymphoma [2, 3]. Although previous studies have found that application of FDG-PET during therapy (Interim-PET) allows for successful PET-guided management of patients with Hodgkin lymphoma [4, 5], the use of Interim-PET for early response assessment and management of patients with DLBCL remains controversial, with varying results reported [6–20]. In the present study, we examined the predictive value of Interim-PET regarding PFS of DLBCL patients using visual dichotomous analysis. 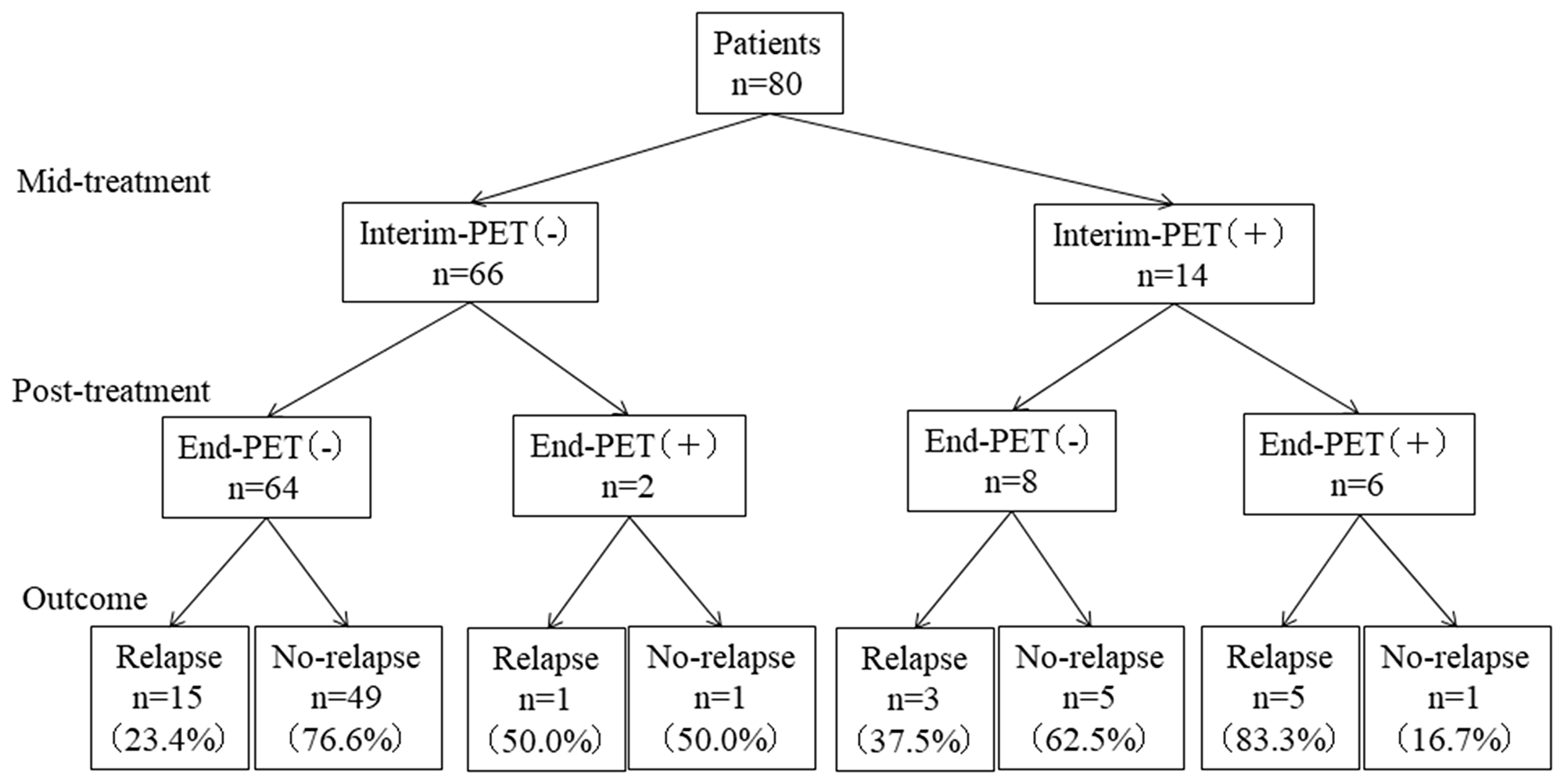 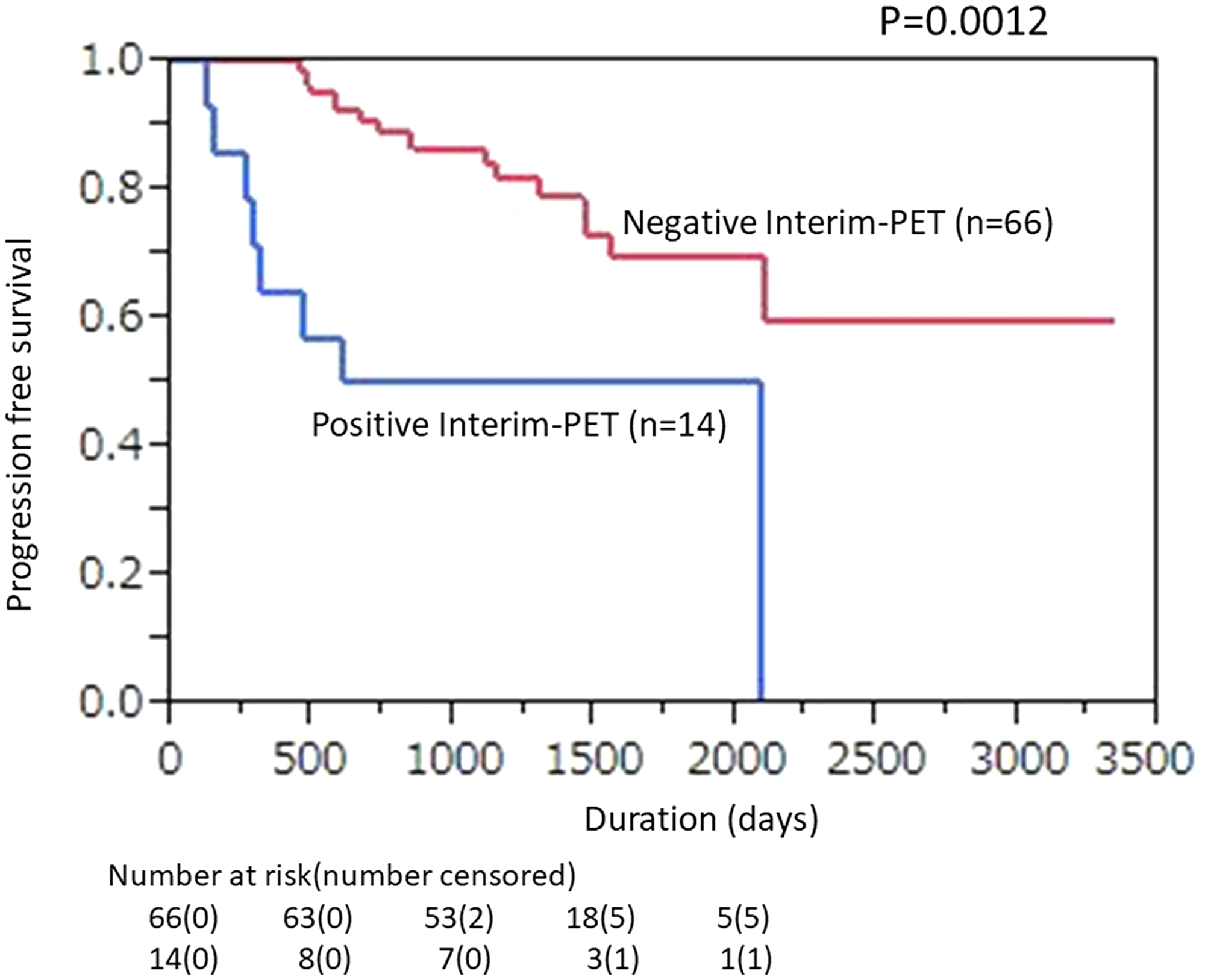 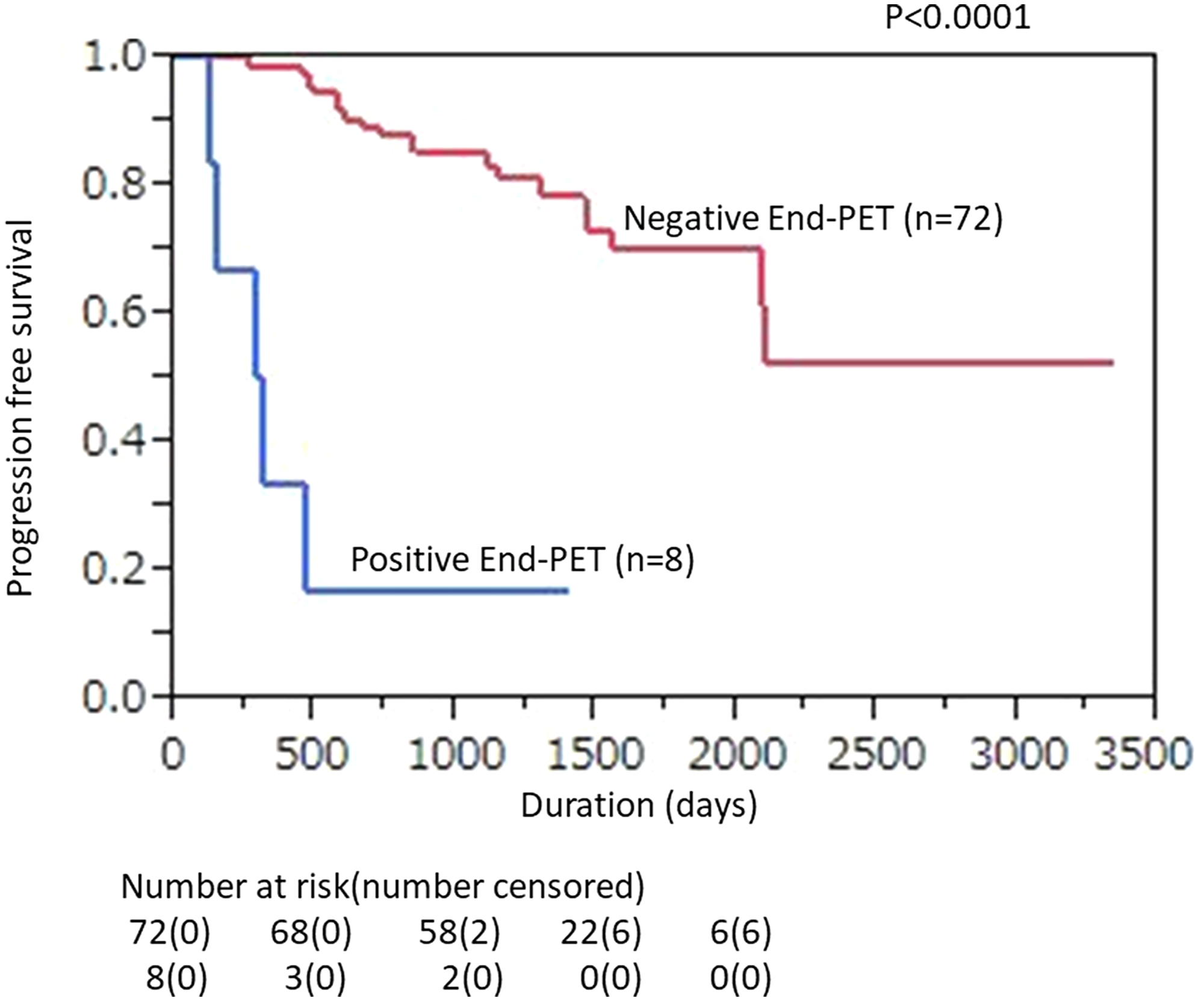 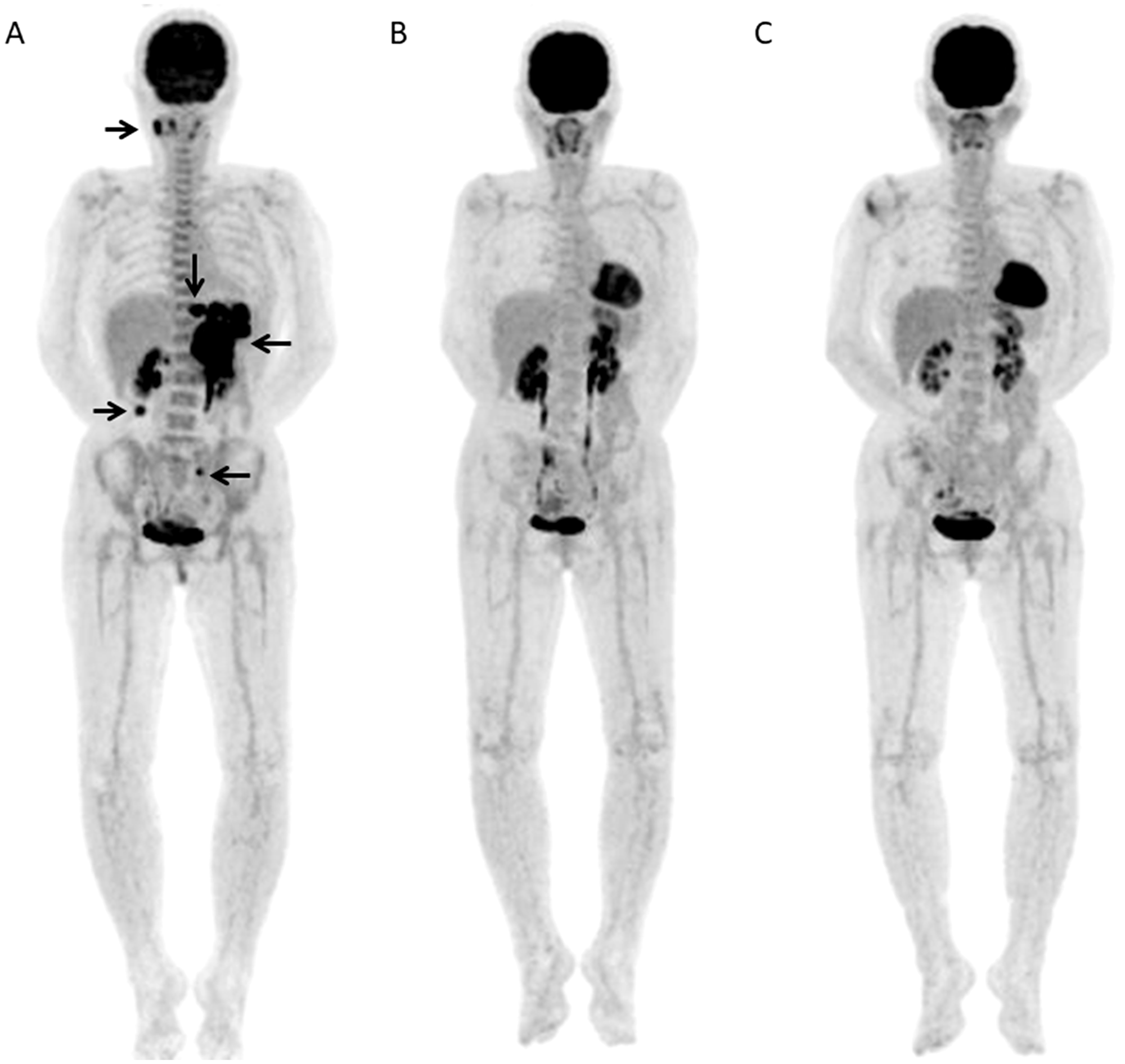 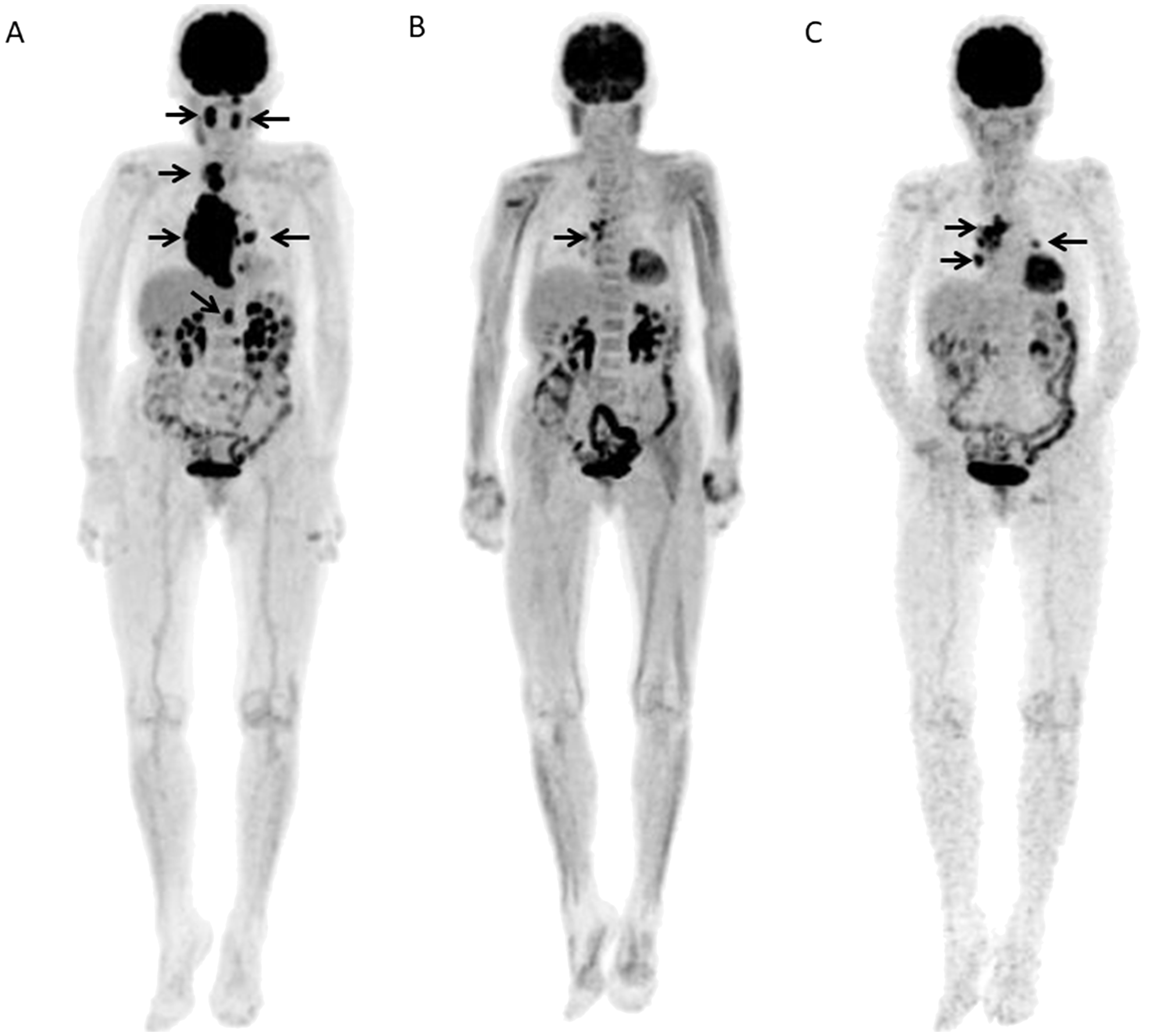 Figure 5: A 80-year-old female with DLBCL received 6 R-CHOP courses and then showed further progression at 0.41 years after the end of chemotherapy. (A) Baseline FDG-PET MIP showed several areas of abnormal FDG uptake in bilateral neck, mediastinum/hilum, and abdomen (arrows). (B) FDG-PET scan MIP after 3 courses of R-CHOP (Interim-PET) showed residual uptake in the mediastinum (arrows). (C) FDG-PET scan MIP after the chemotherapy (End-PET) showed progression of residual uptake in mediastinum and reappearance of abnormal uptake in left hilum (arrows).

Interim-PET has been reported to provide relatively good NPV and low to modest PPV findings [22]. A recent systematic review and meta-analysis demonstrated that the pooled summary false-positive proportions in patients with non-Hodgkin lymphoma were 83.0% (95% CI: 72.0%–90.2%) for Interim-PET (fixed effects, I2 = 27.7%) and 31.5% (95% CI: 3.9%–83.9%) for End-PET (random effects, I2 = 68.3%), and the authors concluded that patients with non-Hodgkin lymphoma often have a very high number of false-positive FDG-avid lesions in Interim-PET scanning findings [21]. Furthermore, Moscowitz et al. [10] analyzed Interim-PET results after 4 cycles of dose-dense R-CHOP in 97 patients with DLBCL and found that 33 of 38 found positive at the time of Interim-PET showed negativity for residual lymphoma in biopsy results.

There are some potential explanations for the high rate of false positivity. FDG does not have such a high specificity as a marker, because it is also taken up in infections and inflammatory processes, while it is also possible that use of immunotherapy may increase lesion inflammation. In addition, antibody-mediated cellular cytotoxicity and complement activation are important mechanisms related to the activity of rituximab [7, 14, 22]. Therefore, a biopsy should be considered for patients with positive PET findings if those indicate a change in treatment. On the other hand, Interim-PET is known to be associated with false-negative findings. Kwon et al. [17] investigated the prognostic value of negative Interim-PET results in 92 patients with DLBCL and found that 39.1% of cases shown negative later experienced relapse during the follow-up course (median 30.8 months).

Our study has several limitations. First, the design was retrospective and relatively few patients from a single institution were enrolled, which may have limited our ability to make generalized conclusions and introduced statistical errors. A larger prospective multicenter study is necessary to further explore and validate the potential of Interim-PET in patients with DLBCL. Second, the Interim-PET examinations were performed at different time points. Although the optimal time point remains to be established, a prospective study that utilizes the same time point of Interim-PET in the analyzed cases is needed. Third, we used the recommended standard method for evaluation of FDG-PET results, i.e., the Deauville criteria (D 5PS) [21]. On the other hand, earlier studies used custom visual criteria, such as criteria presented by the international Harmonization Project [2], the D 5PS, and maximum standardized uptake value reduction [9, 12, 15, 16, 20]. The use of different response criteria among studies makes comparisons of results challenging. We consider that consistent standardized criteria for FDG-PET/CT interpretation in this setting are needed in the future. Forth, the regimen and course of the treatment were not identical in 80 patients.

This retrospective study was approved by our institutional review board, which waived the requirement for informed consent. Eighty newly diagnosed DLBCL patients referred to 3 different hematology departments between March 2009 and December 2015 were included. Demographic and tumor-related details are shown in Table 1. Each underwent FDG-PET/CT scanning at staging, then again during (Interim-PET) and at the end of (End-PET) therapy at Hyogo College of Medicine Hospital. Among all of the cases, Interim-PET was performed after 2 courses of chemotherapy for 28, after 3 courses for 34, and after 4 courses for 18 patients.

All treatments were performed according to departmental protocol. Patients were given standard R-CHOP (n = 61) or R-THP-COP (rituximab, pirarubicin, cyclophosphamide, vincristine, prednisone) (n = 19) for 6 (n = 56) or 8 (n = 24) courses. Therapy for each was performed as planned and never modified based on Interim-PET results. Involved field radiotherapy was performed to areas of bulky disease regardless of PET results (n = 8).

PET scans (Gemini GXL16 or Gemini TF64; Philips Medical Systems, Eindhoven, The Netherlands) were performed for all patients at the time of diagnosis, during (Interim-PET) after 2, 3, or 4 cycles of chemotherapy, and at the end (End-PET) of treatment at Hyogo College of Medicine Hospital. Patients were instructed to fast for 5 hours before the scan, and blood glucose was measured immediately before injection of FDG at 4.0 MBq/kg body weight for the GXL16 or 3.0 MBq/kg for the TF64. None of the present cohort had a blood glucose level greater than 150 mg/dL. Static emission images were obtained approximately 60 minutes after injection. For attenuation correction and anatomic localization, helical CT scans from the top of the head to the bottom of the feet were obtained using the following parameters: tube voltage, 120 kV; effective tube current auto-mA (up to 120 mAs for GXL16, up to 100 mAs for TF64); gantry rotation speed, 0.5 seconds; detector configuration, 16 × 1.5 mm for GXL16, or 64 × 0.625 mm for TF64); slice thickness, 2 mm; and transverse FOV, 600 mm. Immediately after completion of CT scanning, PET images of the region from the head to mid-thigh were acquired for 90 seconds per bed position and from the mid-thigh to toes for 30 seconds per bed position employing the variable sampling method. Thereafter, images at 12–14 bed positions, each for 90 seconds, and 6–7 bed positions, each for 30 seconds, were acquired in three-dimensional mode, thus requiring between 22 to 26 minutes of emission scanning per patient. The patients were allowed to breathe normally during PET acquisitions. Attenuation-corrected PET images were reconstructed using a line-of-response row-action maximum likelihood algorithm (n/a subsets, 2 iterations) for the GXL16 or an ordered-subset expectation maximization iterative reconstruction algorithm (33 subsets, 3 iterations) for the TF64.

Baseline, Interim-PET, and End-PET scan images were retrospectively reviewed by 2 experienced nuclear medicine physicians (10 and 2 years of experience with oncologic FDG-PET/CT scanning, respectively) who had no knowledge of the other imaging results, or clinical and histopathologic results other than those obtained before, during, and after chemotherapy for DLBCL, with consensus obtained by discussion.

All Interim-PET and End-PET results were interpreted as positive or negative by visual dichotomous response criteria using a 5-point score system defined as the Deauville criteria (D 5PS) [22], as follows: 1, no uptake; 2, uptake equal or less than mediastinum; 3, uptake more than mediastinum but less than liver; 4, uptake moderately increased as compared with liver at any site; 5, uptake markedly increased as compared with liver at any site and/or new site of disease. A score of 1 through 3 was regarded as indicating negative and that of 4 or 5 as indicating positive findings.

PFS was chosen as the study endpoint, and was defined as the time from diagnosis to either disease progression or relapse, or to death from any cause. Data were censored if the patient was alive and free of progression/relapse at the final follow-up examination. Survival curves were calculated using the method of Kaplan and Meier according to the Interim-PET or End-PET result (positive vs. negative). Log-rank tests were performed, with p-values obtained to estimate survival probability after 2 years.

Each test was 2-sided and the level of significance was set at 0.05. All analyses were performed using SAS software.

All included patients gave written and informed consent for the diagnostic procedure. Due to the retrospective character of the patient data evaluation ethical commitment was waived by the institutional ethics board.

In conclusion, mid-treatment FDG-PET/CT may prove useful for providing predictive information for patients with DLBCL undergoing R-CHOP chemotherapy. Nevertheless, a larger prospective multicenter study is necessary to further explore and validate the potential of Interim-PET in patients with DLBCL. Furthermore, mid-treatment FDG-PET/CT results should not be used at this time in routine clinical practice to make treatment decisions.

This work was supported by JSPS KAKENHI grant numbers 19K08187.