In vitro and in vivo anti-tumor effects of brexpiprazole, a newly-developed serotonin-dopamine activity modulator with an improved safety profile

From the perspective of psycho-oncology, antipsychotics are widely used for patients with cancer. Although some antipsychotic drugs have anti-tumor effects, these antipsychotic drugs are not applicable for cancer patients because of their severe side effects. Brexpiprazole, a novel serotonin-dopamine modulator with an improved side effect profile, was developed as a drug that is structurally and pharmacologically related to aripiprazole, which was reported to have anti-cancer effects. However, it remains unknown whether brexpiprazole has anti-cancer effects. In this study, we examined whether brexpiprazole has anti-tumor effects in cancer cells and cancer stem cells (CSCs) of glioblastoma, pancreatic cancer, and lung cancer. Brexpiprazole suppressed cell growth and induced cell death in the cancer cells and the CSCs, and decreased the CSC properties of the CSCs. Brexpiprazole did not exert any cytotoxic effects on non-cancer cells at the anti-cancer effect-inducing concentration. In the cancer cells and the CSCs, brexpiprazole reduced the expression of survivin, an anti-apoptotic protein, whose reduction sensitizes tumor cells to chemotherapeutic reagents. In the preclinical model in which pancreatic CSCs were subcutaneously implanted into nude mice, brexpiprazole suppressed tumor growth, in addition to reducing the expression of Sox2, a marker for CSCs, and survivin. This suggests that brexpiprazole is a promising antipsychotic drug with anti-tumor effects and an improved safety profile.

Cancer is one of the leading causes of death [1]. As cancer patients are forced to endure poor clinical courses, at least 25–30% of patients with cancer have psychological problems, including depression, anxiety, stress-related syndromes, adjustment disorders, sleep disorders, and delirium [2]. Moreover, cancer patients also develop psychological and neurological problems due to chemotherapy against cancer [3]. Therefore, in order to ameliorate these symptoms, psychological drugs are widely given to patients with cancer [2, 4–6]. For example, aripiprazole, a dopamine partial agonist, is used for the management of delirium and emesis in cancer patients [7–9], and olanzapine, a multi-acting receptor-targeting antipsychotic drug, is given as an anti-emetic drug for chemotherapy-induced nausea and vomiting [10–12].

From the point of view of drug repositioning or repurposing, several psychological drugs have been reported to have anti-cancer effects such as the anti-dopaminergic drug thioridazine, and the tricyclic antidepressants (TCAs) imipramine and chlorimipramine [13–16]. Although thioridazine has promising therapeutic potential [13, 17–20], it is no longer available for clinical use because of its severe cardiac side effects such as torsades de points [21–23]. TCAs have largely been replaced by selective serotonin reuptake inhibitors, which have a favorable side effect profile. We previously reported the anti-cancer effects of aripiprazole and olanzapine, which are used for cancer patients with fewer side effects [24, 25]. However, olanzapine sometimes causes intolerable sedation [12] and aripiprazole causes akathisia [26, 27]; therefore, antipsychotic drugs that have anti-cancer effects with an improved side effect profile are required.

Brexpiprazole inhibits growth and is cytotoxic to cancer cells, including CSCs, but not to normal cells 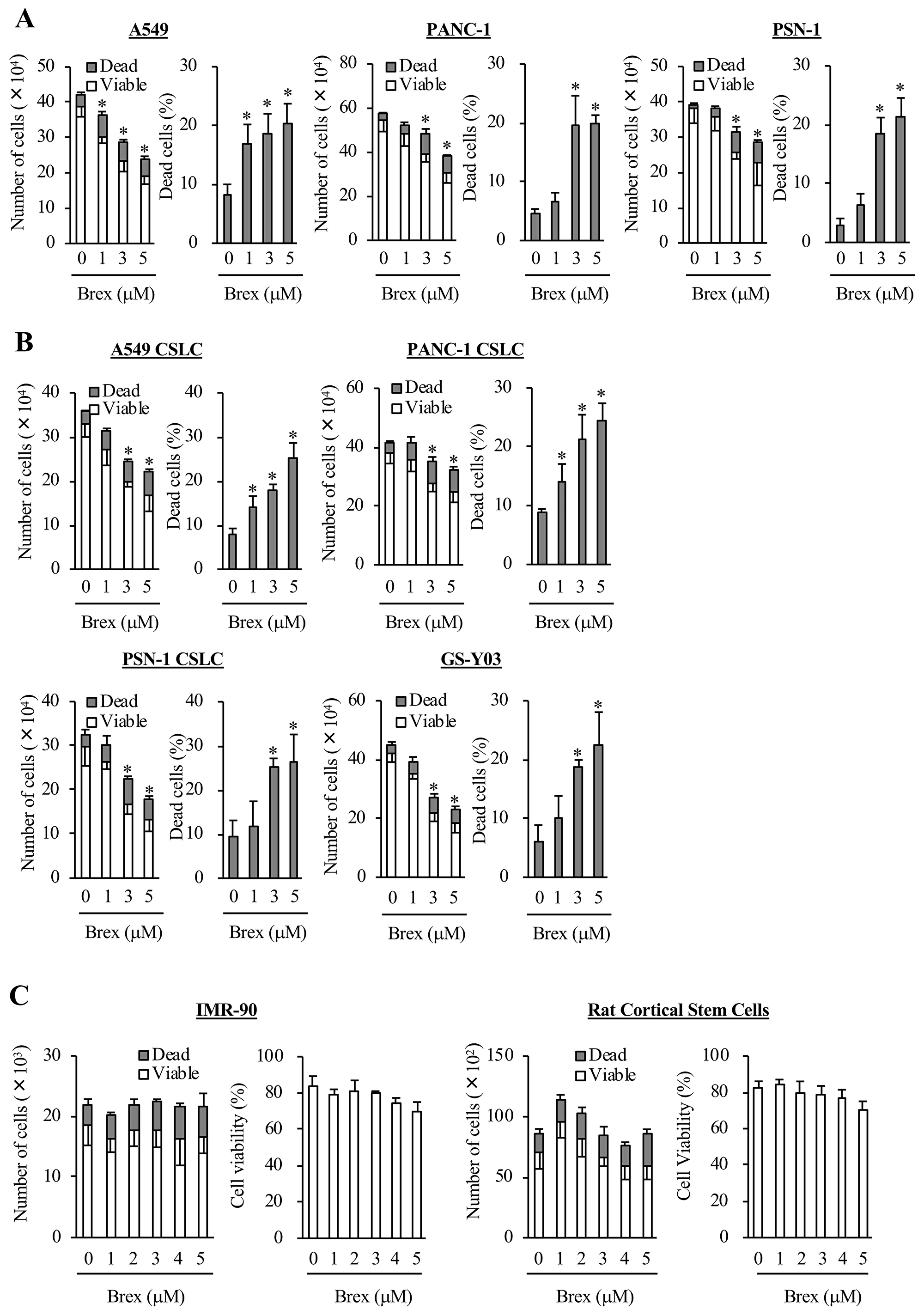 Figure 1: Brexpiprazole suppresses the growth of cancer cells and cancer stem cells, and induces cell death without marked toxicity to normal cells. Cancer cells (A), CSCs (B), and non-cancer cells (C) were treated with brexpiprazole (Brex) at the indicated concentrations for 3 days, and were then subjected to cell viability assays. The numbers of total (viable and dead) (left panels) and percentage of dead cells (right panels) are shown. The number of seeded cells was 1 × 105 cells in (A) and (B), 1 × 104 cells in the left panels of (C), and 5 × 103 cells in the right panels of (C). Values represent the mean ± SD from triplicate samples of a representative experiment repeated three times with similar results. *p < 0.05. 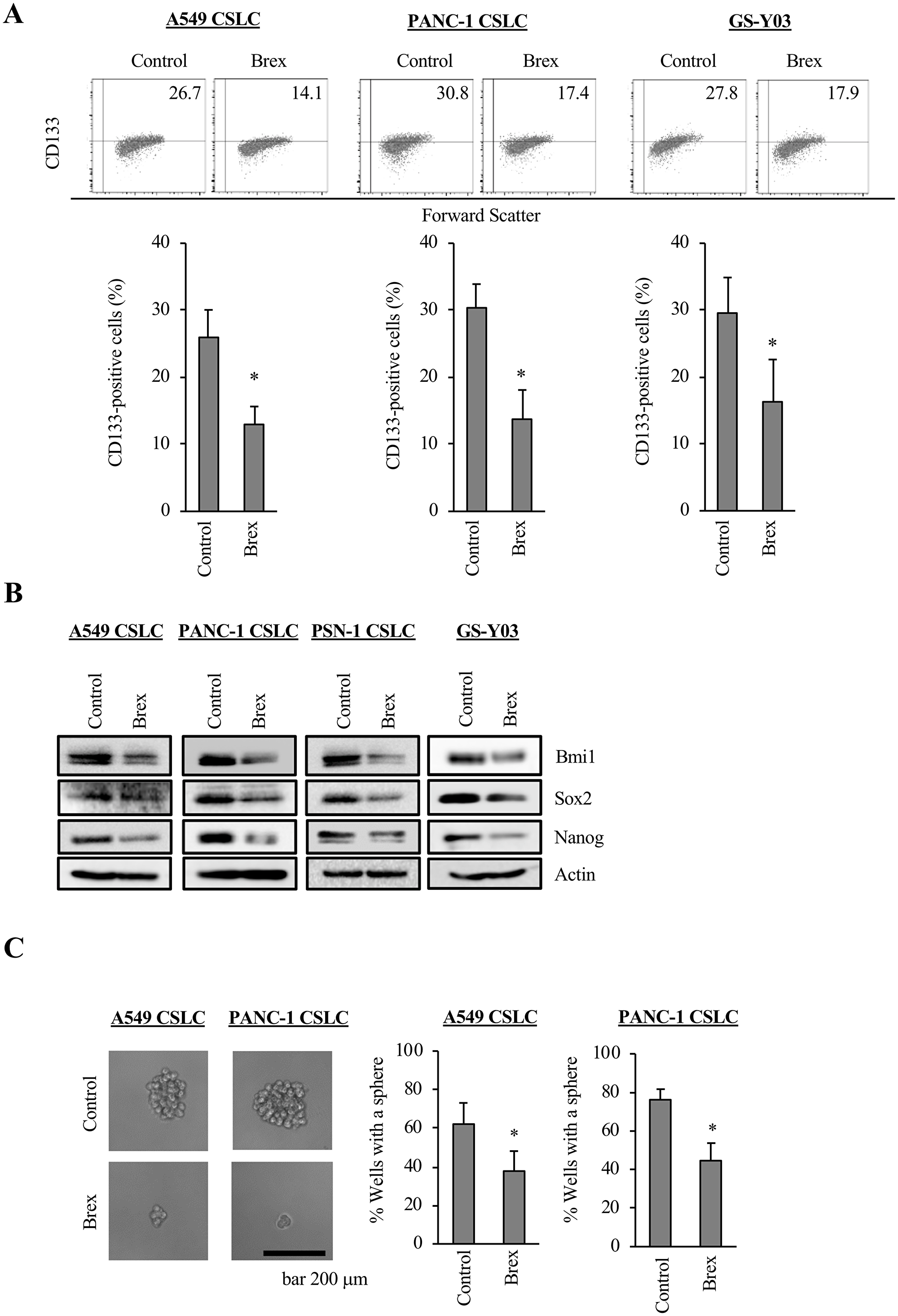 Figure 2: CSCs lose their CSC properties after brexpiprazole treatment. CSCs treated or not treated with 3 μM brexpiprazole (Brex) for 3 days were subjected to flow cytometric analysis for CD133 expression (A), immunoblot of indicated proteins (B), and the sphere formation assay (C). In (A) and (C), the data represent means + SD from 3 independent experiments. *p < 0.05. In (A), representative flow cytometric plots together with the percentage of CD133-positive cells are shown. In (C), the scale bar indicates 200 μm. 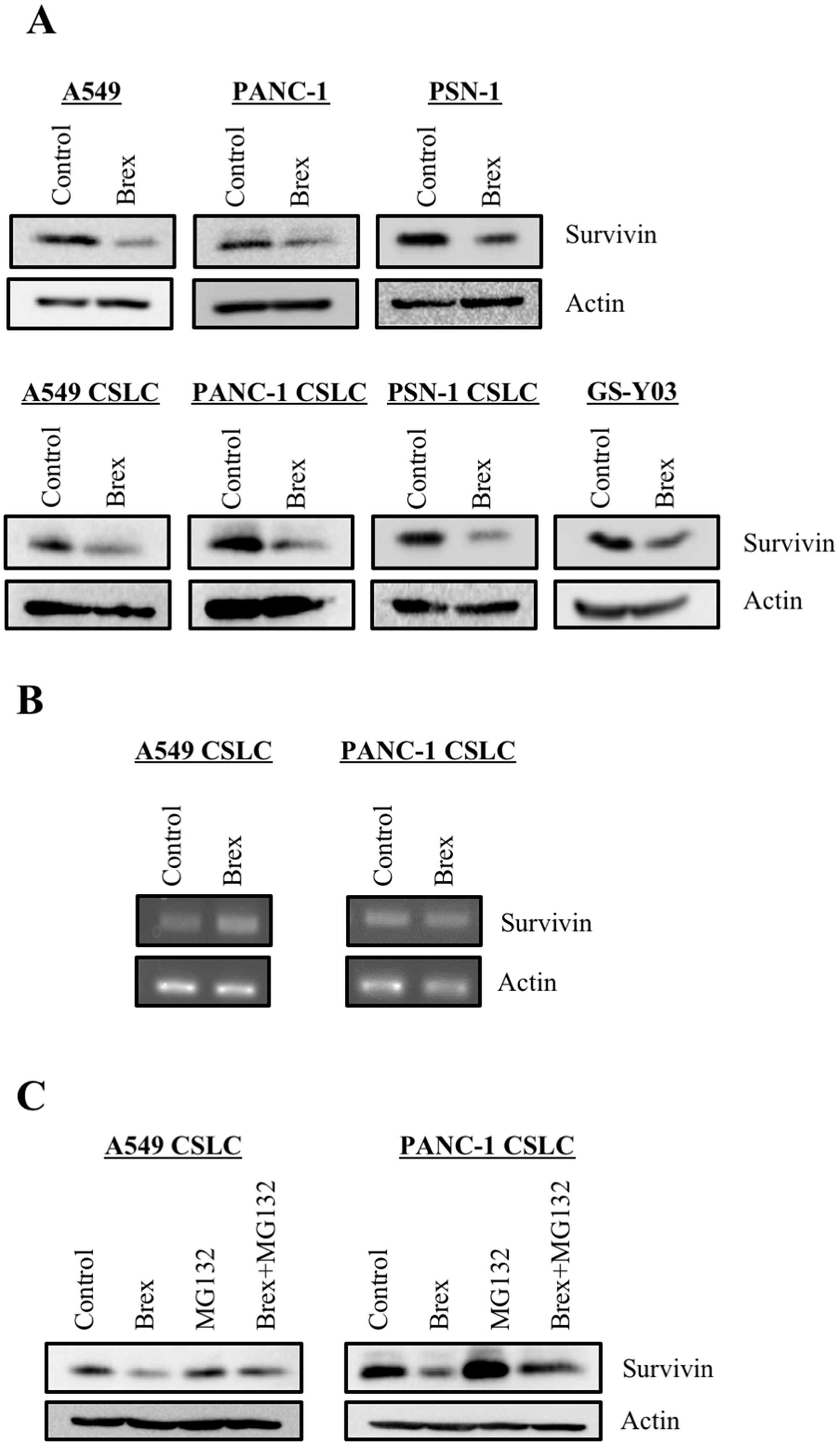 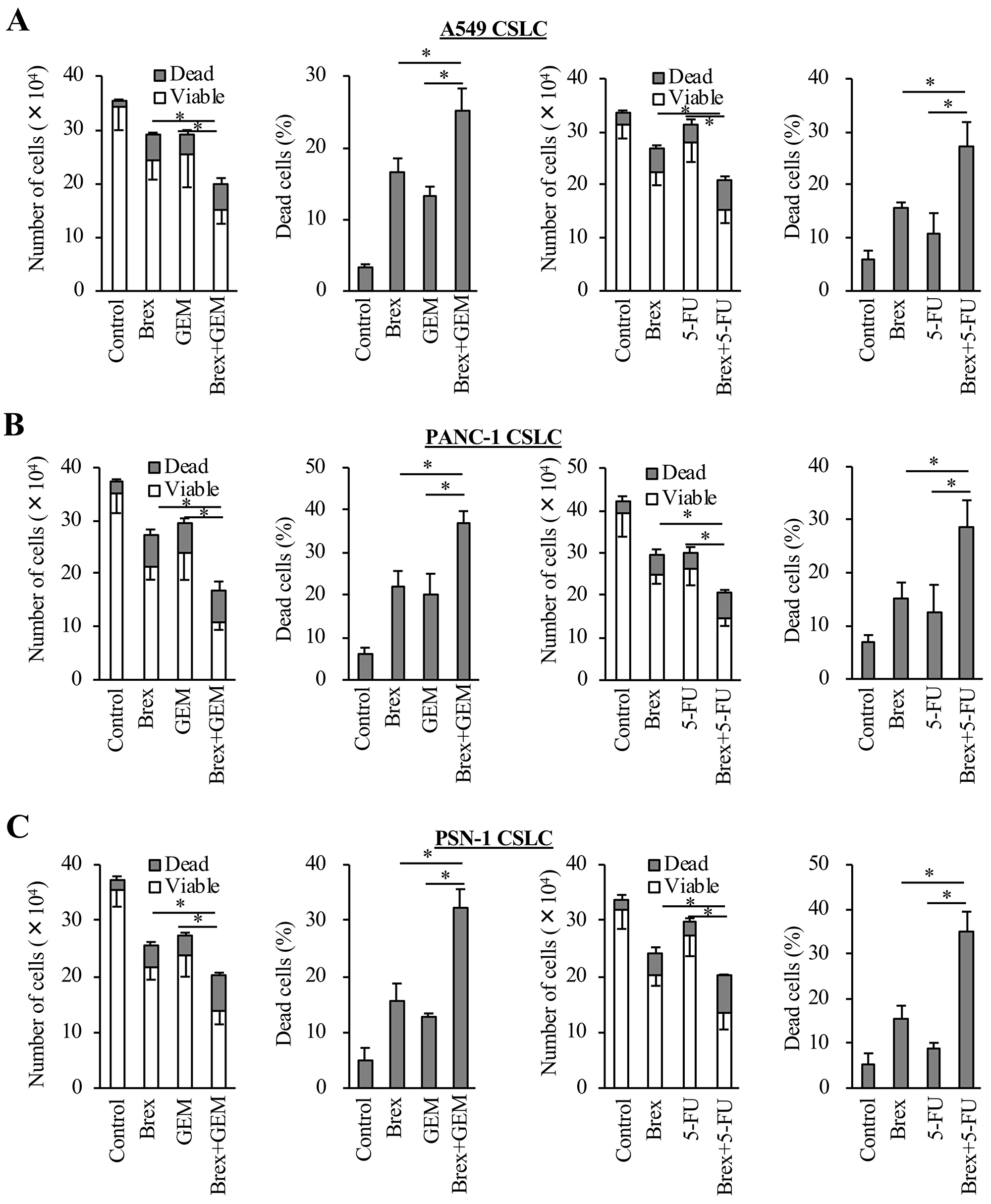 Anti-tumor effects of brexpiprazole in vivo

Lastly, to explore the clinical applicability of brexpiprazole to cancer treatment, we evaluated the anti-tumor effects of brexpiprazole in vivo. Mice in which PANC-1 CSLC cells were subcutaneously transplanted were treated with brexpiprazole. Brexpiprazole significantly suppressed the growth of the tumors (Figure 5A), but did not alter the body weight (Figure 5B). No notable adverse effects were observed. The expression of Sox2, a representative stemness marker, and survivin was reduced by brexpiprazole administration (Figure 5C and 5D). 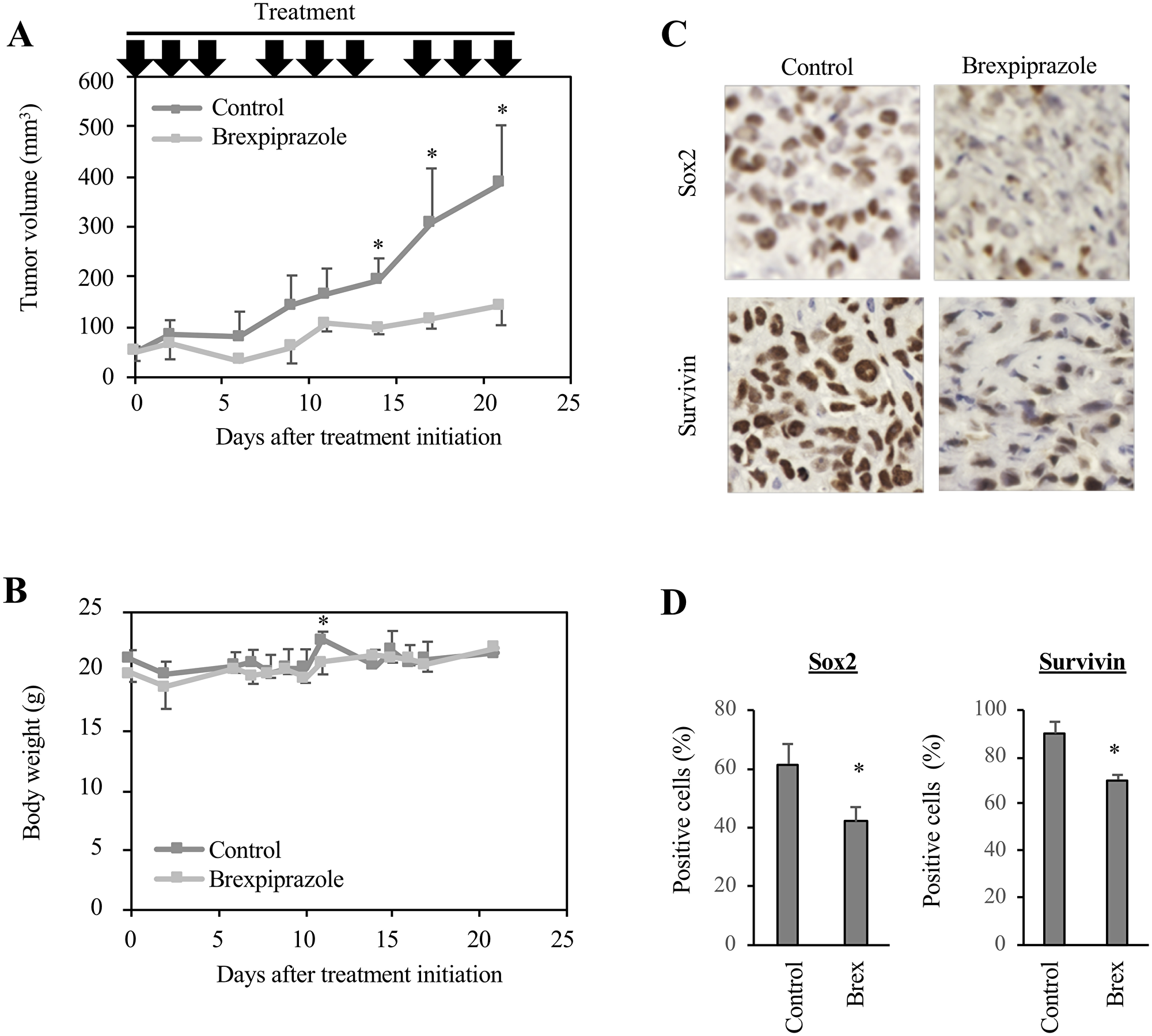 Figure 5: Brexpiprazole suppresses tumor growth in vivo and reduces the expression of Sox2 and survivin. PANC-1 CSLC cells were subcutaneously implanted into mice. After confirming tumor formation, drug administration was initiated 10 days after implantation, and the mice were treated or not treated with brexpiprazole (0.1 mg/kg body weight, intraperitoneal injection, three times a week). The tumor volume (A) and mouse body weight (B) were measured, and the results are shown in the graphs as means ± SD. *p < 0.05. Immunohistochemistry for Sox2 and survivin (C), and quantification of the percentage of Sox2- and survivin-positive cells (D). In (D), three representative images were taken for each tumor nodule, and the percentage of Sox2- or survivin-positive cells was calculated. The graphs show means + SD. *p < 0.05.

Several studies have demonstrated that antipsychotic agents have anti-cancer potential [13–16]. We previously reported that aripiprazole, a serotonin-dopamine activity modulator, has anti-cancer activity [24]. Brexpiprazole is a newly-developed serotonin-dopamine activity modulator that is structurally and pharmacologically related to aripiprazole with a better side effect profile because of its lower intrinsic activity at dopaminergic receptors [26, 27, 29]. However, it remains unknown whether brexpiprazole has anti-cancer activity. This study revealed that brexpiprazole has anti-tumor effects by reducing the properties of CSCs and expression of survivin, an anti-apoptotic protein.

In the previous study, the anti-cancer effects of aripiprazole were explored only in vitro [24]; therefore, the anti-tumor effects of serotonin-dopamine activity modulators on CSCs in preclinical mouse models were unknown. In this study, brexpiprazole significantly suppressed the growth of the subcutaneously implanted pancreatic CSCs. Furthermore, it reduced the expression of Sox2, a marker of CSCs, and survivin, an anti-apoptotic protein. This suggests that brexpiprazole can suppress the CSC properties of the tumors in vivo. Suppression of survivin sensitizes tumor cells to chemotherapeutic reagents [25, 30, 31], and in this study, brexpiprazole sensitized the CSCs to chemotherapeutic reagents in vitro. Therefore, brexpiprazole is expected to act as a chemosensitizer. These data from the preclinical mouse model can facilitate the clinical application of brexpiprazole to patients with cancer.

Brexpiprazole shares its spectrum of targeted receptors with aripiprazole, but its affinity and effects on these receptors differ from those of aripiprazole, leading to the different profile of adverse and therapeutic effects [27, 32]. In this study, brexpiprazole at the concentration effective for cancer cells and CSCs did not suppress cell growth or induce cell death in normal human lung fibroblasts or rat cortical stem cells. Moreover, brexpiprazole at the dosage that significantly suppressed the growth of subcutaneously implanted CSCs did not alter the body weight or cause other notable side effects. Taking into account dose conversion from mice to humans [33], the dose we used in the experiment (0.1 mg/kg) corresponds to 0.00813 mg/kg as a human equivalent dosage. Although the dosage was lower than that clinically used for humans (0.0167 – 0.0667 mg/kg), brexpiprazole was effective in mice. Of note, brexpiprazole was reported to cause fewer adverse effects than aripiprazole; akathisia and insomnia occur 50% less frequently than with aripiprazole [27, 32, 33]. Thus, due to its improved safety profile, brexpiprazole is a promising candidate antipsychotic drug with anti-tumor effects.

Recently, monoamines, such as serotonin and dopamine, are attracting attention as targets for cancer therapy [42–45]. Alteration of monoamine activity in cancer cells is suspected to be involved in the mechanism of the anti-tumor activity of olanzapine, aripiprazole, and brexpiprazole ([24, 25] and this study) because all three drugs target monoamine receptors. However, their anti-cancer effects were not rescued or mimicked by treatment with monoamines or antagonists of monoamine receptors, respectively (data not shown). To elucidate the mechanism, further studies are needed.

In this study, we revealed that brexpiprazole can inhibit cancer cell growth in vitro and in vivo, induce cytotoxic cell death in cancer cells, and reduce CSC properties and the expression of survivin, which is a known chemoresistant factor. In conclusion, brexpiprazole is a promising anti-tumor drug with an improved side effect profile, as compared with previously reported antipsychotic drugs, and is a potential candidate drug for patients with cancer.

After dissociating into single cells, CSCs were serially diluted in the stem cell culture medium and seeded on non-coated 96-well plates to be a single cell in each well. Wells containing a single cell were marked on the next day, and 1 week after seeding, the percentage of marked wells with a sphere relative to the total number of marked wells was calculated [24, 25, 48].

Flow cytometry was conducted as previously described [48]. Briefly, dissociated cells were washed with ice-cold PBS, fixed with 4% (w/v) paraformaldehyde for 10 min at room temperature (RT), and washed again with ice-cold PBS. The cells were blocked in FCM buffer (0.5% [w/v] bovine serum albumin, 0.1% [w/v] NaN3 in PBS) for 1 hour, followed by three PBS rinses and further incubation with anti-CD133 antibody in the FCM buffer overnight at 4°C, and then with the Alexa Fluor® 488 goat anti-mouse IgG (Thermo Fisher Scientific) for another 1 hour at RT. Single cells were gated using forward scatter in the isotype control samples. The isotype control samples were used to establish a gate in the fluorescein isothiocyanate channel. Cells exhibiting signals for CD133 above the gate established by the isotype control were considered CD133-positive cells. Flow cytometry experiments were performed using the FACSCantoTM II Flow Cytometer (BD Biosciences, Franklin Lakes, NJ, USA). Data were analyzed by FlowJo® software, version 7.6.5 (Treestar Inc., Ashland, OR, USA).

Mouse xenograft studies were carried out as previously described [56, 57]. For subcutaneous implantation, PANC-1 CSLC cells (1 × 105 implanted cells) suspended in 200 μL of PBS were implanted subcutaneously into the bilateral flank regions of 5- to 8-week-old male BALB/cAJcl-nu/nu mice (CLEA Japan, Inc., Tokyo, Japan) after being anesthetized by intraperitoneal injection of medetomidine, midazolam, and butorphanol (0.3 mg, 4 mg, and 5 mg per kg body weight, respectively). After implantation, the general health status and the presence of subcutaneous tumors were monitored. The tumor volume was calculated by measuring tumor diameters (measurement of 2 perpendicular axes of tumors) using a caliper and calculated as 1/2 × (larger diameter) × (smaller diameter)2. For systemic administration of brexpiprazole, a stock solution of brexpiprazole (4 mg/mL in DMSO) was diluted in DMSO to prepare 100 μL solutions for each injection. The brexpiprazole was administered intraperitoneally to mice at 0.1 mg/kg body weight three times a week. Drug treatment was initiated after confirmation of subcutaneous tumor formation, and tumor-bearing mice were randomized into two groups before the initiation of drug treatment. All animal experiments were performed following a protocol approved by the Animal Research Committee of Yamagata University.

The results are expressed as the means and standard deviation (SD). The differences were compared using the two-tailed Student’s t- test. P-values < 0.05 were considered significant and indicated with asterisks.

This work was supported by Grants-in-Aid for Scientific Research, for Challenging Exploratory Research, and for Young Scientists from the Ministry of Education, Culture, Sports, Science and Technology of Japan.