MicroRNAs (miRNAs) belong to a recently discovered class of small, non-coding RNA molecules that regulate the expression of multiple target genes and multiple cellular processes including cell differentiation, stem cell maintenance, and epithelial–mesenchymal transition.[1, 2] The abnormal expression of miRNAs is a common feature of cancers and can be caused by different mechanisms such as ampliﬁcation/deletion, chromosomal rearrangements, and epigenetic regulation.[3, 4] Depending on the genes targeted, miRNAs can act as either oncogenes or tumor suppressors.[5-8] MiRNAs show characteristic expression signatures in various cancers and can profoundly affect cancer cell behavior[9, 10]. Low grade gliomas inherently tend to locally recur and spontaneously progress to anaplastic gliomas and eventually secondary glioblastomas.[11] However, to date, the miRNA expression patterns in the malignant progression of gliomas have not been investigated systematically. 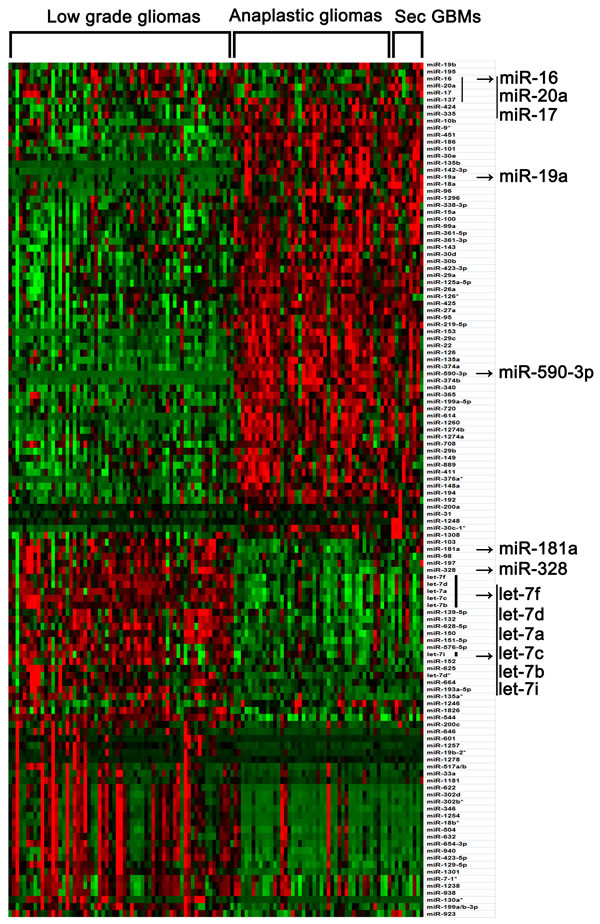 Following data filtering, described in the “Materials and Methods”, the remaining 629 miRNAs were analyzed by BRB array tools using the permutation test method. We identified five miRNAs (miR-767-5p, miR-105, miR-584, miR-296-5p and miR-196a) that are significantly associated with overall survival (Permutation P < 0.01; Figure 2). The significant miRNAs that formed the signature were of two types - risky and protective. Risky miRNAs were defined as those that had hazard ratio for death greater than 1. Protective miRNAs were defined as those that had hazard ratio for death less than 1. Using this definition, we found 2 protective miRNAs and 3 risky miRNAs. Of note, 2 protective miRNAs: miR-105 and miR-767-5p are located in the same miRNA cluster. We then used the five miRNAs identified to construct a signature by the risk-score method.[15] As shown in Figure 3A-J, the five-miRNA signature risk score was calculated for each of the 44 patients in the Microarray cohort and then was used to divide them into a high-risk group and a low-risk group in all anaplastic gliomas, astrocytomas, oligodendrocytomas and oligoastrocytomas. Furthermore, the prognostic value of the five-miRNA signature was validated using real-time qRT-PCR in an independent cohort consisting of 134 samples (Figure 3K-T). 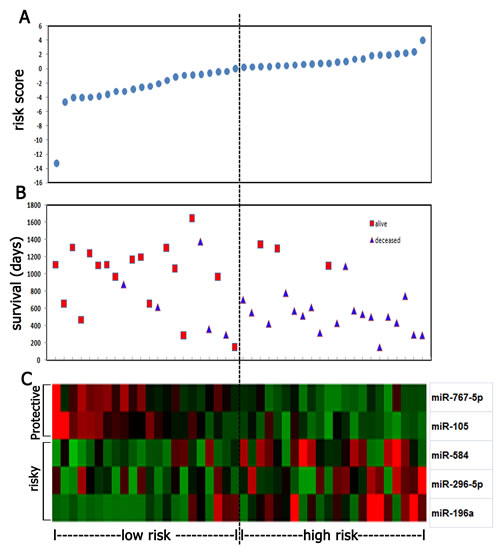 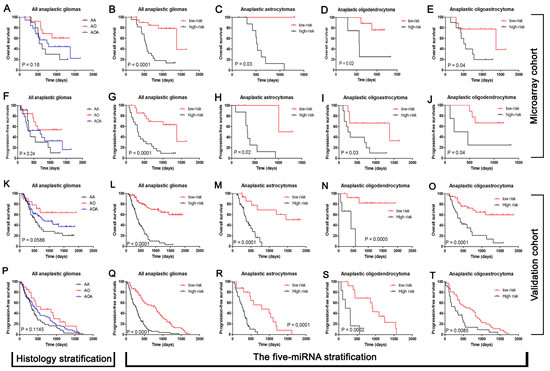 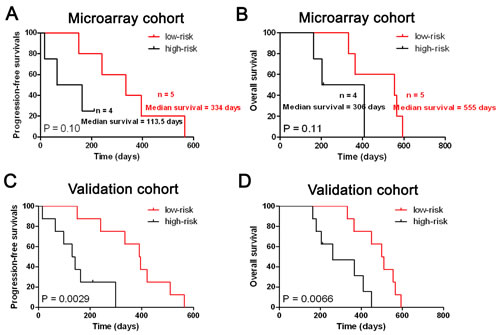 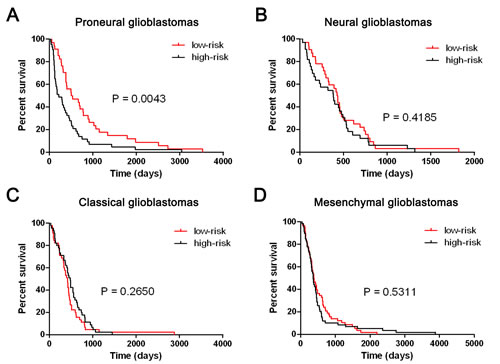 Anaplastic gliomas are classified by the WHO as grade 3 malignant tumors and include anaplastic astrocytomas, anaplastic oligodendrogliomas and anaplastic oligoastrocytomas.[18] It has previously been shown that miRNA expression patterns could be used as prognostic indicators in various cancers.[19, 20] Recently, Srinivasan et al. reported that a ten-miRNA expression signature predicts survival in glioblastoma.[15] However, to date, no prognostic markers based on miRNA profiling have been identified in anaplastic gliomas. In the present study, we developed a five-miRNA signature (two protective miRNAs-miR-767-5p, miR-105; three risky miRNAs: miR-584, miR-296-5p and miR-196a) that could identify patients with a high risk of unfavorable outcome in anaplastic gliomas regardless of histology type. Of them, only miR-196a was previously reported to be negatively correlated with overall survival in glioblastomas.[21] It should be highlighted that two protective miRNAs (miR-767-5p and miR-105) localized in the same miRNA cluster. Our observations showed a novel prognostic classifier, the five-miRNA signature, in anaplastic gliomas and revealed an important role for the miR-105-767 cluster in the pathogenesis and tumor biology of anaplastic gliomas for the first time. In addition, we applied the five-miRNA signature in secondary and TCGA glioblastomas. We found that the five-miRNA signature can also identify patients who had a high risk of unfavorable outcome in secondary and TCGA Proneural glioblastomas, but not Neural, Classical and Mesenchymal glioblastomas. The molecular and clinical characteristics of Proneural samples in primary glioblastomas resemble secondary glioblastoma and may progress from lower grade gliomas thought without clinical or histological evidence of a less malignant precursor lesion. Thus, we postulated that Proneural glioblastomas might have similar miRNA expression pattern with anaplastic gliomas and secondary glioblastomas and undergo potential malignant progression from low grade gliomas without a previous operation.

All glioma samples included in our study were from the Chinese Glioma Genome Atlas (CGGA). The patients underwent surgical resection between January 2006 and December 2009. Patients were eligible for the study if the diagnosis of glioma was established histologically according to the 2007 WHO classification. Tumor tissue samples were obtained by surgical resection before treatment with radiation and chemotherapy. This study was approved by the institutional review boards of the hospitals, and written informed consent was obtained from all patients.

RNA extraction, Whole genome miRNA profiling and Real-time qRT-PCR were performed as Ref.[12] Briefly, total RNA from frozen tumor tissues was extracted using the mirVana miRNA Isolation kit (Ambion, Austin, TX, USA) according to the manufacturer’s protocol. Then, 200 ng of total RNA was polyadenylated and then converted into cDNA using a biotin-labeled Oligo dT primer with a universal PCR sequence. After cDNA synthesis, miRNA were individually interrogated using specific oligonucleotides. A single miRNA-specific Oligo (MSO) was designed against each mature miRNA sequence, and miRNA-specific primers were extended using DNA polymerase. Universal primers were used to amplify the cDNA templates, and the primer complimentary to the array was fluorescently labeled. Finally, the labeled, single-stranded PCR products were hybridized to the Human v2.0 miRNA Expression BeadChip (Illumina, Inc., San Diego, CA, USA) containing 1,146 human miRNAs (97% coverage of the miRBase 12.0 database). Real-time qRT-PCR was performed using a standard TaqMan PCR kit procedure on a LightCycler 480 real-time PCR system (Roche). All of the primers and probes for the TaqMan microRNA assays were purchased from Applied Biosystems. Real-time RT-PCR was carried out according to the manufacturer’s recommendation, and the relative expression was calculated using the comparative Ct method.

Median absolute deviation (MAD) was calculated using MATLAB software. After filtering the probes showing the lowest variable expression (MAD < 0.05), the remaining 629 miRNAs were used for the following analysis. We applied significance analysis of microarrays (SAM) to identify differential expressed miRNAs in low grade, anaplastic gliomas and secondary glioblastomas in a pairwise manner. Student’s t-test was used to determine significant differences. Cox proportional hazard regression analyses were performed using the BRB array tools in the Microarray cohort. Using the permutation test method, with 10000 permutations, we found 5 miRNAs were strongly correlated with survival (p < 0.01). The significant miRNAs were divided into risky and protective types. Risky miRNAs were defined as miRNAs with a hazard ratio for death greater than 1. In contrast, protective miRNAs were defined based on a hazard ratio for death less than 1. Using these 5 significant miRNAs, a risk-score formula for survival prediction was constructed according to a linear combination of the expression level of the miRNA, weighted by the regression coefficient from the univariate Cox regression analyses.[13-15] According to this model, patients having high risk scores are expected to have poor survival outcomes as compared to patients having low risk scores. The risk scores are calculated as follows: Risk score = (-5.04 x expression of hsa-miR-767-5p) + (6.5 x expression of hsa-miR-296-5p) + (0.76 x expression of hsa-miR-584) + (-3.14 x expression of hsa-miR-105) + (0.9 x expression of hsa-miR-196a). We used the 50th percentile risk score as the cut-off, since this divided the Microarray samples into two groups having different survival times with highest significance. Kaplan-Meier survival analysis was used to estimate the survival distributions, and the log-rank test was used to assess the statistical significance between stratified survival groups using GraphPad Prism 5.0 statistical software. Prediction analysis of microarrays was used to subtype annotation. All data are presented as the means ± SE. A two-sided P value of < 0.05 was regarded as significant.