Liver cancer is the second leading cause of cancer mortality worldwide. Safer and more effective diagnostic methods for liver cancer are desirable, and biomarkers represent a potentially alternative method for diagnosis. The present study was designed to identify liver cancer biomarkers. We quantified the changes in serum protein levels between liver transplantation and healthy (control) females using isobaric tags for relative and absolute quantitation (iTRAQ) as well as proteomic analysis. A total of 1399 proteins were identified; of these, three proteins showed significantly different concentrations between the before transplantation group and the control group. These proteins may thus be relevant to liver cancer and constitute potential liver cancer biomarkers.

Liver cancer is the second leading cause of cancer mortality worldwide, causing more than 700,000 deaths annually [1]. Liver transplantation (LT) is the best curative treatment modality, achieving up to 91% 1-year survival post-transplantation [2]. However, finding the right donor liver is rare, and the patient must live as long as possible to wait for the liver from an appropriate donor. Therefore, the sooner the disease is diagnosed, the better. A safer and more effective diagnostic method is desirable. Biomarkers represent a potentially alternative method for diagnosis.

Proteomic technologies have enabled the identification of novel protein biomarkers [3]. Isobaric tags for relative and absolute quantification (iTRAQ) is a technique developed by the Applied Biosystems Incorporation [4]. In the present study, iTRAQ was used to analyse the total protein content of serum from patients with LT. iTRAQ was combined with Gene Ontology (GO) and pathway analysis to identify proteins that are differentially expressed in LT and determine their predicted functions.

In this iTRAQ quantification project, there were 5 homogeneous samples named A, B, C, D, E, and we performed 1 technical duplicate experiment. In total, 401198 spectrums were generated, and 6173 peptides and 1399 proteins were identified with the following cutoff: Mascot Percolator [5] Q-value ≤ 0.01 (more details on the method page of the MS/MS Ion Search).

Table 1: The upregulated proteins in serum samples of liver transplantation (Part of the data)

COG annotation for all identified proteins

All of the identified proteins were classified into different COG functional categories and subsequently into 23 subcategories (Figure 1). Most of these proteins were involved in “post-translational modification, protein turnover, chaperones” and in “general function prediction only”. 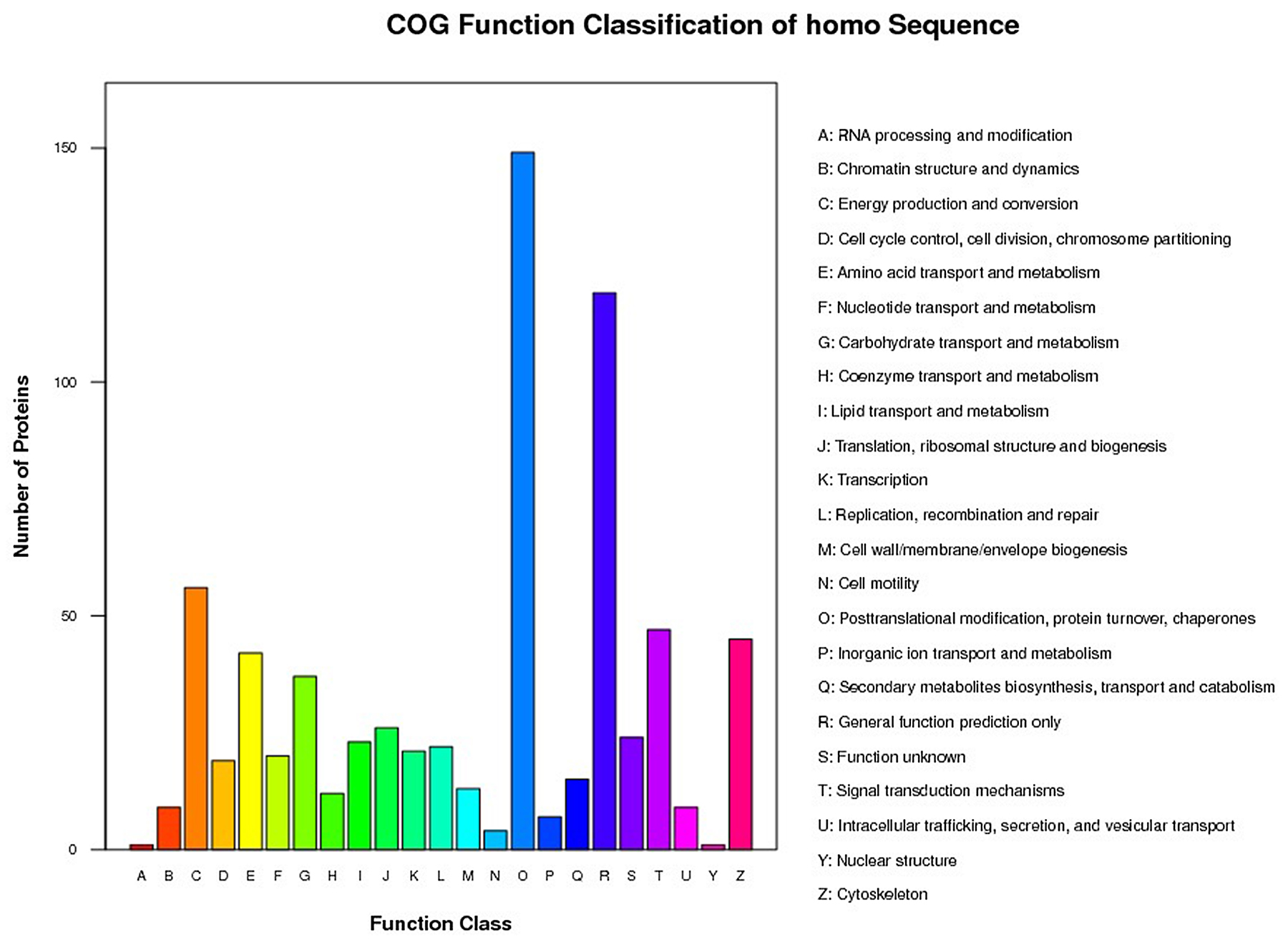 Data from Figure 1 can be compared with the data in Figure 2, which shows that the P-value of retinol metabolism is the lowest in the B-VS-A pathway. The rich factor is the ratio of differentially expressed protein number annotated in this pathway to all proteins annotated in this pathway. A greater rich factor value corresponds to a greater intensiveness. The P-value ranges from 0~1, and a lower P-value indicates greater intensiveness (Figure 2). The KEGG pathway of retinol metabolism is shown in Figure 3. Perisinusoidal stellate cells of the liver play important roles in retinol metabolism and fibrosis [6]. 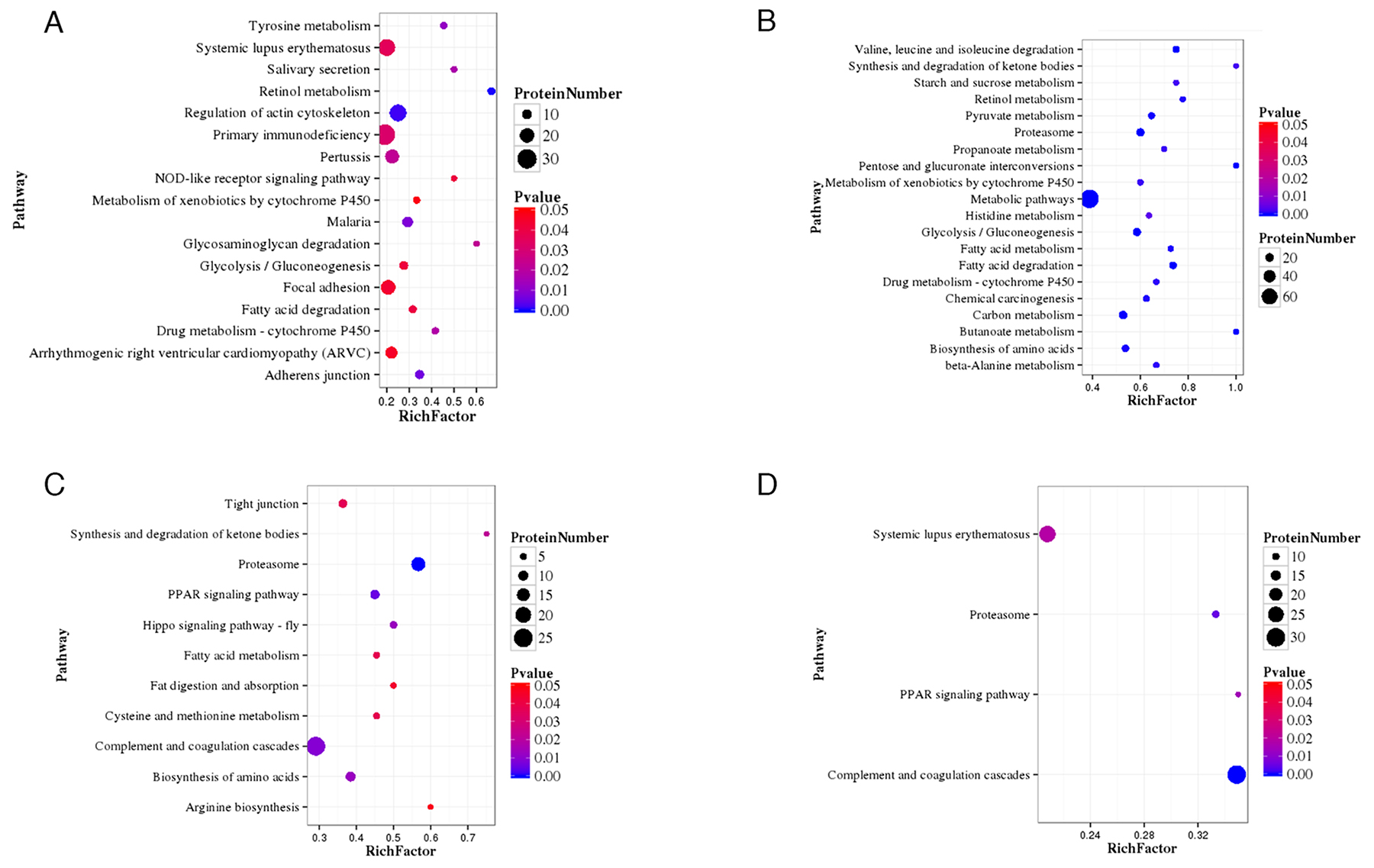 Figure 2: (A):class B vs class A; (B):class C vs class A; (C):class D vs class A; (D):class E vs class A Statistics of pathway enrichment of differentially expressed proteins in each pairwise. RichFactor is the ratio of differentially expressed protein number annotated in this pathway term to all protein number annotated in this pathway term. Greater richFator means greater intensiveness. Pvalue ranges from 0~1, and less Pvalue means greater intensiveness. 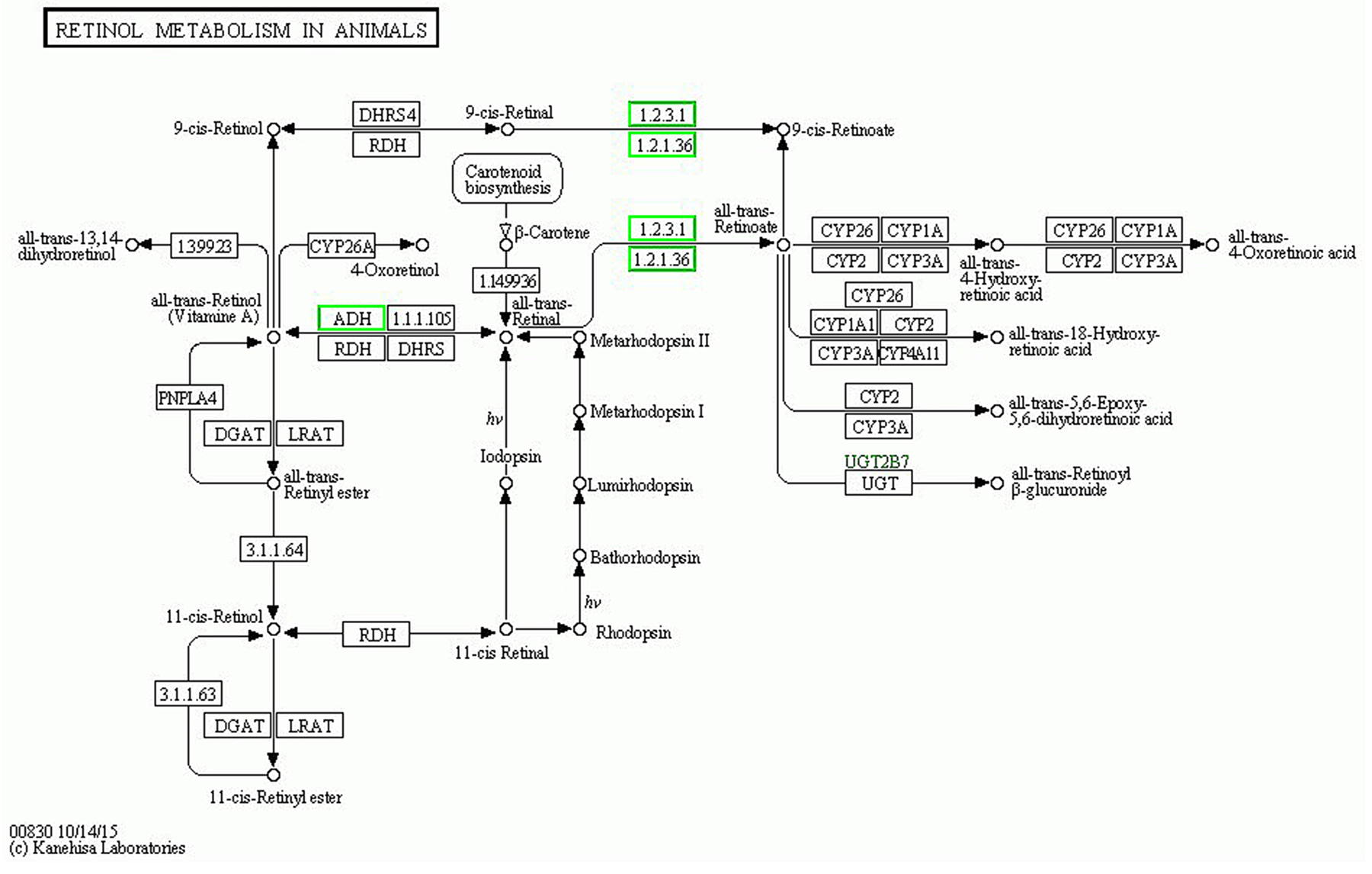 Quantification of the proteins via iTRAQ analysis has been suggested to be a suitable strategy for the identification of biomarkers since iTRAQ allows the comparison of protein abundance among samples by measuring the peak intensities of reporter ions released from the iTRAQ-tagged peptides. In this study, iTRAQ was combined with Gene Ontology (GO) and pathway analysis to identify the proteins that are differentially expressed in LT and determine their predicted functions.

Among the differentially expressed proteins in Table 1 and based on published studies, protein S100-P was found to be relevant to liver cancer. However, in the other groups, C-VS-A_up, D-VS-A_up and E-VS-A_up, S100-P was not significantly upregulated.

S100 calcium-binding protein P (S100P) is a protein that is encoded by the S100P gene in humans [7]. The protein encoded by this gene is a member of the S100 family of proteins containing 2 EF-hand calcium-binding motifs. S100 proteins are localized in the cytoplasm and/or nucleus of a wide range of cells and are involved in the regulation of a number of cellular processes, such as cell cycle progression and differentiation. S100 genes include at least 13 members that are located as a cluster on chromosome 1q21; however, this gene is located at 4p16. This protein, in addition to binding Ca2+, also binds Zn2+ and Mg2+. This protein may play a role in the aetiology of prostate cancer [8]. S100P regulates the calcium signal transduction pathway to mediate cytoskeletal interactions and is induced by the prostaglandin E2 (PGE2)/EP4) receptor signalling pathway in colon cancer cells [9]. The ectopic expression of S100P in SW 480 CRC promotes invasion and metastasis and decreases sensitivity to 5-FU in vitro [10]. The results of Hui Dong et al. indicated that S100P was upregulated in HCC, suggesting a possible role for S100P in liver cancer. The increased expression of both CCL20 and S100P genes was detected in HCC by quantitative RT-PCR, although they were found to be significantly upregulated in HepG2 but not in HCC SAGE data [11].

Aldehyde oxidase (AO) is a metabolizing enzyme and plays a very important role in the metabolization of numerous drugs. AO catalyses the oxidation of aldehydes into carboxylic acid and catalyses the hydrolysation of some heterocycles. In addition, AO can catalyse the oxidation of both cytochrome P450 (CYP450) and monoamine oxidase (MAO) intermediate products [12]. However, in the other groups, C-VS-A_up, D-VS-A_up and E-VS-A_up, S100-P was not significantly upregulated.

In conclusion, iTRAQ technology, which represents a relatively new strategy for proteomic analysis, was used here to study the changes in protein expression associated with liver cancer. This approach identified 2 significantly differentially expressed proteins (S100P and aldehyde oxidase) that were previously reported to be related to liver cancer. The MFs, CCs and BPs associated with these proteins indicate that they may be suitable liver biomarkers, which may improve the timeliness and accuracy of diagnosis. However, further investigation of the functions of these proteins, as well as of the proteins with high fold changes in liver cancer identified herein, is needed.

Samples. Serum samples were obtained from liver transplant patients between October 2014 and August 2015 at the Guilin 181st Hospital (Guilin No. 181 Hospital officially changed its name to Guilin No. 924 Hospital), Guangxi, China. All patients were transplanted for HCC.

Table 3: Main clinical and biochemical characteristics of patients with liver transplant and the control group

This study was performed according to the guidelines set forth by the Guilin 181st Hospital and abides by the Declaration of Helsinki on ethical principles for medical research involving human subjects. Written informed consent was obtained from all the subjects or their guardians.

Serum (5 ml) was collected from the enrolled subjects in a coagulation tube; the serum was separated, and 100 μl aliquots were stored at -80°C until further use.

After trypsin digestion, the peptides were vacuum centrifuged to dryness. The iTRAQ labelling of peptide samples was performed using the iTRAQ Reagent 8-plex Kit according to the manufacturer’s protocol. The peptides labelled with respective isobaric tags were incubated for 2 h. The iTRAQ-labelled peptides were fractionated using RP.

For RP chromatography using the Shimadzu LC-20AB HPLC Pump System, the peptides from digestion were reconstituted with buffer A (5% acetonitrile, 95% H2O, adjusted to pH 9.8 with ammonia) to 2 ml and loaded onto a 4.6×250 mm Gemini C18 column containing 5 μm particles (Phenomenex). The peptides were eluted at a flow rate of 1 mL/min with a gradient of 5% buffer B (5% H2O, 95% acetonitrile, adjusted to pH 9.8 with ammonia) for 10 min, 5-35% buffer B for 40 min, and 35-95% buffer B for 1 min. The system was then maintained in 95% buffer B for 3 min and decreased to 5% within 1 min before equilibrating with 5% buffer B for 10 min. Elution was monitored by measuring absorbance at 214 nm, and fractions were collected every 1 min. The eluted peptides were pooled as 20 fractions and vacuum-dried.

LC-ESI-MS/MS analysis based on Triple TOF 5600