Mutations in the TP53 tumor suppressor gene remain a hallmark of human cancer. In addition to mutation of TP53, single nucleotide polymorphisms (SNPs) in this gene can have a profound impact on p53 function, and can affect cancer risk as well as other p53 functions. Wild type (WT) p53 contains a proline at amino acid 47, but approximately 1% of African-Americans express a p53 allele with a serine at amino acid 47 (Pro47Ser, hereafter S47). In a mouse model for this variant, mice expressing S47 are predisposed to spontaneous cancers. The S47 variant also is associated with increased pre-menopausal breast cancer risk in African American women. We recently reported that S47 tumor cells are resistant to the majority of cytotoxic chemotherapeutic agents, but show increased sensitivity to a subset of anti-cancer agents, compared to tumors with WT p53. In this work, we report on another potentially promising therapeutic vulnerability of S47 tumors. We find that S47 tumors show decreased mitochondrial metabolism, along with increased dependency on glycolysis. S47 tumor cells also show increased sensitivity to the glycolytic poison 2-deoxy-glucose. We propose that the altered metabolism in S47 tumor cells may be yet another potentially-actionable therapeutic vulnerability to exploit in cancer-prone individuals with this genotype.

The TP53 tumor suppressor plays a critical role in suppressing tumorigenesis by directly regulating the expression of genes that promote apoptosis, cell cycle arrest, and senescence. In addition, p53 plays roles in ferroptosis, metabolism and autophagy, and these pathways likely contribute to the tumor suppressor functions of p53 as well [1–3]. Approximately half of all human tumors contain mutations in TP53. In addition to mutations, there are single nucleotide polymorphisms (SNPs) in TP53 that dampen p53 function, and that can increase cancer risk and decrease the efficacy of cancer therapy [4]. A nonsynonymous single-nucleotide polymorphism at codon 47 in TP53 exists in African-descent populations, and this SNP confers increased cancer risk in mice and humans [5, 6]. Approximately 6% of Africans and 1% of African-Americans express a p53 allele with a serine residue at codon 47 (Pro47Ser, rs1800371). We created a mouse model for this variant, hereafter S47, and showed that mice expressing this variant in either heterozygous or homozygous form show increased risk for hepatocellular carcinoma and other cancers [5]. We showed that the S47 variant is an intrinsically poorer tumor suppressor compared to WT p53 [7, 8]. Moreover, we identified two therapeutic agents, cisplatin and BET inhibitors, which are preferentially cytotoxic to tumor cell lines containing the S47 variant [7].

Here-in we report that S47 transformed cells also show increased glycolytic rates and decreased mitochondrial respiration, compared to tumor cells with WT p53. Our data support the premise that the increased glycolytic flux in S47 cells may provide an additional target for cancer therapy in these individuals. In support of this premise we show that S47 tumor cells are preferentially sensitive to 2-deoxy-glucose, compared to their wild type p53 counterparts. These data strengthen the argument for personalized approaches tailored to TP53 genotype.

In order to determine the mechanisms whereby the S47 variant of p53 is a poorer tumor suppressor, we previously conducted analyses of p53 target genes in cells containing WT p53 and S47 [5]. We noted that several of the p53 target genes with impaired transactivation in S47 cells are involved in metabolism. This includes SCO2 and GLS2, which are known p53 target genes involved in mitochondrial metabolism; we previously showed impaired transactivation of these genes in non-transformed S47 cells [5, 8]. Our findings suggested that tumor cells containing WT p53 and the S47 variant might differ in mitochondrial metabolism. To address this issue we assessed oxygen consumption rate and mitochondrial fitness using a Seahorse Bio-Analyzer. For this analysis we used E1A/RAS transformed mouse embryo fibroblast lines from the WT and S47 mouse; all analyses were performed on two independent clones of each genotype that were described previously [7, 9]. This analysis revealed consistent decreases in oxygen consumption rate in S47 transformed cell lines; it also revealed decreased fitness of S47 mitochondria, as assessed by the blunted response to the uncoupling reagent FCCP in S47 tumor cells (Figure 1A, dotted line B). This decrease in oxygen consumption in S47 tumor cells was accompanied by increased extra-cellular acidification rate (ECAR, Figure 1B), which is indicative of increased lactate production and increased aerobic glycolysis. To test the hypothesis that S47 tumor cells show increased aerobic glycolysis, or Warburg metabolism, we performed the glycolytic rate assay using the Seahorse. This analysis confirmed increased glycolysis, at both the basal and metabolically stressed states, in S47 tumor cells compared to WT p53 (Figure 1C–1E). 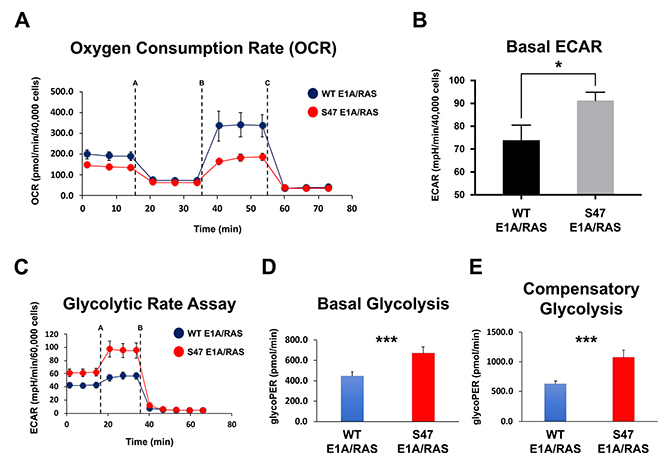 We next sought to determine the potential mechanism for increased aerobic glycolysis in S47 tumor cells. Toward this end, we used quantitative RT-PCR to assess the ability of the S47 variant to transactivate the p53 target genes SCO2 and GLS2, which we previously reported are decreased in non-transformed S47 cells compared to WT [5]. We also analyzed transactivation of RRAD, as RRAD is a known p53 target gene whose protein product negatively regulates glycolysis [10, 11]. In transformed WT and S47 E1A/RAS cells, we saw modest differences in the transactivation of GLS2 and SCO2 [9]. However, we saw markedly reduced transactivation of RRAD in S47 transformed cells compared to WT (Figure 2A). We also noted decreased basal levels of RRAD in untreated S47 cells (Figure 2A). 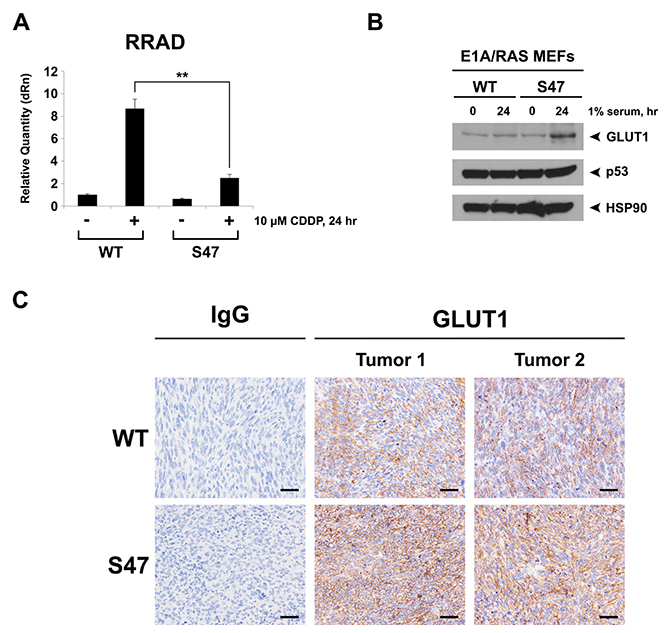 Figure 2: Decreased induction of RRAD and increased expression of GLUT1 in cells and tumors containing the S47 variant. (A) WT and S47 E1A/RAS MEFs were treated with 10 μM Cisplatin (CDDP) for 24 hours. Cellular RNA was isolated and used for quantitative reverse transcription-PCR analysis, and levels of RRAD were normalized to cyclophilin A. Values shown reflect the mean ± standard deviation of technical replicates. Shown are representative data of two independent clones of each genotype. (B) Western blot analysis of GLUT1, p53 and HSP90 (control) in WT and S47 E1A/RAS MEFs subjected to nutrient-deprived conditions (1% serum) for 24 hours. (C) GLUT1 protein staining in formalin fixed paraffin embedded tumors from WT and S47 E1A/RAS cells. Staining using Rabbit IgG was used as a negative control (scale bar, 100 μm). Shown are representative data from 5 independent tumors of each genotype.

The increased glycolysis in S47 tumor cells, compared to those with WT p53, suggested that the former might be more sensitive to glycolysis inhibitors like 2-deoxy-glucose (2-DG). To test this hypothesis, we assessed the IC50 of 2-DG in WT and S47 E1A/RAS tumor cells. We also compared the effects of 2-DG on cell survival using crystal violet staining and Western blots for cleaved caspase-3, a marker of apoptosis. We found that S47 tumor cells were 5.7-fold more sensitive to 2-DG (Figure 3A, left panel). In contrast, there was no difference in the sensitivity of these cell lines to the inhibitor of the pentose phosphate pathway, 6-aminonicotinamide (Figure 3A, right panel). Crystal violet staining of treated cells confirmed the markedly increased sensitivity of S47 tumor cells to 2-DG (Figure 3B and 3C) and Western blot analysis indicated that there was increased programmed cell death (cleaved caspase-3) in S47 tumor cells following treatment with 2-DG, compared to WT (Figure 3D). These combined data suggest that the increased glycolysis in S47 tumor cells may constitute a therapeutically targetable vulnerability. 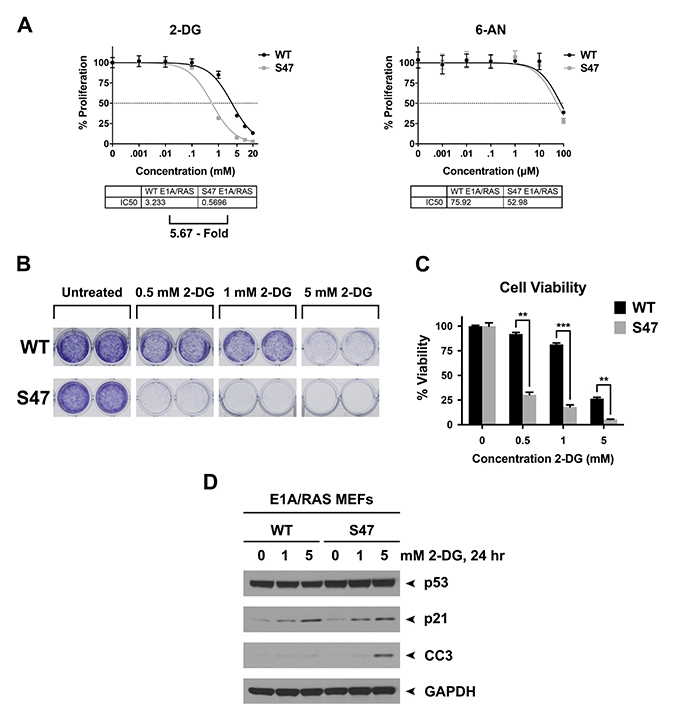 Figure 3: Tumor cells with the S47 variant of p53 show increased sensitivity to 2-Deoxy-D-glucose (2-DG). (A) IC50 analysis using Alamar Blue assays in WT and S47 E1A/RAS tumor cells treated with 2-DG (left panel) or the pentose phosphate pathway inhibitor 6-aminonicotinamide (6-AN, right panel). (B) WT and S47 E1A/RAS MEFs were plated at a density of 10,000 cells per well in 24-well plates. The next day, cells were treated with the indicated concentrations of 2-DG for 48 hours. Cells were then fixed with 10% formalin and stained with 0.5% Crystal Violet. Shown are representative images of duplicate wells from experiments performed in triplicate, which were repeated twice. (C) Quantitation of (B) as per absorbance at 590 nm. **p < 0.01, ***p < 0.001. (D) 700,000 WT and S47 E1A/RAS MEFs were plated in 100-mm dishes. The next day, cell were treated with the indicated doses of 2-DG for 24 hours. Cell lysates were subjected to Western blot analysis, and immunoblotted for p53, cleaved caspase-3 (CC3), p21, and GAPDH (loading control).

WT p53 is known to suppress glycolysis, and mutations in TP53 confer increased glycolytic potential and Warburg metabolism to tumor cells [12–14]. This increased aerobic glycolysis, or Warburg metabolism, is believed to enable tumor cells to shuttle glycolytic intermediates into the synthesis of fatty acids and nucleic acids, and to thus enable enhanced generation of biomass. We previously showed that S47 cells transformed with the oncogene combinations E1A/RAS or MYC/RAS show increased transformed properties, compared to transformed cells with WT p53. As one example, S47 tumor cells show markedly increased growth as xenograft tumors, along with increased vascularization; they also show increased proliferation in low-serum conditions [7]. These findings led us to hypothesize that the metabolism of WT and S47 tumor cells might be distinct. We show here-in that transformed S47 tumor cells show increased use of glycolysis for energy. This finding is interesting in light of our previously published reports that the codon 72 variants in p53 also show differences in metabolism [3, 15, 16]. We also find that S47 tumor cells are more sensitive to the glycolytic inhibitor 2-DG. We posit that the increased reliance of S47 tumor cells on glycolytic metabolism represents a new actionable pathway for therapeutic intervention. Interestingly, previous studies have shown that cisplatin and 2-DG can synergize to kill tumor cells by increasing reactive oxygen species [17]; this supports the combination of these two agents in S47 tumors. In addition to our previous efforts [7, 9], the data presented here further emphasize the plausibility of personalizing therapy for African-descent individuals with the S47 variant who have cancer.

Sixty thousand E1A/RAS MEFs were plated in Seahorse 96-well cell culture microplates coated with Cell-Tak (Corning™) and subjected to the Seahorse XF Glycolytic Rate Assay, according to manufacturer’s protocol. Media was changed to Agilent Seahorse XF Base Medium without Phenol Red supplemented with 5.0 mM HEPES prior to the start of the assay. Measurements were performed after injection of three compounds affecting bioenergetics: 0.5 μM Rotenone/Antimycin A (Seahorse Bioscience), and 50 mM 2-deoxy-D-glucose (2-DG) (Seahorse Bioscience). Data are representative of three biological replicates.

This work was supported by R01 CA201430 and CA102184 (M.E.M.), 1S10OD023658-01 (M.E.M) and F32 CA220972 (T.B.). Support for the Core Facilities used in this study was provided by Cancer Center Support Grant (CCSG) CA010815 to The Wistar Institute. The content is solely the responsibility of the authors and does not necessarily represent the official views of the National Institutes of Health. The authors would like to acknowledge the Histotechnology, Laboratory Animal, Molecular Screening and Imaging facilities at The Wistar Institute. The authors would also like to thank Subhasree Basu and Keerthana Gnanapradeepan in the Murphy lab for assistance and thoughtful discussions.