The combination of fluorouracil, leucovorin, irinotecan, and oxaliplatin (FOLFIRINOX) is the standard of care for advanced pancreatic cancer, but causes hematological and gastrointestinal toxicities, leading to treatment delay and dose reduction; optimal modification based on toxicities is needed. Therefore, we evaluated the effect of initial relative dose intensity (RDI) on FOLFIRINOX efficacy by conducting a Japanese nationwide survey. We evaluated overall survival (OS) and progression-free survival (PFS) of patients administered two or more cycles of FOLFIRINOX, and determined RDIs for each drug within the first two cycles. RDI’s effect on efficacy was evaluated using a multivariate analysis with a Cox regression hazard model. Of 399 patients enrolled, 359 and 346 were evaluated for OS and PFS, respectively. Median RDI was 71.8%, 64.7%, 23.4%, and 76.9% for oxaliplatin, irinotecan, and bolus and continuous infusions of 5-FU, respectively. A high RDI for 5-FU bolus resulted in poor prognosis in terms of PFS (hazard ratio: 1.34; p = 0.022) and negatively correlated with objective response (coefficient: −0.70; p = 0.021), and a high RDI for CPT-11 positively correlated with objective response (coefficient: 1.02; p = 0.031). In conclusion, low and high RDIs for irinotecan and 5-FU bolus, respectively, resulted in poor FOLFIRINOX efficacy.

FOLFIRINOX can cause hematological and non-hematological toxicities, which are associated with treatment delay, dose reduction, or both in subsequent cycles and decreased dose intensity (DI). Thus, a reduction in the initial dose is warranted, and some studies have reported that the efficacy of a modified regimen was non-inferior to that of the original [5–8]. Based on these results, a modified FOLFIRINOX regimen is widely used globally [6, 7, 9]. However, the initial doses or post-initiation dose modifications were different in each study, and the optimal modification remains unknown. Therefore, in this study, we evaluated the effects of relative DI (RDI) of each constituent of FOLFIRINOX on survival benefits in patients with advanced pancreatic cancer, to clarify the optimal initiation and ongoing treatment dose modifications.

Of the 406 patients, seven were excluded for the following reasons: treatment did not coincide with the study period, double registration (two patients each), treatment did not include CPT-11, disease status was resectable, and voluntary withdrawal (one patient each). Moreover, we excluded an additional 40 patients because they discontinued FOLFIRINOX in the first cycle and 53 in the analysis of progression-free survival (PFS) because they showed progression in the second cycle. Thus, 359 and 346 patients were enrolled in the background and OS analysis and PFS analysis, respectively. Patients’ characteristics are shown in Table 1. 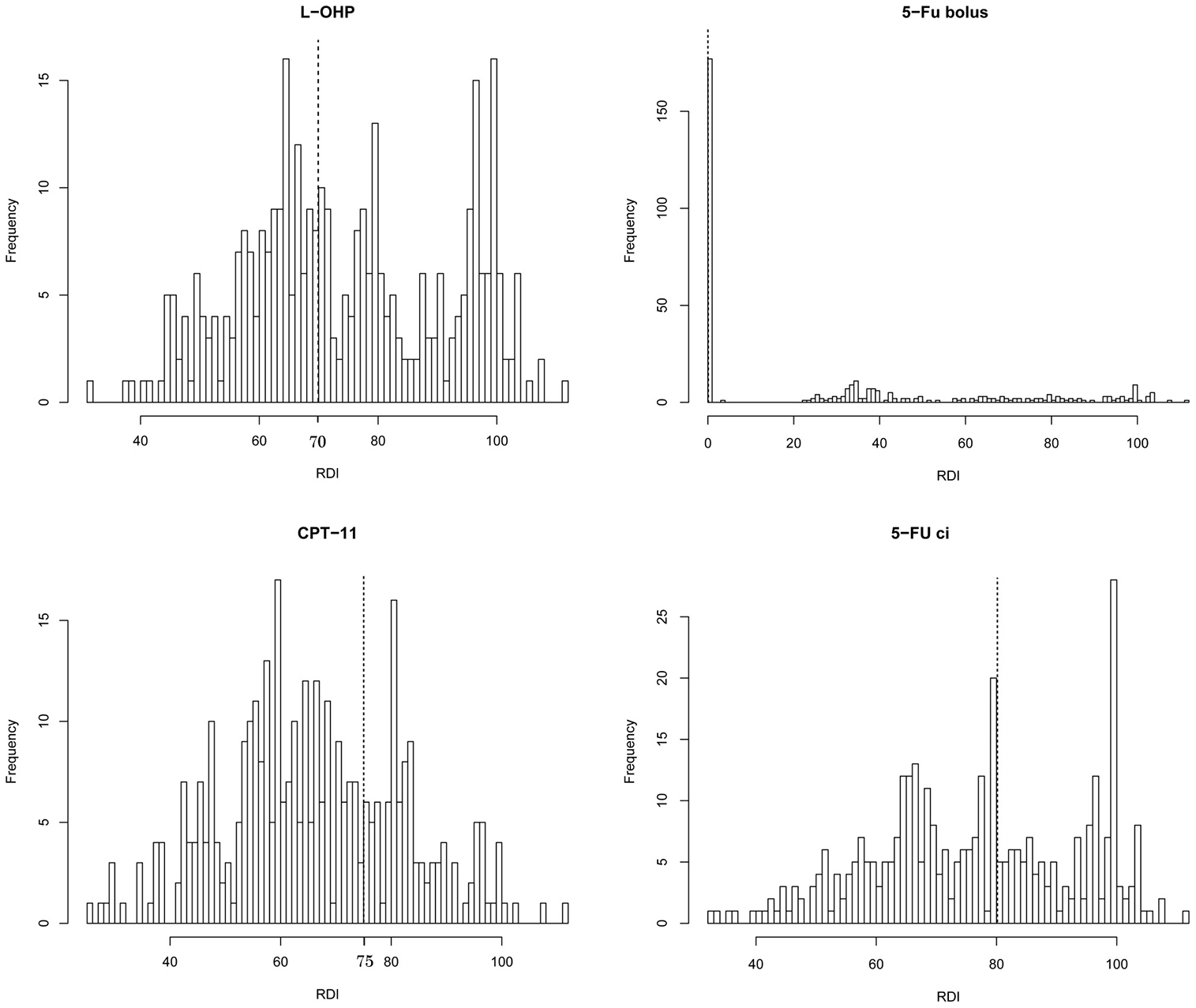 Figure 1: Histogram of the relative dose intensities (RDIs) of each agent in FOLFIRINOX within the first two cycles. The dotted line shows the cut-off values for each agent.

Table 2: Effects of patient characteristics on the relative dose intensities (RDIs) of each agent 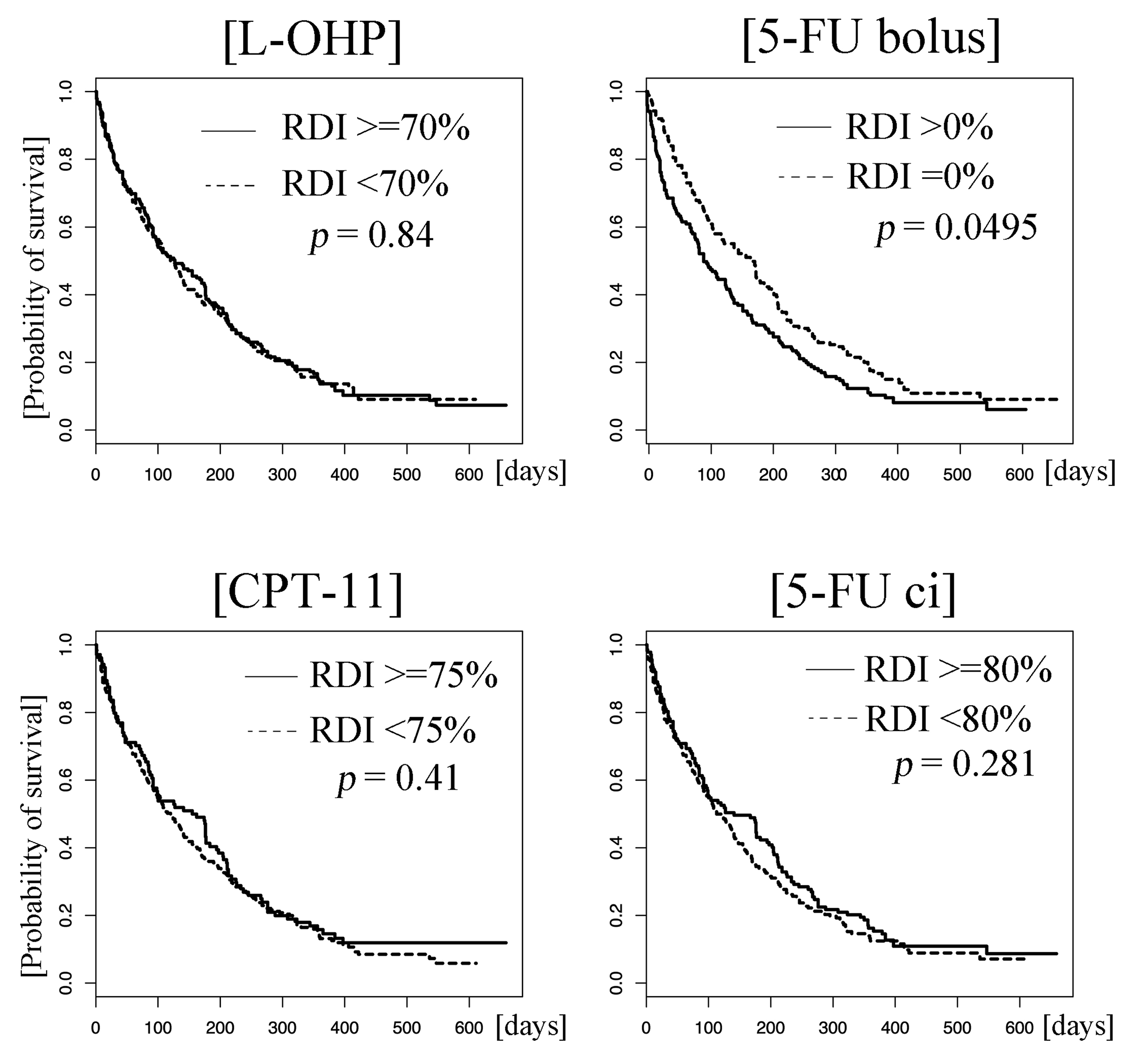 We compared the efficacy of FOLFIRINOX in patients with advanced pancreatic cancer who received drugs at high and low RDIs in the first two cycles to evaluate the impact of RDI on treatment efficacy. The initial RDIs for 5-FU bolus had a negative correlation with PFS and objective response, whereas the RDIs for CPT-11 had a positive effect on objective response.

A modified regimen in which the initial dose is decreased is widely used as it is safe. In addition, a modified regimen might have comparable efficacy to that of the original one, although this hypothesis has not been confirmed in a prospective randomized trial [6, 7]. However, the results of the current study support the maintenance of a high RDI for CPT-11 and non-reduction of the initial dose of CPT-11 to achieve an objective response. Only 59 of 237 patients (24.9%) for whom the initial CPT-11 dose was reduced could receive the second cycle with neither treatment delay nor additional dose reduction. Furthermore, the initial dose of CPT-11 did not affect the RDIs for L-OHP, 5-FU bolus, and 5-FU ci (Table 2), and the original CPT-11 dose was acceptable in terms of the RDIs for the other three agents. Taking this into account, non-reduction of the dose of CPT-11 at the first and second cycle would be favorable, especially in patients with locally advanced or borderline resectable pancreatic cancer, as the aim of the treatment is tumor shrinkage for the following surgery. Regarding the 5-FU bolus, the administration at initiation led to a high RDI and had a negative effect on the PFS and objective response. We speculated that it could be explained by the results of this study that initiation with 5-FU bolus decreased the RDI of CPT-11 (Table 2). Another possible reason was the low RDI of 5-FU ci in patients who received 5-FU bolus although the decrease was not statistically significant. The meta-analysis which showed the use of 5-FU ci was superior to that of 5-FU bolus in colorectal cancer [10] might support our speculation, although 5-FU ci did not show statistically significant effects with respect to any indicators of efficacy in our study and the type of cancer was different. In addition, patient’s characteristics had an influence because there were more patients who had prior history of chemotherapy in the high RDI group of 5-FU bolus than in the low RDI group (Supplementary Table 2). Nonetheless, optimal dose modification remains a clinical question in patients with metastatic pancreatic cancer whose primary treatment endpoint is OS, as none of the RDIs significantly influence OS.

The efficacy of systemic chemotherapy using cytotoxic agents for unresectable solid tumors basically depends on the dose rather than DI [11, 12]; however, in some types of cancer such as lung, breast, and ovarian cancers, the RDI for chemotherapy with cytotoxic agents was related to its efficacy [11, 13–15]. Regarding FOLFIRINOX for advanced pancreatic cancer, the effect of RDI on the efficacy has not been documented, except for in a study by Lee et al. [16] who reported that the cumulative RDI of FOLFIRINOX >70% was related to the radiological response. We evaluated the initial RDI, not the cumulative value, to avoid potential biases; a decrease in the dose of each agent due to toxicities, especially cumulative neuropathy caused by L-OHP, is often required at a later stage and may result in the cumulative RDI being lower in patients who have longer PFS than in those who discontinue FOLFIRINOX within a short period. In addition, we separated the RDIs of each agent to clarify doses that should not be reduced. Another concern is the cut-off value for evaluating the influence of RDI on efficacy. Although we set the cut-off values based on a model case, they were almost the same as the median RDIs in the phase III study of FOLFIRINOX: 78%, 81%, and 82% for L-OHP, CPT-11, and 5-FU, respectively [3]. In other types of cancer, RDI cut-off values ranging from 70% to 80% were reported as a predictive factor for prolonged PFS [13–15], and we consider that the cut-off values in the current study are acceptable.

There are some limitations to this study. First, the patients’ characteristics were diverse. Disease status (locally advanced, metastatic, or recurrent) and the indication of FOLFIRINOX (first-line or later) were obviously important for evaluating the prognostic factors for OS. Additionally, because of the variations in patient characteristics, the RDIs of none of the agents had a significant influence on OS. Second, the study design was retrospective, and decisions of treatment delay and dose reduction were dependent on the physician’s discretion. Third, the study excluded patients who discontinued the regimen within two cycles to evaluate the influence of initial RDIs on the following prognosis. Therefore, the results of our study cannot predict the probability of early progression within two cycles. Fourth, we did not evaluate the prophylactic use of G-CSF. G-CSF can lead to a higher RDI without a decrease in the initial dose, although treatment delay, dose reduction, or both are not only attributable to neutropenia but also to thrombocytopenia or non-hematologic toxicities.

Despite these limitations, to the best of our knowledge, this is the first study to evaluate the effect of the initial RDI of each drug constituent of FOLFIRINOX on its efficacy in patients with advanced pancreatic cancer. CPT-11 RDI of >75% predicts the radiological response and 5-FU RDI of >0% predicts poor efficacy of FOLFIRINOX. Therefore, initiation of CPT-11 administration at the original dose with omission of 5-FU bolus and dose reductions for agents other than CPT-11 in cases of adverse events might be the best approach to achieve efficacy. A prospective study is needed to verify the findings.

In a nationwide, multicenter, observational study of FOLFIRINOX chemotherapy (JASPAC06), each participating institution consecutively registered all patients with unresectable or recurrent pancreatic cancer who received FOLFIRINOX therapy at least once within 1 year from December 20, 2013 (the approval date of L-OHP and CPT-11 for advanced pancreatic cancer in Japan). In total, 406 patients from 27 institutions were registered between November 2014 and May 2015.

Written informed consent was obtained from patients who had been receiving FOLFIRINOX at the time of registration or those who initiated FOLFIRINOX during the registration period. Patients who had discontinued FOLFIRINOX until the time of registration were informed of their right to opt out via public announcements at each participating institution. This study was approved by the institutional review board of each participating institution and conducted based on the Ethical Guidelines of Epidemiological Research. This study was registered on the University Hospital Medical Information Network (UMIN000014658).

The original regimen consisted of 85 mg/m2 L-OHP, 200 mg/m2 l-LV, 180 mg/m2 CPT-11, and 400 mg/m2 5-FU (5-FU bolus), followed by a continuous intravenous infusion of 2400 mg/m2 5-FU (5-FU ci) for 46 h every 2 weeks, which was the same as that in previous prospective studies [3, 17]. The dose of each drug at baseline and during treatment was sometimes reduced, and treatment was delayed at the physician’s discretion based on the patient’s condition and toxicities observed (Supplementary Table 3).

The median OS and PFS and the corresponding 95% confidence intervals (CIs) were determined using the Kaplan–Meier method. The influence of the RDI of each agent on OS or PFS was evaluated using a log-rank test or multivariate Cox proportional hazard model to adjust for the patients’ background characteristics. Similar to the association between RDIs and patients’ backgrounds, the association between RDIs and objective responses was also evaluated using a multivariate logistic model. In all analyses, covariates were considered statistically significant if p was <0.05 for the null hypothesis of no effect.