Ovarian cancer is the most lethal gynecological malignancy and the fifth leading cause of cancer-related death in women in developed countries [1]. The majority of ovarian cancers are epithelial ovarian cancer (EOC) and the standard therapy for advanced EOC involves both cytoreductive surgery and intensive chemotherapy, with combination paclitaxel and platinum as the standard adjuvant chemotherapy regimen [2]. However, despite these multimodal treatments, patients eventually face recurrence and the 5-year survival rate remains, at most, 30% and has not improved during the past 20 years [1]. The major cause of recurrence is acquired resistance to chemotherapeutic agents. Therefore, it is urgent to elucidate the underlying mechanisms that lead to chemoresistance to improve the efficacy of therapeutic strategies.

The combination of taxane and platinum has remained the first-line chemotherapy for ovarian cancer treatment for the past 20 years [2, 3]. Paclitaxel is the most widely used taxane and is one of key drugs for treating EOC. Thus, paclitaxel resistance determines the fate of patients with EOC. Over the past decade, considerable progress has been made toward understanding the mechanisms that underlie paclitaxel resistance; however, the molecular mechanisms underlying this resistance are still not completely elucidated. microRNAs (miRNAs) are endogenous non-coding RNAs approximately 22-nucleotides in length that play important roles in a wide range of physiological and pathophysiological processes by regulating gene expression by binding to the 3′-untranslated region (UTR) of target genes. More than 50% of miRNA target genes are located in cancer-associated genomic regions or in fragile sites, suggesting that miRNAs are deeply involved in cancer pathogenesis [4]. Emerging evidence shows that chemoresistance is also affected by dysregulation of miRNAs in a variety of cancer types [5]. While several miRNAs have been reported to be associated with paclitaxel resistance, our understanding of the role of miRNAs in this process still remains limited. 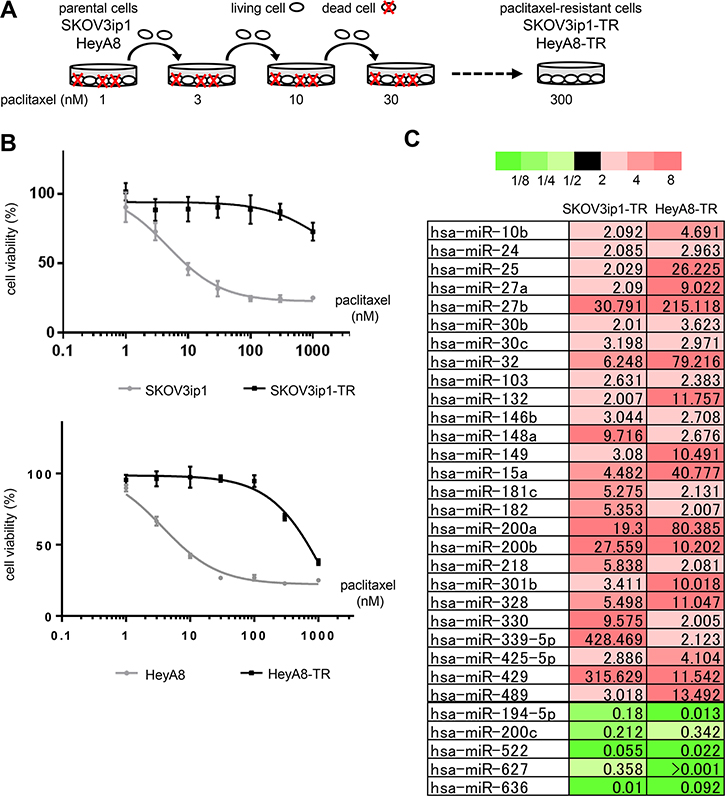 Figure 1: miR-194-5p is downregulated in paclitaxel-resistant ovarian cancer cell lines. (A) Scheme for the establishment of two paclitaxel-resistant sublines, SKOV3ip1-TR and HeyA8-TR, derived from SKOV3ip1 and HeyA8, respectively. These cells were exposed to stepwise increases of paclitaxel until a concentration of 300 nmol/L. (B) In vitro survival assay of ovarian cancer cell lines upon paclitaxel treatment. Growth inhibitory effects of paclitaxel treatment were determined using an MTS assay. Experiments were performed in triplicate. Data are represented as mean ± SE and are obtained from three independent experiments. (C) miRNA microarray. List of miRNAs that exhibited increased (> 2-fold, red columns) or decreased (< 0.5-fold, green columns) expression in both paclitaxel-resistant sublines compared with their corresponding parental cell lines. 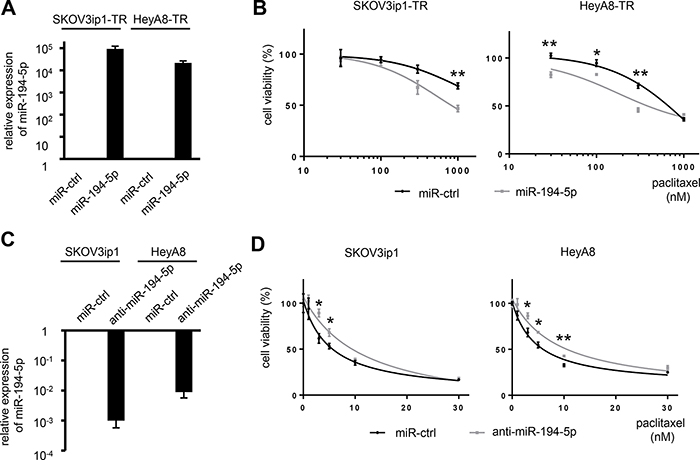 Figure 2: miR-194-5p modulates sensitivity to paclitaxel in ovarian cancer cell lines. (A) miRNA qRT-PCR. Cells were transfected with pre-miR-194-5p (miR-194-5p) or control miR (miR-ctrl). Twenty-four hours later, expression of miR-194-5p relative to RNU6B expression was calculated using the 2-ΔΔCT method. Relative fold differences are presented. (B) MTS assay. Twenty-four hours after transfection with miR-194-5p or control miR-ctrl, cells were treated with paclitaxel for 72 hours and cell viability was assessed. Cell viability is shown relative to that in paclitaxel-free conditions. (C) miRNA qRT-PCR. Cells were transfected with anti-miR-194-5p or miR-ctrl for 24 hours. (D) MTS assay. As described in B, cells were transfected with anti-miR-194 or miR-ctrl and cell viability was assessed. Experiments were performed in triplicate. Data are represented as mean ± SE and are obtained from three independent experiments. *P < 0.05; **P < 0.01.

To determine how miR-194-5p downregulation is involved in paclitaxel resistance in ovarian cancer, putative targets of miR-194-5p were searched through in silico analyses. Among hundreds of putative target genes, we extracted genes related to chemoresistance and focused on MDM2 as a candidate. TargetScan [9], and Diana Tools [10] revealed a putative miR-194-5p target site in the 3′-UTR of MDM2 mRNA (position 330–336 of the MDM2 3′-UTR, Figure 3A). Thus, we constructed a pMIR-REPORT firefly luciferase miRNA expression reporter vector containing this putative miR-194-5p binding site for use in luciferase reporter assays. A significant decrease in relative luciferase activity was observed in SKOV3ip1-TR (0.50-fold; P < 0.001) cells transfected with miR-194-5p precursor as compared to those transfected with control miRNA (Figure 3B left). Conversely, site-specific mutation of the target sequence prevented the downregulation of luciferase activity induced by pre-miR-194-5p (Figure 3B right). These results indicated that miR-194-5p directly interacts with the MDM2 3ʹ-UTR. Western blot analysis revealed that paclitaxel-resistant cells showed a higher level of MDM2 than their parental cell lines (Figure 3C). Moreover, the transduction of miR-194-5p in paclitaxel-resistant cells decreased MDM2 expression (Figure 3D). To analyze the involvement of MDM2 expression in paclitaxel resistance, a public database including the clinical information of 1436 ovarian cancer patients was analyzed [11]. Among 632 patients who were treated with paclitaxel, those with higher of MDM2 expression showed significantly shorter progression-free survival (P = 0.0034, Figure 3E), suggesting that MDM2 might be related with paclitaxel resistance. Collectively, our data indicated that MDM2 is a direct target of miR-194-5p and its expression is upregulated during the acquisition of paclitaxel resistance. 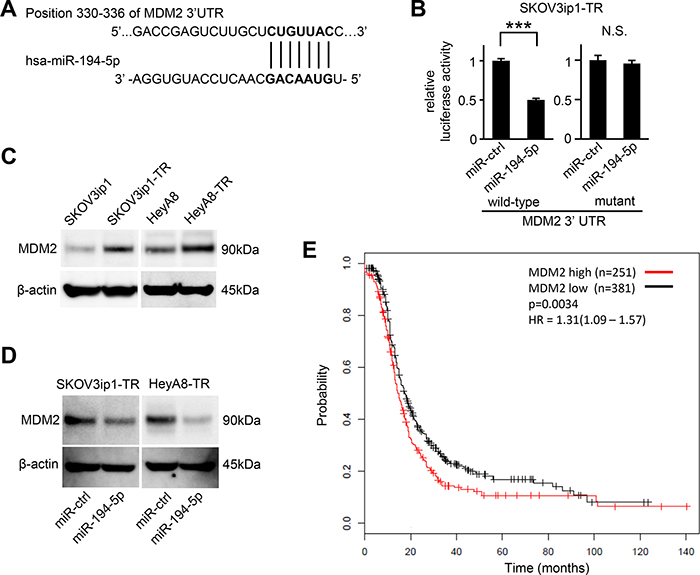 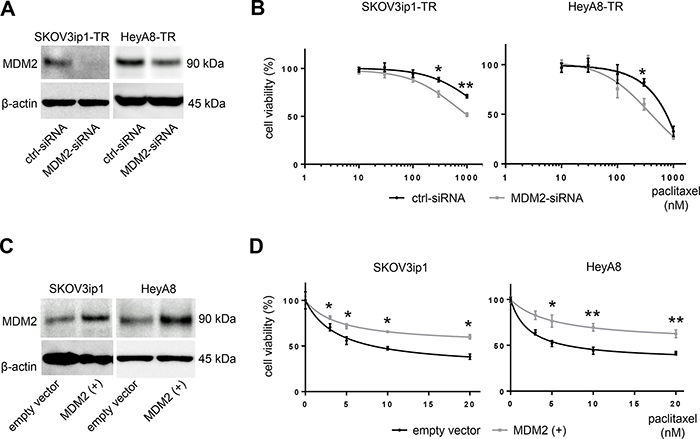 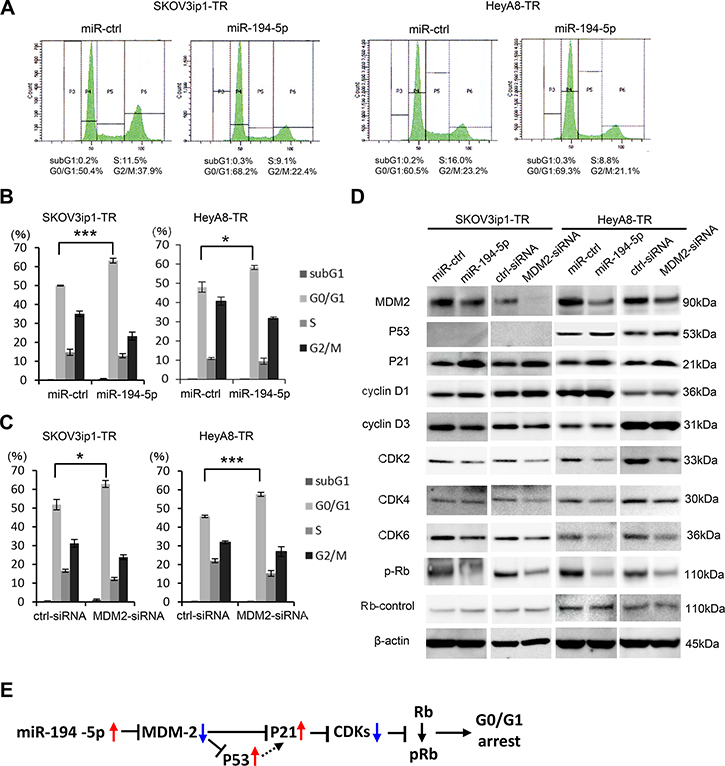 Overcoming chemoresistance is one of the major challenges in treating cancer. Chemoresistance is classified into two types: inherent resistance to the drug, and acquired resistance mediated by prolonged exposure to the drug. Given that the initial treatment of paclitaxel combined with platinum shows a high response rate (approximately 70%) in patients with advanced ovarian cancer [18, 19], paclitaxel remains the first-line chemotherapy for ovarian cancer treatment [20]. However, acquired resistance eventually occurs in the majority of patients, limiting the long-term efficacy of this drug. Indeed, the development of drug resistance is responsible for approximately 90% of the deaths among patients with advanced ovarian cancer [21]. Although several molecular mechanisms underlying paclitaxel resistance have been reported [22], these mechanisms are complex, involving multiple steps and multiple genes, and have not been yet fully elucidated. This is supported by the fact that no curative treatment option exists after paclitaxel resistance is acquired.

Our data suggest that restoring miR-194-5p expression has the potential to overcome paclitaxel resistance. Although miRNA replacement therapy has been attempted in preclinical trials and many promising results have been reported, the outcomes of a few translational clinical trials for miRNA replacement therapy have been disappointing so far [33]. However, in 2017, van Zandwijk et al. reported a Phase I TargomiR trial with miR-16 mimics to treat patients with malignant pleural mesothelioma (NCT02369198) [34]. They found an acceptable safety profile and early signs of activity of TargomiRs and decided to enter a Phase II study. In this study, a bacterial-derived transfection method was used. Improving miRNA delivery systems by developing more specific carriers and manipulating epigenetic factors that enhance miRNA function will be the keys for the future success of miRNA replacement therapy [33].

In conclusion, in this study, we found that miR-194-5p loss is deeply involved in acquired resistance to paclitaxel and restoring miR-194-5p expression attenuates paclitaxel resistance by targeting MDM2 in ovarian cancer cells. Although there is still a long way to go before the establishment of an effective and nontoxic miRNA replacement therapy targeting miR-194-5p, the results of this study suggest this strategy as a viable option for treating paclitaxel-resistant ovarian cancer that should be further explored for future clinical applications.

The SKOV3ip1 cell line was generously provided by Dr. Ernst Lengyel (University of Chicago, IL). The HeyA8 cell line was generously provided by Dr. Anil Sood (MD Anderson Cancer Center, TX). Cells were cultured in DMEM supplemented with 10% FBS and 100 U/mL penicillin/streptomycin and incubated in 95% air/5% CO2 at 37°C. Cells were authenticated by short tandem repeat DNA profiling at Takara-Bio Inc. (Otsu, Japan) and were used for this study within 6 months of resuscitation.

Total RNA was collected from SKOV3ip1, SKOV3ip1-TR, HeyA8, and HeyA8-TR cells using TRIzol and were subjected to miRNA RT-PCR. For paclitaxel-resistant cells, RNA was collected after 48 hours of culture in the absence of paclitaxel. miRNA expression profiling was performed using the stem loop RT-qPCR-based TaqMan Human MicroRNA Array Set v2.0 (Applied Biosystems, Carlsbad, CA; #4398965) according to the manufacturer’s protocol.

Ovarian cancer cells were transfected with precursor miRNA (pre-hsa-miR-194-5p, #PM10004) or inhibitor miRNA (anti-hsa-miR-194-5p, #AM10004) at a concentration of 50 nM. Pre-miR miRNA Precursor Negative Control #1 (#AM17110) was used as a control. All oligonucleotides were purchased from Thermo Fischer Scientific (Waltham, MA). Oligonucleotide transfection was performed using Lipofectamine 2000 according to the manufacturer’s instructions. Twenty-four to 48 hours after transfection, cells were used for subsequent analysis.

Ovarian cancer cells (3 × 103 cells/well) were seeded into 96-well plates. The cells were cultured for 24 hours prior to the addition of paclitaxel. Paclitaxel was diluted to a range of concentrations (1–1000 nM) in DMEM substituted with 2% FBS and was added to the cells; cells were incubated for 72–96 hours. Thereafter, 20 μL of MTS (3-(4,5-dimethylthiazol-2-yl)-5-(3-carboxymethoxyphenyl)-2-(4-sulfophenyl)-2H-tetrazolium, inner salt) (Promega, Fitchburg, WI) solution was added to the cells, which were then incubated at 37°C for 1 h. The optical density was measured at 490 nm. Relative cell viability was normalized to viability in paclitaxel-free conditions. IC50 values were calculated using the GraphPad Prism 7 software (GraphPad Software, San Diego, CA).

Cells (2 × 105) were plated onto 6-well dishes and transfected with oligonucleotides. Twenty-four to 48 h after transfection, cells were collected and fixed overnight in 75% ethanol. Then, cells were stained with 50 μg/ml propidium iodide (P4864, Sigma) in the presence of 100 μg/ml RNase A (Roche) for 1 h at 4°C. Cell cycle distribution was determined by analyzing 1 × 104 cells using a BD FACSCanto II flow cytometer (BD, Franklin Lakes, NJ). Data analysis was performed using BD FACSDiva software (BD).

Synthetic oligonucleotides with 4 copies of the MDM2 3′-UTR (GACCGAGTCTTGCTCTGTTACCC; bp 316–338 of ENST00000462284), which were predicted to bind with hsa-miR-194-5p, or 4 copies of a mutated version of the sequence (GAGCGTGTCTTGCTCTCTTTCCC) with MluΙ and XhoΙ restriction sites at each end, were cloned into the pMIR-REPORT firefly luciferase miRNA expression reporter vector (Applied Biosystems; #AM5795). After 5 × 104 ovarian cancer cells were seeded onto 24-well plates, 0.5 μg of the pMIR-REPORT vector, 0.05 μg of the pRL-TK Renilla luciferase control vector (Promega, Madison, WI, USA; #E2241), and 40 pM pre-miR-194-5p or the negative control miRNA were co-transfected using Lipofectamine 2000. Twenty-four hours after transfection, luciferase activity was measured using the Dual-Luciferase Reporter Assay System (Promega; #E1910) according to the manufacturer’s instructions. Firefly luciferase activities were normalized to Renilla luciferase activities.

Analysis of the prognostic value of MDM2 using a public database

The prognostic value of MDM2 gene expression was determined in 632 patients with serous ovarian cancer who were treated with paclitaxel, using the Kaplan-Meier Plotter, which is a database that integrates gene expression data and clinical data [12]. The patient samples were split into two groups (high or low MDM2 expression) automatically and compared using a Kaplan-Meier survival plot. Hazard ratios with 95% confidence intervals and log rank p values were calculated.

Except for RT-qPCR data, all data were expressed as mean ± SEM. For RT-qPCR data, the error bars represent standard deviation calculated by the StepOnePlus Real-Time PCR System. Differences were analyzed using the Mann-Whitney U test. To analyze the correlation between two variables, the Pearson’s product-moment coefficient of correlation and associated P value were calculated. Differences were considered statistically significant at P < 0.05.

All authors have no potential conflicts of interest to disclose.