Outcomes for children with high-grade gliomas (HGG) remain dismal despite aggressive treatment strategies. The use of targeted therapy for BRAFV600E mutated malignancies including HGG is being explored as a potentially well tolerated and effective therapeutic option. The results of adult melanoma studies demonstrating that combination therapy with BRAF inhibitors and MEK inhibitors results in prolonged survival led us to employ this treatment strategy in children with BRAFV600E mutated HGG. In this case series, we describe three pediatric patients with HGG with confirmed BRAFV600E mutation who demonstrated responses to combination therapy with dabrafenib and trametinib.

Astrocytoma is the most common brain tumor in children, with high-grade gliomas (HGG) comprising 11% of all pediatric brain tumors [1]. Survival rates for children with HGG are poor, with 3-year overall survival (OS) of 22 ± 5% despite multi-modal therapy highlighting the need for novel therapeutic options [2].

Alterations in the MAP kinase (MAPK) pathway have been implicated in a number of adult and pediatric malignancies [3–5]. The BRAFV600E point mutation, an amino acid substitution from valine to glutamic acid at position 600 in BRAF, results in constitutive activation of downstream MEK/ERK. This mutation is commonly detected in malignant melanoma and in 10–15% of HGG [5–8].

Clinical trials exploring the use BRAF inhibitors (vemurafenib and dabrafenib) in adults with BRAFV600E mutated malignancies have provided valuable information regarding the efficacy and potential side effects of these agents. Large clinical trials of BRAF inhibitors in adults with BRAFV600E mutated melanoma resulted in tumor response and prolonged progression free survival (PFS) and OS [9, 10]. Unfortunately, most tumors, including those that initially demonstrated significant response, eventually developed resistance resulting in disease progression after six to eight months [9, 10]. Resistance of BRAF mutated malignancies to BRAF inhibitors is often due to reactivation of the MAPK pathway [11–13]. In an attempt to overcome this mechanism of resistance, researchers have combined BRAF inhibitors with downstream MEK inhibitors (trametinib) [12–14]. Combination therapy in adults with BRAF mutated melanoma has yielded higher objective response rates, prolonged survival rates, decreased rates of resistance, and decreased incidence of side effects most notably skin toxicities when compared to BRAF inhibitor monotherapy [9, 10, 15].

Clinical trials examining the use of BRAF inhibitors alone and in combination with MEK inhibitors in children with BRAFV600E mutated malignancies are currently underway. To date, the literature is limited to case reports and series, revealing promising results ranging from partial to complete and sustained responses [16–20]. There are currently no published reports of children with BRAFV600E mutated malignancies treated upfront with BRAF and MEK inhibitor combination therapy.

In this series, we describe three pediatric patients with BRAFV600E mutated HGG treated with dabrafenib and trametinib. Mutational status was assessed using the OncoScan microarray platform (ThermoFisher), which identifies genome-wide copy number and loss of heterozygosity detection as well as a limited number of frequently tested somatic mutations [21]. One patient received the combination as maintenance therapy, one at the time of disease progression, while the third patient was treated with combination therapy at initial diagnosis.

A 13-year-old male presented with a one-month history of fatigue, emesis and diffuse headache. Computed tomography (CT) and subsequent magnetic resonance imaging (MRI) revealed a 5.9 × 6.5 × 6.4 cm cortically based, heterogeneously enhancing mass involving the left frontal lobe (Figure 1A). He underwent a gross total resection of the tumor (Figure 1B) and pathology was consistent with anaplastic astroblastoma (Figure 1D, 1E). Molecular testing using the OncoScan microarray platform revealed a tetraploid tumor with four copies of all the autosomes, except for chromosome 1, and two copies of each X and Y. Analysis revealed a BRAFV600E mutation and a copy number loss of chromosome 9 encompassing CDKN2A/B. 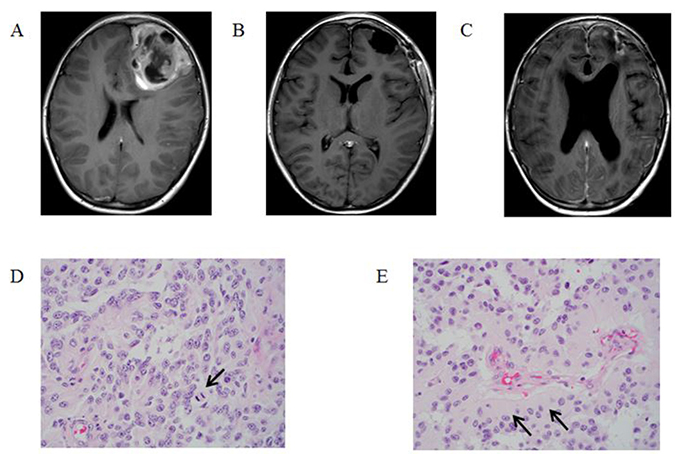 Figure 1: T1-Weighted MRI post gadolinium-based contrast images: (A) at diagnosis, (B) post resection, and (C) at time of recurrence. Histopathologic review of tumor specimen after resection: (D) a moderately to highly cellular neoplasm with scattered mitotic figures (arrow) and a pseudopapillary growth pattern, and (E) pseudorosettes with thick cytoplasmic processes extending towards the vessels (arrows).

Following resection, the patient underwent focal radiation therapy (59.4 Gy in 33 fractions) with concurrent temozolomide (90 mg/m2/day). Post-irradiation, the patient was started on maintenance therapy with dabrafenib (4.5 mg/kg/day divided twice daily) and trametinib (2 mg/day once daily). One month after starting maintenance therapy, he developed mild fatigue. Trametinib was discontinued six months later due to family preference. He had no other treatment-attributable toxicities. The patient remained disease free for 20 months at which time he presented with disseminated disease recurrence and died 2 months later (Figure 1C).

A 12-year-old female presented with a three-week history of diffuse headache and three days of diplopia and blurry vision. Initial head CT demonstrated edema in the left temporal and frontal lobes. Subsequent MRI revealed a 3.8 × 2.4 × 3.1 cm cortically based mass within the left superior temporal gyrus (Figure 2A). 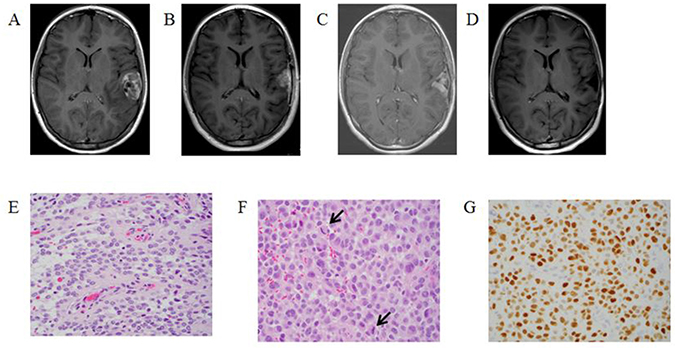 A four-year-old female presented after an episode of headache followed by loss of consciousness. On physical exam she was noted to have a left sided visual field deficit. MRI of the brain demonstrated a 6 × 4.6 × 5 cm mass centered in the hypothalamus with expansion into the suprasellar area and pons with intratumoral hemorrhage (Figure 3A). The patient underwent a biopsy and ventriculoperitoneal shunt placement. Pathology was consistent with anaplastic ganglioglioma (Figure 3D, 3E) and OncoScan revealed a BRAFV600E mutation. In addition to the BRAFV600E mutation, a deletion on the short arm of chromosome 4 and numerous copy number alterations spanning chromosome 22 were also discovered. No CDKN2A loss was identified. Given the young age of the child and desire to avoid irradiation, the decision was made to proceed with targeted therapy. The patient was started on dabrafenib (4.5 mg/kg/day divided twice daily) upfront with the addition of trametinib (0.025 mg/kg/day) one month later. Four weeks after initiation of therapy her visual deficit resolved. MRI obtained three months after initiation of therapy demonstrated an 85% decrease in tumor size (Figure 3B). MRI performed after eight months of therapy demonstrated a further decrease in size (Figure 3C). 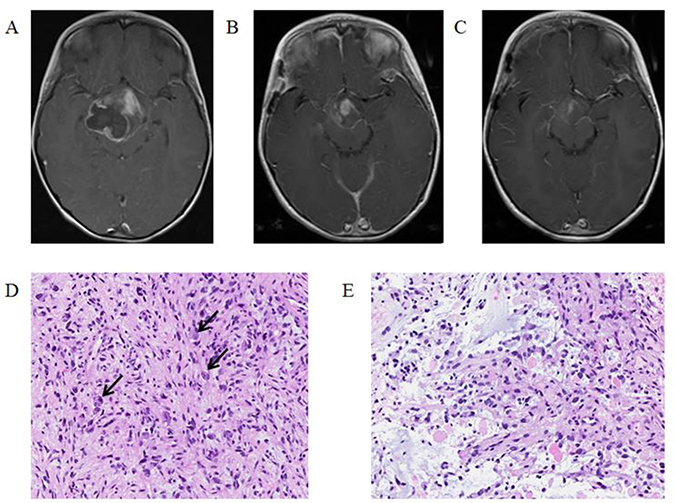 The patient reports no side effects and has remained on therapy with stable disease for 23 months.

Despite efforts over the past several decades, survival rates for children with HGG remain dismal [2]. While extent of resection is a major factor in survival, it puts patients at risk for devastating neurologic deficits. Adjuvant therapy is associated with many short and long term effects and offers little survival benefit [22, 23]. Given the lack of effective therapies for patients with HGG, the use of molecularly targeted agents is of particular interest in the treatment of this disease.

The use of dabrafenib in combination with trametinib in children with newly diagnosed BRAFV600 mutated LGG and relapsed/refractory HGG is currently being investigated (https://clinicaltrials.gov: NCT02684058). Additionally, there are clinical trials under development and in progress examining the use of second generation BRAF inhibitors in children and adults with BRAF mutated malignancies (https://clinicaltrials.gov: NCT03429803, NCT02428712).

However, for the use of BRAF inhibitor monotherapy still raises the concern for development of serious side effects, particularly cutaneous side effects such as rash and squamous cell carcinoma. Studies of the use of combination therapy in adult BRAF mutated melanoma have demonstrated a decreased incidence of cutaneous side effects when compared to BRAF inhibitor monotherapy. Robert et al. reported that cutaneous adverse events were more common in subjects receiving vemurafenib versus those receiving combination therapy including rash (43% vs. 22%), photosensitivity reaction (22% vs. 4%), skin papillomas (23% vs. 2%) and squamous-cell carcinomas and keratoacanthomas (18% vs. 1%) [27]. The pediatric patient described by Marks, et al. experienced a morbilliform rash consistent with a Type IV allergic reaction when treated with vemurafenib. When the patient was later treated with a combination of dabrafenib and trametinib, the patient experienced no cutaneous side effects [20].

In conclusion, this case series presents evidence that combination BRAF and MEK inhibitor therapy is an effective and appropriate treatment option and that it is safe for children with BRAFV600E mutated HGG. And although we cannot draw conclusions based on this series, our experience highlights the importance of molecular testing and supports the ongoing development of clinical trials examining the use of combination therapy for children with BRAFV600E mutated HGG including those with newly diagnosed disease.