Growth in approximately 70% of breast cancers depends on estrogen receptor (ER) expression and its related signal transduction pathway, while growth in approximately 20% of breast cancers depends on the HER2/ERBB2 status [1, 2]. Endocrine therapies have provided significant benefits for patients with ER-positive breast cancers [3, 4], and HER2-targeted therapeutics have similarly provided benefits for patients with HER2-positive breast cancers [2, 5]. However, the generation of refractory tumors that are resistant to these therapies is a serious obstacle to the further improvement of treatments for breast cancer patients [6, 7]. Identifying other genes or molecules involved in the progression of breast cancer is thus expected to contribute to the more precise prediction of the outcomes of and treatments for refractory tumors [8].

Because YBX1 was identified as an oncoprotein in breast cancer via transgenic knock-in animal models of various types of breast cancer [16], it is therefore expected that YBX1 may play a specific and essential role in the tumorigenesis and malignant progression of breast cancer. YBX1 converts human mammary epithelial cells into breast cancer cells capable of anchorage-independent growth [17]. It also promotes cell growth and increases the expression of HER2 as well as other genes that mediate the cell cycle, cell proliferation, and drug resistance in breast cancer cells [18–23]. YBX1 decreases the response to tamoxifen and fulvestrant in ER-positive breast cancer through the downregulation of the ER protein [24], and antiestrogen resistance is also mediated through YBX1 activation by FGFR2 [25]. We previously demonstrated that the resistance of breast cancer to antiestrogens is mediated through both increased proteasomal ER degradation and increased transcriptional activation of HER2 by YBX1 [26] and that YBX1 negatively and positively correlates with ER and HER2 expression, respectively, in clinical specimens from breast cancer patients as well as in breast cancer cells in vitro and in vivo [21, 26]. However, the mechanism underlying the predictive ability of YBX1 for a poor prognosis is still not well understood. 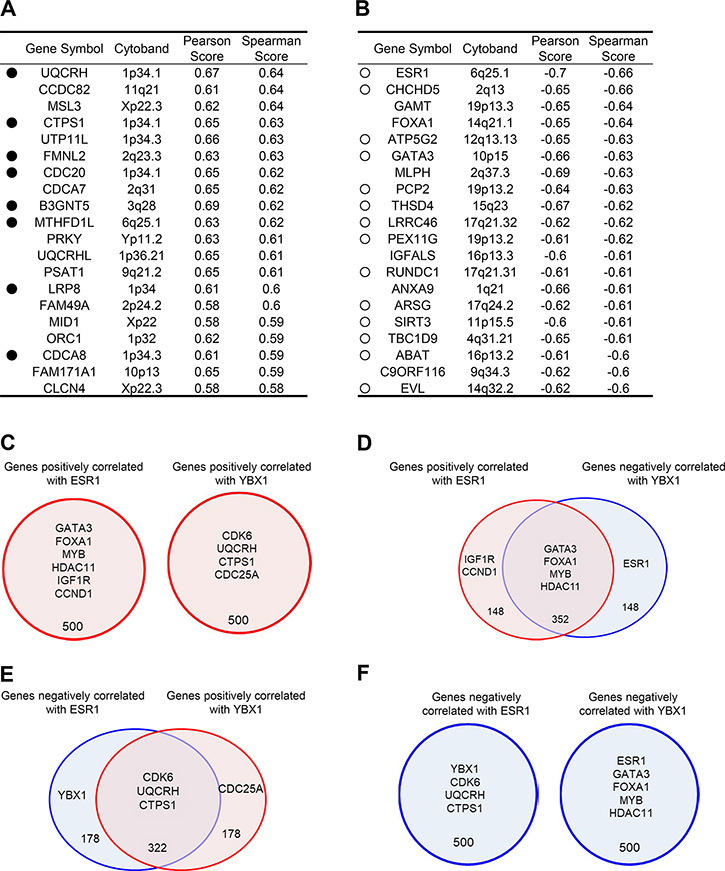 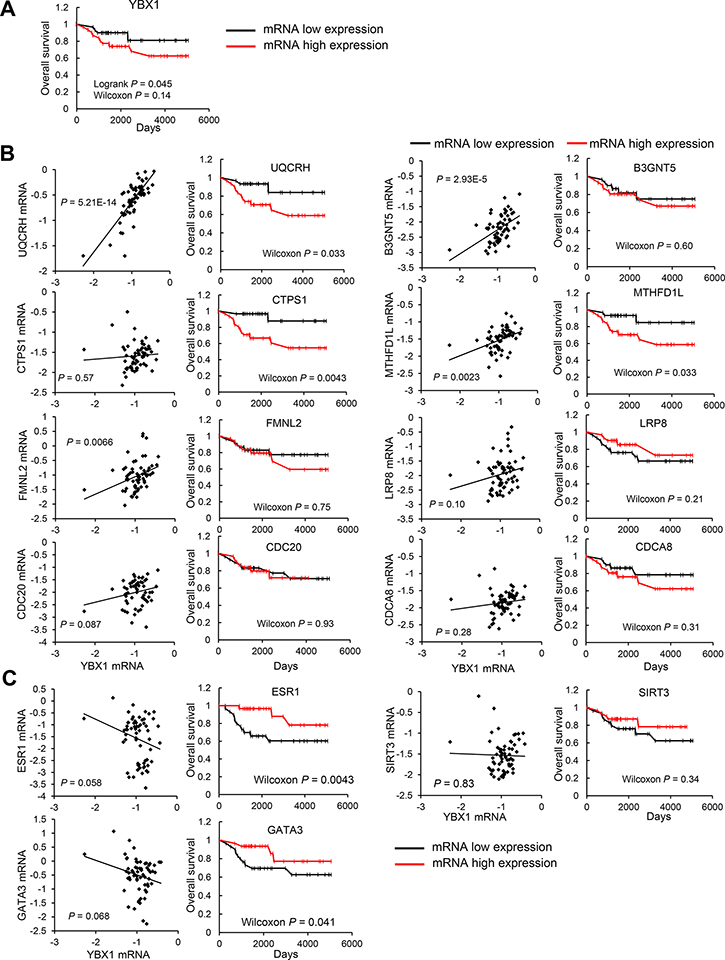 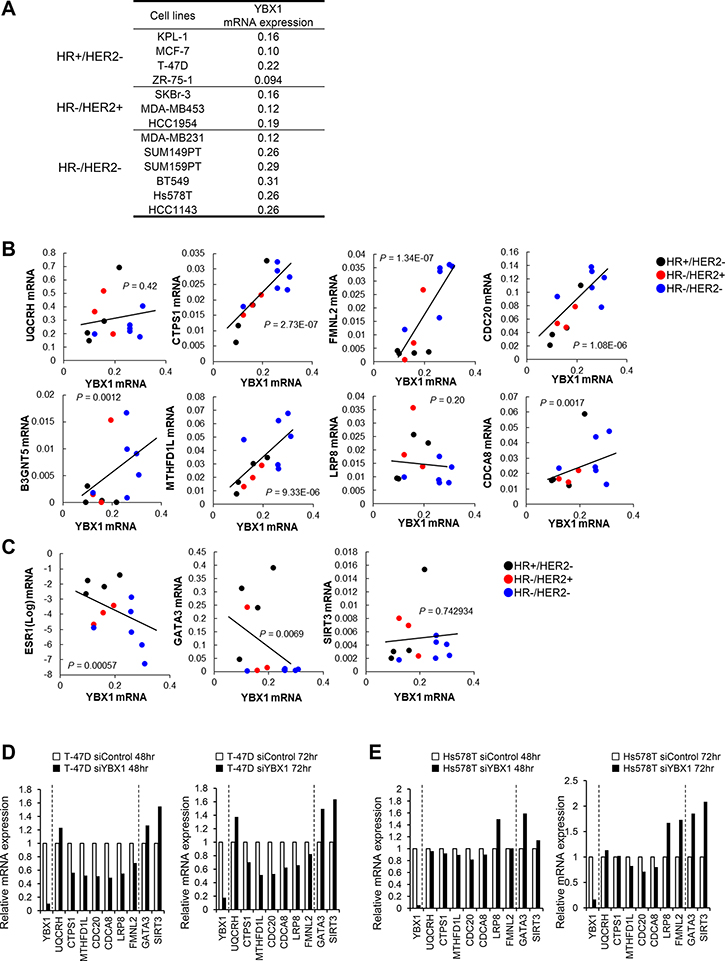 The expression of YBX1 and its correlated genes predicts recurrence susceptibility 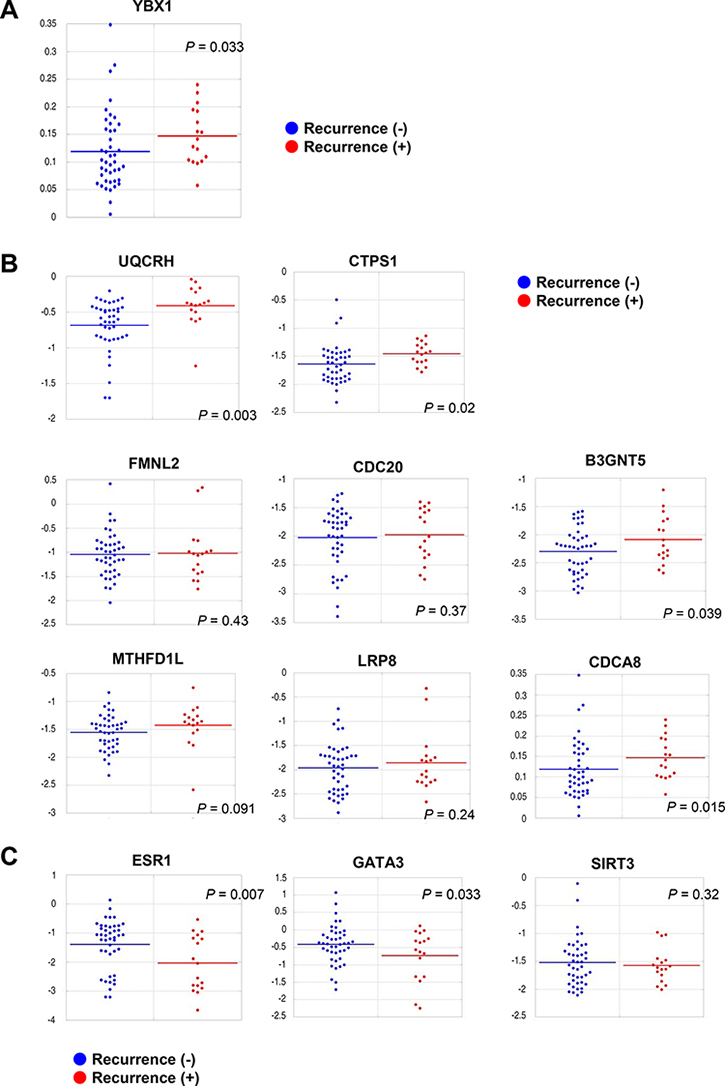 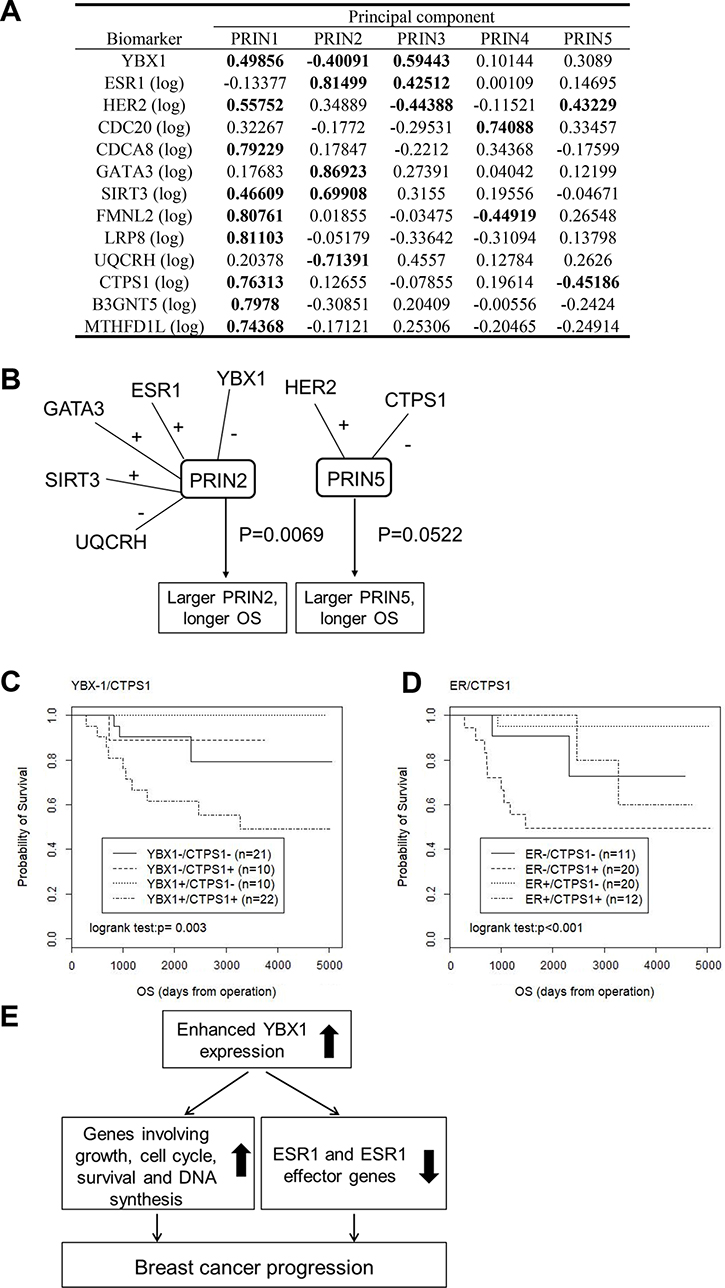 ER-targeted antiestrogens and other endocrine therapeutic drugs have greatly contributed to the improvement of breast cancer therapies [3, 4]. However, one serious problem is the emergence of tumors resistant to antiestrogen drugs during the treatment of ER-positive breast cancer patients. Our previous studies demonstrated a significant and reciprocal correlation between YBX1 and ER in breast cancers [21, 26], and showed that the enhanced expression of YBX1 markedly downregulates the expression of ESR1 and induces acquired resistance to antiestrogen therapeutics [26]. In the present study, more than 60% of the genes that were positively correlated with YBX1 were also negatively correlated with ESR1 (Figure 1E). Therefore, the enhanced expression of YBX1 is often reciprocally accompanied by the reduced expression of ER-dependent genes, which likely promotes breast cancer progression by driving ER-independent cell growth and survival (Figure 5E). Furthermore, we found that patients with higher expression of YBX1 showed poor outcome in ER-positive patients treated with anti-estrogen therapy (Supplementary Figure 3).

Oncotype DX and Mammaprint are frequently used in clinical practice for deciding the suitability of adjuvant chemotherapy for patients with ER-positive and node-negative breast cancer [37, 38]. Oncotype DX and Mammaprint involve reverse transcription polymerase chain reactions for the expression of 21 and 70 genes, respectively, using RNA derived from breast tumor tissues. ER-positive early-stage breast cancer patients can be classified with statistical significance into low- and high-risk groups by these assays. However, in those assays, more than 20 genes are analyzed, and the outcomes of ER-negative breast cancer cannot be predicted. In the present study, we demonstrated that patients with tumors expressing higher YBX1 mRNA levels experienced recurrence more often than those with lower mRNA levels (Figure 4A). Genes that were positively correlated with YBX1 showed a higher expression in recurrent tumors than in nonrecurrent tumors (Figure 4B). In contrast, two genes that were negatively correlated with YBX1 showed lower expression levels in recurrent tumors than in nonrecurrent tumors (Figure 4C). Furthermore, the enhanced expression levels of YBX1 and its correlated gene CTPS1 were able to predict poor outcomes of breast cancer (Figure 5C). Determining the expression levels of YBX1 and its correlated genes can therefore aid in the identification of patients with a high risk of recurrence, and YBX1 and its correlated genes may be useful biomarkers for the precise prediction of breast cancer patients with a high risk of recurrence.

Our and other research groups previously reported that phosphorylation of YBX1 by various kinases including AKT, S6K and RSK through receptor tyrosine kinase and integrin linked kinase induces nuclear translocation of YBX1 in close context with transcriptional activation of various genes including drug resistance and tumor growth related genes [39–42]. Development of therapeutic drugs by targeting YBX1 activation process could contribute to overcome breast cancer through inhibiting expression of predictive genes in present study.

Our present study indicates that the expression of YBX1 and its correlated genes could be used to predict not only poor outcomes but also resistance to endocrine therapeutics and chemotherapeutics in patients with breast cancer. Further follow-up studies in a larger number of patients would be required to confirm our present findings. Targeting YBX1 is expected to help further improve the utility of precision medicine for breast cancer.

The siRNA corresponding to the nucleotide sequence of YBX1 (siYBX1;5′-GGUUCCCACCUUACUACAU-3′) was purchased from QIAGEN Inc. (Valencia, CA, USA). Cells were transfected with siRNA duplexes using Lipofectamine RNAiMAX and Opti-MEM (Invitrogen) according to the manufacturer’s recommendations.

Breast cancer tissue specimens were obtained from 64 Japanese patients who underwent surgery without neoadjuvant systemic therapy at the Department of Surgery and Science, Kyushu University Hospital, between 2004 and 2014. The study was approved by the institutional review board of the university (30–40). Immediately after surgery, the specimens for extraction of the total RNA were placed in liquid nitrogen and stored at –80°C. The clinical data were obtained from the patients’ medical records. Endocrine therapy consisted of an aromatase inhibitor, either tamoxifen or toremifene for postmenopausal women, and an LH-RH agonist for premenopausal women. Chemotherapy regimens, including epirubicin and cyclophosphamide, 5-fluorouracil (5-FU), cyclophosphamide, methotrexate and 5-FU and taxanes, were administered based on the clinicopathological findings. The median follow-up was 2678 days. An overview of the clinical information regarding the patients’ age, sex, pathological diagnosis of the primary tumor, status of recurrence, stage, adjuvant therapy, and immunohistochemistry scores of ER, PGR, and HER2 are presented in Supplementary Table 5. To avoid confusion with the TCGA dataset, we have referred to these data as the Kyusyu University dataset in this paper.

Total RNA was isolated from human breast tumor tissue using ISOGEN (Nippon Gene Co., Ltd., Tokyo, Japan) according to the manufacturer’s instructions. The RNA concentration was assessed by spectrophotometry at 260 nm. qRT-PCR was performed using the Real-Time PCR system 7300 (Applied Biosystems, Foster City, CA, USA). In these analyses, the average expression levels of genes correlated with YBX1 were calculated, and the patients were then classified into high- and low-mRNA expression groups using the average as a cut-off point. Survival curves were plotted using the Kaplan-Meier method and compared using the log-rank test or Wilcoxon’s test. Survival data were evaluated using a multivariate Cox proportional hazards model. Genes were evaluated as having either a poor prognostic ability (P < 0.05) or a good prognostic ability (P < 0.05).

In this manuscript, we used two clinical datasets. The first dataset was from a cohort of 825 invasive breast cancer patients obtained from TCGA (the cBioPortal for Cancer Genomics; http://www.cbioportal.org). Using Spearman’s rank correlation coefficient, we confirmed the negative association between ESR1 and YBX1. In addition, by ranking genes in order of Spearman’s rank correlation coefficients for the associations between YBX1 and those genes (Figure 1A and 1B), the importance of the association between ESR1 and YBX1 was investigated. The associations between the expression levels of YBX1 and its correlated genes were assessed using χ2 tests. The second dataset was the Kyushu University dataset, the details of which are described in the patient information section above. Using these data, we examined the associations among the mRNA levels of 13 biomarkers and their influence on overall survival, which was defined as the duration from surgery to death due to any cause and could be right-censored at the date of last follow-up. To this end, we employed a principal component Cox regression analysis. To avoid biases due to influential observations, we assessed the skewness of the mRNA levels of each biomarker, and the mRNA levels of biomarkers other than YBX1 were log-transformed. Regarding the principal components as underlying independent mechanisms behind the 13 biomarkers (possibly pathways), we tried to speculate about the underlying mechanism in breast cancer patients. Using principal component Cox regression, the associations between the underlying mechanisms and prognosis were investigated. To simplify interpretation, we focused on the principal components attaining an 80% cumulative contribution ratio, which was interpreted as 80% variation of the 13 biomarkers being explained by these principal components.

TS, ET, KW, YMurakami, MK and MO conceived the study design and analytical concept. SH performed statistical analyses and drafted the manuscript. ET, SH and MT contributed to the interpretation of results and the critical revision of the manuscript. TS, KW and JI designed and performed cell culture experiments. ET, NY, EO and YMaehara contributed to the acquisition of patient information and pathology data.