Purpose: The aim of our retrospective study was to determine the time to progression to castration-resistant prostate cancer (CRPC) in prostate cancer patients who undergo combined androgen blockade (CAB), as well as their prognoses.

Materials and Methods: We examined the overall survival (OS) and disease-specific survival rates, as well as the time to CRPC development, in 387 patients who were treated with CAB for prostate cancer. The disease-specific survival rate and time to CRPC were stratified by prostate-specific antigen (PSA) levels, Gleason score (GS), and presence of metastasis at diagnosis. We designated high-risk patients as those satisfying at least two of the following three criteria: extent of disease of bone metastasis grade ≥2, presence of metastasis at diagnosis, and a GS ≥8.

Since Huggins first reported that surgical castration is an effective treatment for advanced prostate cancer [1], hormonal therapy has become an established intervention for previously untreated patients with this disease. In 1982, Labrie et al. indicated the need for anti-androgen drug administration concomitant with surgical or medical castration [2]. Since then, androgen deprivation therapy (ADT) and combined androgen blockade (CAB) have been commonly used for the treatment of locally advanced or metastatic prostate cancer. CAB was not found to be superior to ADT monotherapy in Western countries [3]; however, controlled trials in Japan found that CAB led to significantly longer overall survival (OS) than ADT monotherapy (hazard ratio [HR]: 0.78) in patients with stages C and D1 disease, although not in those with stage D2 disease [4, 5]. As a result, CAB is frequently administered to Japanese prostate cancer patients [6]. In Western countries, the Systemic Therapy in Advancing or Metastatic Prostate Cancer: Evaluation of Drug Efficacy (STAMPEDE) trial found that the failure-free survival in patients receiving ADT monotherapy was only 11 months [7]. Moreover, OS following ADT monotherapy was 24 months among patients with prostate cancer who had bone metastasis at initial diagnosis and 16 months among those who had visceral metastasis; the median OS of those who had both types of metastasis was 14 months [8]. Since these data indicate that ADT is not sufficiently effective for patients with metastatic prostate cancer, new treatment methods have been explored. Some studies showed that docetaxel or abiraterone in combination with initial hormonal therapy was more effective for high-risk prostate cancer patients than ADT monotherapy [9–12]. In these studies, however, ADT monotherapy was used in all the control groups, whereas in Japan, CAB is often used as the initial hormonal therapy. Therefore, it remains unclear whether ADT combined with docetaxel or abiraterone is beneficial for Japanese patients.

Few studies have investigated the time to progression to castration-resistant prostate cancer (CRPC) following the initiation of hormonal therapy. In the ‘Chemo-Hormonal Therapy versus Androgen Ablation Randomized Trial for Extensive Disease in Prostate Cancer’ (CHAARTED) trial [9], Sweeny et al. found that the median time to biochemical, symptomatic, or radiographic progression was 11.7 months in patients receiving ADT monotherapy. Hinotsu et al. reported clinically acceptable progression-free survival and OS in prostate cancer patients treated with ADT [13]. However, they did not investigate the time to transition from hormone-naive prostate cancer to CRPC.

Table 1 summarizes the patients’ characteristics. The 10-year and 15-year OS rates were 74.0% and 50.4%, respectively (median: not reached). Forty-eight patients died of any cause during the follow-up period. Furthermore, the 10-year and the 15-year disease-specific survival rates were both 86.8% (median: not reached). Twenty-one patients died during the follow-up period due to prostate cancer.

Disease-specific survival was stratified by the prostate-specific antigen (PSA) level at diagnosis (<20 vs. ≥20 ng/mL), Gleason score (GS) (≤7 vs. ≥8), and the presence of metastatic foci (Figure 1). Disease-specific survival was significantly shorter among patients with initial PSA ≥20 ng/mL, those with a GS ≥8, and those with metastasis at initial diagnosis. Multivariate analysis revealed that the presence of metastasis at initial diagnosis was an independent negative prognostic factor (Table 2). 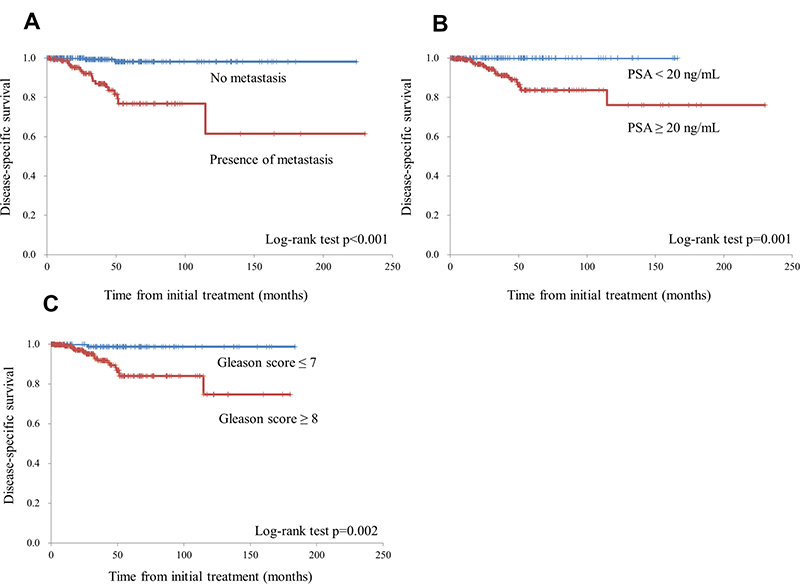 Table 2: Cox proportional stepwise multivariate analysis for the association between the variables and disease-specific survival

A total of 105 of the 387 patients progressed to CRPC; the median time to CRPC development was 140.7 months (Figure 2). The time to CRPC development was stratified by PSA levels, GS, and the presence of metastatic foci as described above. The time to CRPC was significantly shorter in patients with PSA ≥20 ng/mL, those with a GS ≥8, and those with metastasis at initial diagnosis (Figure 3); all these variables were found to be independent prognostic factors on multivariate analysis (Table 3). 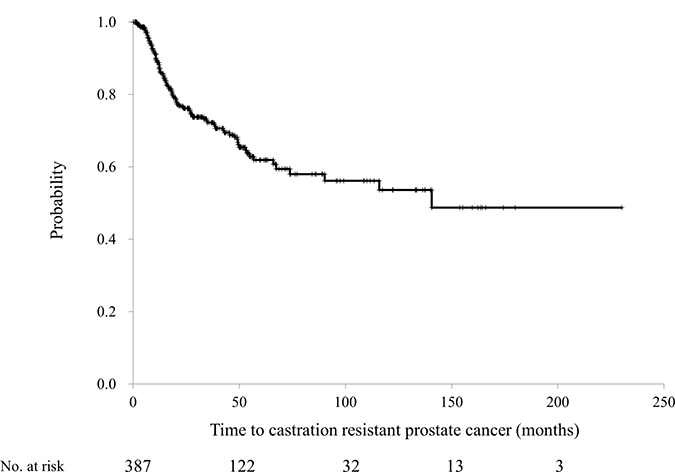 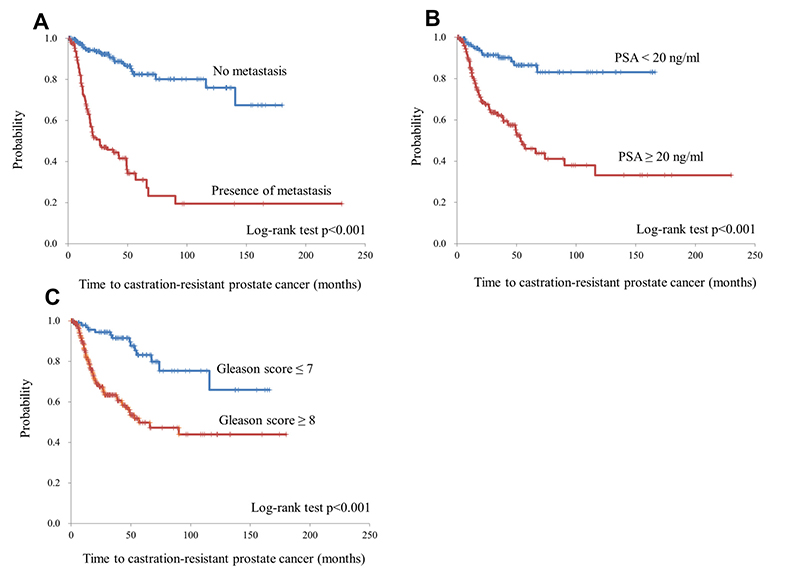 Figure 3: The time to developing castration-resistant prostate cancer was stratified by the presence of metastatic foci (A), prostate-specific antigen (PSA) levels at diagnosis (<20 ng/mL vs. ≥20 ng/mL) (B), and Gleason score (≤7 vs. ≥8) (C).

Table 3: Cox proportional stepwise multivariate analysis for the association between the variables and time to CRPC 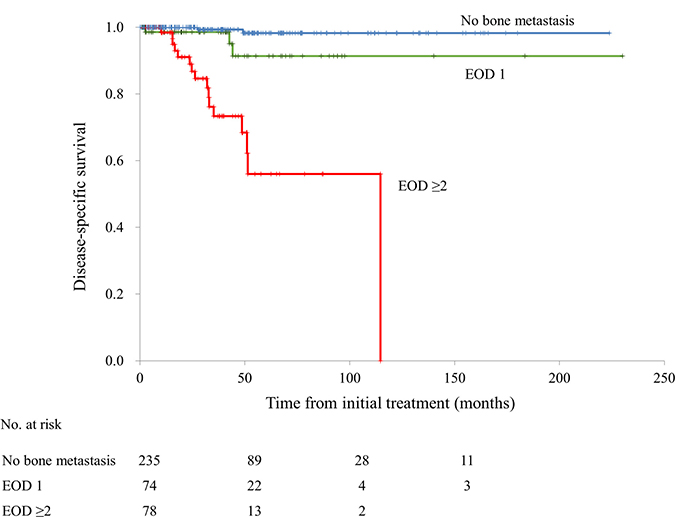 Figure 4: The disease-specific survival rate classified by the extent of disease (EOD) grade (0, 1, or ≥2). 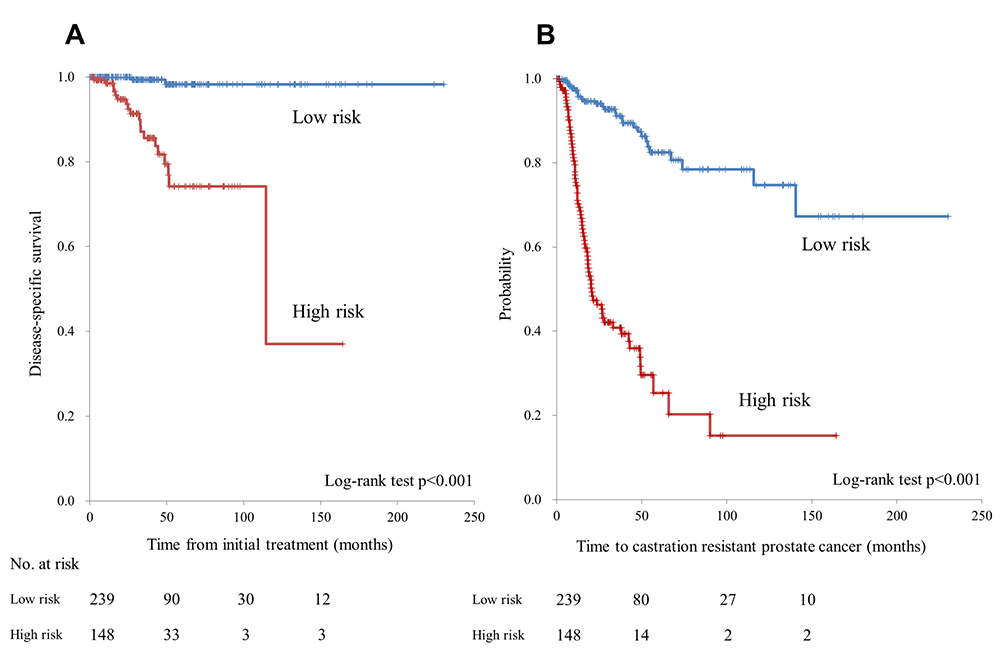 To our knowledge, ours is the first study to determine the time to CRPC development in patients who underwent CAB as the initial hormonal therapy for prostate cancer. Overall, the effectiveness of CAB was long-lasting (140 months), but varied markedly according to various risk factors.

We found that metastasis at initial diagnosis was an independent risk factor of disease-specific survival. Moreover, patients with a GS ≥8 had poorer prognoses than those with a GS ≤7. These findings were similar to those in a controlled trial conducted in Japan to compare CAB and castration monotherapy [5], and supports the possibility that CAB may not be as effective for patients with metastases discovered at initial diagnosis.

Analyses such as ours usually investigate OS; however, we used disease-specific survival because our patients were of older age, with a median age of 77 years, and the death rate from other causes was high (56%). Furthermore, due to the relatively high survival rates, these results should be interpreted with caution. In fact, the median OS was long even in the high-risk patient group (114 months). However, this may partly be because a relatively large number of high-risk patients were lost to follow-up. It should also be noted that the data from high-risk patients were immature because disease-specific death occurred less often. However, since it has been reported that a longer time to CRPC development may correlate with improved OS [17], a longer follow-up period is required.

In summary, the time to CRPC development in patients who underwent CAB as initial therapy and who had metastasis at initial diagnosis was short, as it was for high-risk patients as defined by our criteria. We conclude that CAB treatment is not sufficiently effective for such patients. While the effectiveness of new hormonal drugs to treat CRPC is becoming increasingly evident [18, 19], it remains unknown whether using these drugs for untreated metastatic prostate cancer at an early stage can prolong OS compared to their use at a later stage. Thus, a future prospective study is warranted in this regard.

A total of 387 patients who were pathologically diagnosed with adenocarcinoma of the prostate at the Osaka City University Hospital and the Bell Land General Hospital between May 2007 and December 2017 (a 10-year period), were judged not to be candidates for local treatment, and consequently underwent combination therapy as first-line treatment were enrolled in our study. These therapies included gonadotropin-releasing hormone agonists (3.75 mg leuprolide acetate or 3.6 mg goserelin acetate every 4 weeks or 11.25 mg leuprolide acetate or 10.8 mg goserelin acetate every 12 weeks) or gonadotropin-releasing hormone antagonists (initial dose of 240 mg and maintenance dose of 80 mg of degarelix every 4 weeks) as well as anti-androgen drugs (80 mg of bicalutamide orally once a day or 125 mg of flutamide orally 3 times a day) (CAB). Degarelix was discontinued due to adverse events, and a gonadotropin-releasing hormone agonist (leuprorelin acetate or goserelin acetate) was used for maintenance therapy [20]. We examined OS, disease-specific survival, and time to CRPC development in these patients. Disease-specific survival and time to CRPC were stratified by PSA levels at diagnosis (<20 ng/mL vs. ≥20 ng/mL), GS (≤7 or ≥8), and the presence of metastatic foci before performing comparative analyses.

Furthermore, we focused on “high-risk” prostate cancer patients, who were defined as those satisfying two of the following three criteria: EOD of bone metastasis grade ≥2; presence of metastasis at diagnosis (visceral and/or bone metastasis); and a GS ≥8. Patients not meeting at least two of these criteria were considered “low-risk.” On the basis of the number or extent of metastases, patients were divided into five EOD grades based on bone scintigraphy scans as follows: 0, normal or abnormal due to benign bone disease; 1, number of bony metastases less than 6, each of which is less than 50% the size of a vertebral body (one lesion about the size of a vertebral body would be counted as two lesions); 2, number of bone metastases between 6 and 20, size of lesions as described above; 3, number of metastases more than 20 but less than a “super scan”; and 4, “super scan” or its equivalent, i.e., metastasis to more than 75% of the ribs, vertebrae, and pelvic bones [14].

Clinical and histological staging were based on the National Comprehensive Cancer Network Clinical Practice Guidelines in Oncology (version 3, 2016). The definition of CRPC was based on meeting the following European Association of Urology Guidelines criteria: serum testosterone level <50 ng/dL plus 1) successive increases in PSA level during three consecutive measurements obtained ≥1 week apart, an increase of ≥25% on two PSA readings, and a PSA level ≥2.0 ng/mL; or 2) the exacerbation of an existing lesion or development of a new lesion on imaging. OS, disease-specific survival, and the time to CRPC development were estimated using the Kaplan–Meier method, with differences determined using the log-rank test. Cox proportional stepwise multivariate analysis was used to evaluate associations of PSA, GS, and presence of metastatic lesions at initial diagnosis with cause-specific survival and time to CRPC development. A two-sided p-value of < 0.05 was considered statistically significant. All statistical analyses were performed using Microsoft Excel® (Microsoft, Redmond, WA, USA). Permission to access the database for a review of the medical records of the patients was obtained from the local research ethics committee at Osaka City University (approval number 4011).

We would like to thank Ms. Ayako Akagi for data collection, as well as Mr. Maehira (https://www.igaku-honyaku.jp/) and Editage (https://www.editage.jp) for English language editing.

1. Huggins C, Hodges CV. Studies on prostatic cancer. I. The effect of castration, of estrogen and androgen injection on serum phosphatases in metastatic carcinoma of the prostate. Cancer Res. 1941; 1:293–97.