Objective: The histological tumor grade is a strong predictor of nodal metastasis in endometrial cancer; as such, an accurate pre- or intraoperative diagnosis is important for performing lymphadenectomy.

Methods: Ninety-one patients with endometrioid endometrial cancer were imaged on DW-MRI with the apparent diffusion coefficient (ADC) calculated and a frozen section (FS) diagnosis made before and at hysterectomy. The diagnostic accuracy for predicting the tumor grade for diffusion weighted magnetic resonance inaging (DW-MRI) and the FS diagnosis compared to the ultimate histologic status was analyzed.

Conclusion: A FS diagnosis is more suitable for predicting high-grade tumors than DW-MRI; however, physicians should pay close attention to tumors with low ADC values on preoperative DW-MRI.

Magnetic resonance imaging (MRI) has been shown to be an accurate imaging technique for the preoperative assessment of endometrial cancer and for evaluating the depth of myometrial invasion [11]. Diffusion-weighted MRI (DW-MRI) is a useful imaging technique for evaluating the Brownian motion of water in tissues. In biological tissues, this motion is restricted by interactions with cell membranes and macromolecules on a microscopic level. Increased tissue cellularity, as seen in tumors, restricts Brownian motion, which can be quantified by the calculation of the apparent diffusion coefficient (ADC).

The purpose of this study was to determine if there is a correlation between the histological tumor grade and ADC value and to evaluate the diagnostic accuracy of the tumor grade for preoperative DW-MRI and intraoperative frozen sections (FSs) in endometrioid endometrial cancer patients.

Characteristics of the study participants in test and validation set

The ADC values for each tumor grade in the test set 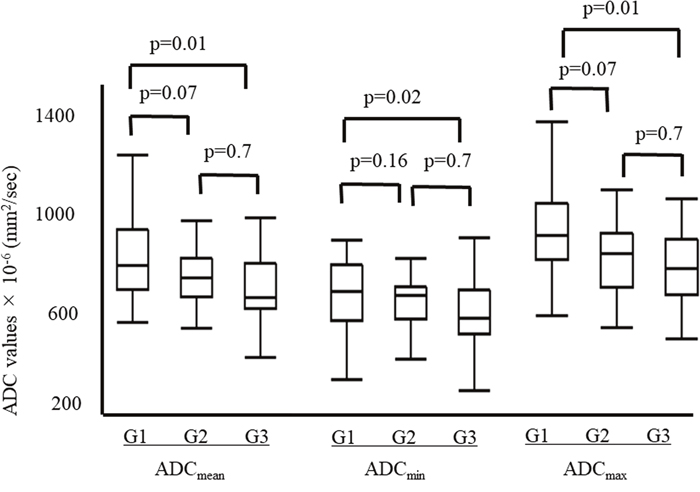 The diagnostic accuracy of the ADC values, preoperative biopsy and intraoperative FSs in predicting high-grade tumors in the test set 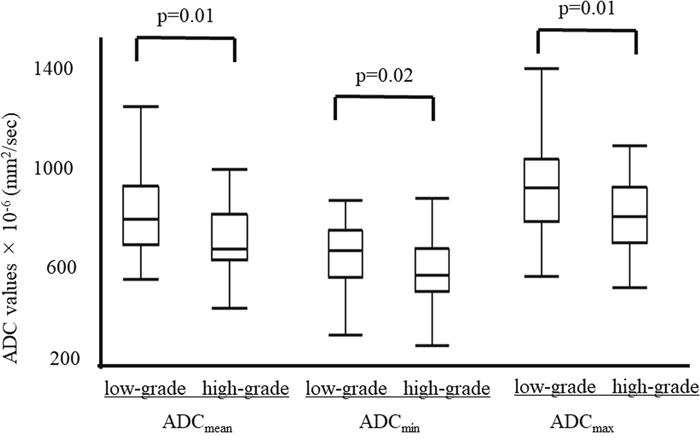 Table 3: The correlation of the tumor grade with the preoperative MRI parameters and the final paraffin section findings in the validation set

In contrast, it has been reported that intraoperative FS diagnoses tend to agree with the final pathology [11, 18, 19]. Karabagli et al. reported that the agreement for tumor grade between FSs and PSs was 89.9%, with a kappa value of 0.84 [18]. Stephan et al. reported that the histological grade evaluation based on an FS had 98% sensitivity and 53% specificity compared to PSs. There were no discrepancies in the FS assessment of high-grade tumors, with all confirmed by PSs [19]. We previously reported on the histological agreement between FSs and PSs in endometrial cancer. When grade 3 endometrioid carcinoma, serous carcinoma, clear cell carcinoma and carcinosarcoma were considered high-grade tumors, the grade evaluation at the time of obtaining an FS had 70.2% sensitivity and 99.0% specificity, with a kappa value of 0.75 [11].

The present study is associated with three major limitations that may reduce its value. First, the sample size was quite small for assessing the apparent ADC values. Second, the same pathologists performed both the FS and PS evaluations; this may have caused some bias in favor of the FS diagnosis. Third, the ADC values differed among tumor sites. Fourth, the fact that the whole tumor was not defined and that the ADCmean, ADCmin and ADCmax were reported might have influenced the outcome. As such, our results must be confirmed in further studies.

Between September 2014 and July 2018, a total of 109 patients with a diagnosis based on preoperative endometrial curettage, preoperative MRI and intraoperative FSs underwent hysterectomy for endometrial cancer at Osaka Medical College in Japan. Patients who met the following criteria were eligible for inclusion in the study: (1) underwent preoperative DW-MRI with ADC map at First Towakai hospital by the same radiologist with the same imaging systems; (2) underwent laparoscopic or abdominal hysterectomy with bilateral salpingo-oophorectomy at Osaka Medical College; (3) received an intraoperative FS diagnosis; (4) did not receive any treatment, including chemotherapy and radiotherapy, before surgery. Ninety-one patients who were treated between September 2014 and September 2017 were assigned to the test set and 18 patients treated between October 2017 and July 2018 were assigned to the validation set.

After obtaining Institutional Review Board approval, the medical records were retrospectively reviewed. The ADC values on DW-MRI were evaluated in each tumor grade and the final determinations were made based on the findings of evaluations using paraffin sections (PSs). The histological grades determined based on preoperative DW-MRI or FS findings and on PS were also assessed.

All pelvic MR images were obtained using a 1.5-T MR imaging unit (Philips Healthcare, Best, The Netherlands) within a month before surgery. Routine pelvic MRI scans were acquired as Supplementary Table 1. Axial oblique scans were obtained perpendicular to the endometrial cavity, resulting in a short-axis view. Dynamic contrast material-enhanced (DCE) imaging of the pelvis was performed after the administration of 0.1 mmol/kg of body weight gadolinium chelate (Gadovist; Bayer, Mississauga, Ontario, Canada) using 3-dimensional gradient-echo T1 weighted SPAIR with the parameters in Supplementary Table 1. Images were acquired at multiple phases of contrast medium enhancement in both the sagittal and axial oblique planes at 30, 60, 90 and 180 seconds.

ADC maps were generated on the scanner console using axial oblique DW b = 1000 and b = 0 images. For each patient, a region of interest (ROI: 11.9-59.3 mm2; mean 49.2 ± 16.9 mm2) was manually defined by two radiologists (with 30 years of experience in gynecological MRI) to be as large as possible (max 59.3 mm2) within the smallest ADC area of endometrial lesion visualized on DW imaging (b = 0). Care was taken to avoid contamination of this ROI by adjacent normal endometrium or myometrium or by areas of fluid/necrosis within the endometrial cavity (Figure 4). The ROI was determined after discussion between two radiologists. The mean, minimum and maximum ADC values for each tumor grade were compared using a one-way analysis of variance (ANOVA). A ROC curve was generated to evaluate the diagnostic accuracy with the tumor grade as a predictor for DWI. The cut-off point for the ROC was predetermined by JMP software in order to automatically minimize the mathematical distance between the ROC curve and the ideal point, as a method to minimize any misclassification of the tumor grade. The ADCmean, ADCmin and ADCmax (mm2/sec) were calculated using the software program for the Philips workstation (Extended MR Workspace; Philips Healthcare, Best, The Netherlands).

We performed the FS analysis using the following procedure: After hysterectomy, the uterine anterior wall was sectioned through the cervical canal and the endometrial cavity longitudinally and then sectioned horizontally from the fundus to the ostium of the fallopian tube. Gynecologists assessed the deepest point of invasion and oversaw the selection of sections for freezing. One full-thickness section of an endometrial tumor, grossly assessed to be deepest point of invasion, with underlying myometrium and serosa was frozen in Optimal Cutting Temperature media and sectioned on a cryostat into 5-μm slices. Five different levels were cut, separated by approximately 25-50 μm, which were then stained with rapid hematoxylin and eosin staining for microscopy.

Both the microscopic depth of myometrial invasion as well as the tumor subtype and grade were determined on the single frozen section. Occasionally, an additional section was frozen when the first slides showed equivocal findings or the sections were of a particularly poor quality. The microscopic diagnosis was performed by two pathologists. In most cases, the frozen section remnant was then submitted for permanent histology, and several additional sections of tumor were paraffin-embedded and used for the final microscopic analysis. The same pathologists verified the final pathology report. When the pathologists made a different diagnosis, discussions were held until a consensus was reached.

All of the statistical analyses were performed using the JMP software package (version. 13.1.0; SAS institution Japan, Tokyo, Japan). The diagnostic agreement between the DWI, preoperative biopsy or FS findings and the final pathology was calculated using kappa statistics. Continuous variables are expressed as the mean ± standard deviation (SD). The Mann-Whitney U-test was used to compare continuous variables between the two groups. Tukey’s honestly significant difference (HSD) was used for making multiple comparisons in datasets with continuous variables containing more than two groups. Fisher’s exact test was used to compare frequencies. P values of <0.05 were considered to indicate statistical significance.

The authors have received no funding for this article.