Epidermal growth factor receptor (EGFR)-tyrosine kinase inhibitor (TKI) is the standard of care for patients with EGFR-mutant advanced/metastatic non-small cell lung cancer (NSCLC). The progression-free survival (PFS) is approximately one year, and acquired resistance (AR) is mostly inevitable [1]. T790M point mutation in exon 20 is the major mechanism of AR, accounting for half of all AR mechanisms [2–4]. Third-generation (3G) EGFR-TKIs are markedly effective and safe for T790M-positive patients [5, 6]. Among 3G EGFR-TKIs, osimertinib is the only clinically available agent now. Unfortunately at present, osimertinib is only indicated in T790M-positive patients, thus T790M-negative patients cannot receive clinical benefit from osimertinib. To confer its clinical benefit to more patients, a novel therapy to induce positive conversion in T790M-negative patients may be possible.

We have reported results of our ABC-study evaluating the efficacy and safety of Afatinib plus Bevacizumab Combination (ABC) therapy after AR to EGFR-TKIs [7]. Interestingly, in some patients after completion of this study, T790M status had changed from negative to positive after ABC-therapy. According to this phenomena, we hypothesized that ABC-therapy could induce positive conversion of T790M in previously-negative patients. The aim of this study was to investigate T790M status from rebiopsy results after ABC-therapy in patients who had been enrolled in ABC-study.

We reviewed 32 eligible patients from our ABC-study. Patient characteristics are shown in Table 1. The median age was 66 (range, 48–86) years. Twenty-one (66%) patients were female. The frequencies of sensitive EGFR mutation subtypes were 20 (63%) Del-19, 11 (34%) L858R, and 1 (3%) L861Q. The response rate and disease control rate of afatinib plus bevacizumab were 18.8% and 90.7%, respectively. Median PFS was 6.3 months [7]. Eighteen (56%) patients underwent rebiopsy after ABC-therapy. Four patients received chemotherapies between progressive disease (PD) on ABC-therapy and rebiopsy, and remaining 14 patients were rebiopsied without chemotherapies after PD on ABC-therapy. Sensitive EGFR mutation status did not change before and after ABC-therapy in all studied cases.

T790M status before and after afatinib plus bevacizumab

Figure 1: T790M status before and after afatinib plus bevacizumab.

Seven of 8 cases where T790M status changed from negative to positive after ABC-therapy underwent osimertinib therapy. The response rate and disease control rate were 86% and 100%, respectively. The median time to treatment failure and overall survival were 12.2 (95% CI, 3.0-undeterminable) months (Figure 2) and not reached, respectively. There were no adverse events ≥grade 3, nor any treatment-related deaths. 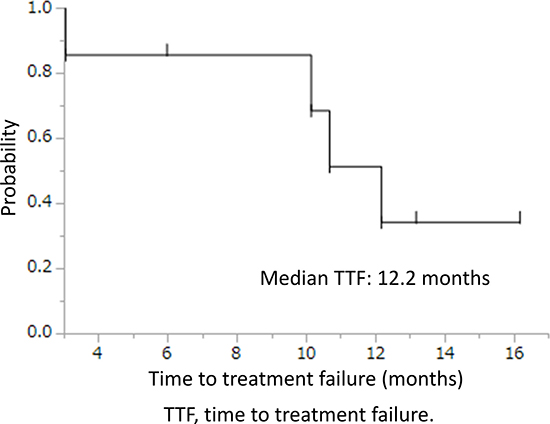 We herein describe a representative case of T790M-positive conversion. The patient was 73 years-old male with EGFR-mutant (L858R) NSCLC. He received erlotinib as the first-line therapy for 1 year. After progression, rebiopsy was performed using bronchoscopy. T790M was negative, then ABC-therapy and carboplatin plus pemetrexed were administered as second- and third-line chemotherapies. After further progression, rebiopsy was carried out again to the same lesion and procedure. T790M was converted to positive, and osimertinib was initiated. Partial response was confirmed, and TTF was 12.2 months (Figure 3). 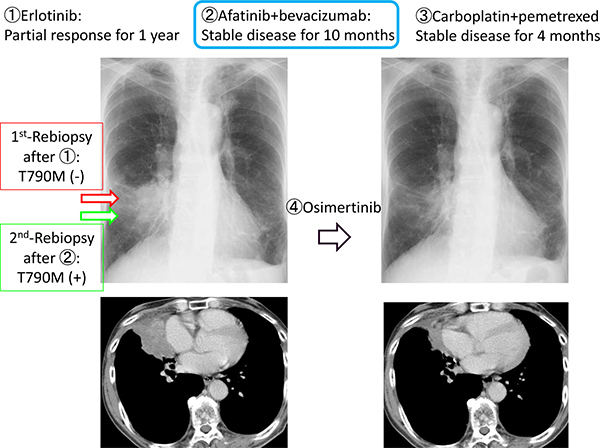 We assumed three mechanisms which caused this phenomenon. First is our hypothesis: clonal selection induced by ABC-therapy. Afatinib plus bevacizumab exerts a strong synergistic effect against cancer cells after acquired resistance to EGFR-TKIs [12]. Afatinib also has high sensitivity to cancer cells harboring uncommon/minor EGFR mutations and HER2-4 [13, 14]. Erlotinib plus bevacizumab was reported to be potentially effective against MET-amplified cancer cells after AR in preclinical study [15]. This data might imply similar sensitivity of afatinib plus bevacizumab to MET-amplified cancer cells. ABC-therapy could eliminate heterogenous clones other than T790M-positive clones, and could purify T790M-positive clones in heterogenous tumors (Figure 4). Second, spatiotemporal heterogeneity of T790M could affect this phenomenon. We previously reported T790M spatiotemporal heterogeneity suggested by results of multiple rebiopsy [11]. In patient #3, rebiopsy was done to lung before ABC-therapy, and to pleural effusion after ABC-therapy. This case implies spatial T790M heterogeneity between lung and pleural effusion. Some cases might have exhibited a temporal T790M heterogeneity. Before ABC-therapy, selective pressure from prior EGFR-TKIs might have been insufficient to change T790M-negative results. After ABC-therapy, selective pressure might have increased enough and might have induced T790M-positive results [11]. This T790M temporal heterogeneity is due to TKI selective pressure, which may suggest similar phenomenon to our hypothesis of clonal selection. Third, is a possible differential result by different procedural manner. In patient #21, rebiopsy was performed using cobas before ABC-therapy, and using PNA-LNA PCR clamp after ABC-therapy. Sensitivity of cobas and PNA-LNA PCR clamp are considered as 5% and 1%, respectively [5, 16]. That of MPB-QP is regarded as 1% [17]. In some cases with T790M-positive conversion, PNA-LNA PCR clamp was used before ABC-therapy, and MPB-QP after ABC-therapy. Although sensitivities between them are similar, differential procedual manners might have affected T790M-positivity. 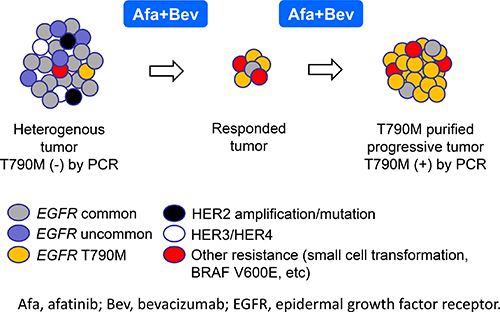 In seven cases where T790M status changed from negative to positive after ABC-therapy, the response rate and disease control rate of osimertinib were 86% and 100%, respectively. The median TTF was 12.2 months. These results were similar or slightly better than historical results of osimertinib for pretreated T790M-positive NSCLC [5, 6]. Our hypothesized clonal selection might have affected these favorable results. T790M-purified cancer after ABC-therapy could have responded well to osimertinib. Notably, Sequist et al. have reported longer TTF of osimertinib after afatinib than after gefitinib [18]. They also hypothesize clonal selection by afatinib affected longer TTF. Results of their and our studies could complement each other and support our hypothesis of clonal selection.

Our study was retrospective and small sample size, including several limitations. After ABC-therapy, not all patients underwent rebiopsy. Patients who were able to receive rebiopsy had targetable lesions and relatively higher tumor burdens than those without targetable lesions. This could be a selection bias. Tumor response and PFS of osimertinib were evaluated using the RECIST, but durations of CT scans depended on doctors in charge. These variable durations also could be a bias of our study. This could largely affect PFS, thus we adopt TTF as an evaluation of therapeutic duration. We hypothesized clonal selection by ABC-therapy, but resistant mechanisms in T790M-negative samples were not investigated, and tumor heterogeneity was not definitively confirmed, but just speculation. After approval of next generation sequencers in the near future, compound mutations could be examined before and after ABC-therapy, which could confirm the hypothesis of clonal selection.

Afatinib can inhibit both uncommon EGFR mutations and pan-HER signals. If clonal selection is induced by only afatinib monotherapy, the T790M incidence after afatinib would be higher than that after gefitinib or erlotinib. However, Wu SG et al. showed that the T790M incidence after afatinib was 47.6%, similar to gefitinib or erlotinib [19]. Sensitivity to afatinib monotherapy might be insufficient, and additional bevacizumab to afatinib could be necessary to induce clonal selection. However, this basic mechanism is unclear. Actual advantage of and reason to convert T790M by additional bevacizumab are unknown and warrant further investigations.

This study was a retrospective study involving patients after completion of ABC-study: Afatinib plus Bevacizumab Combination after AR to EGFR-TKIs in EGFR-mutant non-small cell lung cancer, a prospective multicenter, single-arm, open-label phase II trial conducted by the HANSHIN Oncology Group to evaluate the clinical efficacy and safety of ABC-therapy after AR in EGFR-mutant NSCLC. ABC-study demanded examination of T790M status before enrollment. Patients of unknown T790M status were ineligible. After primary EGFR-TKI therapy before ABC-therapy, all enrolled patients to ABC-study received rebiopsy. The aims of this study were: first, to examine T790M status before and after ABC-therapy; and second, to evaluate the efficacy of osimertinib in cases converted from T790M-negative to -positive after ABC-therapy. The study was conducted in accordance with the Declaration of Helsinki with the approval of institutional review board.

Osimertinib was prescribed in our clinical practice. The efficacy and safety were evaluated according to the Response Evaluation Criteria in Solid Tumors (RECIST) version 1.1 and the National Cancer Institute Common Terminology Criteria for Adverse Events version 4.0, respectively.

This study had no financial support. The authors appreciate the participating patients and member of the HANSHIN Oncology Group. We thank Ms. Edagawa and Ms. Mizushima for data management and Mr. David Martin for English writing support.