Vitamin D receptor as a marker of prognosis in oesophageal adenocarcinoma: a prospective cohort study

Aims: Vitamin D receptor (VDR) expression has been associated with survival in several cancer sites. This study aims to evaluate the association between VDR expression and prognosis in oesophageal adenocarcinoma patients.

Results: During a median of 2.5 (maximum 9) years of follow-up, 75 patients died. In analysis adjusted for confounders, higher VDR expression was associated with an improved overall survival (HR 0.49 95% CI 0.25–0.96) and disease-specific survival (HR 0.50 95% CI 0.26–0.99), when comparing the highest with the lowest tertile of expression. These associations were strongest in sensitivity analysis restricted to junctional tumours.

Methods: Oesophageal adenocarcinoma specimens and clinical data were collected from 130 patients treated with neo-adjuvant chemotherapy prior to surgical resection at the Northern Ireland Cancer Centre between 2004 and 2012. Tissue microarrays were created and immunohistochemical staining for VDR was performed on triplicate tumour cores from each resection specimen. Cox proportional hazards models were applied to evaluate associations between VDR, according to tertiles of expression, and survival outcomes.

Oesophageal cancer causes 400,000 deaths worldwide each year and ranks as the sixth most common cause of cancer mortality [1]. Neo-adjuvant therapy has somewhat improved prognosis, however 5-year survival rates for this malignancy still only range between 10% and 18% in Western settings [2, 3]. These low figures are partially related to more than 30% of oesophageal cancer patients having metastatic disease at first presentation [2]. Even in those patients with localised disease who have undergone attempted curative surgery, the 5-year survival is still as low as 41% [2]. In addition to early detection initiatives, there is a need to identify actionable, prognostic biomarkers to help predict patient outcome and also to identify novel therapeutic targets.

The vitamin D receptor (VDR) exerts its biological influence by binding with circulating vitamin D, and thereby contributes to the regulation of apoptosis and cell differentiation, and suppression of cancer cell proliferation [4–6]. In-vitro studies within colorectal cancer cell lines have demonstrated that cells with high VDR expression tend to be well differentiated and are biologically favourable, whereas cell lines with low VDR expression demonstrated aggressive features with higher metastatic potential [7]. These findings have been translated in clinical studies which have shown that high VDR expression has been associated with increased survival in colorectal, pancreatic and breast cancer, cutaneous melanoma, urothelial bladder cancer and oesophageal squamous cell carcinoma [8–13].

To date, only one study has investigated the association between VDR expression and oesophageal adenocarcinoma outcomes in 116 patients. In this patient cohort from the University of Rochester, New York, no significant difference in outcome in those patients with high compared to low VDR expression was seen [14].

This study aims to expand on this limited evidence, to investigate the association between VDR expression and prognosis in oesophageal adenocarcinoma patients who have undergone neoadjuvant chemotherapy and surgical resection.

Table 1: Patient demographics and tumour characteristics according to tertiles of maximum VDR expression

bThis analysis included 125 patients as 5 had died due to other causes.

Table 3 outlines sensitivity analysis restricted to junctional tumours. As with the main analysis, higher VDR expression was associated with improved overall survival and cancer-specific survival, and the magnitude of associations were strengthened. Patients with VDR expression in the highest tertile had a significant 56% reduction in all-cause mortality (HR 0.44 95% CI 0.22–0.99), with similar reductions in cancer-specific mortality, although statistical significance was slightly attenuated (HR 0.47 95% CI 0.21–1.02) compared to patients with the lowest VDR expression tumour cores.

bThis analysis included 105 patients as opposed to 110 patients as in the overall survival analysis as 5 had died due to other causes.

Secondary analysis in which all above outcomes were evaluated for median, rather than maximum, VDR expression largely showed similar results that were attenuated in statistical significance (data not shown).

These findings contrast with those from the only other published study to have considered the impact of VDR expression on oesophageal cancer survival. In a study of 116 patients in the USA, no significant difference in overall survival (21 months in high VDR expression versus 20 months in low VDR expression) was demonstrated between groups with high and low VDR expression (p = 0.99) [14]. There are multiple differences in that study’s design compared with ours that may account for the conflicting results. Firstly, in our study, all patients underwent neoadjuvant treatment prior to surgical resection, whilst in the aforementioned study all patients had surgical resection without neo-adjuvant therapy [14]. Limited research is available to explore the impact of neoadjuvant treatment upon VDR expression of the primary tumour, although one small study in 15 patients found those with higher VDR expression were less likely to respond to treatment, indicating a potential interaction [16]. However, the authors accepted that these results could be simply due to chance [16]. Secondly, the methods of scoring and analysing the VDR expression differed in that there was only one sample taken for each patient and there was considered to be a high expression of VDR if 10% or more of cells stained with an intensity score of 2+ or 3+ [14]. This would be the equivalent of an H-score of 20 or 30 in our study to divide patients into high and low expression, whereas our lowest tertile reflected an H-score of less than 120. Our methods also involved scoring three cores rather than one from each tumour specimen, which reduces the likelihood of sampling bias. Thirdly, there may be underlying differences in the population studied (Northern Ireland and the USA) and fourthly, this study used a different antibody to stain the specimens. All of these factors may account somewhat for the difference in findings.

Another interesting feature of previous studies in other cancer sites was that higher VDR expression was more frequently observed in well differentiated tumours compared to poorly differentiated tumours in colorectal cancer, pancreatic adenocarcinoma and cholangiocarcinoma [8, 9, 19]. This corroborates similar findings in a previous study by Trowbridge et al. in tissue from 15 oesophageal adenocarcinoma patients [16]. In our study however, there was no association between tumour grade and VDR expression, and adjustment for grade within our survival analysis did not affect our results.

When we performed sensitivity analysis for junctional tumours only, there was a greater magnitude of association between VDR expression and overall survival and disease-specific survival, although statistical significance was slightly attenuated for the latter. Previous findings suggest that VDR expression only features in oesophageal cells after they have undergone metaplastic transition, but it is unclear if this is a cause-or-effect role [15, 20]. Our findings in the sensitivity analysis may therefore arise due to a difference in VDR expression between tumour sites. This theory is supported by the fact that junctional tumours can arise from oesophageal tissue or gastric tissue and these tissues may differ biologically in both their normal state and pre-malignant state.

Evidence from our study demonstrates for the first time that any association between circulating vitamin D levels and oesophageal adenocarcinoma outcomes, mediated by VDR expression, may be biologically plausible. VDR are activated when they combine with vitamin D3, the active form of vitamin D. This subsequently combines with the retinoid x receptor which can then promote or suppress hallmarks of tumorigenesis [5, 6]. Indeed, a cell-line study has demonstrated that VDR activation regulates apoptosis and cell differentiation, and suppresses tumour proliferation [4]. However, further studies that incorporate assessment of serum 25-hydroxyvitamin D status in addition to tumour VDR expression in patients with oesophageal adenocarcinoma are required to corroborate this hypothesis.

Theoretically, if VDR levels impact on survival and vitamin D activates the VDR, then vitamin D may play a role in the neo-adjuvant treatment phase or even in the chemo-preventative setting [3, 27]. This hypothesis is supported by findings in other cancers with in-vivo studies in colorectal, pancreatic and gastric cancer having shown 1,25-dihydroxyvitamin D3, 25-hydroxyvitamin D3 and vitamin D analogues to decrease cancer cell growth [28–30]. Furthermore, results in animal models have been encouraging as vitamin D3 has been shown to decrease both pre-cancerous and cancerous lesions in gastric cancer in rats [31].

The main limitation of this study is the relatively small sample size, although our cohort size of 130 patients is typical of this relatively rare disease site. All patients had surgically resectable disease, therefore this cohort represents patients with more favourable prognosis, and we cannot deduce if VDR expression impacts upon the outcome in patients with more advanced disease. Future studies should aim to evaluate associations between VDR expression and survival in patients with advanced disease as has been demonstrated for other cancer sites, however given the limited expected survival within this group of patients it may be difficult to detect significant benefits [34].

This study was performed and reported in line with the REMARK guidelines [35].

In this population-representative study, all patients in Northern Ireland who underwent neoadjuvant chemotherapy followed by surgical resection for oesophageal adenocarcinoma between the 1st January 2004 and the 31st December 2012 were included. There were 158 formalin-fixed paraffin embedded (FFPE) oesophageal adenocarcinoma resection specimens collected from the Northern Ireland Cancer Centre. Of these, slides with tumour which could be scored and matched clinical information was available for 137 patients. Seven patients were excluded from further analysis, as two were staged as T0 disease, one had metastatic disease, and tissue microarray (TMA) cores were unable to be scored for VDR expression for four patients, leaving 130 patients for inclusion in our final analysis. Figure 1 summarises the indications for exclusion from this study. 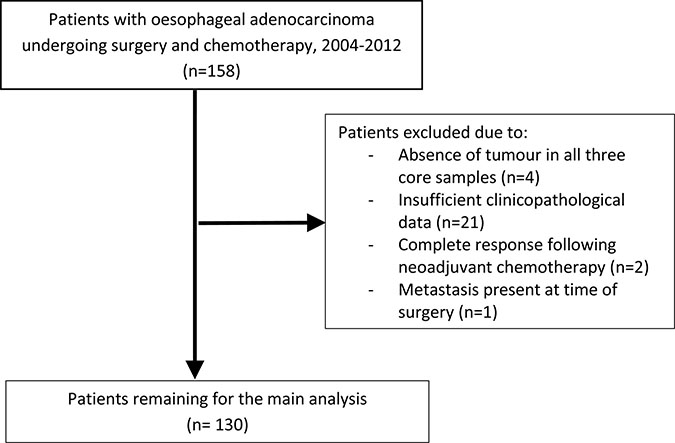 A FFPE tissue block was selected from each resection specimen and three 1mm cores of tumour were embedded in a paraffin block using the Beecher Manual Arrayer®.

Immunohistochemical analysis was performed within the NI-Molecular Pathology Laboratory (NI-MPL) at Queen’s University Belfast, following approval by the Northern Ireland Biobank (study number NIB15-0176). Slides were immunostained on a Ventana BenchMark fully automated immunostainer, with a previously validated rabbit monoclonal VDR antibody (cell signalling-clone number D2K6W: 1/100, pre-treatment CC1 32 minutes, Optiview detection without amplification) to enable VDR expression to be identified and then scanned on an Aperio AT2 scanner, and viewed as digital images on Xplore (PathXL).

Biomarker expression was evaluated by a trainee pathologist (JT) and an independent observer (surgical registrar, SMcC), who were both blinded to clinical data. This process was carried out following the training and guidance of an expert gastrointestinal pathologist (DMcM). The staining intensity from each tissue section was assessed along with the percentage of tumour cells staining positive and a final agreement on discordant results was made. Scoring was based on intensity (0 = no staining, 1 = weak, 2 = moderate and 3 = strong staining observed) and this was multiplied with the percentage of tumour cells staining positive to give an H-score between 0 and 300. Examples of these different grades of staining are demonstrated in Figure 2. Different methods for evaluating the VDR expression are reported in the literature and may contribute to different results. A range of these methods are displayed in Table 4. 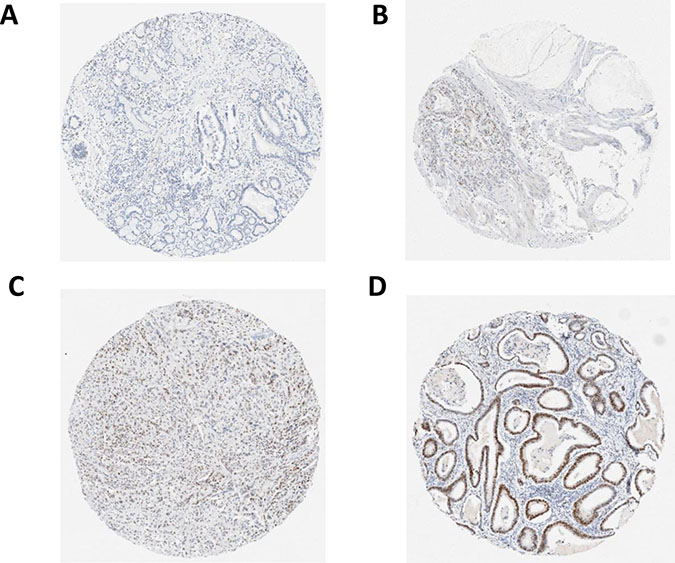 Table 4: Different methods of calculating the VDR expression in other studies

Median and maximum H-scores for VDR expression across the triplicate tumour cores were generated for each patient, to explore if there was an association with outcomes. Following evaluation of histograms, the median and maximum H-scores were used to create groupings of both high/low VDR expression and tertiles of high/medium/low VDR expression, although the distributions in the histograms did appear to favour the latter method. Primary analysis evaluated the distribution based on the maximum H-score (which may be more clinically relevant) from the triplicate cores in TMAs, and median H-scores (which may be less subject to sampling errors) were evaluated in secondary analysis.