Background and Purpose: Complete surgical resection remains the only curative treatment option in locally advanced gastric cancer (GC). Several studies were conducted to prevent local recurrence and to increase the chance of cure. The aim of this study was to summarize our experience in locally advanced GC patients treated with adjuvant chemoradiotherapy (CRT) and to evaluate overall survival (OS), disease-free survival (DFS), toxicity rate and compliance to treatment.

Conclusions: Adjuvant CRT is a feasible strategy in locally advanced GC. It has an acceptable toxicity rate and it is able to increase both DFS and OS.

Complete surgical resection represents the only curative treatment option in locally advanced gastric cancer (GC). Clinical outcomes are still strongly influenced by the high percentage of both local recurrence (LR) and distant metastases rates. Approximately 60% of GC patients presented locally advanced disease at diagnosis. Although a complete tumor resection with negative margins (R0) can be achieved in 40–60% of these cases, about 70–90% of patients will subsequently relapse. An extended lymph node dissection might improve local control rate, but its optimal extent remains unresolved.

In order to reduce LR rate and increase cure rate of GC patients, several studies have tested different treatment strategies after surgery. US Intergroup Study INT-0116 [1] was the first large randomized trial that compared adjuvant chemoradiotherapy (CRT) versus surgery alone in patients with locally advanced disease. This study demonstrated a significant impact on progression free survival (PFS) and overall survival (OS), although mainly the benefit appeared to be derived from a reduction in LR rather than in distant metastases rate.

The aim of this study was to report our data concerning patients with locally advanced GC treated with adjuvant CRT, in order to analyze treatment compliance, toxicity rate and survival outcomes.

Patients with locally advanced GC treated at our Department from 2000 to 2011 were retrospectively reviewed. All patients were assessed in a multidisciplinary clinic board by radiation oncologist, gastrointestinal surgeon and medical oncologist. The study was approved by the Institutional Reviewed Board and patients signed an informed consent.

All patients underwent surgery: gastrectomy or gastric resection with limited (D1) or extended (D2) lymph node dissection was performed at least 3 months before starting adjuvant CRT. Prior to CRT, all patients were subjected to post-surgical revaluation with clinical examination and total-body computed tomography scan.

All patients were treated with a concomitant adjuvant treatment.

Radiotherapy (RT) consisted of 45 Gy in 25 fractions (1.8 Gy/fraction, 5 days/week). In patients with resection margin microscopically involved (R1) the total dose was 50.4 Gy, with boost of 5.4 Gy.

From 2000 to 2004, external beam RT was delivered with a two-dimensional technique (2DRT) with anterior-posterior opposing fields and in the next years using three-dimensional RT (3DRT) with a multiple field technique.

The planning target volume (PTV) included tumor bed, as defined by preoperative imaging, residual stomach or anastomosis site with a safety margin of at least 2 cm and regional lymph nodes, based on the location of the primary tumor and the type of surgical procedure carried out. Regional lymph nodes included the perigastric, the periesophageal, the celiac axis, the para-aortic, the hepato-duodenal and pancreatic-duodenal lymph nodes as well as the nodes along the splenic artery to the splenic hilum and along the hepatic artery to the hepatic hilum. The dose planning for PTV and organs at risk (OAR) were performed according to the ICRU 50 [2] and 62 [3] guidelines.

A central venous access was placed for the administration of concomitant chemotherapy (CT). According to medical oncologist, two CT regimens were used: Macdonald scheme (Mcd) and Epirubicin, Cisplatin and 5-Fluorouracil scheme (ECF). Mcd consisted of continuous infusion of 5-Fluorouracil (5-FU, 425 mg/mq per day) plus Leucovorin (LV, 20 mg/mq per day) for 5 days, given every 3 weeks for two cycles, followed by continuous infusion of 5-FU (400/mg/mq/day) and LV (20 mg/mq/day) on days 1–4 and 23–25 during concomitant RT, and an additional cycles of 5-FU (425 mg/mq/day) and LV (20 mg/mq/day). The ECF scheme consisted of Epirubicin (50 mg/mq), Cisplatin (60 mg/mq) and 5-FU (200 mg/mq/day) before (1 cycle) and after (2 cycle) concurrent CRT.

During CRT patients were evaluated daily. Toxicity was graded according to the Common Terminology Criteria for Adverse Events (NCI-CTCAE), version 4.0 [4].

Standard descriptive statistics were used to evaluate the distribution of each factor. Continuous data were given as median (range), and categorical data as the number of observations and ratios.

OS and DFS were calculated in months from the date of the end of treatment to the first event, including date of the last follow-up or death (OS), and/or relapse (DFS).

OS and DFS were estimated using the Kaplan–Meier method and survival curves were compared using the log-rank test.

The following variables were investigated: sex (male versus female), age in years at diagnosis (< 65 versus ≥ 65), tumor grading (G1-2 versus G3), tumor site (cardia versus body-pylorus), CT regimen (Mcd versus ECF) and type of lymph node dissection (D1 versus D2). Variables associated with a p-value < 0.25 would be included in a multivariate survival analysis performed using Cox proportional hazard model. All reported p values are two-sided, and p-values lower than 0.05 were considered significant. Statistical analysis was performed using RStudio-0.98.1091 software.

Overall, 46 patients (94%) receive full dose of CT. Three patients (6%) were unable to complete CT: 1 patient due to G3 gastrointestinal toxicity and 2 patients due to reduced compliance. No patient had treatment interruption for progressive disease. 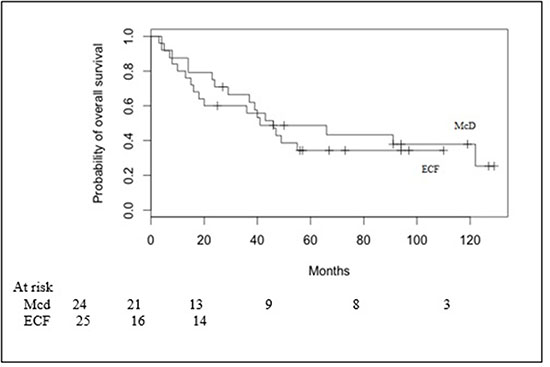 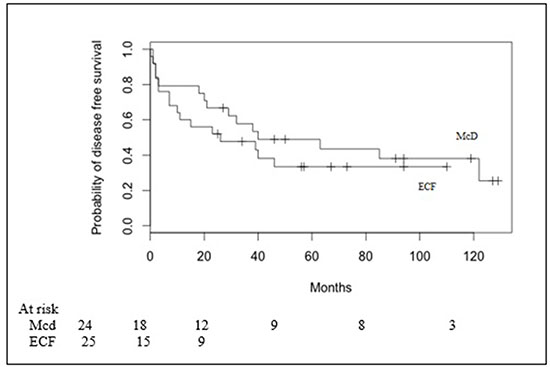 GC is usually diagnosed in locally advanced stage. Prognosis is poor, with 5-year OS of 5–20% [5]. Surgery is considered the current standard recommendation. However, survival rates remain quite low despite tumor curative resection and therefore different adjuvant strategies were extensively tested. At present, no standard CT regimens have been defined and the role of adjuvant RT after an adequate lymph node dissection is unclear.

It is well established that survival outcomes significantly differ between Asian and Western cohort studies [6]. Thus it is difficult to compare their results mainly due to differences in disease natural history, diagnostic approach and treatment strategy.

For instance, Japanese and other Asian surgeons routinely perform a D2 lymph node dissection to remove the nodes along the mains branches of the celiac axis. Whereas the vast majority of Western surgeons perform a D1 dissection, including only lymph nodes close to surgical stomach bed, in order to reduce morbidity and mortality rates.

Both Dutch trial [7] and MRC (Medical Research Council) trial [8] registered high postoperative complications and mortality rates following D2 dissection without a significant improvement in survival outcomes compared to D1 dissection. The update data of Dutch trial showed a lower LR rate and cancer-related deaths in D2 lymphadenectomy [9]. However, it should be emphasized that in more advanced stages even with an adequate lymphadenectomy the results of surgery in Western patients are still unsatisfactory [10]. In this setting of patients, additional treatments should be planned to improve patients’ long-term survival.

Based on MAGIC trial results [11], nowadays the neoadjuvant approach is recommended. The aim of neoadjuvant CT (NACT) is to downstage and downsize primary tumor and to treat potential micro-metastasis.

In the Intergroup trial INT-0116 [1] a significant OS improvement resulted in those patients who received adjuvant CRT versus surgery alone. Authors reported that 19% of patients in the CRT arm had LR versus 29% in the control arm. However, the high LR rate should be related to limited lymph node dissection. Our median OS in Mcd regimen was higher than INT 0116 trial (46 months versus 36 months). It should be noted that 73.5% of our patients underwent D2 dissection versus 10% in the INT 0116 trial. In our study, all patients with D1 dissection developed LR.

In the Korean ARTIST study [16], after gastrectomy with D2 dissection, patients were randomized to adjuvant CT or adjuvant CRT. There were no differences in DFS and OS between the two groups, but a subgroup analysis showed an improvement in DFS in the CRT group (p = 0.0365).

The European CRITICS trial [17] evaluated the clinical outcome for adjuvant CT versus adjuvant CRT after 3 cycles of NACT. The results are expected.

Our patients completed planned RT and 94% of patients received CT at full dose. The optimal toxicity rate (mainly gastrointestinal) was probably related to modern RT technique. In fact, since 2004, RT was delivered with 3DRT that allows to conform the radiation dose on the PTV and to reduce the volume and the dose to the surrounding OARs. Whereas, literature data still refers to a 2DRT technique, using two fields AP and PA. Maybe, in our study, premedication to CRT, including metoclopramide, ondansetron and dexamethasone, contributed to lower toxicity rates, too.

In the INT 0116 trial, 36% of patients did not complete the treatment, mainly due to G3-4 toxicities (17% of cases). In a retrospective study of Kundel et al. [18] higher toxicity rates were registered: 46.4% of patients presented severe adverse events, 32% were hospitalized and 1.8% died.

In this analysis, sex, age, tumor grading, tumor site, CT regimen and type of lymph node dissection were no significantly associated with OS. However, in several retrospective studies some prognostic factors were demonstrated [19–21]. N-category and N-ratio interaction, perineural invasion and extended resections were prognostic factors for survival in GC patients treated with D2 dissection in a retrospective study by Costa et al. [21]. Therefore, it seems that a category of patients may benefit from an intensified therapy. This setting of patients may be treated with NACT, surgery and adjuvant treatment, while other types of patients may benefit from a radical surgery followed by adjuvant therapy.

In conclusion, adjuvant CRT was a feasible strategy in locally advanced GC. It had an acceptable toxicity rate and it was able to increase both DFS and OS, even after extended lymph node dissection. Modern 3DRT reduced toxicity effects.

As a future perspective, it is desirable to find prognostic factors to select patients in order to provide a personalized therapy.