gadd45b (gadd45β/MyD118) is a member of a family of structurally and functionally related genes, that includes gadd45a (gadd45α/gadd45) and gadd45g (gadd45γ/CR6), which encode small (18kDa), evolutionarily conserved proteins, sharing high homology (55%-57%), highacidity (pI 4.0–4.2), and which are primarily localized to the nucleus [1–3]. gadd45b and other gadd45 genes are essentially expressed in all tissues and function as DNA damage sensors. Gadd45 proteins are involved in cell cycle regulation, DNA replication and repair through associating with protein partners, including p21, a cyclin-dependent kinase inhibitor, cdc2/cyclinB, a key kinase for G2/M progression and proliferating cell nuclear antigen (PCNA), and the p38 and JNK stress-response kinases [1].

The Philadelphia chromosome (Ph) arises from a balanced translocation involving chromosomes 9 and 22 [10]. This translocation forms the fusion protein BCR-ABL which is essential for cell transformation due to its constitutive tyrosine kinase activity. 90% of CML patients are Ph positive. Chronic myelocytic leukemia (CML) is a myeloproliferative disorder of hematopoietic stem cells and progenitors. It is characterized by progression from an indolent ‘chronic phase’ (CML-CP), a phase in which mature granulocytes hyperproliferate, to the aggressive and fatal ‘blast crisis’ (CML-BC) marked by the clonal expansion of differentiation-arrested immature blasts [11–13]. Importantly, Gadd45a was found to supress BCR-ABL driven CML in a mouse model (14). Clearly, it was of interest to examine the possible role of Gadd45b in modulating BCR-ABL driven leukemia. The present study indicates that loss of Gadd45b, like Gadd45a, accelerated CML, behaving as a tumor suppressor, albeit by a different mechanism than Gadd45a.

To address the possible role of Gadd45b in modulating bcr-abl induced leukemia, myeloid progenitor enriched bone marrow cells were isolated from both wild type and Gadd45b-/- mice and transduced with either control MSCV-IRES-EGFP, also termed as MIGR1, retrovirus vector or MIG-BCR-ABL encoding vector (Figure 1 Figure 2A). Two days after infection, 5000 GFP positive cells mixed with 495,000 GFP negative accessory cells were retroorbitally transplanted into γ-irradiated wild type syngeneic recipient mouse. As shown in Figure 2B, survival of recipient mice that were transplanted with MIG-BCR-ABL Gadd45b-/- myeloid progenitors was significantly curtailed compared to mice transplanted with MIG-BCR-ABL wild-type progenitors, due to accelerated development of CML like disease, as manifested by increased WBC (Figure 2C), increased liver weight (Figure 2D), and increase in GFP + cells in the bone marrow and spleen (Figure 2E). 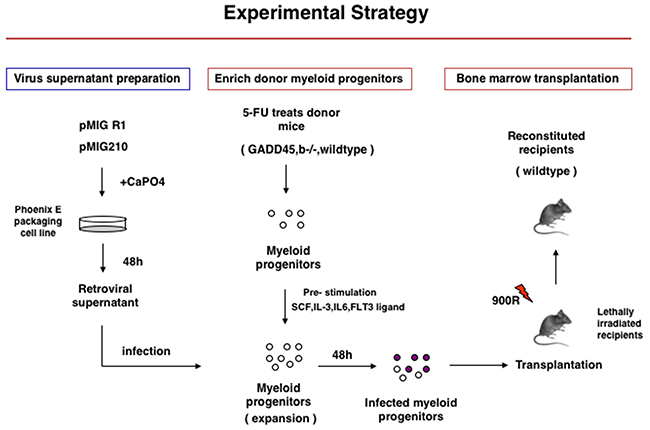 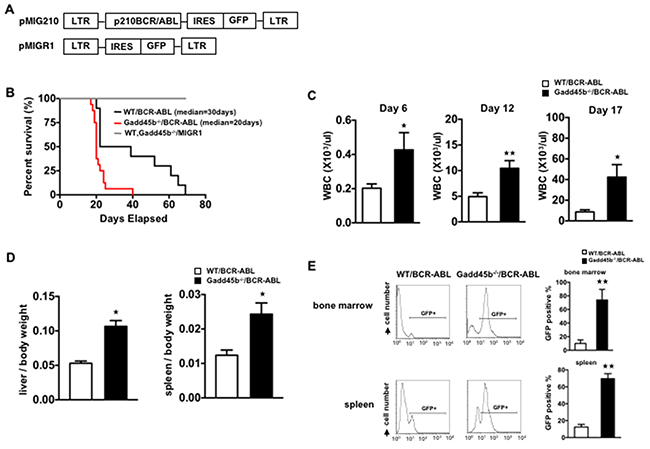 To address whether loss of Gadd45b affected the differentiation of myeloid progenitors, myeloblasts were counted from the blood smears obtained from moribund recipients. As shown in Figure 3A, 2B, the majority of mononuclear cells from both WT/BCR-ABL and Gadd45b-/-BCR-ABL recipients were mature myeloid cells. Bone marrow cells were harvested from moribund recipients and analyzed for the expression of GFP and myeloid lineage differentiation cell-surface markers Mac-1 and Gr-1. It was observed that gadd45b-/- leukemic cells exhibited similar levels of Mac-1 and Gr-1 as wild type leukemic cells (Figure 3C, 2D, 3E). These results indicate that acceleration of CML due to loss of Gadd45b is not associated with blocked differentiation. 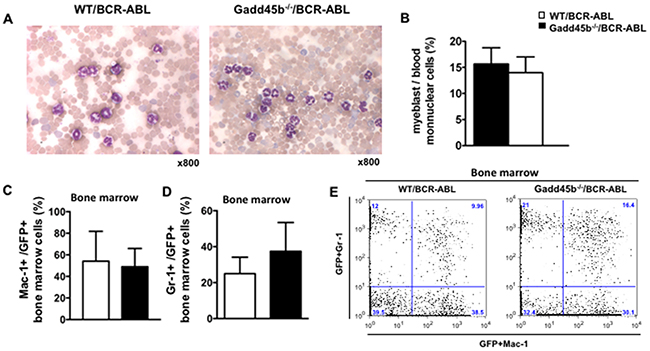 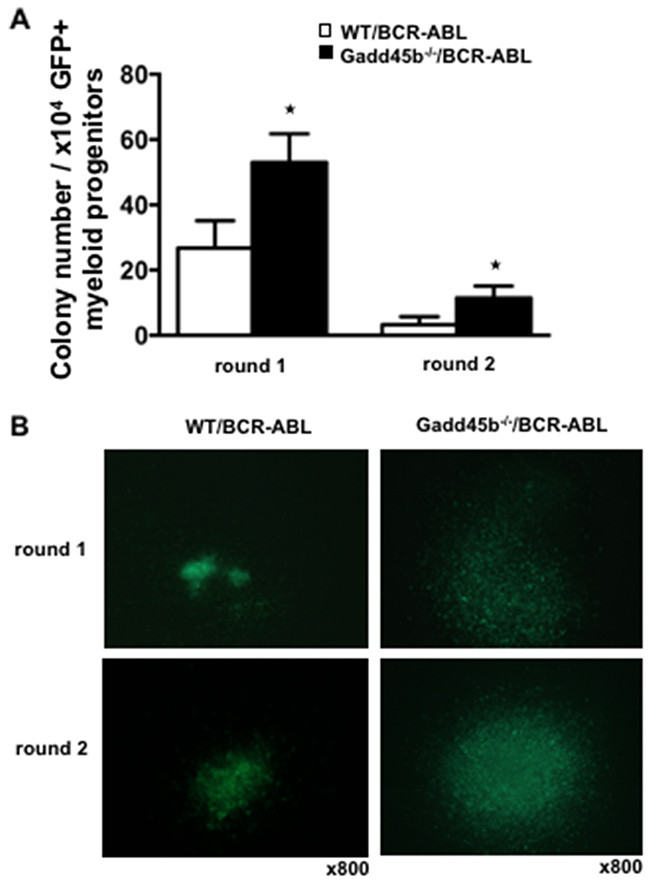 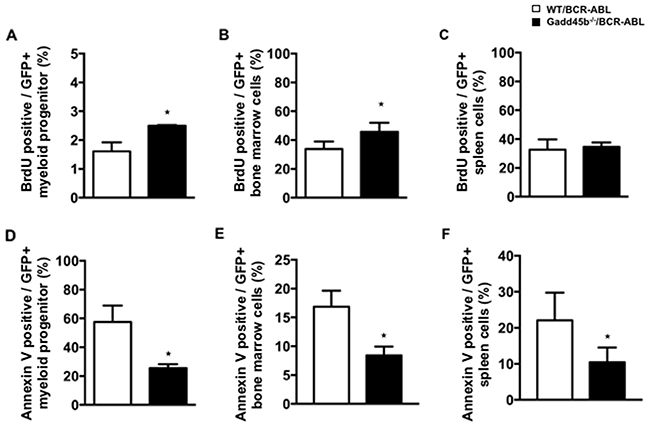 Loss of Gadd45b hyperactivates c-Jun NH2-terminal kinase (JNK) and Stat5: The phosphorylation of p38MAPK and AKT in GFP+Gadd45b-/-/BCR-ABL myeloid progenitors was similar as GFP+WT/BCR-ABL 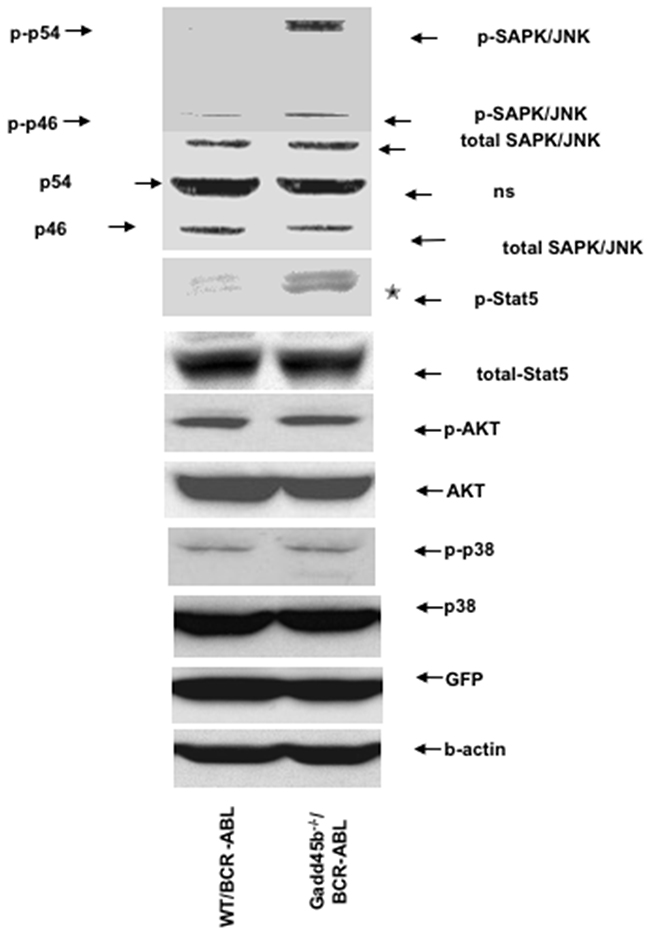 Using BCR-ABL-induced CML-like myelo-proliferative disease mouse model, it was observed that loss of Gadd45b accelerated CML progression and reduced survival of mice. Leukemic progenitors that lack Gadd45b expression were not blocked in differentiation; however, they exhibited increased proliferation and reduced apoptosis. Furthermore, loss of Gadd45b expression appeared to result in constitutive activation of JNK and STAT5.

Collectively, these result indicate that the CML suppressive phenotype of Gadd45b differs from the one observed for Gadd45a, where loss of Gadd45a resulted in increase in AKT and p38 activation but not JNK. Thus, it will be of interest to determine the consequence of loss of both Gadd45a and gadd45b on CML progression. Along similar lines, it will be interesting to explore if/how loss of Gadd45g modulates the CML phenotype.

We have also observed that Gadd45a expression in samples obtained from CML patients was upregulated in more indolent chronic phase CML samples and down regulated in aggressive accelerated phase CML and blast crisis CML [14]. Thus, studies are underway to determine the expression status of Gadd45b in CML patients.

Gadd45b−/− mice (in a C57BL/6 × 129Sv background) were graciously provided by Albert Fornace (Harvard University, Boston, MA, USA) and kept in specific pathogen-free animal facilities at Medical School of Temple University. Mice were genotyped by PCR. PCRs using three primers allowed for simultaneous detection of the WT and mutant Gadd45b allele. These primers consisted of a 5′ upstream primer (5′-GCTGTGGAGCCAGGAGCAGCA -3′), a common 3′ downstream primer (5′-ATATGCAAGCGATCTGTCTTGCTCA-3′), and a neo-specific primer (5′-AAGCGCATGCTCCAGACTGCCTT-3′). Reactions were run for 37 cycles of 94°C for 1 minute, 63°C for 14 seconds, and 72° for 12 seconds. All animal studies were approved by Temple University Institutional animal use and care committee.

Myeloid progenitors which were isolated from the bone marrow of 5-fluorouracil (5-FU, 150mg/kg) treated mice were cultured in StemPro-34 SFM complete Medium (GIBCO) supplemented with cytokine cocktail SCF (100ng/ml), IL-3 (20ng/ml), IL-6 (20ng/ml), Flt-3 (100ng/ml) before infection. For in vitro molecular signaling detection, the concentration of the cytokines were reduced as follows: SCF (12ng/ml), IL-3 (5ng/ml), IL-6 (5ng/ml). Cells were maintained in a humidified atmosphere with 5% CO2 at 37°C.

The retroviral vector MSCV-BCR/ABL-IRES-GFP and retroviral transduction of mouse bone marrow derived myeloid progenitors for induction of CML by BCR-ABL has been described previously [13]. MSCV-IRES-GFP (MIGR1) and MIGR1-BCR-ABL vectors were the gift from Warren Pear. Phoenix E packaging cells (Orbigen, Inc) were transfected with either MIGR1 or MIGR1-BCR-ABL using calcium phosphate precipitation method. 48 hours after transfection, the retroviral supernatants were harvested and centrifuged at 3200rpm for 10 minutes at 32°C. Finally, the supernatant was frozen at -80°C. To infect the enriched myeloid progenitors which were from the bone marrow of 5-fluorouracil (5-FU, 150mg/kg) treated WT and Gadd45b-/- mice 5 days in advance, 3 ml retroviral supernatant supplemented with 10μg/ml polybrene (Sigma-Aldrich) was added to 1×106 cells and centrifuged at 2200rpm for 45 minutes at 32°C. Spinoculation was repeated 4 times within 2 days. The infection efficiency was determined on the basis of green fluorescence by flowcytometry 24 hours after the fourth round infection.

Hematopoietic cells were collected from the bone marrow and spleen of mice. Erythrocytes were lysed in NH4Cl red blood cell lysis buffer (pH 7.4). The cells were washed with PBS and stained with myeloid lineage marker Mac-1and Gr-1. After staining, the cells were washed once with PBS and subjected to FACS analysis. Cells were analysed with FACScalibur. Antibodies were obtained from BD Pharmingen. Influx cell sorter (Becton Dickinson) was used for sorting GFP positive cells.

Tissues fixed in 10% buffered formalin were embedded in paraffin and sectioned. The sections were stained with hematoxylin and eosin (University of Pennsylvania Core Histologic Facility, Phiadelphia, PA, USA). Blood smears were stained in May-Gruenwald-Giemsa (GIBCO).

This work was supported by the National Institutes of Health R01 CA 162403 to Dr. Dan A. Liebermann.