Background: The benefits of adjuvant radiotherapy in rectal carcinoma are well known. However, there is still considerable uncertainty about the optimal radiation treatment. There is an ongoing debate about the choice between very short treatments immediately followed by surgical resection and prolonged treatments with delayed surgery. In this paper, we describe an interim analysis of a non-controlled clinical trial in which radiotherapy delivered with intermediate dose/duration was followed by surgery after about 2 weeks to improve local control and survival after curative radiosurgery for cT3 low/middle rectal cancer. Methods: Preoperative radiotherapy (36 Gy in 3 weeks) was delivered in 248 consecutive patients with cT3NxM0 rectal adenocarcinoma within 10 cm from the anal verge, followed by surgery within the third week after treatment completion. Results: 166 patients (66.94%) underwent anterior resection, 80 patients (32.26%) the Miles’ procedure and 2 patients (0.8%) the Hartmann’s procedure. Local resectability rate was 99.6%, with 226 curative-intent resections. The overall rate of complications was 27.4%. 5-year oncologic outcomes were evaluated on 223 patients. The median follow-up time was 8.9 years (range 5-17.4 years); local recurrence (LR) rate and distal recurrence (DR) rate after 5 years were 6.28% and 21.97%, respectively. Overall survival was 74.2%; disease free survival was 73.5%; local control was 93.4 % and metastasis-free survival was 82.1%. Conclusions: preoperative radiotherapy with intermediate dose/duration and interval between radiotherapy and surgery achieves high local control in patients with cT3NxM0 rectal cancer, and high DR rate seems to be the major limitation to improved survival.

Over the past few decades, significant advances in the treatment of rectal cancer have been made. The introduction of high-dose radiotherapy (RT) in the preoperatory period has led to a 50% reduction in local recurrence (LR) rate [1-5]. Subsequently, the introduction of the total mesorectal excision (TME) into surgical practice has allowed further reduction in LR rate below 10% [6,7]. The role of adjuvant therapies, either with or without fluorouracil-based chemotherapy (CHT), remains controversial in terms of improvement of overall survival [8-10], with a possible risk of overtreatment in patients with T3 rectal cancer. Our study started in 1988 on the basis of the French [1] and Swedish works [2] on radiotherapy, with the aim of improving outcomes in rectal cancer. RT was planned in the preoperative time and was delivered with midway dose/duration and interval between radiotherapy and surgery. The Uppsala trial showed that preoperative RT was significantly better tolerated and gave a significantly better local control than postoperative radiotherapy[2]. RT protocols are different from standard regimens. In our study the planned treatment (36 Gy in 3 weeks) was characterized by an “intermediate fraction”, and was similar to the one used in the Lyon R90-01 trial, where a total dose of 39 Gy was delivered (3.0 Gy per fraction in 13 fractions within 2 weeks) [12]. By applying a 2-week break between RT and surgery, which could be named “intermediate interval”, it is possible to take advantage of both the Swedish short interval cell-killing effect and the conventional long interval downstaging/sizing effect. Results of trials comparing local recurrence rate in preoperative RT and in surgery alone, - EORTC-40761(LR = 15% vs. 30%; P = .003) [1], Stockholm I (LR = 13% vs. 30%; P = .001) [3], SRCG (LR = 9% vs. 26%; P = .001) [5] - showed that preoperative RT reduces local recurrence rates among patients with resectable rectal cancer by more than 50% . In 1992, on the basis of the Heald’s study [13], we introduced the total mesorectal excision (TME) into our surgical practice as this surgical technique was found to markedly reduce LR. In addition, the Dutch Colorectal Cancer Group Trial demonstrated that preoperative RT maintains its benefit and, when combined with TME, reduces LR rate below 10% (LR = 5% vs. 11%; P = .001) [14]. These data supported our experience, in fact we were able to achieve high local control in patients with local advanced rectal cancer, as reported in our previous studies, where we showed a 5-year LR rate of approximately 6% in patients with cT3NxM0 clinical stage [15, 16].

In this study, we report on a radiosurgery protocol in which RT was delivered with intermediate dose/duration and was followed by surgery after about 2 weeks. We describe the postoperative outcomes of a prospective mono-institutional study on patients with cT3NxM0 rectal cancer whose median follow-up was 8.9 years. We show the results of local control obtained by using this radiosurgery treatment, which is middle between the traditional ones; we used this protocol with the aim of reducing the incidence of LR, and we considered necessary to select all those patients who had been observed for at least 5 years. Moreover, we report what happened after these 5 years: in our experience, we have not registered LR, suggesting that the chosen treatment has a number of potential advantages, both with respect to the “short” 5 days treatment and compared to the “long” 5 weeks treatment.

All 248 patients well tolerated RT; possible acute side effects, such as diarrhea, tenesmus, dysuria, were of short duration and were successfully treated with the symptomatic medical care. None of the patients interrupted the treatment. The median RT duration was 16 days (range 15 – 17 days). The 2-week planned interval before surgery had a median duration of 19.0 days (SD 5.5; range 9 – 47 days). The overall median duration of the radiosurgical treatment was 35 days (SD 5.5; range 24 – 63 days).

Postoperative mortality and morbidity rates were calculated for all patients. Sixty-eight patients (27.4%) had postoperative complications with a mortality rate of 2.02% (5 out of 248 patients). The specific morbidity rate associated with radiosurgery was 16.1% in SS vs. 36.3% in DS (P= 0.0004); whereas the overall complications significantly increased in the DS group (20.8% SS vs. 41.3% DS; P=0.0001). No statistically significant differences in the general morbidity and mortality rate were observed (Table 2).

Twenty-one out of 248 eligible patients who had liver metastasis at surgery were excluded from the study; 1 patient was resection margin positive and 3 patients died due to postoperative complications. In total, 223 patients were eligible for follow-up. The median follow-up time of alive patients was 8.9 years (range 5 to 17.4 years). 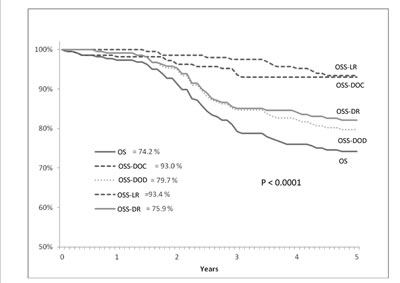 The protocol was violated in two 81-year old patients. 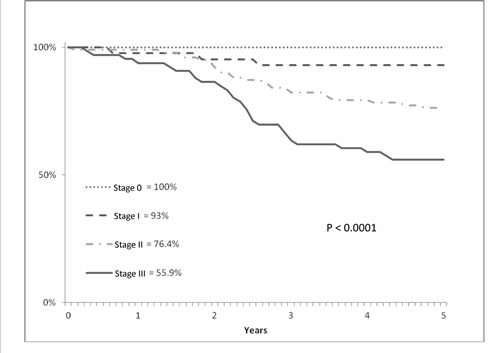 These premises allow to draw some final consideration, which may be useful for clinical practice. Rectal cancer staging is essential to help clinicians make the right decision on the type of surgery to apply and to determine whether or not neoadjuvant therapy would be appropriate. According to our experience, the local resectability rate for cT3 rectal cancer patients is about 99%. Consequently, TME preceded by RT allows reducing LR rate below 10%. It is therefore essential for surgeons to have a role in multidisciplinary teams in order to have a better control of LR rates and to monitor their own surgical practice quality, as well. It must be stressed that RT or CHT cannot compensate for poor surgery. The dose and fraction of RT we apply seem a good compromise between the long and short course RT, and they are well accepted by our patients. Hopefully, this intermediate RT schedule will have a role in clinical practice in the next future [34]. Surely, it is necessary to introduce further protocols with new CHT treatments able to reduce distant metastases and LR in circumferential resection margin positive patients [35]. The reduction in DR and its impact on overall survival will be the challenge for the future. On the other hand, new prospects, such as the clinical complete response and the “wait-and-see” strategy, should be strengthened, even if, nowadays, this policy is very difficult to follow due to various clinical and ethical reasons [36,37].

RT treatment was performed with a total radiation dose of 36 Gy, delivered in 12 daily fractions of 3 Gy each day for 5 days/week using a 6 or 8 MV x-ray linear accelerator and the four-field box technique; the patient was placed in the prone position. Until June 2002, 146 patients (58.8%) were treated with the 2D conventional technique; thereafter the remaining 102 patients (41.2%) were treated with the 3D conformal technique. The RT treatment plan was established on the basis of the CT scan results. The superior border of the treatment volume was set at the L5-S1 junction; whereas the inferior border was set at the bottom of the ischial tuberosities or at the perineum, depending on the disease extent. The anterior–posterior and posterior–anterior (AP-PA) fields encompassed the whole pelvis with 1.5-2 cm of margin on the bony pelvic inlet; lateral fields encompassed the sacrum posteriorly and the femoral heads anteriorly. For CTV delineation, the AIRO (Associazione Italiana Radioterapia Oncologica) guidelines were used. The three-dimensional conformal RT (3D CRT) with simulation performed on a Toshiba Large Bore CT scanner was performed; the patient was placed in the supine position and his/her legs were immobilized. The same position was maintained for the entire duration of the treatment. The prescribed dose was referred to the axis intersection (ICRU 50).

Surgery (anterior resection or abdominoperineal excision) was planned before RT and performed within the third week after completion of the RT treatment. It was considered locally curative when, after surgical and histopathological evaluation, the margins of the resected tissue were free of tumor. Sphincter saving (SS) surgery requires a 2-cm distance from the cancer’s lower border. Total mesorectal excision (TME) was introduced in 1992. The operative specimen was examined and classified according to the International Union Against Cancer’s TNM system [11]. Adjuvant chemotherapy was prescribed according to the referring medical oncologist. .

Normal distribution assumption was checked by means of Shapiro-Wilks and Kolmogorov-Smirnov tests. Differences in proportions were analyzed using the Chi-square test (Fisher-Yates test). LR and DR and survival analysis were based on all patients who received curative-intent surgery. Survival rates were calculated by using the Kaplan–Meier method for the analysis of censored data, and survival curves were compared with the log rank test. P < 0.05 was considered statistically significant. All analyses were performed and graphs were drawn with SPSS software (IBM SPSS Statistics, IBM Corporation, Chicago, IL).

This work was supported by the “5x1000” voluntary contribution. The authors thank Chiara Di Giorgio for manuscript proofreading.

There is no conflict of interest to declare in relationship to this article.

AWD = Patients alive with evidence of (local or

DOC = Patients who died with no evidence of

DOD = Patients who died with evidence of disease

NED = Patients alive with no evidence of disease.

2. Pahlman L, Glimelius B: Pre- or postoperative radiotherapy in rectal and rectosigmoid carcinoma. Report from a randomized multicenter trial. Ann-Surg 1990; 211: 187-195.

27. Gastrointestinal Tumor Study Group: Radiation therapy and fluorouracil with or without semustine for the treatment of patients with surgical adjuvant adenocarcinoma of the rectum. J Clin Oncol 1992; 10: 549-557.