The most relevant issue limiting the feasibility of addition of more drugs in a chemotherapy combination is the proper design of the schedule assuring the balance between tolerability for individual patients and effective received dose intensity (DI) of each drug in order to obtain the expected efficacy of the combination. Intensive regimens based on triplet chemotherapy in MCRC, and FOLFIRINOX regimen in metastatic PDAC, frequently required proper clinical management of toxicity and treatment modulations due to moderate/severe toxicities [24, 25].

Over the last 10 years, we developed triplet chemotherapy regimen according to FIr/FOx schedule, characterized by 12-hour (10PM to 10AM) timed-flat-infusion (TFI) 5-FU (TFI/5-FU), without leucovorin, associated to irinotecan (CPT-11) and OXP, according to a weekly alternating schedule, also added to bevacizumab [26, 27]. FIr/FOx showed efficacy equivalent to other triplet schedules, such as FOLFOXIRI [28, 29], with a good tolerability profile [30, 31], as first-line treatment of metastatic colorectal cancer (MCRC) patients, with increased received 5-FU DI and lower rate of grade 3-4 neutropenia. Intensive triplet chemotherapy plus bevacizumab, according to FIr-B/FOx schedule, was equivalently safe and feasible in young-elderly patients, selected by favourable PS, and comorbidity status. The evaluation of limiting toxicity syndromes (LTS), multiple site (LTS-ms) or single site (LTS-ss), represented an innovative indicator of toxicity of the individual patient [32, 33]. More, pharmacogenomic biomarkers of 5-FU, CPT-11 and/or OXP metabolism, could be evaluated to predict gastrointestinal toxicity in individual patients [34–36].

Baseline CA19.9 measurement was normal in 3 patients, elevated in 26. 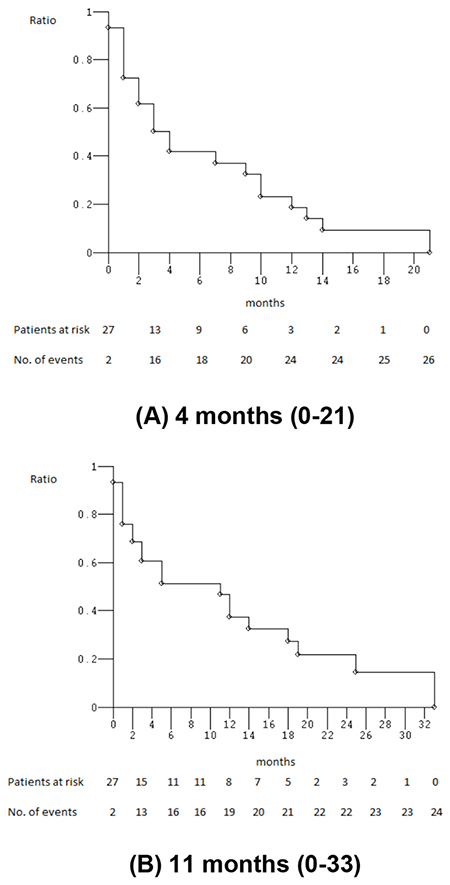 Triplet chemotherapy according to FIr/FOx schedule met projected high activity as first-line treatment of metastatic PDAC patients, reaching the first step of activity according to Simon-two step design: ORR 50% in the intent-to-treat and 53% in the as-treated analysis, with PFS 4 months (10.3% of patients progression-free > 12 months), and OS 11 months (27.5% of patients alive > 12 months), in the preliminary analysis of efficacy. Activity and clinical outcome of FIr/FOx exceeded that reported with gemcitabine: median OS 5.7 months, and 1-year OS rate 20%, median PFS 2.08 months, ORR 5.4% [1, 2]. Activity and clinical outcome may be higher than those reported with first generation gemcitabine-based combinations, excluding nab-paclitaxel: ORR 6.9-26.8%, median PFS 2.7-6 months, median OS 5.7-9 months [5–16].

Recently, phase III trials evaluating more intensive first-line chemotherapy regimen, such as gemcitabine plus nab-paclitaxel and triplet FOLFIRINOX, demonstrated to be much more, and equivalently effective, with significantly increased survival benefit over standard gemcitabine alone in metastatic PDAC patients [24]: ORR 23% and 31.6%, median PFS 5.5 and 6.4 months, OS 8.7 and 11.1 months, respectively. In the FOLFIRINOX study, median OS was significantly prolonged up to 11.1 months, with an increase of 4.3 months, compared with 6.8 months in the gemcitabine arm (hazard ratio for death, 0.57; P < 0.001) [24]. OS rate at 12 months was 48.4%, compared with 20.6% in the gemcitabine arm. In the recently reported phase III trial proposing gemcitabine and nab-paclitaxel association, 12-months OS rate was 35% [23]. Activity and clinical data reported with FIr/FOx in the present study are in the range of those reported with conventional intensive first-line treatment in PDAC patients. Thus, more active first-line treatment of metastatic PDAC can contribute to increase efficacy. FIr/FOx schedule may increase activity and efficacy of metastatic PDAC, with clinical outcome overlapping that reported with other triplet chemotherapy schedules, and evaluated in phase III randomized trials, as previously reported in MCRC setting [26, 27].

Our present real life study on consecutive, unselected patients showed that 13 patients (44.8%) were not evaluable in the ITT analysis because they did not received at least 3 cycles of treatment, thus confiming that, even today, the primary challenge of clinical management of metastatic PDAC patients is to start and safely perform at least 3 cycles of intensive chemotherapy treatment, to evaluate activity contributing to increase clinical outcome.

Among patients treated with intensive triplet FIr/FOx regimen, PFS and OS were not significantly different among patients treated with modulated and standard drug dosage, due to clinical parameters requiring treatment modulations. PS 2 significantly affected worse OS (1 compared with 12 months, P = 0.022), thus confirming overall benefit in clinical outcome achieved by metastatic PDAC patients with PS 0-1, treated with gemcitabine-based combinations [17]. In the MPACT trial, PS, presence of liver metastases, age, and number of metastatic sites involved were independent prognostic factors for OS and PFS [39, 40]. In our present study, PFS and OS seemed not significantly different according to primary tumor location (head or not), nor according to liver or other metastatic site, even if the small number of enrolled patients limited the relevance of subgroup analyses.

In the present study, LTS were observed in 27.5% of individual patients and in 38.4% of elderly patients treated with FIr/FOx regimen. The innovative clinical evaluation of LTS, consisting of at least the LT associated or not to other G2 or LT, introduced to better evaluate, in the individual patient, the presence of LT alone, LTS-ss, or the association of major toxicities in different sites, LTS-ms, showed that: overall, they were 3.4% and 24.1%, respectively; among elderly patients, they were all LTS-ms 38.4%. LTS were not significantly represented by LTS-ms compared to LTS-ss, even if the small number of enrolled patients requires further analyses. LTS-ms were mostly represented by diarrhea, mucositis, asthenia, neurotoxicity, thrombocytopenia and/or anemia, associated to nausea, vomiting, anorexia and/or neutropenia, hypokaliemia, hypoalbuminemia, hypertransaminasemia. In the individual patient, limiting and moderate toxicities often characterized LTS, previously observed in 44% MCRC patients treated with FIr-B/FOx, and equally involving single or multiple sites [27, 32].

Reported data confirmed that intensive regimens, such as FIr/FOx, frequently required proper clinical management of toxicity and treatment modulations due to moderate/severe toxicities. Careful selection of eligible patients, based on age, PS, comorbidity index, and monitoring of individual safety, also according to LTS in individual patients, are major parameters to optimize clinical management of metastatic PDAC. More, close monitoring of patients, expertise with a particular regimen, and toxicity management, remained the physician-related factors, that can guide personalized selection of first-line regimens in individual PDAC patients.

This was a single-arm phase II study evaluating safety and activity of weekly alternating 5-FU, CPT-11, and OXP (FIr/FOx) as first-line treatment of metastatic PDAC.

Primary end-point was ORR; secondary end-points were toxicity, PFS, OS. ORR was evaluated according to RECIST criteria [43]; PFS and OS using Kaplan and Meier method [44]. PFS was defined as length of time between the beginning of treatment and disease progression or death (resulting from any cause) or to last contact; OS as length of time between the beginning of treatment and death or to last contact. The log-rank test was used to compare PFS and OS [45]. Clinical evaluation of response was made by computerized tomography (CT)-scan; magnetic resonance imaging (MRI) and/or positron emission tomography (PET) were added based on the investigators’ assessment; objective responses were confirmed three months later. Follow-up was scheduled every three months, up to disease progression or death. Toxicity was monitored every week according to National Cancer Institute Common Toxicity Criteria (NCI-CTC, version 4.0). LT was defined as grade 3-4 non-haematological toxicity (mainly represented by diarrhea, mucositis, neurotoxicity, hand-foot syndrome, asthenia, liver functional tests), grade 4 hematologic toxicity, G4 neutropenia, febrile neutropenia, G3-4 thrombocytopenia, or associated with significant clinical bleeding, grade 3-4 anemia, G2-3 neurotoxicity, or any toxicity determining a > 2 weeks treatment delay.

LTS, consisting of at least a LT associated or not to other limiting or G2 toxicities, were evaluated as previously reported [27, 32]. These were classified as: LTS-ss, if characterized only by the LT; LTS-ms, if characterized by ≥ 2 LTs or a LT associated to other, at least G2, non-limiting toxicities. Chi-square test was used to compared the rates of LTS-ms and LTS-ss [46].

Correlations between maximum decrease from baseline in CA19.9 level and PFS and OS were analyzed, to assess possible relationships between CA19.9 and clinical outcomes.

This phase II study was planned according to two-steps Simon’s design [38]: assuming as minimal interesting activity an ORR 10%, 1 objective response among the first 10 enrolled patients was necessary for the first-step; to verify the alternative hypothesis of ORR 30%, 5 objective responses among the total 29 enrolled patients were necessary; power (1 - β) 80%; error probability α 5%. p0 was considered as the estimated activity reported with gemcitabine alone (median ORR 10%), and confirmed with the association of gemcitabine plus erlotinib (ORR 8.6%) [1–5, 16]; p1 as the projected ORR using the present intensive triplet combination, according to FIr/FOx schedule, increasing the activity ≥ 20% in metastatic PDAC patients, as reported with FOLFIRINOX (ORR 31.6%), and with the association of gemcitabine and nab-paclitaxel in the phase I/II trial (ORR 46% in the overall population, and 48% in patients treated at the recommended dose of nab-paclitaxel 125 mg/m2; ORR 23% in the more recently reported phase III trial) [22–24].

The authors have declared that they have no conflicts of interest.