Objective: We aimed at characterizing the clinical-pathologic and mutation profile of metastatic and not-metastatic TM in order to distinguish lesions at risk of metastases.

Methods: Clinical-pathologic characteristics were recorded for the TM cases analyzed. We used a Next Generation Sequencing (NGS) multi-gene panel to characterize TM for multiple somatic mutations.

Conclusion: Our study indicates Breslow thickness ≥0.6 mm as a valid prognostic factor to distinguish TM at risk for metastases.

From a clinical and molecular standpoint, melanoma is a complex, heterogeneous and unpredictable disease. The incidence of malignant melanoma (MM) has drastically increased in the past decades [1]. Approximately 70% of new cases of MM are thin melanomas (TM), which are lesions ≤1.00 mm in Breslow thickness, and TM diagnosis are increasing around the world [2]. After local excision, thin tumors have a 10-year survival rate of 85-90% [3]. However, the high percentage of TM without recurrences is in contrast with a group that could develop recurrences and regional or distant metastases [4–7]. The TM histopathological parameters have been extensively studied in the literature and they have been associated with prognosis [8].

Several studies showed numerous parameters indicative of unfavorable prognosis for TM patients including male sex, advanced age, trunk and head/neck anatomic sites, III and IV Clark levels, presence of marked regression, absence of inflammatory infiltrate, presence of ulceration areas and high mitotic rate [9–11]. However, existing prognostic factors cannot reliably differentiate high- and low-risk TM patients. To the best of our knowledge, only a few studies have analyzed the molecular profile of TM and to date there is no molecular predictor of disease progression [12, 13]. In recent years, significant advances in the genetic field have led to the identification of specific driver mutations in melanocytic tumors [14–16]. BRAF, NRAS and TP53 mutations are the most prevalent pathogenic alterations in melanoma [17], but key genetic changes are also identified in CDKN2A, KIT, GNAQ and GNA11 genes [18–21]. Mutation frequencies of these genes change according to the different personal data and pathological features of MM [22], revealing a complex mutational pattern that could be evaluated to predict the risk of developing metastases.

In this study, we aimed at characterizing the clinical and molecular profile of metastatic and not-metastatic TM cases. First, we evaluated a possible association between the presence of metastases and the pathological features. Furthermore, we used a Next Generation Sequencing (NGS) gene panel including 15 genes, relevant in tumorigenesis and targeted therapies, with the aim to investigate multiple somatic mutations in metastatic and not-metastatic TM cases. The identification of patients with high-risk of developing metastatic disease could be potentially used in the clinical practice, in order to gain the best prognostic classification and to potentially define the best therapeutic choices.

Clinical-pathologic features and association with the presence of metastases

Somatic mutation profile and association with the presence of metastases

The somatic mutation profile of the 15 most frequently mutated genes in solid tumors was screened in all 21 TM samples by TruSight Tumor 15 panel, using NGS technology. Figure 1 reports an overview of the percentages of mutations identified in BRAF, NRAS, TP53, KIT, and ERBB2 genes, the distribution of point mutations in metastatic and non-metastatic TM cases analyzed, labeled by Breslow thickness (≤ 0.5 mm and ≥0.6 mm) and the presence or absence of metastases. We detected a total of 22 mutations in 19 of the 21 (90.5%) TM cases analyzed. All seven metastatic and 12 of 14 not-metastatic TM cases had at least one mutation in the genes analyzed (Table 2). We did not find a statistically significant difference between metastatic and not-metastatic cases and the presence of all mutations; the same results were obtained when the most frequently mutated genes (BRAF, NRAS and TP53) were evaluated separately (Table 2).

Figure 1: Distribution of gene mutations in metastatic and non-metastatic thin melanoma cases, labeled by pink and blue bars, respectively. Thin melanoma cases with a Breslow thickness of ≤ 0.5 mm and 0.6-1 mm are showed by light green and yellow bars, respectively. To the left of the figure are the percentages of mutations identified in BRAF, NRAS, TP53, KIT and ERBB2 genes.

Table 2: Distribution of 21 metastatic and not-metastatic thin melanoma cases according to all gene mutations and specific mutated genes 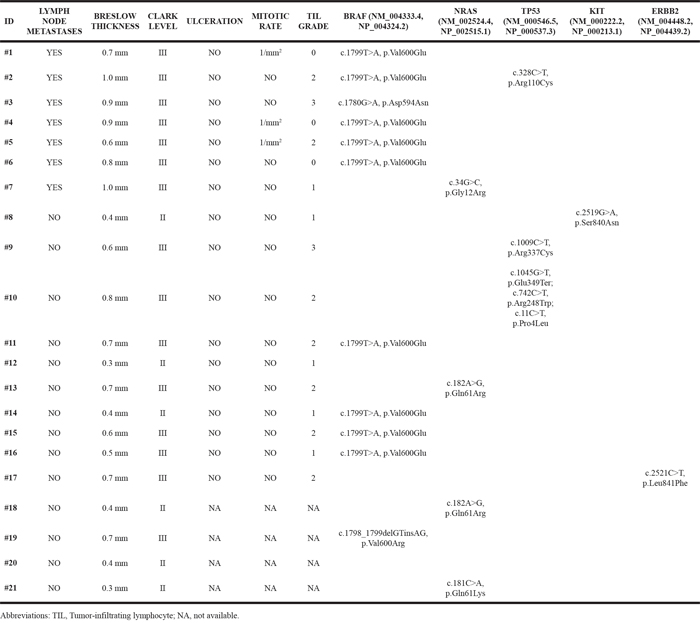 In this study we analyzed a series of TM, in order to investigate clinical-pathologic and molecular differences in metastatic and not-metastatic cases. The strategy of early detection and the greater incidence of melanomas in the last years has contributed to increase the diagnosis of TM [25]. Unfortunately, despite the excellent prognosis of TM, a small group of patients could develop metastases, fatal in 5% of the cases [26]. It is therefore of great interest to identify predictors of poor prognosis in TM patients [8]. Several authors highlighted an increased risk of progression for TM with Breslow thickness ≥0.75 or ≥0.5 mm [6, 25, 27]. Most studies analyzing TM risk progression identified ulceration and mitotic rate as main predictors [6, 27], while others indicated other risk factors [28–30]. Our results showed that the presence of lymph-node metastases was associated with Breslow thickness ≥0.6 mm (p=0.003). In particular, none of TM with lymph-node involvement had Breslow thickness <0.6 mm. These observations confirm Breslow thickness as the most powerful predictor of developing metastatic disease. Most studies showed that the presence of lymph-node metastases is very rare (<5%) in melanomas with Breslow thickness <0.8 mm and occur in approximately 5% to 12% of patients with primary melanomas with Breslow thickness from 0.8 to 1.0 mm [6, 31–33].

Mutations were also found in KIT and ERBB2 (4.8%). Overall, our data are in agreement with literature data showing that BRAF is mutated in about 50% of melanomas [14, 35, 36] and that NRAS is the second most frequently mutated gene [37]. In agreement with literature data [38], we also showed that the most frequent BRAF mutation was the c.1799T>A (p.Val600Glu). In addition, we identified two different BRAF mutations, c.1780 G>A (p.Asp594Asn) which results in an inactivation of BRAF gene [39] and c.1798_1799GT>CG (p.Val600Arg), which rarely occurs in melanoma [40]. In our series, one metastatic case showed the concurrent presence of BRAF and TP53 mutations. Recent Whole Exome Sequencing (WES) study attributed a TP53 mutation frequency of 19.0% in melanoma [14]. We identified one not-metastatic TM case with multiple TP53 variants (c.1045G>T, p.Glu349Ter; c.742C>T, p.Arg248Trp; c.11C>T, p.Pro4Leu). To date, there are conflicting data about the role of TP53 alterations in melanoma [41, 42] and further studies could help to clarify the role of this gene in melanoma progression. We identified the ERBB2 c.2521C>T (p.Leu841Phe) mutation in one case. This mutation is located in the kinase domain and, to our knowledge, it has not been previously reported. In recent study no ERBB2 mutations were found in melanoma, however the importance of ERBB2 mutations in the kinase domain is well documented in a wide variety of human cancers [43]. Further studies are needed to clarify the role of ERBB2 mutations in melanoma, as it may help for considering targeted therapy. We also identified the KIT c.2519G>A (p.Ser840Asn) mutation in one case. This mutation was found for the first time in a 2-year-old boy affected by cutaneous mastocytosis [44]. KIT mutation is most frequently observed in acral, mucosal and chronically sun-exposed melanomas [45, 46]. In our study, KIT mutation was identified in a TM located in acral site. KIT is another important checkpoint for the targeted therapy in melanomas, since molecules as imatinib, nilotinib and apatinib can affect melanoma cells with KIT mutations [44–46]. Notably, in our series only two cases were negative for the presence of mutations in the genes analyzed. Both these cases were not-metastatic cases and had low Breslow thickness (<0.4 mm). On the other hand, we detected mutations in more than one gene (BRAF and TP53) in one metastatic case with a high Breslow thickness (1.0 mm).

In conclusion, our findings support and confirm Breslow thickness as a valid prognostic factor, able to distinguish TM with a high- or low-risk of developing metastases and suggest that Breslow thickness ≥0.6 mm may be considered as a threshold value where Sentinel Lymph Node Biopsy should be discussed and considered. Future studies on a larger cohort of TM patients examined by NGS analyses are needed to provide a genetic profile that could be useful as a prognostic and predictive factor.

We performed a retrospective observational study on a selected series of 21 TM cases including seven metastatic and 14 not-metastatic cases. Cases were selected to include: melanoma patients with lesions ≤1.00 mm in Breslow thickness, comparable median age at diagnosis and a comparable number of female and male individuals. The series included in the study was collected between January 2009 and December 2015 at the Department of Dermatology and Venerology, Sapienza University of Rome and at the Laboratory of Dermatopathology of the “San Gallicano” Dermatological Institute and at the Dermato-oncology and preventive Unit of San Gallicano Institute of Rome. All patients involved in the current study signed an informed consent form with a detailed description of the study protocol. The study was approved by The Local Ethical Committee (Sapienza University of Rome, Protocol 873/13). The study was performed according to the Helsinki’s declaration. All cases were characterized by the personal data (sex and age at diagnosis) and by the main clinical-pathologic features including presence of metastases, anatomic site based on sun exposure (chronic, continuous or intermittent), Clark level, Breslow thickness, mitotic rate (number of mitoses/mm2), ulceration status and tumor-infiltrating lymphocyte (TIL) grade based on assessment of absent, mild, moderate, or marked density (TIL grade 0-3). Genomic DNA of both tumor and normal tissue samples was extracted from 10 μm-thick microdissected formalin fixed paraffin-embedded (FFPE) sections, using QIAamp DNA FFPE tissue kit (Qiagen), according to the manufacturer’s instructions. DNA quantification was performed with Qubit dsDNA HS Assay Kit (Invitrogen), according to the instructions provided by the manufacturer.

Mann-Whitney and Fisher’s exact test were used (where appropriate) in order to evaluate the potential associations between the presence of metastases and pathological features and the potential association between the presence of metastases and the mutation profile. A p-value ≤0.05 was considered statistically significant. All statistical analyses were performed with the R software (www.r-project.org).

Virginia Valentini contributed to this paper as recipient of the PhD program of Biotechnologies and Clinical Medicine Sapienza University of Rome.