A Phase Ib, open-label, dose-finding study of alpelisib in combination with paclitaxel in patients with advanced solid tumors

Although paclitaxel, a taxane-based chemotherapy, has been approved as a weekly injection for the treatment of several solid tumors [1], most patients develop resistance and progressive disease [2, 3]. Resistance to paclitaxel has been associated with phosphatidylinositol 3-kinase (PI3K)/mechanistic target of rapamycin (mTOR) pathway activation in vitro and in vivo [4-6]. However, the administration of a PI3K inhibitor has increased sensitivity in paclitaxel-resistant prostate cancer cells [6]. In addition, decreased tumor burden was observed in mice inoculated with ovarian cancer cells and treated with a PI3K inhibitor plus paclitaxel compared with those treated with paclitaxel alone [5].

Activation of the PI3K/mTOR pathway frequently occurs via mutations in PIK3CA, which encodes the class I PI3K p110α catalytic subunit [7]. Further, PIK3CA mutations are among the most frequently observed alterations in solid tumors [8-12]. Therefore, administration of paclitaxel plus a PI3K p110α-specific inhibitor is a potential therapeutic strategy by which to delay disease progression in patients with advanced solid tumors.

Alpelisib (BYL719) is an oral, selective inhibitor of class I PI3K p110α that has shown potent antitumor activity in preclinical studies [13, 14]. In a Phase Ia study of single-agent alpelisib in patients with advanced solid tumors (NCT01219699), a tolerable safety profile and encouraging preliminary activity was observed in those with PIK3CA-altered (mutation/amplification) advanced solid tumors, with the maximum tolerated dose (MTD) declared as 400 mg once daily (QD) [15, 16]. In addition, single-agent alpelisib was generally well tolerated, with the most frequent all-grade, treatment-related adverse events (AEs; ≥30% of patients) including hyperglycemia (51.5%), nausea (50.0%), decreased appetite (41.8%), diarrhea (40.3%), and vomiting (31.3%) [15, 16]. Hyperglycemia is an expected on-target side effect of PI3Kα inhibition given the involvement of PI3Kα in glucose homeostasis regulation and occurs more frequently with a targeted compound like alpelisib compared to pan-PI3K inhibitors or to beta, gamma or delta specific PI3K inhibitors. The most frequent all-grade AEs (≥30% of patients) reported with a 1-hour intravenous (IV) infusion of paclitaxel 80 mg/m2 once weekly (QW) included fatigue (47%), alopecia (36%), abdominal pain (33%), nausea (31%), and peripheral neuropathy (31%) [17].

Here, we report the results from a Phase Ib dose-finding study, which evaluated the MTD of alpelisib QD when administered with paclitaxel in patients with advanced solid tumors, and discuss the safety profile of this combination.

a Seven patients were not evaluable due to not experiencing a DLT in Cycle 1 and inadequate drug exposure.

b Grade 4 hyperglycemia and Grade 3 acute kidney injury DLTs were experienced by the same patient.

Table 4: Treatment-emergent adverse events (≥20% of all patients, all grades) regardless of relationship to study drug

There was one on-treatment death (during treatment or within 30 days of last study treatment dose): a patient died due to progression of small cell lung cancer on Day 101, 18 days after the last administration of alpelisib. 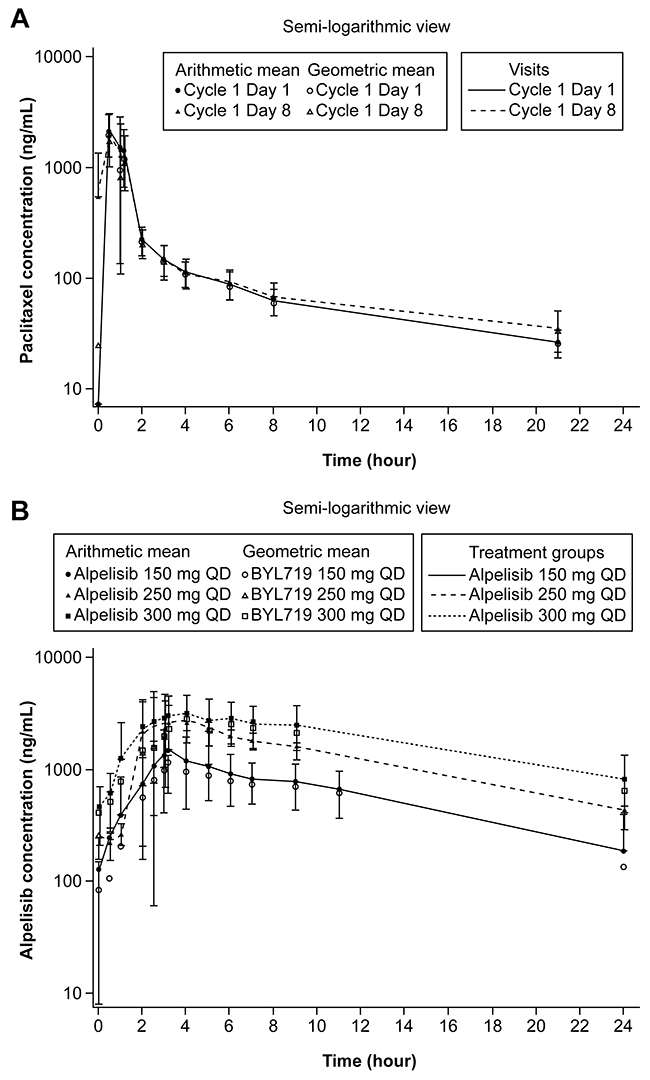 Figure 2: Waterfall plot of tumor responses. Best percentage change from baseline in sum of longest diameters and best overall response per local investigator assessment. PD, progressive disease; PR, partial response; QD, every day; QW, every week; SD, stable disease. *One patient who did not have any target lesion at baseline has been excluded from the graph. Missing bar denotes a missing percentage change from baseline. Data cut-off: August 19, 2016.

The MTD of alpelisib was 150 mg QD when administered with paclitaxel 80 mg/m2 QW in patients with solid tumors; however, the overall tolerability of this regimen was challenging. In contrast, the MTD of single-agent alpelisib in a first-in-human study in patients with solid tumors was higher at 400 mg QD, with a manageable safety profile [15, 16].

Hyperglycemia was the most frequent DLT during dose finding, occurring in four of 12 evaluable patients (33.3%). In all patients treated with alpelisib 150–300 mg QD plus paclitaxel (N=19), hyperglycemia was the most frequent Grade 3/4 AE. The occurrence of hyperglycemia in the present study was consistent with that in patients treated with single-agent alpelisib, where hyperglycemia was also the most frequent DLT during dose finding, occurring in seven of 68 evaluable patients (10.3%) [16]. In patients treated with single-agent alpelisib 30–450 mg QD or 120–200 mg twice daily (N=134), hyperglycemia was also the most frequent all-Grade AE suspected to be treatment related (69 [51.5%]) and Grade 3/4 AE (32 [23.9%]) [16]. Hyperglycemia is an expected on-target side effect of PI3Kα inhibition given the involvement of PI3Kα in glucose homeostasis regulation [13-19]. In the present study, hyperglycemia was managed with oral antidiabetic medications (e.g. metformin; insulin considered for higher grades) and dose interruption of alpelisib followed by re-starting the same dose or undergoing dose reduction depending on the initial grade of hyperglycemia and subsequent fasting plasma glucose level. Other AEs were managed by concomitant medications and alpelisib dose interruption and/or reduction. The rates of dose reduction and interruption were high across all dose levels, although these rates should be interpreted with caution given the small cohort sizes. It should also be noted that the administration of corticosteroids as a premedication was not standardized, which prevented their contribution to the rates of AEs, namely hyperglycemia, from being determined. AEs leading to study drug discontinuation were reported in three patients; in two of the patients these AEs included ones previously reported for weekly paclitaxel (peripheral neuropathy and neutropenia) at the same dose in this study [20].

Preliminary efficacy results for alpelisib 150 mg QD plus paclitaxel are inconclusive; in a Phase I study, single-agent alpelisib exhibited preliminary anti-tumor activity in solid tumors from doses of 270 mg QD and higher [15, 16]. Therefore, given the challenging safety profile of alpelisib plus paclitaxel, the potentially limited clinical activity of alpelisib at 150 mg QD [15, 16], and the emergence of new treatment options for patients with breast cancer, the planned dose-expansion phase of this study was not initiated and the intermittent administration of alpelisib not investigated. The present study was therefore closed following the completion of the dose-finding phase.

In contrast to this study, the combination of alpelisib with nab-paclitaxel was well tolerated in a Phase I study (N=10) [21]. The MTD of alpelisib was not reached and the recommended Phase II dose was alpelisib 350 mg daily plus nab-paclitaxel 100 mg/m2 IV weekly [21]. Although the results need to be verified in a larger cohort, this study indicates that adding alpelisib to a taxane may be possible.

In the dose-finding phase, the primary objective was to determine the MTD and/or recommended Phase II dose (RP2D) of alpelisib QD when administered with paclitaxel 80 mg/m2 QW in patients with advanced solid tumors, and the secondary objectives were to assess safety and tolerability and to characterize the pharmacokinetic (PK) profile.

All patients provided written informed consent. The study was conducted in accordance with the Declaration of Helsinki and guidelines for Good Clinical Practice, as defined by the International Conference on Harmonization.

The study was initiated on March 5, 2014. A first protocol amendment (June 23, 2014; after six patients had been treated) allowed two additional starting doses of alpelisib; other amendments included changing the permitted fasting plasma glucose value at screening from ≤140 mg/dL to ≤120 mg/dL, modifying the dose-limiting toxicity (DLT) grading of hyperglycemia for consistency with Common Terminology Criteria for AEs (CTCAE) v4.03, and updating the management of some AEs to align with the overall clinical program. The main purpose of the second amendment (January 28, 2015; after 14 patients had been treated) was to modify the guidelines for pneumonitis management.

Safety was monitored by physical examination and assessment of vital signs, weight, and performance status; and by performing electrocardiogram, cardiac imaging, ophthalmic, and laboratory evaluations. AEs were assessed continuously and graded per CTCAE v4.03. Radiologic response was evaluated by computed tomography or magnetic resonance imaging by the local investigator per RECIST v1.1 at baseline and 8-weekly intervals. PK samples for alpelisib were collected from all patients. PK samples for paclitaxel were taken on Cycle 1 Day 1/2 before, during, and after the end of infusion, and again on Cycle 1 Day 8/9 after seven doses of alpelisib. Treatment with alpelisib was initiated on Cycle 1 Day 2, and PK samples were taken during steady state on Cycle 1 Day 8/9 before, during and after the influence of premedication and paclitaxel to assess impact on alpelisib exposure under conditions with the highest risk of an interaction.

An adaptive 5-parameter Bayesian logistic regression model (BLRM) with escalation with overdose control (EWOC) guided the dose-finding of each combination [18]. The EWOC principle only recommends doses for which the risk of overdosing (true DLT rate >0.35) is <25% for the next dose level. DLTs were defined as AEs or abnormal laboratory values considered to be unrelated to disease, disease progression, inter-current illness, or concomitant medications that occurred within the first cycle of treatment and met any of the criteria listed in Supplementary Table 1. AEs that did not meet the criteria within Supplementary Table 1 but led to a dose interruption of alpelisib for >7 consecutive days, or paclitaxel for ≥2 consecutive doses within Cycle 1, or between Cycle 1 and Cycle 2 Day 1, were also defined as DLTs. Available data were analyzed after Cycle 1 per cohort of patients to decide the dose for the next cohort and/or determine the MTD/RP2D. MTD estimation was based on the dose-dependent incidence rate of DLTs in Cycle 1 for patients of the DDS using the BLRM with EWOC principle.

AUCinf: Area under the curve from time zero to infinity

VD, YH, and CW contributed to the study design and conception. JR, GC, J-P D, WH, AA and TB were involved with the acquisition of the data. YH was the trial statistician. YH and CW were responsible for the quality control of data and algorithms. All authors contributed substantially to the analysis and interpretation of data. All authors were involved in drafting and revision of the manuscript, and all provided approval of the final, submitted version of the manuscript.

We thank the patients who took part in this study and their families, as well as the investigators, research coordinators, and staff at each study site. We also thank Nicholas Crabb, MSc, and Cassandra Krone, PhD, (Articulate Science) for medical editorial assistance with this manuscript.