The incidence of melanoma is approx. 0.93 per 100,000 in Japan, and the incidence in Australia and the U.S. is 45 per 100,000 and 22 per 100,000, respectively [1]. Melanoma represents approx. 4% of all cancers in the U.S., and it was estimated that 59,580 melanomas were newly diagnosed in 2005 [2]. Although early-stage melanoma can be curatively treated by a surgery alone [3], most melanoma cells spread rapidly and quickly reach the advanced stage with distant metastases. The prognosis of patients with malignant melanoma is thus extremely poor because of the frequent metastases to distant organs such as lung and lymph nodes. Molecular-targeted therapy based on the characterization of the metastasis of melanoma is thus desirable.

There are clinical reports that distant metastases developed immediately after the removal of primary melanomas [4, 5], suggesting that the metastatic process might be controlled by the primary tumor. The potential of a primary melanoma to inhibit the development of distant metastases has also been discussed based on experimental evidence [6–8]. Kirstein et al. reported that the presence of B16F10 melanoma cells significantly restricted the numbers and sizes of experimental lung metastases [6]. Kubo et al. reported that B16 primary tumors inhibited the development of secondary B16 tumors in the lung and in the peritoneum and suppressed the experimental metastases of E0771 breast cancer cells to lung [7]. Hanniford et al. reported that the microRNAs miR-382 and miR-516b in primary melanoma suppress the invasion and metastasis of melanoma cells [8]. 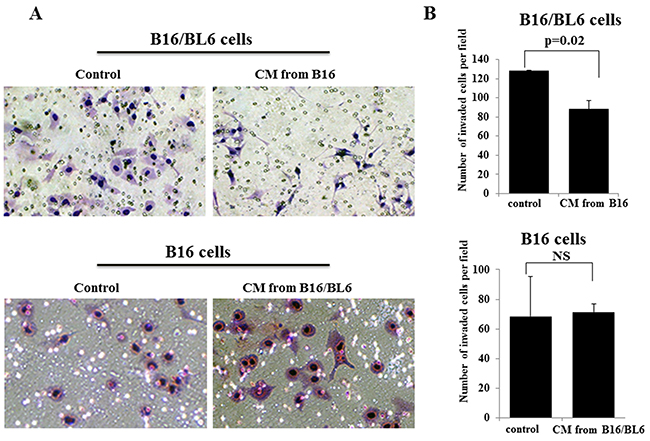 Figure 2: Effect of CM on the morphology of B16/BL6 cells. The CM from B16 changed the shape of the B16/BL6 cells from bipolar to multipolar. 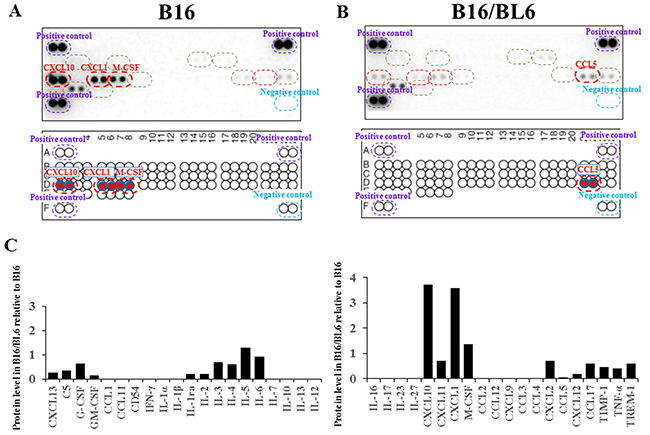 Effect of cytokines on the invasion ability of B16/BL6 cells 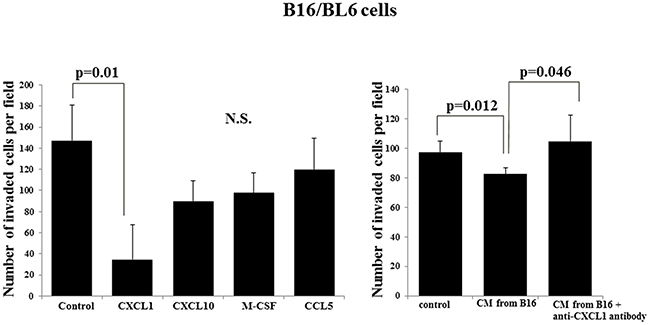 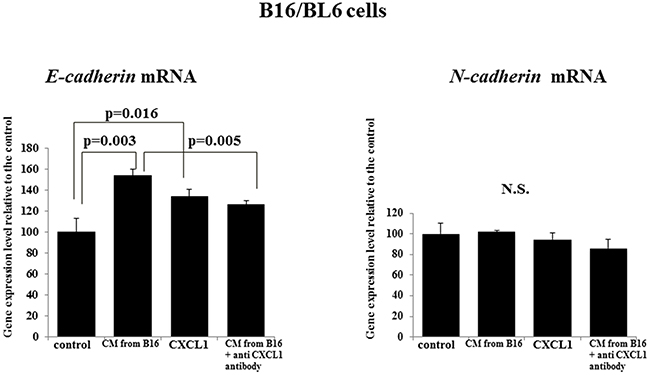 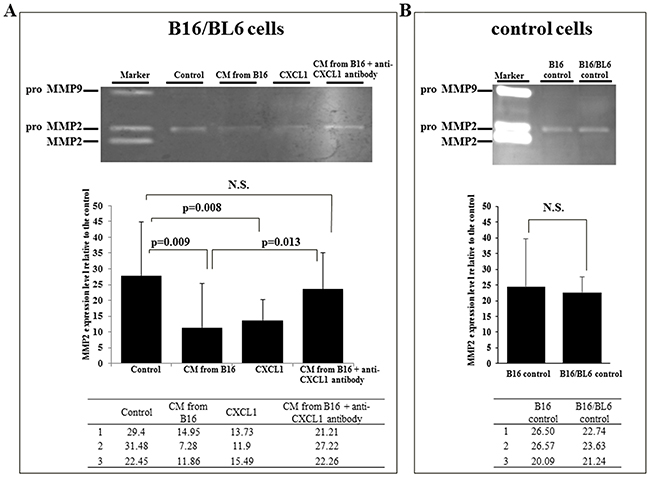 The difference in production levels between a primary tumor and a metastatic tumor might be associated with the cell-cell interaction in the invasion process. In this study, the B16 melanoma cells produced different levels of CXCL1, CXCL10, M-CSF, and CCL5 compared to the B16/BL6 cells. Among these cytokines, only CXCL1 showed the invasion-inhibitory activity of B16/BL6 cells. It was reported that CXCL1 is increased in malignant melanoma cells and is involved in the metastasis of malignant melanoma [9, 10]. The production level of CXCL1 differs among human melanoma cell lines [11]. Our present findings suggest that CXCL1 from the primary tumor controlled the behavior of metastatic cancer cells in a paracrine manner.

CXCL1 and the CM from B16 increased the E-cadherin mRNA and decreased the MMP2 level of B16/BL6 cells. The up-regulation of E-cadherin expression was reported to inhibit the invasive ability of B16/BL6 cells [12] and B16F10 cells [13]. It was also reported that the suppression of MMP2 inhibited the invasion ability of B16F10 cells [14]. These findings suggested that CXCL1 in conditioned medium from B16 might inhibit the invasion ability of B16/BL6 cells by an up-regulation of E-cadherin and a down-regulation of MMP2. In contrast, the MMP2 level was not different between B16 cells and B16/BL6 cells, suggesting that the invasion potential might not be different between the B16 cells and B16/BL6 cells. CXCL1 from primary melanoma cells, B16, might inhibit the MMP2 activity of metastatic melanoma cells, B16F10. The molecular mechanisms clarified in the present study indicate that the CXCL1 signal might be a beneficial target for the development of a novel therapy against melanoma.

The conditioned medium from B16 cells affected the morphologic features of B16/BL6 cells, changing the cells’ shape from bipolar to multipolar. E-cadherin facilitates the morphology of tumor cells. The multipolar shape might be a feature of mesenchymal-epithelial transition. It has been reported that the morphological changes elongating with long and slim pseudopodia-like protrusions inhibit the migration and invasion abilities of melanoma cells, B16F10 cells [15]. The multipolar shape of B16/BL6 cells by CM from B16 might be associated with the pseudopodia-like protrusions.

In conclusion, our study indicates that primary melanoma cells might down-regulate the invasion activity of metastatic melanoma cells through CXCL1 signaling.

We prepared the conditioned medium (CM) from B16 cells and from B16/BL6 cells as follows. To obtain CM, semi-confluent B16 and B16/BL6 cells in 100-mm plastic dishes were washed with phosphate-buffered saline (PBS; Wako) and incubated for an additional 3 days in 5 ml of serum-free DMEM. The supernatant was collected and stored as CM at -20°C until use. All experiments were performed in medium containing 1.5% FCS. As a control, DMEM was used instead of CM.

The proliferation of B16 cells and that of B16/BL6 cells were determined by a 3- (4,5-dimethylthiazol-2-yl)-2,5-diphenyltetrazolium bromide (MTT) assay. Cells were seeded at 1×103 per well in 96-well plates with the CM and incubated for 72 hr. Subsequently, 100 μl of culture medium and 20 μl of MTT solution (Promega, Tokyo) were added to each well, and the absorbance at 570 nm was analyzed using a microplate reader (Bio-Rad 550; Bio-Rad, Tokyo).

We used CXCL1, CXCL10, macrophage colony-stimulating factor (M-CSF), CCL5 anti-CXCL1-neutralizing antibody, all of which were purchased from Wako.

The in vitro invasiveness of cells was measured by a two-chamber Matrigel invasion assay. We used a chamber (Falcon) with an 8-μm-pore membrane filter coated with 50 μg of Matrigel (upper chamber) in a 24-well culture plate (lower chamber). B16/BL6 cells (2.5×104 cells/500 μl /chamber) were seeded in the upper chamber, and 500 μl CM from B16 at a final concentration of 50 % CM with or without anti-CXCL1-neutralizing antibody (500 ng/ml), CXCL1 (10 ng/ml), CXCL10 (10 ng/ml), M-CSF (10 ng/ml), or CCL5 (10 ng/ml) was added to the low chamber. After incubation for 24 hr, B16/BL6 cells that invaded through the membrane were stained by Diff-Quick (Sysmex, Kobe, Japan) and were manually counted under a microscope at ×200 magnification. Six randomly chosen fields were counted, and the mean of the six fields was calculated as the sample value.

B16/BL6 cells were seeded and incubated for 7 days in the presence of 50% CM from B16 with 1.5% FBS. The morphology of the B16/BL6 cells was then observed under a light microscope.

The cytokine production from B16 cells and that from B16/BL6 cells were examined using the Mouse Cytokine Array Panel A (R&D Systems, Minneapolis, MN) according to the manufacturer’s protocol. CM from each cell line was mixed with a cocktail of biotinylated detection antibodies. After the streptavidin-horseradish peroxidase and chemiluminescent detection reagents were added, the chemiluminescence signal was evaluated.

A total of 1×105 B16/BL6 cells were cultured under the respective conditions for 24 hr. After the extraction of mRNA from B16/BL6 cells, cDNAs were synthesized with ReverTra Ace qPCR RT Master Mix (Toyobo, Osaka, Japan). Relevant cDNA was amplified by PCR with Taq DNA polymerase (Nippon Gene, Tokyo) in a thermal cycler, with 40 cycles used for each of the three repeated steps. Primers for E-cadherin: Forward 5′-CGAGAGTCAGCCTTTAACGAAATG-3′ Reverse 5′-GGTCTTCCATTACGGAGAGATCC-3′, N-cadherin; Forward 5′-CGAGAGTCAGCCTTTAACGAAATG-3′ Reverse 5′-GGTCTTCCATTACGGAGAGATCC-3′, customized from Sigma-Aldrich (St. Louis, MO). E-cadherin and N-cadherin were electrophoresed with agarose gels, and the expression levels of E-cadherin and N-cadherin were measured. All quantitative RT-PCRs were done in triplicate.

A total of 1×105 B16/BL6 cells/well were cultured under the respective conditions for 5 days. The protein was extracted from the cells. A gelatin-zymography kit (Cosmo Bio, Tokyo) was used to measure matrix metalloproteinases 2 (MMP2) and MMP9. A total of 10 μg of protein was added with sample buffer without reducing agent and then subjected to sodium dodecyl sulfate-polyacrylamide gel electrophoresis (SDS-PAGE) with a gel containing 0.1% gelatin. After electrophoresis, the gel was incubated in substrate buffer and then stained with Coomassie blue. The intensity of the bands was determined on a computerized densitometer LAS 3000 densitometer (GE Healthcare Life Sciences, Piscataway, NJ). Gelatin zymography was carried out three times.

Data are expressed as mean ± SD, and differences in data were analyzed using the unpaired Student’s t-test. P-values <0.05 were accepted as significant.

There are not any financial or other interests with regard to the submitted manuscript that might be construed as a conflicts of interest.