Background: Developing multiple cancers is an indicator of underlying hereditary cancer predisposition, but there is a paucity of data regarding the clinical genetic testing outcomes of these patients.

Methods: We compared cancer index patients with ≥2 primary malignancies versus 1 primary cancer who underwent clinical evaluation and testing with multi-gene panels comprising up to 49 genes from 1998-2016.

Conclusion: Patients with multiple cancers were more likely to carry pathogenic mutations than those with single cancer. About three-quarters of deleterious mutations in patients with multiple primary cancers were in BRCA1/2 and the mismatch repair genes, but multi-gene panel testing facilitated the detection of mutations in another 6 genes and is warranted in this high-risk population.

Amongst the 231 patients with multiple primary cancers, majority (205/231, 88.7%) had two primary malignancies (Figure 1). The most common cancer pairs were bilateral breasts (n = 77), breast and ovary (n = 24), endometrium and ovary (n = 19), colon and endometrium (n = 8), multiple colon (n = 7), breast and endometrium (n = 5), breast and colon (n = 5), colon and ovary (n = 5), and others (n = 55). Twenty-three patients (9.9%) had 3 cancers, with the most common being a combination of breast and ovarian cancers (n = 7), and multiple synchronous or metachronous colon primaries (n = 3). One patient had 5 primary cancers originating from 5 different organs (breast, lung, colon, skin, pancreas) (Table 2). The most common primary suspected cancer syndromes were hereditary breast and ovarian cancer syndrome (53.7%) and Lynch Syndrome (33.3%) in patients with multiple primary cancers. 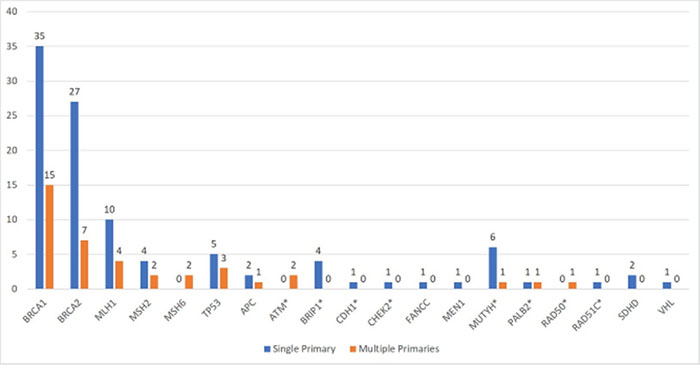 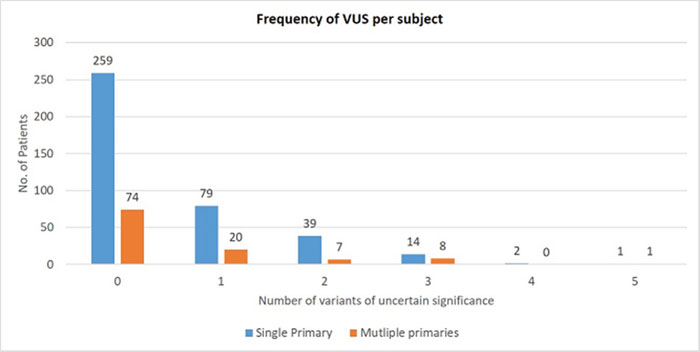 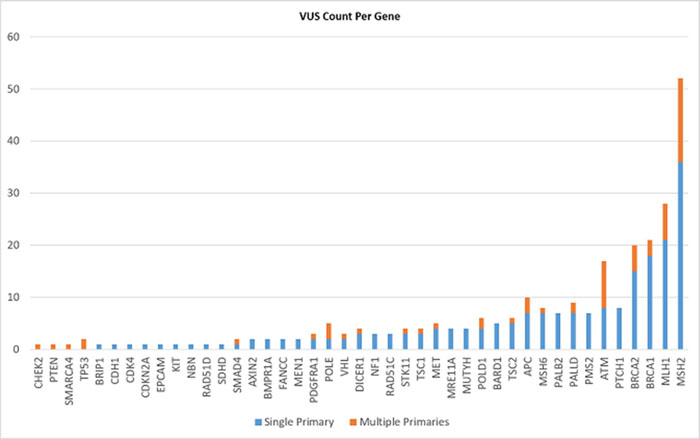 Compared to patients with single primary cancers, those with multiple primary cancers had a slightly older median age at first cancer diagnosis (46 vs. 42 years), were more likely to be Chinese (75.8% vs. 65.7%) and were less likely to have family history of cancer related to the primary suspected syndrome (56.7% vs. 62.0%).

Table 3: Factors that correlate with the identification of pathogenic mutations (n = 504)

*Note: mutations in patients with >2 cancers reported in Table 2; NR: Not recorded.

In our study, the most common cancer pairs were bilateral breasts, breast/ovary, endometrium/ovary, and colon/endometrium. These findings reflect the cancer patterns in Singapore, where colon cancer is the most common cancer among males, while breast, colon, ovarian, and endometrial cancers are among the top 5 cancers among females, in Singapore [7]. In comparison, in a European series of more than 200 patients with multiple primary cancers, the most common cancer pairs were breast/ovary and colon/endometrium. Similar to our study, half the patients in the European cohort underwent genetic testing, mostly targeted gene testing, and 40% were found to have a pathogenic variant [8]. Deleterious mutations were most frequently identified in mismatch repair genes (18.9%) and BRCA1/2 genes (14.4%); other genes with deleterious mutations were PTEN, RB1, APC and MUTYH (homozygous), occurring in 6.3% of the cohort. In comparison, in our study, overall, 37% of patients with multiple primary cancers who underwent multi-gene panel testing were found to carry pathogenic mutations; 24% had mutations in the mismatch repair and BRCA1/2 genes, while 13% had mutations in other cancer predisposition genes - more than two times than in the European study. The wider use of multi-gene panel testing in our cohort likely contributed to this finding. Furthermore, patients referred to the cancer genetics clinic represent a high-risk population that may have been further selected based on age and family history, in addition to personal history of multiple primary cancer. This ascertainment bias could be another reason why more than one-third of our patients with multiple primary cancers was found to carry deleterious mutations; this high incidence of deleterious mutations may not necessarily be representative of an unselected population with multiple primary cancers.

Several other groups outside Asia have reported their experience of panel testing in patients who initially test negative for BRCA1/2, identifying pathogenic variants in other moderate penetrance breast cancer genes in 7 – 10% of their cohorts, although most of these cohorts included only a minority of patients with multiple primary cancers [9–12]. Within Asia, a South Korean study of 235 patients at high-risk for hereditary breast cancer and were confirmed not to have a BRCA1/2 mutation were tested with massively parallel sequencing, and 3.6% were found to have pathogenic germline mutations in CHEK2, PALB2, MRE11 and RAD50 [13]. Again, only a small minority of this cohort (5%) had multiple primary cancers. The wider availability and reducing cost of NGS-based multi-gene panel testing has led to increasing use of multi-gene panel testing for hereditary cancer syndrome in the clinic, in turn resulting in the rise in diagnosing cancer syndromes originating from other moderate to high penetrance cancer predisposition genes outside the mismatch repair and BRCA1/2 genes. Multi-gene panel testing has the advantage of casting the net wider to improve the chance of diagnosing pathogenic mutations and could be advantageous in patients with multiple primary cancers and family histories suggestive of more than one hereditary cancer syndrome. For instance, in our cohort, a patient with a personal history of breast cancer at age 50, parathyroid malignancy at age 60 and endometrial cancer at age 61 and who has family history of breast, uterine and colon cancer had a primary suspected diagnosis of Lynch syndrome, while hereditary breast cancer syndrome and Cowden Syndrome were differential diagnoses. Multi-gene panel testing revealed no mutations in the mismatch repair, BRCA1/2, or PTEN genes but a deleterious frameshift mutation in RAD50, a moderate penetrance breast cancer gene. Nonetheless, although the panel used at our center comprises up to 49 genes, pathogenic variants have so far only been found in 19 genes, suggesting perhaps a more selective panel may be equally efficient.

One inevitable by-product of multi-gene panel testing is the higher frequencies of VUS. It is well-established that the number of VUS directly correlates with the number of genes included on panels and the rates reported vary between 12 – 88% in the literature [17, 18]. Rates of VUS also vary amongst different ethnicities and are known to be highest among individuals with Asian ancestry due to low proportion of Asians included in reference databases [19], and our data reflects this. One third of our entire cohort had at least one VUS, although there was no significant difference in VUS rates between patients with multiple versus single primary cancers, or between different Asian ethnic groups. However, multi-gene panel testing was two times more likely to yield VUS compared to targeted gene testing. The identification of VUS can be associated with significant anxiety and may result in inappropriate implementation of management strategies that should be reserved for mutation carriers. This belies the importance of a cancer genetics clinic to provide adequate pre- and post-test counselling to this group of patients.

We studied all cancer index patients who have been referred to the cancer genetics clinic at the National University Cancer Institute, Singapore (NCIS) from 1998 to 2016. All cancer index patients had an a priori risk of ≥10% of having a hereditary cancer predisposition and received pre-test genetic counseling. The risk prediction models used for primary suspected syndrome were – Couch or PENN II models for hereditary breast and ovarian cancer syndrome; Amsterdam criteria, PREMM, or Bethesda for Lynch syndrome; and the Chompret’s or Eeles Criteria for Li-Fraumeni syndrome [20–26]. Clinical information including personal and three-generation family cancer histories, cancer type and histology were retrieved from the clinic databases. The study was approved by the Institution Ethics Review Board and informed consent was obtained from each participant.

We would like to thank our patients and their families for participating in this study.