The Hippo signaling pathway is a central regulator of organ size, tissue homeostasis, and tumorigenesis. KIBRA is a member of the WW domain-containing protein family and has recently been reported to be an upstream protein in the Hippo signaling pathway. However, the clinical significance of KIBRA deregulation and the underlying mechanisms by which KIBRA regulates breast cancer (BC) initiation and progression remain poorly understood. Here, we report that KIBRA knockdown in mammary epithelial cells induced epithelial-to-mesenchymal transition (EMT) and increased cell migration and tumorigenic potential. Mechanistically, we observed that inhibiting KIBRA induced growth factor-independent cell proliferation in 2D and 3D culture due to the secretion of amphiregulin (AREG), an epidermal growth factor receptor (EGFR) ligand. Also, we show that AREG activation in KIBRA-knockdown cells depended on the transcriptional coactivator YAP1. Significantly, decreased expression of KIBRA is correlated with recurrence and reduced BC patient survival. In summary, this study elucidates the molecular events that underpin the role of KIBRA in BC. As a result, our work provides biological insight into the role of KIBRA as a critical regulator of YAP1-mediated oncogenic growth, and may have clinical potential for facilitating patient stratification and identifying novel therapeutic approaches for BC patients.

Breast cancer (BC) is the second leading cause of death in women in the United States and is the most common cancer that affects women. Knowledge of the underlying mechanisms of BC progression and metastasis has increased considerably throughout the past 10 years. Pathways and protein interactions that drive this disease are continually being identified and characterized; however, the key signaling nodes remain elusive [1].

The Hippo signaling pathway was first identified in Drosophila melanogaster and controls cell proliferation, apoptosis, and organ size [2, 3]. This pathway is necessary for normal tissue growth and organ size control, and disruptions/aberrations in Hippo signaling are involved in tumorigenesis [4, 5]. In breast cancer, deregulation of Hippo signaling can drive progression through the activation of its effector molecules YAP1 (Yes-associated protein 1) and TAZ (transcriptional co-activator with PDZ binding motif) [4]. The nuclear translocation of YAP1 and TAZ is associated with increased breast cancer progression, metastasis, epithelial-to-mesenchymal transition (EMT), epithelial stem cell regeneration, and therapeutic resistance [6]. The tight regulation of this pathway ensures the precise control of cell cycle progression and apoptosis. Upon activation by various external stimuli, Hippo signaling induces a serine-threonine kinase cascade [7]. In mammals, MST1/2 (mammalian Ste20-like serine/threonine kinase 1/2) is phosphorylated, as are LATS1/2 (large tumor-suppressor kinase 1/2) upon interaction with SAV1 [3]. In combination with non-receptor tyrosine phosphatase (PTPN14) and KIBRA, LATS1/2 phosphorylate the key effectors of Hippo signaling, YAP1 and TAZ [8, 9]. Phosphorylated YAP1/TAZ interact with the 14-3-3 proteins, sequestering YAP1/TAZ in the cytoplasm [10–12]. β-TrCP is recruited to phosphorylated YAP/TAZ, which prompts their ubiquitination and subsequent proteasome degradation [13].

In humans, impaired Hippo signaling has been reported for several types of cancer. In line with this observation, components of the Hippo pathway are frequent targets of aberrant gene regulation and epigenetic silencing in BC [4]. Nonetheless, while the oncogenic functions of YAP1/TAZ are well established, many upstream regulators of this signaling cascade remain elusive. KIBRA (also known as WWC1) was initially discovered in 2003 in a yeast two-hybrid screen and was found to contain two amino-terminal WW domains: an internal C2-like domain and a carboxy-terminal acid-rich stretch [14]. The WW domain of KIBRA recognizes the PPxY motif (P, proline; Y, tyrosine; and x, any amino acid) and mediates interactions with proteins containing this motif [15]. KIBRA has been shown to exert its tumor suppressive effects through interaction with Merlin and Expanded, two upstream regulators of Hippo signaling [16–18]. LATS1 was recently shown to be activated independently by KIBRA and PTPN14 and cooperatively by the KIBRA/PTPN14 complex [8]. Notwithstanding these findings, little is known about the detailed molecular mechanisms linking KIBRA to the regulation of the Hippo pathway and tumorigenesis. Thus, the mechanisms of the tumor suppressor function of KIBRA need to be understood from a therapeutic standpoint and may provide additional insights into treatment.

In this study, we reveal that the loss of function of KIBRA in MCF10A mammary epithelial cells induced EMT, anchorage-independent growth and growth factor-independent cell proliferation in 2D and 3D culture. Mechanistically, the downregulation of KIBRA induced epidermal growth factor receptor (EGFR) activation by promoting the expression of the EGFR ligand amphiregulin (AREG). Furthermore, we demonstrated that AREG activation by KIBRA loss of function is dependent on YAP1.

We previously demonstrated that KIBRA interacts with PTPN14 and synergistically activates LATS1 and inhibits YAP1 oncogenic function [8]. To further understand the functional role of KIBRA in breast cancer, we knocked down KIBRA in MCF10A mammary epithelial cells using RNAi. The transduction of two independent shRNA constructs into MCF10A cells led to a significant reduction in KIBRA expression (Figure 1A). Consistent with a previous report [19], we observed that KIBRA knockdown caused a transition from an epithelial-like cell morphology to a mesenchymal-like cell morphology (Figure 1B); this finding indicated that the loss of KIBRA function induced EMT. Correspondingly, we detected increased migration (Figure 1C) and soft agar colony formation (Figure 1D) of KIBRA-knockdown cells in vitro. Together, these data suggest that the loss of KIBRA causes mammary epithelial cell transformation. 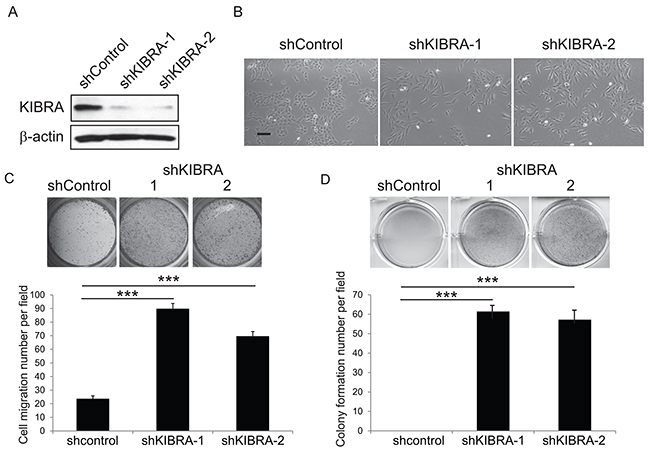 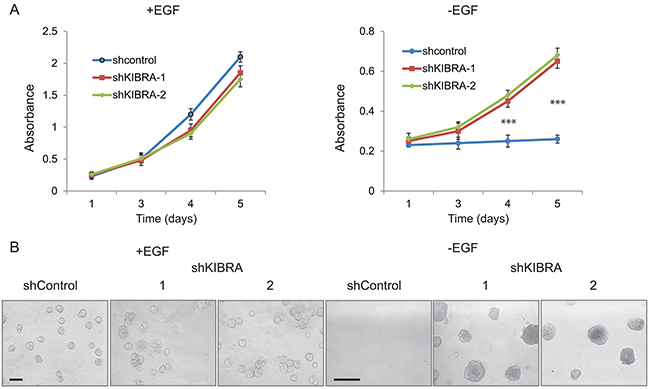 KIBRA knockdown induces the secretion of AREG, an EGFR ligand 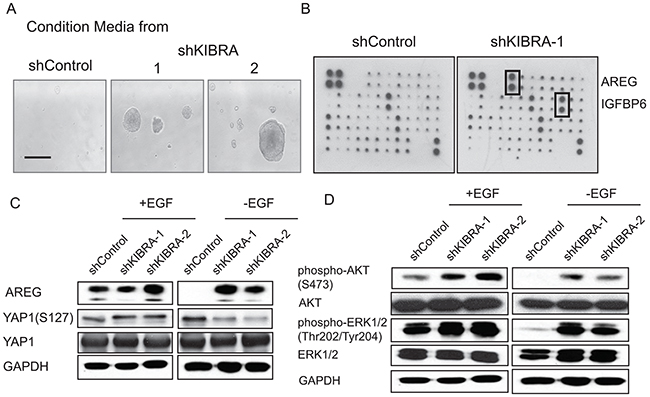 AREG is a known ligand of EGFR and can drive downstream signaling pathways [23]. To determine whether PI3K-AKT and MAPK-ERK signaling are activated in KIBRA-knockdown cells, we detected AKT and ERK activation by immunoblot. We observed an increase in p-AKT and p-ERK levels in shKIBRA cells in the absence of EGF; these results indicated the activation of PI3K-AKT and MAPK-ERK signaling in KIBRA-knockdown cells (Figure 3D). 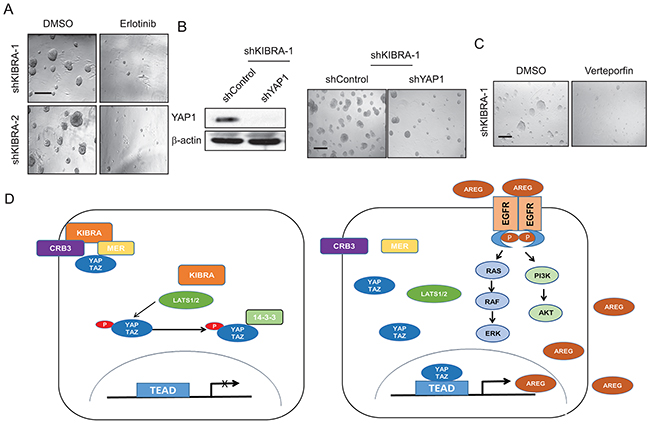 Finally, to investigate whether our findings have clinical relevance, the correlation between the relative mRNA expression levels of KIBRA, and important clinicopathological features were examined by univariate Kaplan-Meier analyses (Methods). A positive association between decreased KIBRA expression and both reduced median overall survival (OS) and reduced relapse-free survival (RFS) within five years of diagnosis was observed using several independent patient datasets (Figure 5). In agreement with these findings, a separate multivariate analysis of prognostic factors with a Cox proportional-hazards model confirmed that low KIBRA expression was a robust predictor of poor survival in BC and remained significant when adjusting for other prognostic factors, such as histological type and tumor grade. 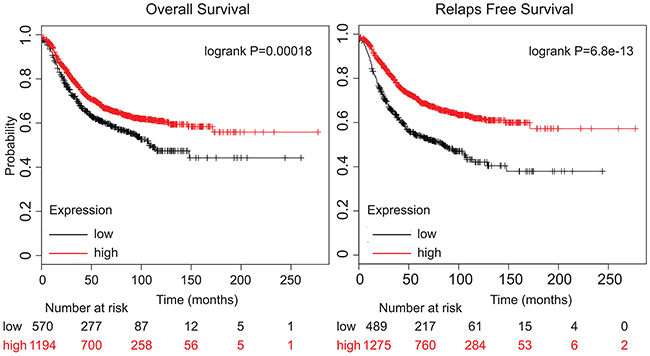 KIBRA is a signal transduction protein that was initially determined to be expressed mainly in the kidney and brain [24]. Genetic screens in Drosophila revealed that KIBRA forms a complex with Merlin and Expanded, the upstream components of the Hippo signaling pathway, and thus phosphorylates Yorkie (Yki) to inhibit its activity [16–18]. In mammalian cells, KIBRA interacts directly with LATS1/2 and is independent of MST1/2 [9]. We previously reported that KIBRA and PTPN14 form a complex that regulates LATS1 function [8]. In addition, it has been recently reported that the apical-basal polarity protein CRB3 interacts and stabilize KIBRA in mammary epithelial cells [25]. The mammalian KIBRA/WWC1 protein contains another two similar proteins (WWC2 and WWC3) [26]. It has been reported that the WWC genes are differentially regulated in a tissue-specific manner [27]. Similar to KIBRA, both WWC2 and WWC3 capable activate LATS1/2 and negatively regulate YAP1 oncogenic functions [27–30].

In this study, we demonstrate that losing KIBRA function activates EGFR signaling through the YAP1-dependent activation of AREG. Furthermore, we show that decreased KIBRA expression correlates with reduced BC patients’ OS and RFS. Notably, during the period our manuscript was under review, it was reported that luminal BC patients with endocrine therapy and KIBRA-low expression had an RFS disadvantage over those who were positive for KIBRA [39]. Accordingly, the correlation between expression of WWC2/WWC3 and clinical features of breast cancer must be further determined. Nonetheless, using genetic testing, it may be possible to assess the malignant progression of breast cancer based on KIBRA expression levels. Moreover, this approach might enable early intervention in breast cancer patients and provide novel therapeutic avenues for breast cancer treatment.

MCF10A cell was previously received from Dr. Joan Brugge’s lab [21] and has been recently authenticated by STR profiling and test for mycoplasma contamination. The cell culture was performed as described previously [40, 41]. Briefly, MCF10A cells were grown in DMEM/F12 medium (Corning CellGro; NY) supplemented with 5% horse serum (Invitrogen; MA), 20 ng/ml EGF (ProSpec; NJ), 0.5 μg/mg hydrocortisone, 100 ng/ml cholera toxin, and 10 μg/ml insulin (Sigma; MO). For EGF-independent cell growth experiments, cells were plated and maintained in growth media for 24 h before being washed with PBS and incubated in assay media (complete MCF10A growth media without EGF). All cells were cultured in a humidified atmosphere of 95% air and 5% CO2 at 37°C.

shKIBRA constructs were generated in the pLKO.1 vector at the AgeI/EcoRI sites. Lentiviral packaging and the transient transfection of 293T cells were performed as described previously [42].

Soft agar assays were performed as previously described [42]. Briefly, 2.0 mL of 0.5% agarose (Sigma-Aldrich; MO) was plated in 6-well plates as the base layer; 50,000 shControl or shKIBRA cells were suspended in 1.5 mL of 0.4% agarose and were plated on top of the base layer. Anchorage-independent growth was assessed by counting the colonies after two weeks of growth. All soft agar assays were repeated in at least three separate experiments.

MCF10A 3D acini formation assays were performed as previously described [40, 41]. Briefly, 4.0x103 shControl-transduced (control) or shKIBRA lentiviral-transduced MCF10A cells after puromycin selection for 72 hours were plated in 3D culture chambers and cultured with assay media in 5% growth factor-reduced Matrigel (#354230; Corning; MA) in presence of 5ng/ml EGF or absent of EGF. Assay media was replaced every 4 days. The assays were repeated in 3 independent experiments. Verteporfin was purchased from Fisher Scientific (53-051-0), and erlotinib was purchased from LC Laboratories (E-4007).

Cells were plated in 3D culture chambers as described previously [41]. Every 4 days, fresh conditioned media from shControl or shKIBRA cells was harvested and applied to normal MCF10A cells. Images were taken 20 days after the first treatment with conditioned media. The assays were repeated in 3 independent experiments.

15. Einbond A, Sudol M. Towards prediction of cognate complexes between the WW domain and proline-rich ligands. FEBS Lett. 1996; 384:1–8.