Background: Osimertinib is an essential drug to treat non-small-cell lung cancer (NSCLC) harboring the epidermal growth factor receptor (EGFR) T790M mutation, and rebiopsy is necessary to detect this mutation. However, the significance of repeat rebiopsy in NSCLC patients whose first rebiopsy was T790M-negative remains unclear. We used a retrospective cohort to clarify this issue.

Results: Of 102 patients with EGFR-mutant NSCLC, 55 underwent rebiopsy after acquired resistance to prior EGFR TKIs. Pre-existing activating EGFR mutations were found in all 55 rebiopsied samples. Of the 55 samples, 25 were T790M-positive (45%). Among the remaining 30 patients (T790M-negative on the first rebiopsy), 21 underwent additional rebiopsies following interval therapy. Of the 21 patients, 11 were T790M-positive on the second rebiopsy and 1 on the third. We also evaluated the efficacy of osimertinib in patients who needed a repeat rebiopsy to detect the T790M mutation. Osimertinib showed good activity with an objective response rate of 50%.

T790M-positive patients can expect prolonged inhibition of tumors during treatment with osimertinib, whereas treatment options are limited for T790M-negative patients. Most T790M-negative patients receive chemotherapy or best supportive care, depending on their condition. However, the ORR of chemotherapy is only 20% in contrast to that of osimertinib [7]. These findings imply that the presence of T790M has a great impact on the subsequent clinical course of patients, leading to better outcomes. However, the significance of repeat biopsies in patients with NSCLC who are T790M-negative on an initial rebiopsy is unclear. In addition, assuming that rebiopsy finds additional T790M-positive patients, the efficacy of osimertinib in such patients remains unclear.

These unresolved questions prompted us to investigate whether multiple rebiopsies following some interval could detect additional T790M-positive NSCLC patients and whether osimertinib would be effective in such patients.

Among 102 patients with EGFR-mutant NSCLC treated with EGFR TKIs, 55 who underwent at least one rebiopsy to detect the T790M mutation were included in the analysis. The patients’ characteristics are summarized in Table 1. Their median age was 66 years (range, 41–85 years), and female patients were dominant. All patients had adenocarcinoma histology. In total, 35 patients had the EGFR exon 19 deletion and 20 had the exon 21 L858R point mutation.

Frequency of the secondary T790M mutation

Figure 1 presents a flow chart of the patients included in this study. 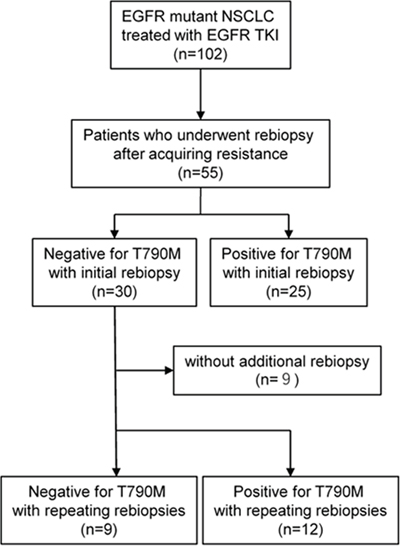 Among the total of 102 patients, 47 had no successfully obtained rebiopsy sample (31 without progression, 9 with progression before clinical approval of osimertinib, 6 unsuccessful tissue rebiopsies or no targetable lesion, and 1 excluded for sequential osimertinib due to drug-induced pneumonitis caused by prior EGFR TKI).

The rebiopsied sites are summarized in Figure 2. In total, 42% of first rebiopsies were performed on pulmonary lesions, followed by blood biopsy, and lymph-node biopsy, while the frequency of pleural or pericardial effusion increased in the second/third rebiopsies. Because fewer incidents of T790M in central nervous system lesions are reported [8, 9], we determined the T790M incidence using cerebrospinal fluid; only one T790M patient was found using cerebrospinal fluid. T790M incidence, detected using cerebrospinal fluid and other samples, was 0/3 and 25/52 in the first rebiopsy, and 1/2 and 11/21 in the 2nd/3rd rebiopsy, respectively. We also explored whether any patients were T790M negative using a blood-based assay during the first rebiopsy and T790M positive using a tissue-based assay during the second or third rebiopsy. No patient was blood-negative and tissue-positive, implying that the T790M-positive repeated rebiopsy results in this cohort were not caused by lower sensitivity of the blood-based assay. 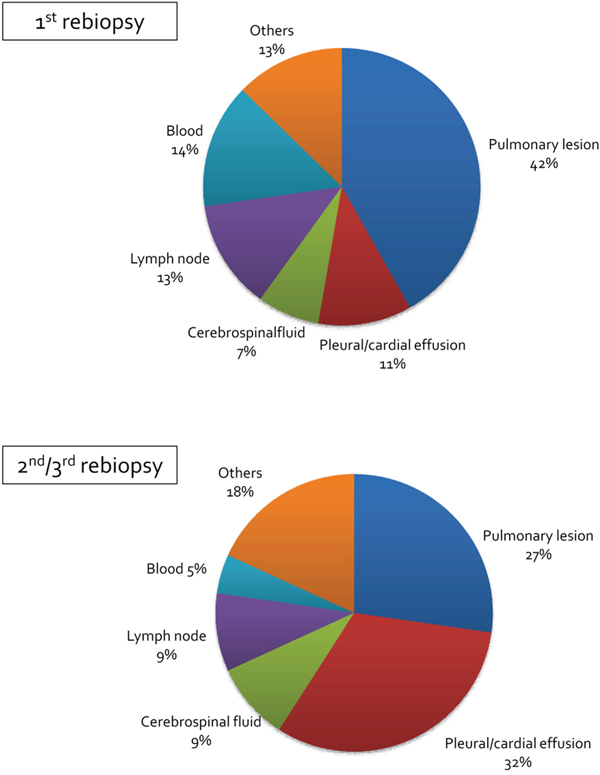 Figure 2: Rebiopsied lesion. Each pie chart shows the lesion where a rebiopsy was performed. 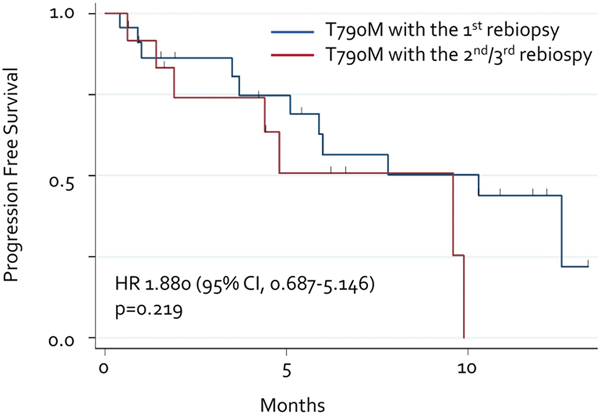 Table 3: Characteristics of the patients with the T790M mutation detected by repeat biopsy

It remains unclear why the T790M mutation was found in a repeat biopsy in patients who were T790M-negative on the first rebiopsy. T790M might have been acquired de novo between the rebiopsies [10]. Actually, five of the twelve patients who needed an additional rebiopsy to detect the T790M mutation received EGFR TKI therapy between rebiopsies. A sub-population harboring the T790M mutation might have been selected for interval EGFR TKI therapy. However, the remaining seven patients did not receive any EGFR TKI in the rebiopsy interval. Given that patients treated with medications other than EGFR TKIs are unlikely to select or develop the T790M mutation, de novo-acquired T790M does not explain those patients. Another explanation is tumor heterogeneity [11]. Many data imply intra- and inter-tumor heterogeneity, and that tumors are genetically heterogeneous even within a patient. Five of twelve patients received a repeat rebiopsy at a different site from the first one (Table 3). There may have been inter-tumor T790M heterogeneity between the first rebiopsied site and the repeat site in those patients. Intra-tumor heterogeneity could have existed in the seven patients who underwent rebiopsies from the same lesion (Table 3).

This study has some limitations. This study retrospectively analyzed heterogeneous data with a small sample size, meaning that the results are more speculative and not definitive. This issue could have biased the present findings, so our results should be interpreted cautiously.

To detect the T790M mutation, we retrospectively reviewed the medical records of all patients with NSCLC and EGFR mutations who received a rebiopsy at the Department of Respiratory Medicine at Okayama University Hospital, Okayama, Japan, between January 2015 and January 2017. This study was approved by the Institutional Review Board of Okayama University Hospital (no. 1703-049).

Rebiopsies without histological and cytological confirmation of malignancy were not excluded from the analysis. All types of rebiopsy were included in the analysis, including bronchoscopic biopsy, surgical biopsy, cerebrospinal /pericardial/pleural puncture, and liquid biopsy from blood samples.

Responses were re-evaluated in this study by two investigators, according to the Response Evaluation Criteria in Solid Tumors, version 1.1.

PFS was defined as the period from the beginning of treatment to the day of disease progression or death from any cause using the Kaplan–Meier method. Groups were compared using the log-rank test. Significance was determined at a level of p < 0.05.

This study had no financial support.