Introduction: M2-polarized tumor-associated macrophages (TAMs) and TIE2-expressing monocytes (TEMs) are associated with angiogenesis and have been identified as a potential prognostic marker in several solid tumors, including hepatobiliary malignancies. However, little is known regarding their influence on tumor progression and patient survival in pancreatic ductal adenocarcinoma (PDAC).

Conclusions: Presence of M2-polarized TAMs and TEMs is associated with a decreased overall and recurrence-free survival of patients with PDAC.

Materials and methods: The localization and density of CD163+ M2-polarized TAMs and TEMs were quantified in the tumor central area (TCA) and tumor-infiltrating front (TIF) in human PDAC tissue (n = 106) and correlated to clinicopathological characteristics, tumor recurrence rates and patient survival. In parallel, tumor microvascular density (MVD) and the density of angiopoietin-positive tumor cells were quantified. Statistical analysis was performed using SPSS software.

Solid cancers harbor different subpopulations of immune cells, each of which has the potential for pro- or anti-tumor functions. Macrophages are the predominant immune cell population found throughout tumors and macrophage numbers or functions can be modulated in order to augment anti-cancer therapies [1]. The immune activation state of these tumor-associated macrophages (TAMs) can be divided into M1- (anti-cancer function) and M2-type (pro-tumoral or immunosuppressive) [2]. Various escape mechanisms deployed by malignant cells and the tumor microenvironment (TME) mediate the conversion of infiltrating macrophages into immunosuppressive and pro-tumoral M2 TAMs [3]. Therefore, understanding and targeting the specific pathways associated with the M2 polarization state of TAMs is a promising approach for therapeutic strategies.

As previously reported by us, a differential influence and functionality of localized tumor sites in TME, i.e. tumor central area (TCA) and tumor invasive front (TIF), on related immunologic responses play a key role in cancer immunity and tumor progression [4]. TAMs localized in TCA or TIF can impact oncogenesis in an opposite manner. High TAMs frequency in TCA is associated with poor prognosis in hepatocellular carcinoma (HCC), esophageal, ovarian and breast cancer [5–10]. By contrast, TAMs in TIF in colonic, gastric, and endometrial cancer correlate with a favorable outcome [11–13]. TME, tumor-derived factors and escape mechanisms facilitate tumor growth, neovascularization, and metastasis. However, a constant interplay between immune responses in TCA or TIF and infiltrating TAMs and their polarization states, plays a key role in this process.

Tumor angiogenesis is a major factor in the development and progression of cancer and therefore inhibiting it is a promising therapeutic target [14]. Members of the angiopoietin (Ang) family are potent growth factors and important modulators of tumor angiogenesis but could represent functional antagonists as well [15]. Monocytes/macrophages are primary producers of angiogenic mediators in oncogenesis [16–17]. Bone marrow (BM)-derived myeloid cells contribute significantly to tumor angiogenesis [18]. In both mice and humans, a subset of proangiogenic circulating and tumor-infiltrating monocytes expressing functionally active Ang receptor TIE2 have been recently identified [19]. These Tie2-expressing monocytes (TEMs) are selectively recruited to tumors, foster neoangiogenesis, and oncogenesis, but are not found in non-cancerous tissues [20, 21]. We have previously demonstrated that in respect to tumor vascularization grade, monocyte localization in TCA or TIF and related cancer immunity, these tumor-infiltrating TEMs and TAMs can impact survival and prognosis in an opposite manner [4, 22, 23].

Clinical significance of angiogenic TEMs and M2-polarization state of infiltrating TAMs has been suggested for human malignancies, where the interplay between tumor immunology and angiogenesis plays a key role in oncogenesis [20]. Recently, we showed that tumor Ang density, corresponding angiogenic TEMs and infiltrating TAMs impact patent survival and exert prognostic significance in primary hepatic tumors and hilar cholangiocarcinomas [4, 22, 23]. However, the importance of these immune markers in pancreatic ductal adenocarcinoma (PDAC) is unknown. The aim of this study was therefore to evaluate the importance of M2-polarized TAMs, Angs and related Ang-receptor bearing TEMs and their association with tumor angiogenesis, tumor growth, metastasis, recurrence and clinical prognosis in human PDAC.

Table 1: Clinicopathological characteristics of the patients included in the study

Typical images for the tissue distribution of TEMs, CD68+ or CD163+ TAMs and angiopoietins are shown in Figure 1A–1H, the respective statistical evaluation of all patients is summarized in Tables 2, 3 and 4. TEMs are preferentially located in areas of tumor neovascularization, but not in tumor necrosis regions (Figure 1A–1B). CD68+ or CD163+ TAMs showed a uniform density in the tumor stroma, TCA, TIF and were also present in necrotic tumor regions (Figure 1C–1D). The pattern of TEMs and CD163+ TAMs displayed a preference for the tumor perivascular areas (Figure 1A). High Ang density (Figure 1E–1F) was not frequently observed in PDAC, as most cases showed Ang low abundance. In contrast, most of PDAC samples displayed high tumor microvascular density (MVD) (Figure 1G–1H). 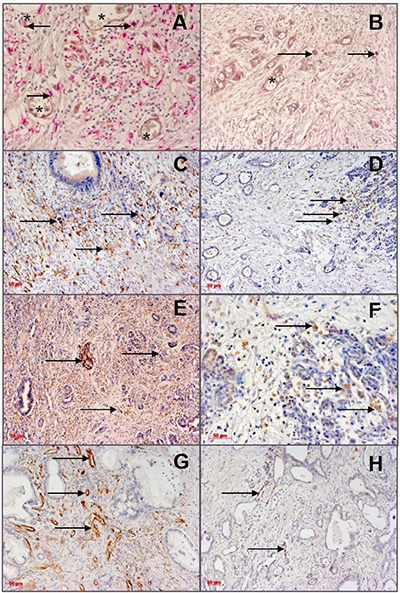 Table 3: Correlation of CD163-positive TAMs in the tumor invasive front with clinicopathological characteristics of pancreatic adenocarcinoma

TEMs associate with metastatic disease and tumor recurrence in PDAC

The presence of TEMs in the TCA was associated with an enhanced incidence of metastatic disease (Figure 1A–1B, Tables 2 and 4). In the TEM+ group 6/7 (85.7%) and in the TEM- group 41/99 (41.4%) patients had distant metastases (ρ = 0.023). Interestingly, a significant association between infiltrating TEMs and presence of hepatic metastases was observed: 76/99 (76.8%) patients of the TEM− group had no distant metastases in the liver (ρ = 0.047). The presence of TEMs did not correlate to other clinicopathologic parameters or to Ang expression in PDAC. The frequency of CD68+ TAMs in TCA or TIF was not associated with the studied parameters. 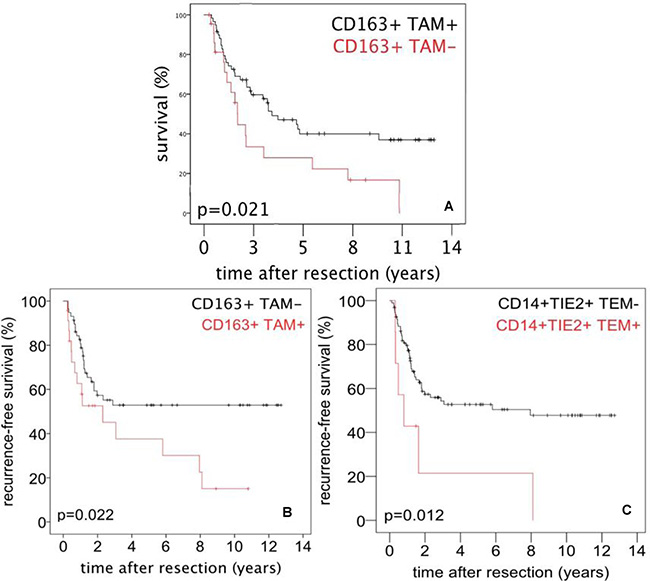 The mechanisms that enable solid cancers to escape elimination by the immune system remain unclear, but their elucidation may provide novel therapeutic interventions. Host immune function in TME, i.e. TCA and TIF, is shaped by tissue-specific and tumor-derived signals that reduce the potency of anti-tumor immune competence. This is particularly relevant in human oncogenesis where immune tumor infiltration with macrophage/monocyte subsets heavily affects prognosis [24]. M2 TAMs and TEMs express functional receptors of angiogenesis, build up to 50% of the tumor volume, exert a significant impact on cancer-related inflammation and angiogenesis, inhibit anti-tumor response, and facilitate tumor escape mechanisms, metastasis and tumor progression [25].

There is a scarce amount of data on the presence of TEMs and their correlation with clinicopathologic characteristics in human tumors. Furthermore, the significance of TEMs to date is established mainly regarding their circulating population in human blood [26, 27]. The few published studies failed to demonstrate a prognostic value of infiltrating TEMs in solid cancerous tissue. To our knowledge, the presented work is the first to document TEMs presence and importance in PDAC. Intratumoral visualization of TEMs using immunoreactivity revealed abundance in TCA and TIF, and a preferential localization in proximity to microvasculature, as well. Of note, as reported by us previously for other human cancers, a considerable amount of PDAC samples exhibited an absence of TEMs in solid cancerous tissue [23].

In our work presence of TEMs and M2 TAMs impacted patient survival after resection of PDAC. Multivariate analysis showed that tumor recurrence is an independent predictive factor for survival in patients with resectable PDAC (data not shown). Therefore, the positive correlation between infiltrating TEMs and recurrent disease supports the notion that TEMs may be a prognostic marker in patients with PDAC. In support of this, we found that patients with a higher TEMs frequency are at a greater risk of developing metastatic disease and especially liver metastases. Of note, the latter usually precludes curative surgery and in these cases patients are treated with systemic therapy for disease control. Taken together, these data implicate the potential use of TEMs and CD163+ TAMs as possible biomarkers in PDAC that could help deliver more individualized diagnostic and therapeutic modalities.

Members of the Ang family of angiogenic growth factors are potent regulators of blood- and lymphangiogenesis [28]. In agreement with previous reports, delineating a negative impact of Ang-2 in PDAC, in the current work Ang-2 frequency associated with increased incidence of perineural sheet infiltration [29]. However, we have previously shown Ang-1 to be associated beneficial tumor characteristics in other hepatobiliary malignancies [23]. In line with this, in the current work Ang-1 distribution revealed an inverse correlation with incidence of perineural sheet infiltration. Taken together our data is in concordance with published results indicating functional antagonism within the human angiopoietin axis.

The descriptive nature of the presented results represents a limitation of the current work. Thus, functional tests, such as in vitro co-culturing of TEMs and tumor-derived factors/tumor cells to measure and verify M2-related phenotype and responses will allow a greater understanding of this proposed interaction. This could help deliver novel strategies for adjunct treatments to augment the efficacy of checkpoint blockade inhibitors or more standard chemotherapies, radiation, and surgery.

A total of 106 patients who underwent major pancreatectomy for pancreatic adenocarcinoma at the Department of Visceral-, Transplantation-, Thoracic- and Vascular Surgery, University Hospital Leipzig, Leipzig, Germany were included in the study. Adenocarcinoma of the pancreas was confirmed histopathologically and classified according to the Union for International Cancer Control (UICC) classification. This study was carried out in accordance with the recommendations of the Ethics Committee of the Medical Faculty of the Leipzig University (no. 234-14-14072014).

In all patients, pancreas resection was with curative intent and none of the patients received neoadjuvant radio- and/or chemotherapy prior to surgery. None of the patients died in the postoperative period. Tissue blocks embedding a representative sample of the tumor were retrieved from the files of the Institute of Pathology. Histological diagnosis of the primary tumor stage and nodal status were determined by hematoxylin and eosin (H&E) stained sections. Histological evaluation of all specimens was performed by two investigators (CP and GA) with formal training in histopathology, and an independent pathologist (KS), without any knowledge of prognosis or clinicopathological variables. Paraffin-embedded, formalin-fixed tumor samples were used.

Protocols for immunohistology and quantification of cellular infiltrates in paraffin-embedded, formalin-fixed tissue samples have been published previously [4, 22, 23]. Table 5 summarizes the antibodies and staining conditions used. Briefly, 5 μm tumor sections were dewaxed and rehydrated. After antigen retrieval and blocking of the endogenous peroxidase or alkaline phosphatase activity, the sections were consecutively incubated with the primary and enzyme-labeled secondary antibody and the respective enzymatic substrate. Sections were counterstained with hematoxylin. Specificity controls were performed without the primary antibody.

Microvessels were identified by CD31 expression. Quantification of CD31+ microvessels was performed as described [30]. Briefly, the area of highest MVD, that is the vascular hot spot, was located by scanning the whole tumor section. All microvessels were counted in this spot. MVD was calculated from the number of vessels in ten random optical fields/section. MVD was categorized as low or high (MVDlow and MVDhigh; cut-off value: 50 microvessels/10 optical fields, Table 4).

Survival analysis, univariate analysis and Kaplan–Meier curves were generated with the SPSS software program (Version 23.0.0.0/Year 2015). Comparison of categorical and continuous variables was performed using the Chi2-test and the Wilcoxon-test, respectively. Survival data were compared with the log-rank-test. Variables with a significant influence on survival in the univariate analysis were entered into a Cox regression analysis. A difference was considered significant for p < 0.05.

Georgi Atanasov: Significant contributions to the conception of the study, to the generation, analysis, and interpretation of the data, and to preparing the manuscript.

The authors declare that they have no competing interests related to the work.