Background: Colorectal cancer (CRC) is caused by genetic aberrations. MACROD2 is commonly involved in somatic focal DNA copy number losses, in more than one-third of CRCs. In this study, we aimed to investigate the association of MACROD2 protein expression with clinical outcome in stage II and stage III colon cancer.

Conclusion: These data indicate that low nuclear expression of MACROD2 is associated with poor prognosis of patients with stage III MSS primary colon cancer who were treated with 5-FU-based adjuvant chemotherapy.

Colorectal cancer (CRC) has a worldwide incidence of over 1.3 million and is one of the leading causes of cancer-related deaths [1]. In the Western world, approximately one-third of CRC patients will die due to disease progression [2]. To estimate the prognosis of CRC patients, tumors are currently classified into stage I to IV according to the tumor-node-metastasis (TNM) staging, which is primarily based upon histopathological features of the tumor. Because somatic DNA alterations enable tumors to progress, characterization of genomic inter-tumor heterogeneity may reveal promising candidate biomarkers that could ultimately improve patient stratification for prognosis and therapy prediction. MACROD2 has been shown to be commonly affected by focal deletions in CRC genomes [3-5], and has been identified to be the most frequently affected gene by structural variant (SV) breakpoints in CRC [5, 6]. The prevalence of chromosomal breakpoints in MACROD2 is very high, i.e. 41% in a large series of 352 advanced CRC samples [6].

The function of MACROD2 is largely unknown. Recent studies demonstrated that MACROD2 is involved in highly dynamic mono-ADP-ribosylation (MARylation), which is a reversible post-translational protein modification that enables to control functions of target proteins. ADP ribose moieties can be attached to amino acid acceptor sites of target proteins by ADP-ribosyltransferases using the cofactor NAD+. Reversion of this modification is achieved by ADP-ribosylhydrolase activity. The macrodomain containing hydrolase MACROD2 can recognize mono-ADP-ribosyl groups and erase this motif from MARylated proteins. For example, the mono-ADP-ribosylhydrolase activity of MACROD2 is able to restore the WNT inhibitory function of the kinase GSK3B that is modified by PARP10-mediated MARylation [7-10]. Activation of WNT signaling is an important driver of CRC development, and loss of MACROD2 function could thus contribute to CRC progression. Moreover, endogenous intracellular MACROD2 is recruited upon DNA damage and is able to reverse PARP1-mediated MARylation in the DNA-damage response [8].

In the present study, we examined the prognostic and predictive value of loss of MACROD2 protein expression in a series of 386 stage II and stage III clinically well-annotated primary colon cancers [11], and demonstrate that loss of MACROD2 protein expression is associated with poor survival in the subset of stage III colon cancer patients who were treated with adjuvant 5-FU-based chemotherapy.

Prognostic value of MACROD2 protein expression was examined by evaluation of immunohistochemical staining on TMAs that contained tissue biopsies from 226 stage II and 160 stage III colon cancers. Intensity of nuclear MACROD2 protein expression of epithelial cells could be scored for 343 patients (Figure 1) while 25 stage II and 18 stage III cases could not be evaluated due to technical reasons such as loss of cores from TMA slides. Dichotomization of the scores resulted in 180 tumors with low (52%) and 163 tumors with high (48%) nuclear MACROD2 expression of neoplastic cells. Baseline clinicopathological characteristics of these patients in relation to MACROD2 expression are presented in Table 1. MACROD2-low colon cancers were associated with higher N-stage (p=0.03, Table 1). 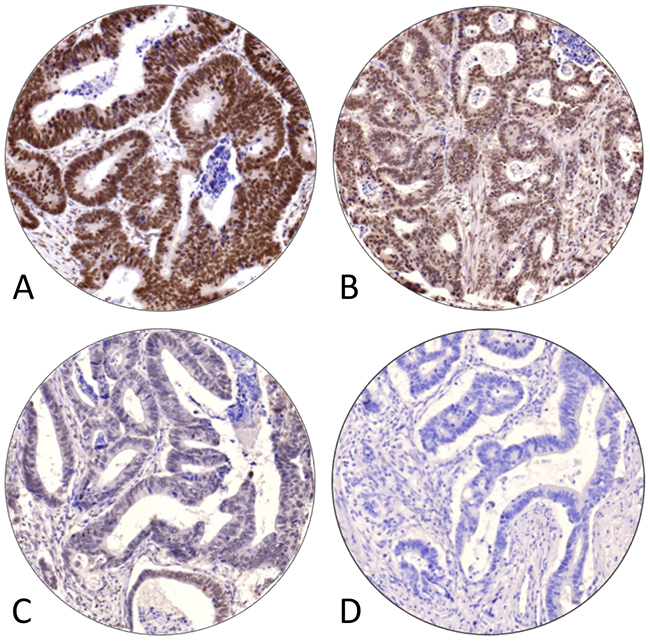 Values in parentheses are percentages unless stated otherwise. P-values were calculated by chi-square tests or t-tests for continuous data. Bold p-values are considered significant (p<0.05). 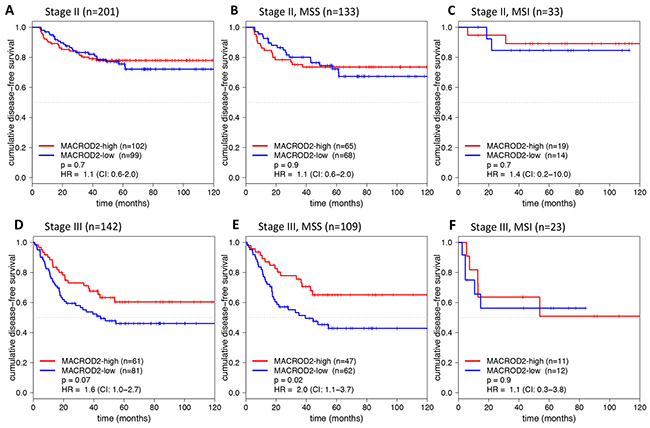 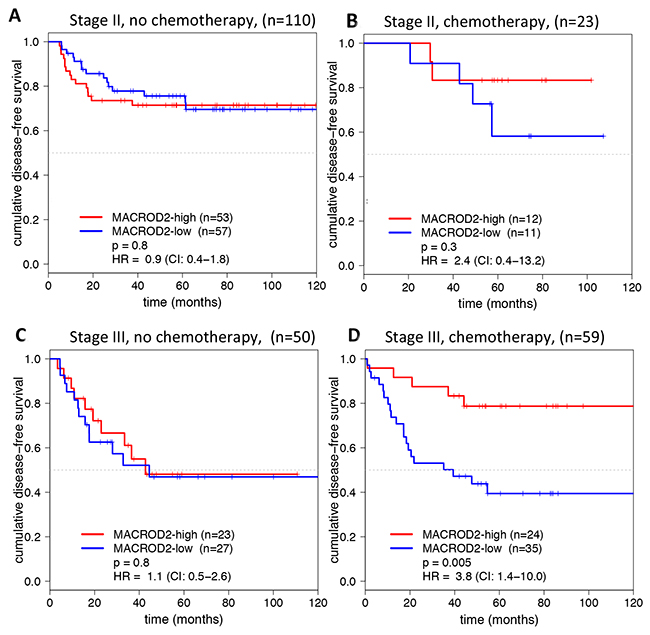 Figure 3: DFS curves (in months) for MACROD2 expression in MSS colon cancer patients who did not receive (A, C) and did receive (B, D) 5-FU-based adjuvant chemotherapy for stage II (A, B) and stage III (C, D) colon cancer patients. Log-rank p-values and Cox regression HRs (95% CI) are reported.

The current study showed that low MACROD2 protein expression was associated with poor DFS in stage III MSS colon cancer patients who received 5-FU-based adjuvant chemotherapy (Figure 3D). The observation that MACROD2 expression was predictive in colon cancers treated for 5-FU-based adjuvant therapy (Figure 3) may suggest that the underlying biological mechanism is involvement of MACROD2 in DNA damage response, which is one of the known functions of MACROD2 [8]. It has previously been demonstrated that MACROD2 is involved in DNA damage signaling and is capable to reverse PARP1-mediated MARylation [8]. Notably, presence of MACROD2 could effectuate suppression of PARP1 activity [8], which is involved in DNA repair of incorporated 5-FU and its metabolites in the genome that exacerbates replication stress [12]. Consequently, tumor cells having low protein expression of MACROD2 may effectively enable PARP1-dependent DNA repair. Thus, one could speculate that 5-FU treatment combined with a small molecule PARP inhibitor may be lethal for tumor cells that have MACROD2-low protein expression. One in vitro study showed that PARP inhibition synergizes with FdUrd, which is a metabolite of 5-FU, in MSI and MSS colon cancer cells [13].

MACROD2 has been identified to be the most frequent recurrent breakpoint gene in advanced CRC, which was observed in more than 40% of cases [6]. Accordingly, MACROD2 was a candidate biomarker to further examine its prognostic and predictive value. The present study demonstrated that low MACROD2 protein expression was associated with poor DFS, which is concordant with the hypothesis that SV breakpoints in MACROD2 cause loss of normal gene function. However, we were not able to correlate SV breakpoints in MACROD2 to loss of nuclear staining because all MACROD2 breakpoints are located downstream of the first three exons that encode the epitope of the polyclonal antibody that was used for immunohistochemical staining (data not shown).

Although this study comprised a large retrospective cohort of 343 stage II and stage III colon cancer patients with well-documented clinical information, the sample size was insufficient to extensively test interactions of MACROD2 expression with other clinicopathological parameters. Furthermore, validation of the predictive value of MACROD2 expression for response to 5-FU-based therapy is required in a large independent prospective randomized clinical trial minimizing bias that might be introduced by unknown confounding factors associated with DFS rates and MACROD2 expression in the current study. In addition, as currently adjuvant treatment regimens are used other than 5-FU-based monotherapy, also the predictive effect of MACROD2 on 5-FU in combination with other chemotherapeutic agents such as irinotecan or oxaliplatin needs to be examined. It is unclear how MACROD2 expression may be associated with clinical outcome in relation to drug responsiveness, exemplified by a primary breast cancer study that showed that MACROD2 overexpression was associated with worse survival, probably due to resistance to anti-estrogen receptor-alpha therapy (tamoxifen) [14].

In conclusion, loss of nuclear MACROD2 protein expression predicts poor response to adjuvant 5-FU-based chemotherapy in MSS stage III colon cancers. Further studies are warranted to validate this potential biomarker to stratify colon cancer patients for response to 5-FU-based chemotherapy in the clinic and to dissect the putative essential function of MACROD2 with respect to therapy resistance.

Archival formalin-fixed and paraffin-embedded (FFPE) material from 226 stage II and 160 stage III colon cancers was used to construct tissue microarrays (TMAs) as described by Belt et al. [11]. Microsatellite instability (MSI) status has previously been determined using a DNA-based test [11]. Tumor specimens and matched clinical data were obtained in compliance with the ‘Code for Proper Secondary Use of Human Tissue in The Netherlands’ (https://www.federa.org/). A detailed overview of clinicopathological characteristics is given in Table 1.

Four μm sections of TMAs were mounted on glass slides, deparaffinized by xylene and rehydrated with a decreasing alcohol series. Staining for MACROD2 was performed upon antigen retrieval by microwave heating in citric acid (10 mM, pH6.0) and endogenous peroxidase neutralization in 0.3% hydrogen peroxide in methanol for 25 minutes. The primary rabbit polyclonal antibody directed against human MACROD2 (HPA049076; Atlas Antibodies AB, Stockholm, Sweden) was incubated one hour at a 1:175 dilution at room temperature, followed by incubation with polymer labeling for 30 minutes at room temperature (BrightVision, Immunologic, Duiven, The Nederlands). Secondary antibodies were visualized by liquid diaminobenzidine (DAB) substrate chromogen system. Slides were counterstained with Mayer’s haematoxylin. Staining of FFPE normal kidney tissue was used as a positive control and incubation without primary antibody as a negative control.

Protein expression scores for MACROD2 were dichotomized for analysis of patient subgroups. First, the data was randomly split into five subsets. Next, the optimal cut-off for dichotomizing scores into a high- or low-expression group was based on 4/5th of the dataset using Receiver Operating Characteristic (ROC) curve analysis for survival data with 5-year DFS as the outcome of interest. This procedure was repeated five times, with 1/5th of the dataset varying. The final cut-off was the cut-off that was most often selected. In this way, the optimal cutoff for MACROD2 was set to ‘low expression’ for negative, weak and moderate intensity scores and ‘high expression’ for strong intensity scores. Optimal cutoff for MACROD2 was identical for all five iterations.

This work was financially supported by grants from the VUmc-Cancer Center Amsterdam (E. van den Broek) and from the Center for Translational Molecular Medicine, DeCoDe project (grant 03O-101). The funder had no role in study design, data collection, data analysis, decision to publish, or preparation of the manuscript.