A synergism between PARP1 and phosphorylated Erk mediating IEG (immediate early gene) expression has been recently reported in cerebral neurons and cardiomyocytes. Stimulation induced PARP-Erk synergism was required for IEG expression underlying synaptic plasticity and long-term memory acquisition during learning. It was similarly required for cardiomyocytes development. Here, we identified this mechanism in Erk-induced gene expression promoting proliferation. This mechanism can be targeted in malignant cells.

Numerous signal transduction mechanisms target the MAP (mitogen activated protein) kinase phosphorylation cascade in a variety of cell types [1, 2]. In the absence of NLS (nuclear localization signal), phosphorylated Erks shuttle between the cytoplasm and the nucleus, with tendency to translocate to the nucleus in response to stimulation [3]. A possible binding of phosphorylated Erks to any nuclear protein would retain their activity in the nucleus [3, 4]. On the basis of recent findings, we suggest that the most abundant nuclear protein PARP1 acts as an anchoring protein of phosphorylated Erk2 [5–7]. Docking sites of phosphorylated Erk were identified in PARP1 domains, which are not involved in the binding of PARP1 to DNA single strand breaks [7]. Moreover, phosphorylated Erk2 induced PARP1 activation and polyADP-ribosylation in cell-free systems and in cerebral neurons and cardiomyocytes [5–7]. PARP1 bound to phosphorylated Erk2 was highly polyADP-ribosylated in the presence of very low NAD concentrations due to intramolecular modifications enhancing its affinity for NAD [5, 6]. Activated PARP1 polyADP-ribosylate its prominent substrate in the chromatin, linker histone H1 [5–7]. PolyADP-ribosylated H1 repulsion from the negatively charged DNA [7, 8] caused a local chromatin relaxation, exposing transcription factors to phosphorylation by the PARP-bound phosphorylated Erk, as indicated by chromatin immunoprecipitation (ChIP assay) technique in electrically stimulated cultured cortical neurons [7]. Phosphorylated transcription factors Elk1 and CREB induced histone H4 acetylation and IEG expression implicated in synaptic plasticity [5, 6, 9, 10]. This mechanism may explain the role of H1 polyADP-ribosylation in PARP1 dependent memory acquisition [11–13], as well as the lack of long-term memory acquisition in PARP1-KO mice [7]. 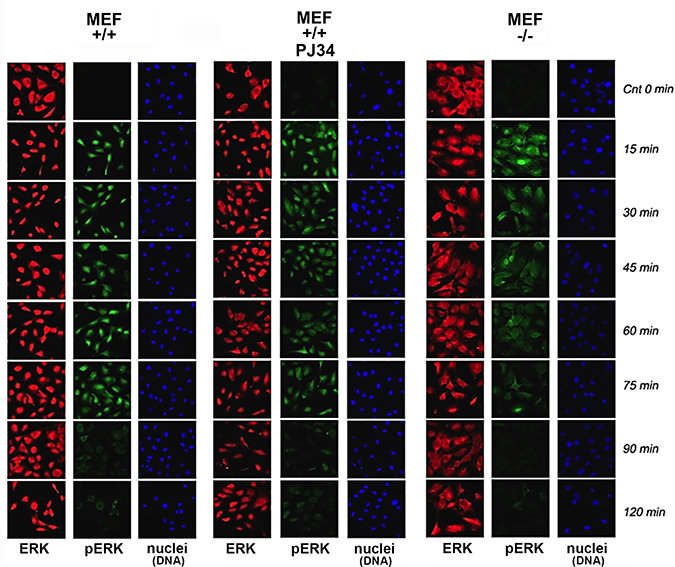 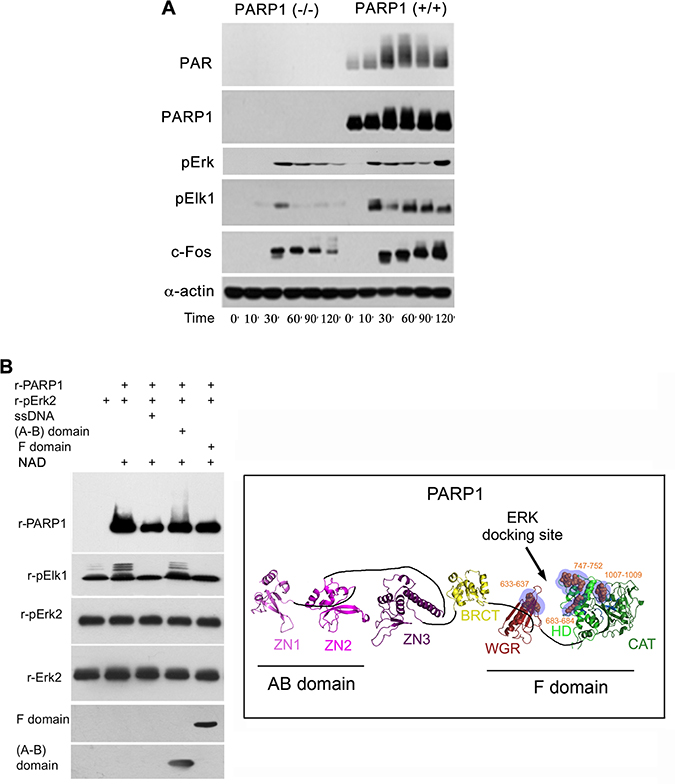 In addition, a low phosphophorylation of Erk substrates, transcription factors Elk1 and cFos was sampled in PARP1-KO MEF, in comparison to normal MEF (Figure 2). Erk phosphorylation in the cytoplasm of MEF was not affected by the genetic deletion of PARP1, indicating an exclusive effect of PARP1 on the activity of phosphorylated Erk in their nuclei (Figure 2). These results are in line with Erk-bound PARP1 activation and PARP1-dependent phosphorylated Erk activity promoting the expression of cfos (Figure 2A), which was previously observed in a cell free system (Figure 2B). 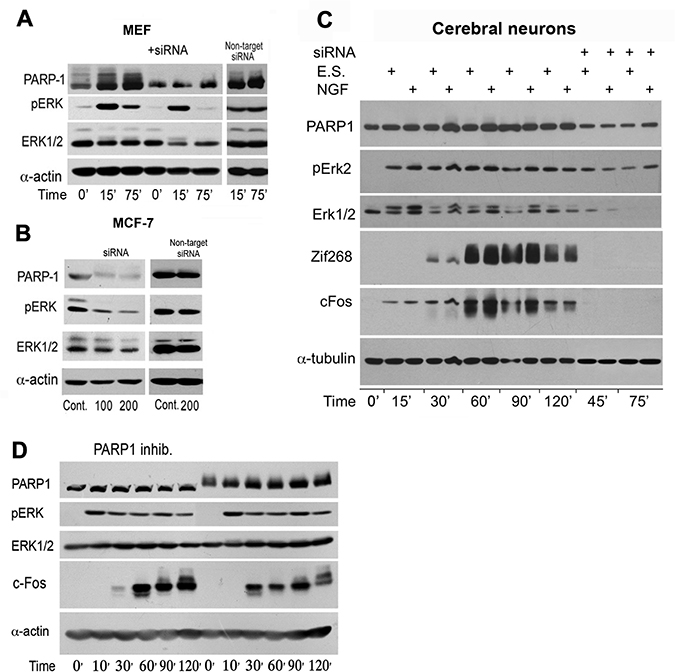 Figure 3: PARP1 mediates stimulation-induced Erk phosphorylation in the nucleus. (A) PARP1 and phosphorylated Erk1/2 were monitored by immunolabeling during 120 min in MEF after stimulation with PMA (200 nM, 15 min). PARP1-silencing suppressed stimulation induced Erk phosphorylation in the nuclei of MEF and in nuclei of unstimulated human breast cancer MCF-7 cells (B). (C) PARP1, phosphorylated Erk1/2 and transcription factors c-Fos and Zif268 were monitored by immunelabeling during 120 min in cerebral cortical neurons after electrical stimulation (ES; 100 Hz, 1 sec, 3 repeats each followed by 10 sec pause), without or in the presence of nerve growth factor (NGF; 60 ng/ml, 5 min). Erk2 phosphorylation and proteins' zif 268 and c-Fos were hardly detected after PARP1 silencing. (D) PARP1 activity mediating Erk activity in MEF. A reversible inhibition of PARP1 in MEF treated with PJ34 (10 μM, 30 min) prior to PMA stimulation (200 nM, 20 min) prevented the following elevation of cFos (30 min after stimulation). Representative results of 3 different experiments are displayed for each of these experiments.

These results support the notion that PARP1 is required for preserving the activity of phosphorylated Erk in nuclei of stimulated MEF, and PARP1 activity mediates Erk-induced cFos synthesis promoting proliferation (Figure 4). This PARP1-Erk synergism could be a new target of treatments aiming to suppress proliferation [18].

Preparation of MEF from normal and PARP1 KO mice. PARP1(−/+) 129/Sv mice were donated by Dr Dantzer (Strasbourg) and bred for PARP1 (−/−) mice in Cohen-Armon’s lab (Tel-Aviv University) under the rules and regulations of the Institutional Animal Care and Use Committee. Mouse embryonic fibroblasts were prepared from normal and PARP-KO MEF according to a procedure developed in the lab of Dr. Dantzer [20].

Nuclear protein extracts were prepared according to a procedure described before [7, 21].

Treatment with PMA. MEF were treated with PMA (phorbol esther; 200 nM; 20 min) in serum deprived medium. PMA was then 5-times diluted by adding normal medium, and crude nuclei were prepared from MEF after various incubation periods with diluted PMA (40 nM).

No conflicts of interests of the authors.