Postoperative empyema following lung cancer surgery was found in 43 patients (0.9%). The occurrence rate of postoperative empyema was significantly higher in patients with the following factors: male gender, extended surgery such as pneumonectomy, bi-lobectomy and thoracotomy, squamous cell carcinoma, and an advanced pathologic stage of II and above. Chest drainage, video-assisted thoracic surgery debridement, fenestration, and thoracoplasy were performed, where 29 patients were cured (67.5%) and 5 patients (11.6%) died from thoracic empyema-related complications. Nine patients were not cured and died due to cancer or other diseases during treatment. When comparing cured and non-cured patients, it is indicated that squamous cell carcinoma, administration of steroids, history of interstitial pneumonia, presence of bronchial stump fistula, exacerbation of interstitial pneumonia and presence of non-fermenting Gram-negative bacilli led to a significantly low prognosis. The five-year overall survival rate was 34.9%.

Empyema is the main cause of death and causes serious complications within 30 days following lung cancer surgery [1]. Moreover, postoperative empyema prolongs hospitalization and postpones subsequent treatment. It has been reported that the occurrence rate for development of postoperative empyema before 2000 was between 3.7 and 13.6% [2–8]. In recent years, due to progress in perioperative management as well as the use of perioperative prophylactic antibiotics, the occurrence rate of empyema is approximately 1% [9–11]. On the other

Of 4772 patients, 3035 patients were male, and 1737 patients were female. There were 3471 patients under the age of 75 years and 1301 patients over the age of 75 years. The number of patients who underwent lobectomy was the largest, being 3326, followed by segmentectomy, wedge resection, bi-lobectomy, and pneumonectomy, where the numbers were 651, 585, 111, and 91, respectively. Thoracotomy and video-assisted thoracic surgery (VATS) were performed on 3405 and 1367 patients, respectively. Sleeve resection and induction therapy were performed on 118 and 114 patients, respectively. Three thousand two hundred ninety patients were in Stage I and 652 patients in Stage II, while there were 827 patients in Stages III and IV. Histological analysis indicated that 3322 patients had adenocarcinoma and 1046 patients had squamous cell carcinoma (Table 1).

Among the 43 patients with postoperative empyema, the causes of empyema were bronchial stump fistula in 14 patients, retrograde infection due to a chest tube in 12 patients, bronchopleural fistula in 11 patients, exacerbation of interstitial pneumonia in 4 patients, intraoperative contamination in 3 patients, surgical site infection in 3 patients, and pneumonia in 3 patients. The date when postoperative empyema was first observed was between the 4th and 425th day (average being 43.9th day) while 29 patients developed postoperative empyema early within 30 days and 14 patients developed late after 30 days. Pleural effusion samples were collected from 43 patients to examine the presence of bacteria by culturing. Of 43 samples, 37 samples contained a total of 46 types of bacteria, where MRSA was found in 10 samples, MSSA was in 9 samples, Pseudomonas was in 6 samples, Enterococcus was in 4 samples, and other types of bacteria were found in 16 samples (Table 2). 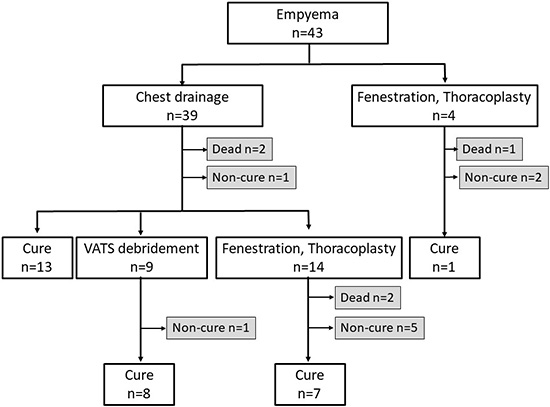 When comparing cured and non-cured patients, it is indicated that gender, age, type of surgery, and pathologic stage did not impact prognosis of the disease; however, squamous cell carcinoma, administration of steroid, history of interstitial pneumonia, presence of bronchial stump fistula, exacerbation of interstitial pneumonia and presence of non-fermenting Gram-negative bacilli led to a significantly low prognosis (Table 2). 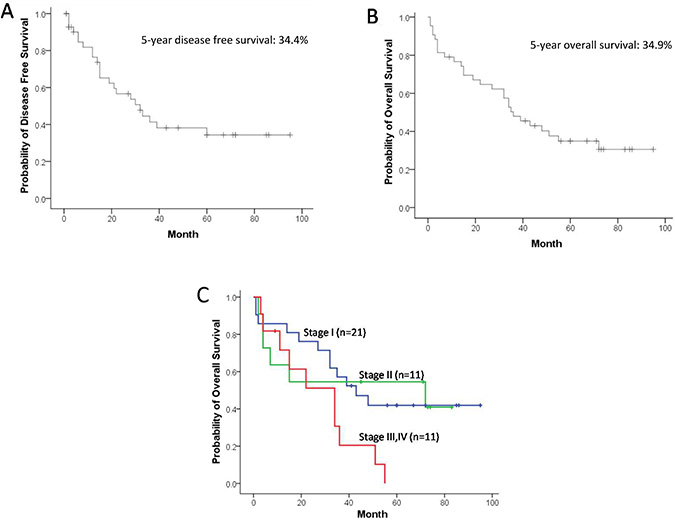 In this study, the occurrence rate of postoperative empyema was significantly higher in patients with factors including male gender, extended surgical procedures such as pneumonectomy and bi-lobectomy, thoracotomy, squamous cell carcinoma, and an advanced pathologic stage of II and above. Patients at an advanced pathologic stage with squamous cell carcinoma require pneumonectomy; thus, it is thought that these conditions may result in the development of postoperative empyema following lung cancer surgery. In recent years, it is considered that the increased use of minimally invasive surgery such as VATS, instead of thoracotomy, may help to reduce the number of postoperative empyema occurrences [12, 13].

Reports on factors inducing postoperative empyema and treatments and prognosis for postoperative empyema have been scarcely available; thus, this study is the first to report on these questions. According to this study, it was discovered that empyema in 58.2% of patients was due to fistulas such as bronchial stump fistula and bronchopleural fistula. Among these fistulas, the prognosis for bronchial stump fistula is significantly poor and the fistula is difficult to cure. The next highest factor, 27.9% of empyema patients, which induces empyema is retrograde infection due to a chest tube; however, all of them were cured. On the other hand, none of the empyema patients with interstitial pneumonia were cured. Thirty-nine (90.7%) of the empyema patients underwent chest drainage as an initial treatment of empyema while 4 patients (9.3%) underwent fenestration from the beginning. While thirteen empyema patients (30.2%) were cured by chest drainage alone, another 23 chest drainage patients required additional treatment by VATS debridement or fenestration.

The risk factors which impact prognosis of empyema, including a cancer type being squamous cell carcinoma, administration of steroids, history of interstitial pneumonia, presence of bronchial stump fistula, exacerbation of interstitial pneumonia, and presence of non-fermenting Gram-negative bacilli possibly turning to drug resistance, were identified by univariate analysis. No independent risk factors were identified by multivariate analysis. However, the reasons may be due to the small patient number and each factor playing a confounding factor.

Postoperative empyema following lung cancer surgery is a serious complication. However, no reports on treatments of empyema and prognosis of patients with empyema have been published. This study is retrospective. However, the data were collected from 4772 patients who underwent lung cancer surgery and the actual cause, treatment, and prognosis of empyema were reported.

There were some limitations of this study. Detailed analysis was possible for only 43 patients with postoperative empyema, however, detailed information regarding past history, complications, operative time, blood loss during surgery, coverage of the bronchial stump and prognosis of other patients who underwent lung cancer surgery was difficult to obtain. Because of the multi-institutional study, the surgical procedures, and the perioperative management were different among institutions. Although the occurrence rate, inducing factors and prognosis for postoperative empyema were indicated, to assess and plan for patients with the risk preoperatively cannot be devised from this study. Based on this study, future prospective studies of postoperative empyema are anticipated.

This study was approved by the Institutional Ethics Review Board (Teikyo University Review Board 12–152) and other institutions, and the need for informed consent from patients was waived provided that patient data remained anonymous.

Purulent effusion collection in the postoperative thoracic cavity with over Grade IIIa of Clavien-Dindo classification is defined as empyema. The bacterial culture results of purulent effusion were not accounted for. Cancers were pathologically classified according to the eighth edition of the TNM classification for lung cancer according to the international association for the study of lung cancer [23]. Video-assisted thoracic surgery was defined as surgery with a thoracoscopic field of view, and a chest metallic retractor was not used, in this study.

The following data were collected from patients with postoperative empyema after lung cancer surgery: gender, age, pre-operative complications, treatment for the lung cancer, date of surgery, type of surgery, type of histology, pathologic stage (I, or II/III/IV), date of empyema confirmed, cause of empyema, bacterial test of pleural effusion, treatment for the empyema, date of lung cancer recurrence, and disease status during follow-up. Patients were selected by each institution from those whose causes of empyema were intraoperative contamination, infection from surgical site, retrograde infection due to a chest tube, bronchial stump fistula, bronchopleural fistula, pneumonia, interstitial pneumonia, unknown, and others. Intraoperative contamination is the contamination by exposure of pulmonary contents and sputum during operation, and retrograde infection due to a chest tube is the contamination of chest drain penetration site or back flow of contents of drainage bag. The doctor in charge raised the causes which seemed appropriate. Data regarding gender, age, type of surgery, type of histology, and pathologic stage were collected from the 4772 patients included in the study.