S. typhimurium A1-R, expressing green fluorescent protein (GFP), was administered to nude mice with popliteal lymph node metastasis of human HT-1080 fibrosarcoma as well as lung metastasis of the fibrosarcoma. S. typhimurium A1-R was delivered via a lymphatic channel to target the lymph node metastases and systemically via the tail vein to target the lung metastasis. The sarcoma cells expressed RFP in the cytoplasm and GFP in the nucleus linked to histone H2B, enabling color-coded real-time imaging of the GFP-expressing bacteria targeting the metastases. After 7–21 days of treatment, the metastases were eradicated without the need of chemotherapy or any other treatment. No adverse effects were observed [12].

Intratumoral injection of Clostridium novyi spores with the toxin gene knocked out (C. novyi-NT) was administered to dogs with solid tumors. Responses were observed in 6 of 16 dogs. A human patient with advanced leiomyosarcoma was treated with an intratumoral (i.t.) injection of C. novyi-NT spores which reduced the tumor’s size [17]. However, obligate anaerobes such as C. novyi or Bifidobactum [18] may not be appropriate for metastatic cancer since they are seemingly only active with i.t. administration. If bacterial therapy is going to be widely available and efficacious, it has to target metastatic cancer.

In the present study, we determined the efficacy of S. typhimurium A1-R on primary tumors and experimental and spontaneous metastasis in mouse models of human soft-tissue sarcoma. 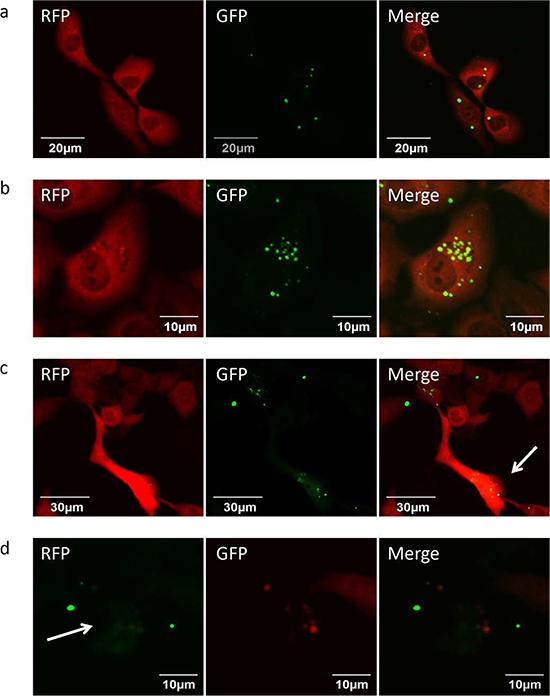 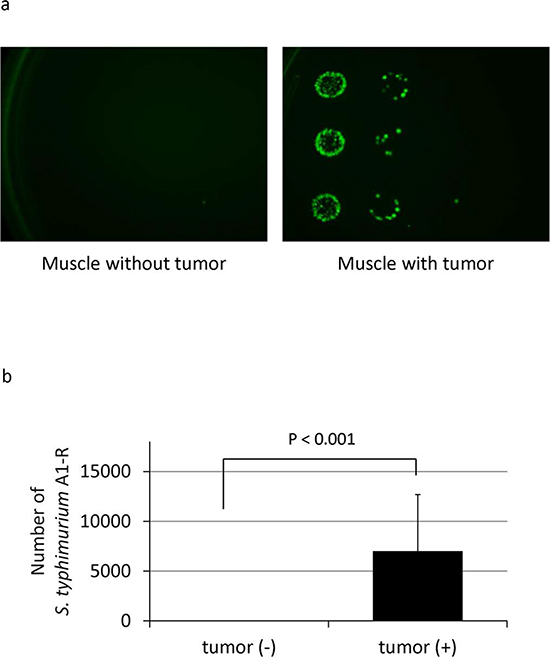 Thus, S. typhimurium A1-R directly inhibits primary tumor growth and metastasis of soft-tissue sarcoma. The present study suggests that S. typhimurium A1-R therapy has superior potential for the systemic treatment of soft tissue sarcoma metastasis than C. novyi (NT) that appears to be limited to i.t, injection [17]. The comparison of the anti-tumor and anti-metastatic efficacy of the two types of bacteria will require future clinical trials. 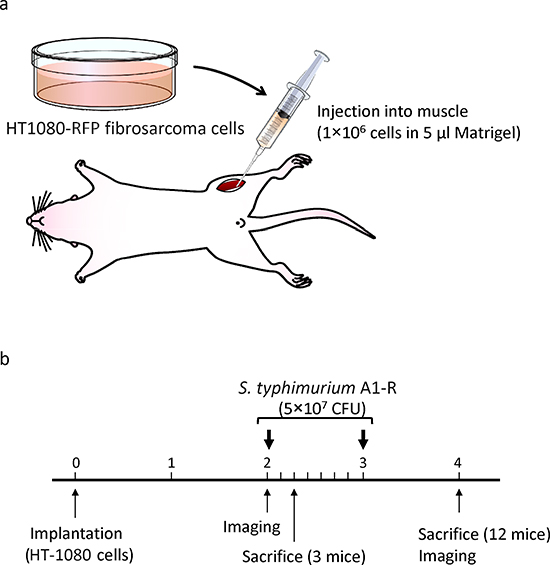 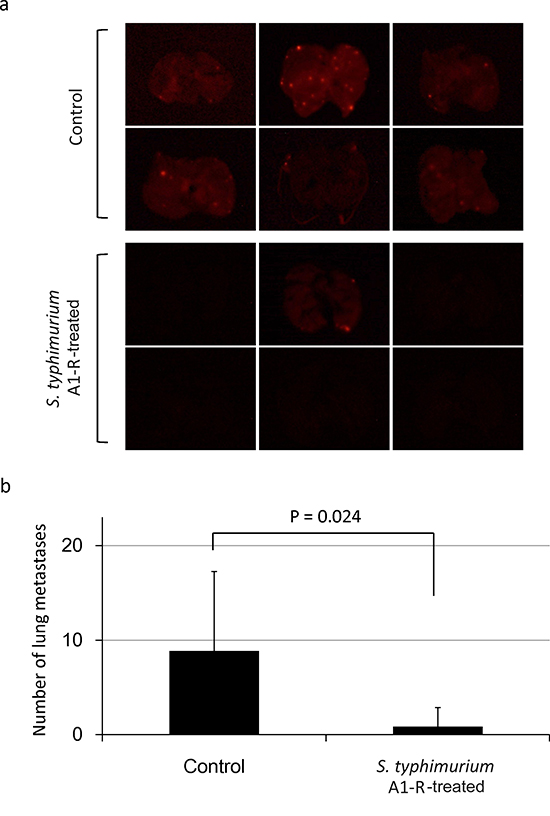 To evaluate the ability of S. typhimurium A1-R to kill human fibrosarcoma cells in vitro, the interaction between S. typhimurium A1-R expressing GFP and HT1080-RFP cells was observed with the Fluoview FV1000 confocal microscope (Olympus Corp., Tokyo, Japan). HT1080-RFP cells were cultured in 35 mm dishes for 24 h. S. typhimurium A1-R bacteria were grown in LB and added to the fibrosarcoma cells (1 × 108 CFU/dish or 1 × 109 CFU/dish). After 1 h incubation at 37°C, the cells were rinsed and cultured in medium containing gentamycin sulfate (100 μg/ml) to kill external but not internal bacteria [3].

Athymic (nu/nu) nude mice (AntiCancer, Inc. San Diego, CA) were used in this study. Mice were kept in a barrier facility under high efficiency particulate air (HEPA) filtration. Mice were fed with autoclaved laboratory rodent diet. All animal studies were conducted in accordance with the principles and procedures outlined in the National Institutes of Health Guide for the Care and Use of Laboratory Animals under Assurance no. A3873-1.

Six-week old female nude mice were anesthetized by a ketamine mixture (10 μl ketamine, HCL, 7.6 μl xylazine, 2.4 μl acepromazine maleate and 10 μl H2O) via s.c. injection. The leg was sterilized with alcohol and an approximately 2 mm midline skin incision was made just above the knee joint to expose the quadriceps femoris muscle. HT1080-RFP cells (1 × 106 per mouse) in Matrigel (5 μl per mouse) (BD Bioscience, San Jose, CA) were injected into the muscle with a 0.5 ml 28 G latex-free insulin syringe (TYCO Health Group LP, Mansfield, MA). The skin was closed with a 6-0 suture. On day 14 and 21, S. typhymurium (5 × 107 CFU per mouse) was injected into the tail vein. On day-28, the mice were sacrificed and fluorescence imaging was performed to determine the efficacy of bacterial therapy for both primary tumors and lung metastases. The size of the primary tumors (fluorescent area [mm2]) was measured with the iBox Imaging System (UVP LLC, Upland, CA, USA). The lung tumor was excised and the metastases on the surface were imaged and counted with the OV100 Small Animal Imaging System (Olympus Corp., Tokyo, Japan).

Six-week-old female nude mice were used. To obtain experimental lung metastasis, HT1080-RFP cells (1 × 106 cells in 100 μl PBS) were injected into the tail vein of 24 nude mice (day 0). On days 7, 14, and 21, S. typhimurium A1-R (5 × 107 CFU) was injected in the tail vein. Twelve mice were treated with bacteria and 12 mice were used as untreated control. On day 28, 6 mice (3 mice each group) were sacrificed and the lungs were imaged to observe lung metastases and to determine the efficacy of bacterial therapy. Lung metastases were observed and the fluorescent areas were recorded using the OV100. Additionally, 18 mice comprising 9 control mice and 9 S. typhimurium A1-R-treated mice were observed for survival analysis.

Data showing comparisons between two groups were assessed using the Student’s t-test. Kaplan–Meier analysis with the log-rank test was used to determine survival difference between treatment groups. Differences were considered significant when p ≤ 0.05. The experimental data are expressed as the mean ± SE.

This work was supported by the National Cancer Institute grant CA132971.