Modified carbapenem inactivation method (mCIM) testing was currently recommended by Clinical and Laboratory Standards Institute (CLSI) for detection of carbapenemase among Enterobacteriaceae clinical isolates. In this study, a panel of 145 clinical strains were collected for evaluating the mCIM for detection of carbapenemase. Antimicrobial susceptibility testing were performed by microbroth dilution and the results were interpreted according to CLSI guidelines. All strains were resistant to ertapenem with high MIC50 and MIC90 (64 mg/L –>128 mg/L). For blaNDM-1-positive or blaOXA-232-positive strains, the zone of inhibition of meropenem were all 6 mm despite the incubation time of 6 h, 18 h or 24 h. For 6 h, the zone of meropenem inhibition for most of carbapenemase-positive isolates were meet the positive criteria 6–15 mm. However, for carbapenemase-negative isolates, the zone of meropenem inhibition were 16–18 mm after 6 h incubation which should be considered indeterminate for standard incubating time such as 18 h or 24 h. After incubating for 18 h or 24 h, the zone of meropenem inhibition were 22–25 mm for carbapenemase-negative isolates and meet the negative criteria. Our study indicate mCIM is a simple and effective method to identify the carbapenemases producers among Enterobacteriaceae clinical isolates.

Antimicrobial susceptibility testing were performed by microbroth dilution and minimum inhibitory concentrations (MICs) were interpreted according to CLSI guidelines [5].

mCIM for detection of carbapenemases among 145 Enterobacteriaceae clinical isolates were performed as described by CLSI [5]. The zone of inhibition of meropenem was recorded after incubating time for 6 h, 18 h, and 24 h, respectively. 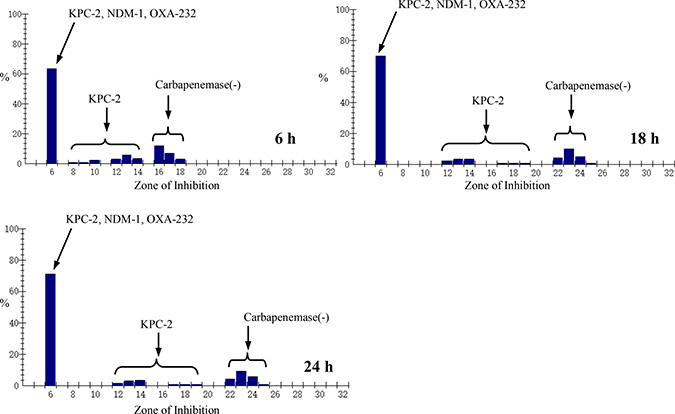 In the past 10 years, the world-wide increase in carbapenem-resistant organisms has made it even more important to use these “last line” antibiotics which are the most broad-spectrum agents known and are often life-saving therapies for severe infections [6, 7]. According to CHINET surveillance, the resistance rate of K. pneumoniae isolates to carbapenem was increasing rapidly from 2005 to 2015 [1, 8]. Rapid and effective detection of carbapenemases is important for clinicians treating patients with these infections and for infection preventionists to limit the spread of carbapenem-resistant organisms [9]. mCIM recommended by CLSI in 2017 is a simple and inexpensive method to perform and is well established in many clinical microbiology laboratories based on its high sensitivity and specificity to detect carbapenemase-producing Enterobacteriaceae isolates compared with the current published or available phenotype method such as modified hodge testing and Craba-NP method [5]. Modified hodge testing is very simple to perform and no special reagents or media necessary. however, false-positive results can occur in isolates that produce ESBL or AmpC enzymes coupled with porin loss, and false-negative results are occasionally noted for some strains producing NDM carbapenemase. Carba_NP is a rapid method for detection of suspected carbapenemases among Enterobacteriaceae, but special reagents are needed, some of which necessitate inhouse preparation (and have a short shelf life). Given the rapid international spread of carbapenemase-producing isolates and the urgent need of treatment for the infection due to these isolates, a simple and effective mCIM for detection of KPC-2, NDM-1 and OXA-232-type carbapenemases which were the most common carbapenemases among Enterobacteriacece isolates in China [10, 11] is important.

This work was supported by the National Natural Science Foundation of China (grant no. 81273559 to Fupin Hu). The funders had no role in study design, data collection and analysis, decision to publish or preparation of the manuscript.