Acute lymphoblastic leukemia (ALL) is the most common pediatric malignancy and is characterized by long-term survival rates (80-85%), especially in developed countries [1]. In the remaining 15-20% of pediatric ALL patients, relapse is the major cause of death [2-5]. High-resolution genome-wide profiling and sequencing studies demonstrate that the risk of ALL relapse is associated with specific biological features of the leukemic cells including gene mutations, copy number variations and gene fusions. Large-scale genetic profiling of Philadelphia chromosome (Ph)-like ALL or BCR-ABL1-like ALL (Ph-positive ALL without BCR-ABL1 fusion protein) shows large number of genetic alterations in the cytokine receptor and kinase-signaling pathway genes that contribute to its aggressive phenotype and frequent disease recurrence [6, 7].

Nearly 47% of BCR-ABL1-like ALL cases show rearrangements in the Cytokine Receptor-Like Factor 2 (CRLF2) gene [6]. CRLF2 gene encodes the thymic stromal lymphopoetin receptor (TSLPR) and is located in the pseudoautosomal region 1 (PAR1) on the Xp22.3 and Yp11.3 chromosome [8]. During lymphopoiesis and inflammation, thymic stromal lymphopoietin (TSLP) binds to the heterodimer of TSLPR and the IL7RA α chain [8, 9]. CRLF2 rearrangements include interstitial focal deletions juxtaposing CRLF2 with the promoter region of the G-protein purinergic receptor (P2RY8) [8, 9], or translocation of CRLF2 to the immunoglobulin heavy chain locus (IGH α) on 14q32.3 [6]. In both cases, CRLF2 expression is enhanced, which increases activation of the downstream JAK-STAT signaling pathway that promotes proliferation of leukemic cells [10, 11]. In some cases, activating mutations in the CRLF2 or IL7RA genes promote CRLF2 overexpression [8, 9].

The prognostic relevance of genomic aberrations in the CRLF2 gene or CRLF2 mRNA overexpression in pediatric BCP-ALL is unclear because of variations in methodologies, inclusion criteria and treatment protocols used by different studies [12-16]. Bugarin et al. demonstrated that high surface CRLF2 expression correlates with increased CRFL2 transcript levels in the leukemia cells isolated from CRLF2-overexpressing BCP-ALL patients [17]. However, the prognostic relevance of CRLF2 protein expression in pediatric BCP-ALL patients has not been reported. Moreover, the minimal residual disease (MRD) level in BCP-ALL patients with high CRLF2 transcript levels is controversial. Therefore, in this study, we prospectively analyzed bone marrow samples from 386 pediatric BCP-ALL patients at diagnosis and at days 15 and 33 of the treatment according to ALL-IC BFM 2009 protocol to determine the association of CRLF2 protein expression on the surface of leukemic cells with blast clearance in the bone marrow and treatment outcomes.

Figure 1 describes the selection strategy employed in this study. Flow cytometry analysis at diagnosis showed that 29 out of 386 BCP-ALL patients (7.51%) expressed CRLF2 (TSLPR) protein on the surface of the leukemic cells. Table 1 summarizes the clinical and biological features of all CRLF2-positive (CRLF2pos; 29/386) and CRLF2-negative (CRLF2neg; 357/386) BCP-ALL patients at diagnosis and the level of minimal residual disease at days 15 and 33 of the treatment. In comparison to CRLF2neg patients, higher number of CRLF2pos patients were associated with Down syndrome (4/29 vs. 3/357, p=0.002) and IKZF1 deletions (10/29 vs. 55/357, p=0.02). However, both CRLF2pos and CRLF2neg BCP-ALL patient groups showed similar distribution of age, sex, initial WBC count, and risk group characteristics (Table 1). 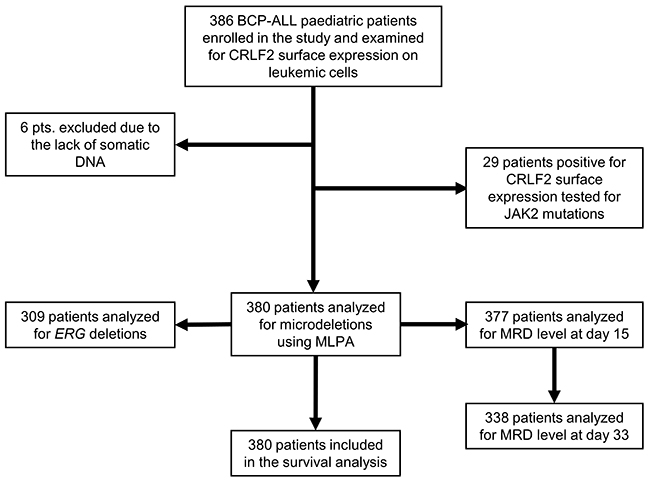 Figure 1: Flowchart shows selection strategy and classification of pediatric BCP-ALL patients at diagnosis and at days 15 and 33 of the treatment.

a Shown as number of cases, with percentages in brackets.

b Shown as median value with interquartile range shown in square brackets. 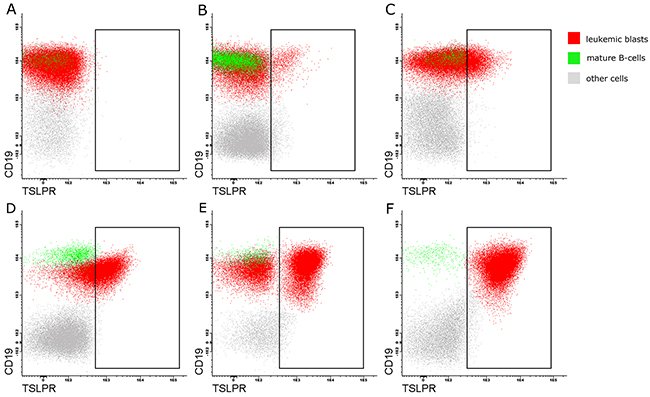 We screened 380 out of 386 BCP-ALL patients (98%) for the most common microdeletions using the MLPA method. Supplementary Table 2 shows the distribution of copy number abnormalities in CRLF2pos and CRLF2neg patients. Among the 29 CRLF2pos patients, 10 showed IKZF1 deletions; 5 of the 10 with IKZF1 deletions also showed P2RY8-CRLF2 fusions. PAX5 and CDKN2A/B microdeletions were observed in 8 and 9 CRLF2pos patients, respectively (Supplementary Table 1). BTG1 deletions were more prevalent in CRLF2pos (3/29) than the CRLF2neg cases (23/353). However, the statistical data was insignificant. Since concurrent ERG and IKZF1 deletions are prognostically significant in ALL patients [18], we analyzed 309 ALL samples (309/386; 80%) for the presence of ERG deletions. We observed ERG deletions in 14 cases (14/309; 4.4%), of which only one patient showed high CRLF2 expression (Supplementary Table 2). 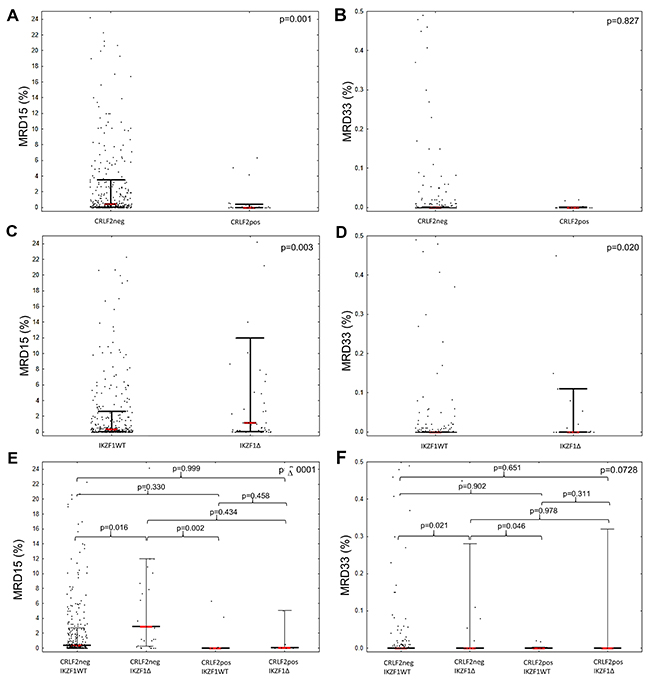 The median follow-up time for the study subjects was 4.09 (3.56-4.78) years. Univariate analysis showed that there was no correlation between CRLF2 expression status and overall survival (OS) or relapse-free survival (RFS). OS and RFS rates in CRLF2pos and CRLF2neg BCP-ALL patients were similar (OS: 88% vs. 90%; p=0.73; RFS: 71% vs. 85%; p=0.48). Overall, we noted six adverse events in CRLF2pos patients. These included five bone marrow relapses and one death due to complications in a patient with Down syndrome. Among these, three patients belonged to the intermediate risk group and the remaining three belonged to the high-risk group. Moreover, two patients that died due to relapse showed JAK2 mutations, whereas, five out of six relapse patients showed IKZF1 deletions. Two patients with relapse showed high MRD15 level that exceeded 10%. Furthermore, patients with IKZF1 deletions showed lower OS and RFS rates than those without IKZF1 deletions (OS: 72% vs. 94%, p=0.01; RFS: 62% vs. 87%, p=0.008). Therefore, we re-analyzed survival rates for patients with different combinations of CRLF2 and IKZF1 genetic alterations and observed that the 5-year OS rates were similar for all subgroups (Figure 4). However, IKZF1Δ/CRLF2pos patients showed lower RFS rates than IKZ1WT/CRLF2neg patients (Figure 4). We also analyzed if P2RY8-CRLF2 fusion correlated with patient survival. Our results showed no significant differences in OS and RFS between the P2RY8-CRLF2pos and P2RY8-CRLF2neg groups (RFS: 84% vs. 88%, p=0.42; OS: 92% vs. 90%, p=0.90; Figure 4). 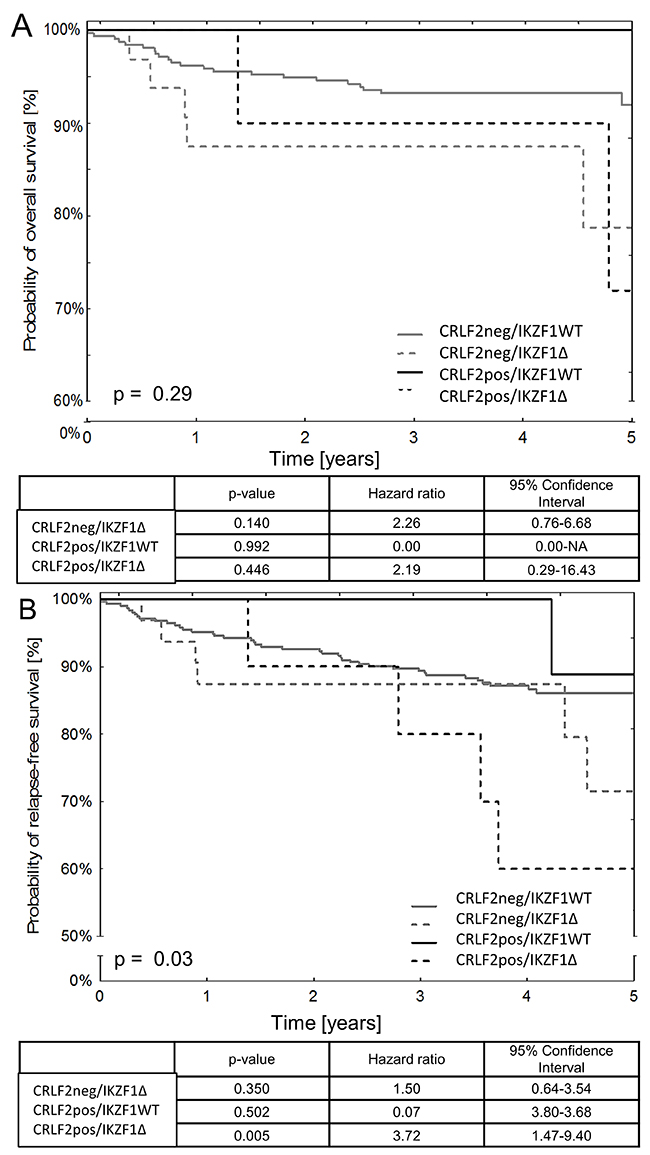 High CRLF2 mRNA expression and IKZF1 deletions were associated with low survival rates in pediatric BCP-ALL [6]. However, prognostic relevance of CRLF2 aberrations in pediatric ALL patients is controversial. CRLF2 overexpression activates the JAK/STAT pathway and therefore represents a potential target for JAK inhibitors in cancer therapy [10, 11]. However, in contrast to IKZF1 deletions, the prognostic value of CRLF2 aberrations and/or CRLF2 mRNA high expression is not clear. Moreover, prognostic significance of CRLF2 protein expression on leukemic cells has not been studied previously. Therefore, we investigated the clinical significance of surface CRLF2 protein expression in pediatric ALL patients at diagnosis as well as early response to the induction therapy at days 15 and 33. We also assessed the survival outcomes in ALL patients treated according to the BFM 2009 protocol, based on surface CRLF2 expression status with or without IKZF1 deletions.

We detected surface expression of CRLF2 in 8% of BCP-ALL patients analyzed. These findings corroborate previous BCP-ALL studies (AIEOP-BFM 2000, St Jude and COG, DCOG ALL-10) that reported high CRLF2 mRNA expression in 5-7% ALL patients [12-15]. However, this number of ALL cases with high CRLF2 mRNA expression based on the presumed cut-off values for positivity in different methodological approaches; nearly 17% of ALL cases showed high CRLF2 mRNA expression in studies that used highly sensitive qualitative and quantitative PCR based methods [19]. Bugarin et al. reported that ~10% of pediatric BCP-ALL patients exhibited surface CRLF2 expression at diagnosis by performing flow cytometry analysis using a cutoff value of 1% positivity [17]. However, cutoff values below 2% in flow cytometry analysis can result in false positives because of non-specific staining, especially in the bone marrow samples analyzed ≥24 h after isolation [20].

We observed different patterns of surface CRLF2 expression in CRLF2pos BCP-ALL patients. Among the 386 BCP-ALL patients, 12 (3.1%) showed dim or strong homogeneous expression of CRLF2 (nMFI-scores ranging from 2 to 10), whereas, 10 (2.6%) exhibited bimodal dim or strong CRLF2 expression, thereby suggesting the presence of CRLF2-positive subclones. Bugarin et al. also reported CRLF2-positive subclones in 2/421 (0.5%) patients [17]. In our study, the size of subclones ranged from 5.3 to 14.4% of blast cells in 10/11 (91%) patients with bimodal CRLF2 expression. This was consistent with previous findings, which showed that leukemic clones with CRLF2 aberrations were not predominant at diagnosis and relapse [19].

In previous reports, late relapse results in poor outcomes among the pediatric BCP-ALL patients, especially those stratified in the intermediate risk group associated with high CRLF2 mRNA expression and CRLF2 rearrangements (for example, P2RY8-CRLF2 fusion) [15, 16]. This suggests potential clinical value in evaluating surface CRLF2 expression by flow cytometry to predict treatment failure in pediatric BCP-ALL patients. In our study cohort, P2RY8-CRLF2 fusion did not significantly influence survival. However, CRLF2pos patients with IKZF1 deletion were associated with increased risk of relapse.

In conclusion, our study demonstrates that surface CRLF2 expression in pediatric BCP-ALL patients harboring IKZF1 deletions are associated with increased risk of relapse.

Bone marrow samples from all BCP-ALL patients were analyzed by 8-color flow cytometry protocol subscribed by the EuroFlow Consortium [23] at the one center (Department of Pediatric Hematology and Oncology, Medical University of Silesia) in Zabrze. In addition to the EuroFlow panel for BCP-ALL [24], we added an additional tube containing a combination of TSLPR-PE (clone 1D3, Biolegend, San Diego, CA, USA), CD19-PE-Cy7 (Beckman Coulter, Brea, CA, USA), CD34-PerCP-Cy5.5 (Becton Dickinson, San Diego, CA, USA) and CD45-Pacific Orange (Life Technologies, Carlsbad, USA) antibodies. The bone marrow samples collected at diagnosis of ALL as well as at days 15 and 33 of the therapy, were incubated with 1x FACS Lyse (Becton Dickinson) for erythrocyte lysis and the cells were stained and analyzed with the FACS Canto II flow cytometer (Becton Dickinson) within 1-48 h of sample collection. At least 50,000 stained cells were acquired by FACS. The reproducibility of the results was ensured by complying with the standard operating protocols developed by EuroFlow [24] and daily quality assessment of the flow cytometer with fluorescent beads (Sphero Rainbow Calibration Particles; Spherotech, Lake Forest, IL, USA) [23]. The data was analyzed using the FACS Diva 6.1 software (Becton Dickinson).

Moreover, 377 patients on day 15 and 338 patients on day 33 were subjected to flow cytometry analysis to determine the minimal residual disease (MRD) levels after induction treatment. Bone marrow samples were subjected to bulk lysis in accordance with guidelines of the EuroFlow consortium and stained with the following cocktail of monoclonal antibodies: CD22-PE, CD34-PerCP-Cy5.5, CD10-APC, CD38-APC-H7 (Becton Dickinson, San Diego, CA, USA), CD19-PE-Cy7 (Beckman Coulter, Brea, CA, USA), CD20 (Biolegend, San Diego, CA, USA) and CD45-Pacific Orange (Life Technologies, Carlsbad, USA) antibodies. In addition, cells were stained with the nucleus staining dye, Syto-16 (Life Technologies, Carlsbad, USA) to exclude dead cells and cell debris [24, 25]. The CRLF2 (TSLPR) expression on blast cells was determined by assessing [1] the percentage of blasts positive for CRLF2 with the cutoff set at 5%-positivity beyond the negative control level of mature B-cells, and [2] the normalized median fluorescence intensity (nMFI). The maximal MFI value for CRLF2-stained leukemic blasts was normalized by subtracting the median MFI of the negative reference population (mature B-cells) and dividing the positively stained population into 10 equal nMFI-scores, according to a protocol reported by Sedek et al. [26]. CRLF2 expression scores of 1–5 were considered negative-to-dim for low heterogeneous expression or dim for homogeneous expression. CRLF2 expression was considered as strongly homogenous for nMFI scores ≥ 6. In cases with bimodal CRLF2 expression with at least 5% positive blasts, the subclone was ascribed an nMFI score that corresponded to either dim or strong bimodal groups. Representative CRLF2 expression profiles are presented in Figure 2. CRLF2 antigen was not assessed during follow-up studies.