Outcomes of neoadjuvant and adjuvant chemotherapy in stage 2 and 3 non-small cell lung cancer: an analysis of the National Cancer Database

Lung cancer is the leading cause of cancer mortality in the United States with more than 150,000 deaths and 200,000 new diagnoses reported each year [1]. Non-Small Cell Lung Cancer (NSCLC) is a variant accounting for 85% of cases. According to the National Comprehensive Cancer Network’s (NCCN), the current recommendation for initial treatment of stage II and IIIA NSCLC is adjuvant chemotherapy after complete surgical resection [2]. While studies have been unable to show an advantage of adjuvant over neoadjuvant chemotherapy, adjuvant administration remains the standard due to a larger body of evidence supporting its benefit, when compared to surgery alone [3].

Given the evidence in support of both adjuvant and neoadjuvant administration, a few studies have sought to directly compare these two modalities. A phase III trial by Felip et al. compared neoadjuvant and adjuvant chemotherapy to surgery alone. It found non-significant survival benefits of 0.92 (95% CI: 0.81–1.04) and 0.96 (95% CI: 0.75–1.22) for neoadjuvant and adjuvant chemotherapy respectively [8]. However, this study has been criticized for having low statistical power [9]. Additionally, 465 (75%) of the patients in the study have a clinical stage of IIA (T2b, N0) or below. A 2009 meta-analysis by Lim et al. compared preoperative and postoperative administration using a cohort of over 10,000 participants extracted from 32 randomized trials. This analysis reported hazards ratios of 0.81 (0.68–0.97) for preoperative and 0.80 (95% CI: 0.74–0.87) for postoperative chemotherapy. They concluded that there was no significant difference between the two approaches [9]. However, this meta-analysis included all NSCLC stages, with 27 (84%) of the studies including stage I, for which chemotherapy is not a recommended treatment option. While current research suggests there is no survival difference between neoadjuvant and adjuvant chemotherapy, this conclusion is based on a very small body of evidence. Furthermore, no studies have directly investigated this comparison in a stage-specific manner. 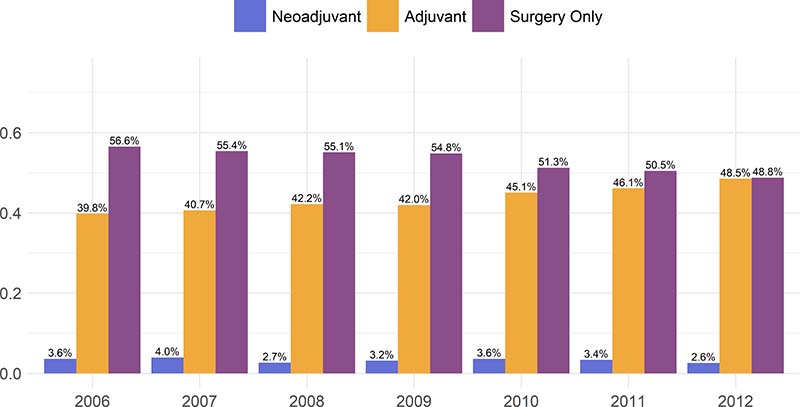 Predictors of neoadjuvant chemotherapy use

Table 2: Multivariable analysis, using the Cox proportional hazard model, of factors associated with receiving neoadjuvant chemotherapy in the National Cancer Data Base from 2006 to 2012 for stage II and III NSCLC

Timing of chemotherapy and survival outcomes in stage II NSCLC 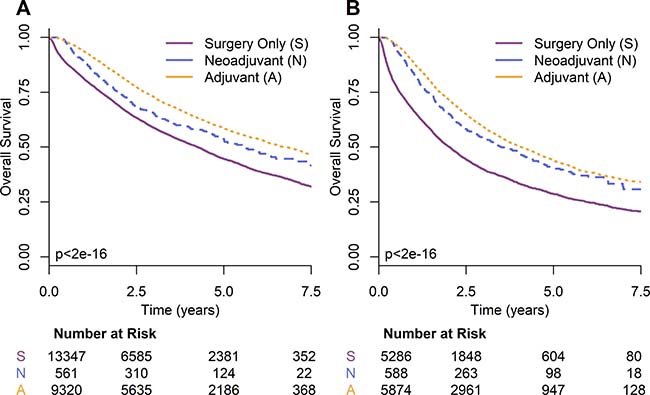 Figure 2: Kaplan-Meier survival curves by timing of chemotherapy for NSCLC (A) stage II and (B) stage III.

Table 3: Multivariable analysis, using the Cox proportional hazard model, for predictors of overall survival in stage II and III NSCLC from 2006 to 2012 in the NCDB

Propensity score matching on the adjuvant and neoadjuvant groups resulted in a cohort with 368 patients in each treatment group and an absolute standardized difference of 8.8e-3. Adjuvant chemotherapy was again found to provide a significant survival advantage over neoadjuvant chemotherapy (HR = 0.70; 95% CI: 0.54–0.90; p = 5.8e-3). Survival curves for stage II propensity score matched groups are shown in Figure 3C. Figure 3A shows survival curves for stage II propensity matched groups where the covariates of T and N stage shift are excluded. 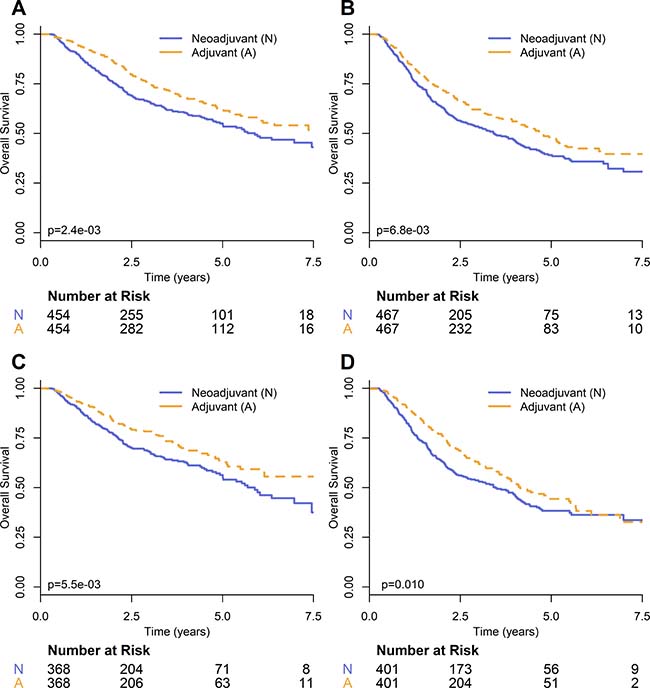 On analysis of the National Cancer Database, our study found a significant survival advantage for the use of adjuvant over neoadjuvant chemotherapy in the treatment of stage II and III NSCLC. This finding was significant on both multivariable and propensity score analysis with the propensity matched groups demonstrating a 10.2% and 9.2% increase in three-year survival rate for stages II and III respectively. This is the first retrospective analysis to show a survival advantage for the selection of adjuvant over neoadjuvant chemotherapy.

As shown in Figure 1, the use of neoadjuvant chemotherapy ranges from 2.6% to 4.0% with a non-negligible percentage of patients receiving neoadjuvant each year. While studies have attempted to compare adjuvant and neoadjuvant chemotherapy, the results have been inconclusive, and this is reflected by the lack of a discernable trend from 2006 to 2012. Interestingly, several factors associated with poor survival, such as being treated at a community treatment center or having no insurance were associated with a greater likelihood of receiving adjuvant chemotherapy. One potential explanation for this finding is that the type of provider procured by someone with private insurance might be more likely to decline the traditional selection of adjuvant therapy based on theoretical justifications for the use of neoadjuvant. In contrast, perhaps a provider at, for example, a community-treatment center would be more likely to stick with the standard-of-care rather than considering potential benefits of a less commonly used approach.

Our study is limited by nature of it being a retrospective study. While we used multivariable analysis and propensity score matching to help negate the effect of confounding factors, it is possible that there were variables not captured within the database that impacted both survival and treatment selection. For example, perhaps neoadjuvant chemotherapy is more often selected in cases of borderline resectability to shrink the primary before surgery. Decisions on treatment plans depend heavily on clinical judgement and our dataset is unable to account for situations in which the provider considers the case more severe than our metrics can capture. Additionally, the NCDB only includes the number of chemotherapeutic agents administered but does not include information on the specific type of agents. Although clinical trials showed no significant survival difference among different chemotherapy regimens [10], different chemotherapy regimens may be a possible source of confounding bias that we could not capture in our analysis. It is also important to note that the NCDB does not record whether the cause of death is disease-related. Another factor that could have influenced our results is the effect of neoadjuvant chemotherapy on down-staging. It is possible that preoperative chemotherapy could have sufficiently shrunk tumor-size such that pathologic-staging information would reflect a lower-stage than the actual initial disease. We attempted to account for this factor by estimating the degree of downstaging by taking the difference between the pathologic and clinical staging, and using this as a covariate for propensity score matching. However, while this provides a reasonable estimate of downstaging, the information contained in the NCDB dataset does not allow for a more precise determination.

The National Cancer Database (NCDB) collects data from more than 1500 facilities in North America, and between 1985 and 2005 was estimated to have acquired data on over 80% of new lung cancer diagnoses [11]. We queried the NCDB for all stage II and III NSCLC lung cancer patients from 2006 to 2012. We did not include patient data recorded prior to 2006 as it did not provide information on the timing of chemotherapy. Patients were excluded if the use of surgery, chemotherapy, or radiotherapy was unknown, if the timing of chemotherapy was unknown, or if both adjuvant and neoadjuvant chemotherapy was administered. Patients with positive surgical margins, or unknown margin status were also excluded. Additionally, all patients who received radiotherapy were excluded.

Staging information is provided in the NCDB consistent with the American Joint Committee on Cancer (AJCC) 6th or 7th edition depending on the year of collection. However, the 8th edition is both more applicable to current practice and has been shown to be a more reliable predictor of prognosis [12]. Therefore, the AJCC 8th edition stage [12] was used in the analysis. To account for the potential confounding factor of staging changes due to neoadjuvant chemotherapy, we defined stage shift variables by taking the difference between clinical stage and pathological stage. T stage shift was defined by taking clinical T stage and subtracting pathological T stage. Similarly, N stage shift was calculated by taking clinical N stage and subtracting pathological N stage. These stage shift variables were used in propensity score analysis to account for potential confounding.

Chi-square test was used to test if treatment selection was different between different stages. Multivariable logistic regression was used to identify predictors of neoadjuvant chemotherapy usage.

Overall survival (OS) was the primary outcome of interest and defined as the time from diagnosis till death or last follow-up. The median follow-up time was computed using the reverse Kaplan-Meier method [13]. Survival curves were drawn using the Kaplan-Meier method and compared using the log-rank test [14]. Multivariable Cox proportional hazard model was used to evaluate the impact of prognostic predictors. To further control for confounding variables, propensity scores were calculated using multiple logistic regression including the following covariates: age, sex, race, income, type of insurance, facility type, histology, number of chemotherapy agents, and Charlson-Deyo score. The Charlson-Deyo score is a variable which captures the number and severity of comorbid conditions [15]. Based on propensity scores, different treatment groups were then matched using a nearest neighbor matching algorithm. The matched groups were considered acceptable if they had a mean absolute standardized difference of propensity scores less than 0.10 [16]. Further propensity score analysis was conducted with the additional covariates of T stage shift, and N stage shift.

All analyses were performed using R software, version 3.3.2. Packages “survival”, version 2.40-1, “MatchIt”, version 2.4-21, and “ggplot2”, version 2.2.1. The level of significance was set at 0.05, and all p-values were two-sided. This study was approved by the University of Texas Southwestern Institutional Review Board (IRB).