Association of PDCD6 polymorphisms with the risk of cancer: Evidence from a meta-analysis

5Department of Molecular Biology, School of Pharmacy with the Division of Laboratory Medicine in Sosnowiec, Medical University of Silesia in Katowice, Katowice, Poland

Cancer is a major public health burden, with an estimate of 14.1 million new cancer cases and 8.2 million cancer-related deaths occurred globally in 2012 [3]. In 2018, 1,735,350 new cancer cases and 609,640 cancer deaths are projected to occur in the United States. It has been reported that over the past decade, the rate of incidence (2005–2014) was nearly linear and without any changes in women, and declined by approximately 2% annually in men, while the rate of cancer death (2006–2015) was declined by about 1.5% annually in both men and women [32]. It is estimated that in 2017, 1,688,780 new cancer cases was diagnosed and 600,920 cancer deaths are estimated to occurred in the United States [31]. Although significant progress has been reached in understanding the mechanism and pathogenesis of different types of cancers, the exact etiology is still not completely understood. Growing evidences indicate that cancer is a multifactorial disease caused by genetic background and environmental interactions [4, 8].

Apoptosis, also known as programmed cell death, is involved in physiological cell death [11]. Many factors contribute in the apoptotic pathway, including caspases, pro- and anti-apoptotic Bcl2 family members, and mitochondrial pro-apoptotic proteins [5, 6, 22]. Defects in the apoptosis machinery may lead to serious disease including cancer, autoimmune disease and drug resistance in tumors [5, 7, 26].

Programmed cell death protein 6 (PDCD6), located on chromosome 5p15.33 contains 43351 bp, is also known as apoptosis-linked gene-2 (ALG-2). PDCD6 gene encodes a 22 kDa calcium-binding protein comprising five serially repetitive EF-hand structures. This protein is one of the prototypic members of the penta-EF-hand protein family. Initially, PDCD6 was considered as a pro-apoptotic protein contributing to T-cell receptor-, Fas-, and glucocorticoid- induced programmed cell death [30, 12], as well as endoplasmic reticulum stress induced apoptosis during organ formation [25, 18]. In recent years, some PDCD6-interacting proteins have been identified, including Peflin [14], Alix [21], Fas [12] and Annexin XI [28]. However none of them regulates PDCD6 activity, and such factor yet avaits to be identified. Alix and PDCD6 interaction with pro-caspase-8 potentiated cell death induction via tumor necrosis factor receptor 1 (TNFR1) [19]. Several studies have examined the expression of PDCD6 in clinical tumor tissues or cell lines, and found that PDCD6 has opposing effects in different tumors. PDCD6 expression was upregulated in tumor tissue samples from lung, breast, colon cancer, and ovarian cancer, which suggested that PDCD6 might be involved in maintenance of cellular viability [15, 10, 17, 33, 24]. In contrast, decreased PDCD6 expression was detected in non-small cell lung cancer (NSCLC), gastric cancer and HeLa cells [38, 40].

Recently, it has been shown that that miR-124-3p attenuated tumor metastasis by inhibiting PDCD6 expression, and that the miR-124-3p/PDCD6 signaling axis could potentially be a therapeutic target for patients with advanced breast cancer [43]. Another study showed that the over-expression of miR-124 suppressed PDCD6 expression, inhibited cell proliferation, migration and invasion, and induced apoptosis in SKOV3 and OCVAR3 cells in vitro [41]. Furthermorem it has been proposed that miR-183 may function as an oncogene that may increase childhood acute myeloid leukemia (AML) cell proliferation by targeting PDCD6 [37].

Figure 1: Map of the human PDCD6 gene with polymorphisms positions indicated. Exons 1–6 are numbered and represented by black boxes. Both of the rs3756712 T>G and rs4957014 T>G variants positioned in intron region. 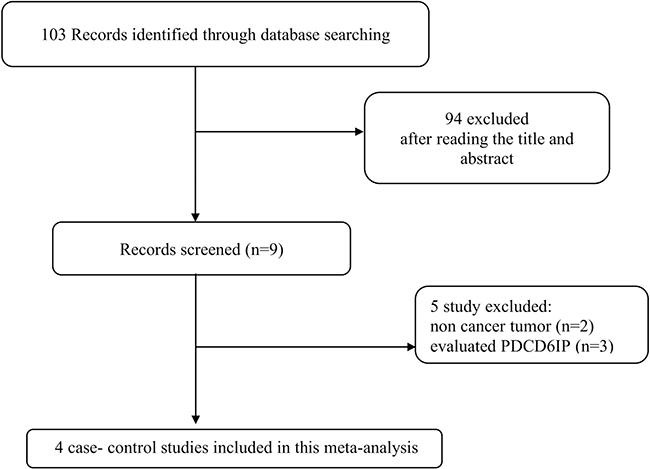 Figure 2: Flow chart of literature screening and selection in the meta-analysis.

Extraction of the data has been conducted by two independent scientists. The data were collected from each study including the first author’s name, publication year, ethnicity of participants, the sample size, and the genotype and allele frequencies of cases and controls.

Meta-analysis was carried out using Revman 5.3 software, which was provided by the Cochrane Collaboration (Version 5.3. Copenhagen: The Nordic Cochrane Centre, the Cochrane Collaboration, 2014) and STATA 14.1 software (Stata Corporation, College Station, TX, USA). All of the data in the studies are dichotomous data, which has been expressed as odds ratios (ORs) with 95% confidence intervals (CIs) to assess the association between the polymorphisms and cancer. Hardy-Weinberg equilibrium (HWE) for each study was determined by the chi-square tests of control group data. Odds ratios (ORs) and 95% confidence intervals (CIs) were pooled to evaluate the association between the polymorphisms and risk of cancer. For each polymorphism the ORs were calculated for dominant, codominant, recessive, over-dominant, and allele genetic models. Heterogeneity also assessed using the I2 statistic, interpreted as the proportion of the total variation contributed by inter-study variation, and the Cochran chi-square Q-test, with a significance level of P < 0.10 and I2 > 50%. When significant heterogeneity values were returned, the random-effects model (the DerSimonian and Laird method) was used to estimate pooled ORs. Otherwise, the fixed-effects model (the Mantel-Haenszel method) was employed. The significance of the pooled OR was assessed by the Z-test, and P < 0.05 was considered to be statistically significant.

Publication bias was evaluated by funnel plot. The degree of asymmetry was measured using Egger’s linear regression test; p < 0.05 was considered significant publication bias [2]. The characteristics and relevant data of the included studies are shown in Table 1. The genotypes of PDCD6 polymorphisms in controls were all in accordance with HWE (P > 0.05) except for Zhou et al. [45] (Table 1).

Table 1: Distribution information of genotypes and alleles of all studies included in the meta-analysis for rs3756712 T>G and rs4957014 T>G polymorphisms of programmed cell death 6 (PDCD6) 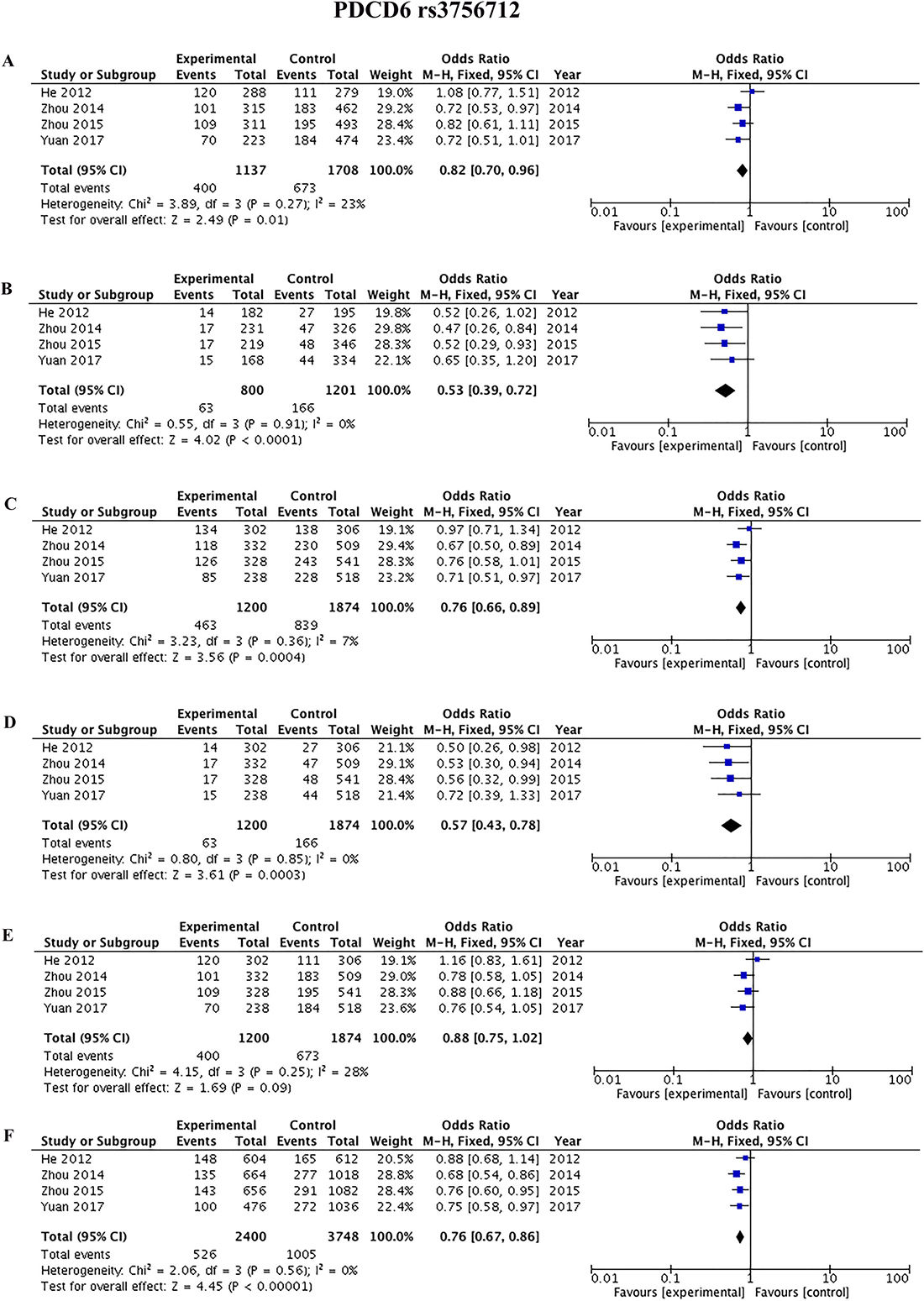 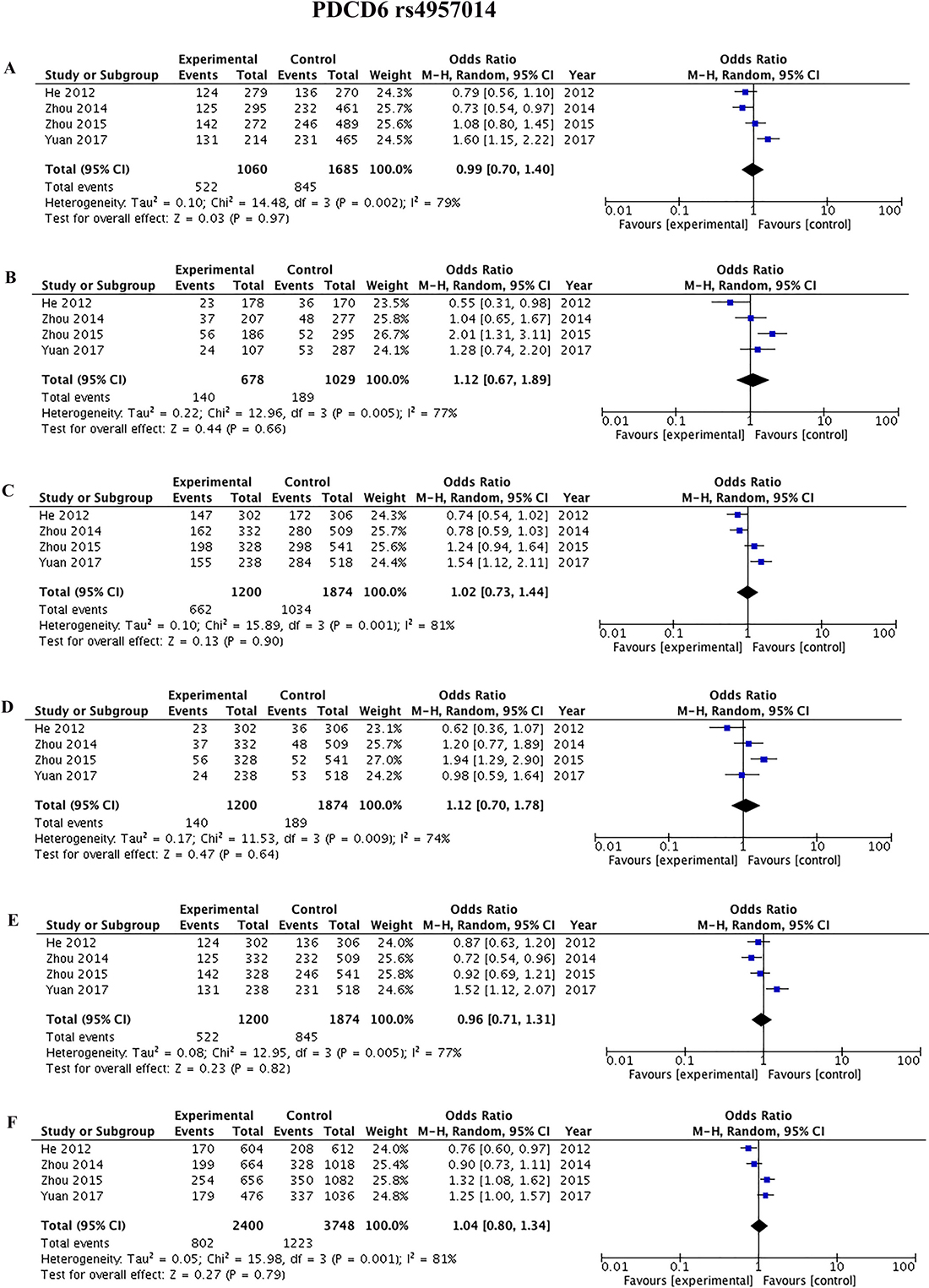 Heterogeneity of the included studies concerning each polymorphism is shown in Table 2. A funnel plot was generated as a visual aid to detect risk of publication bias (Figures 5 and 6). Regarding rs3756712 variant, Egger’s linear regression analysis suggested no publication bias for this meta-analysis of the codominant, dominant, recessive, overdominanat and allele model (all P-values for bias > 0.05). For rs4957014 polymorphism, the findings indicated that the publication bias exist only for recessive model (Table 2). 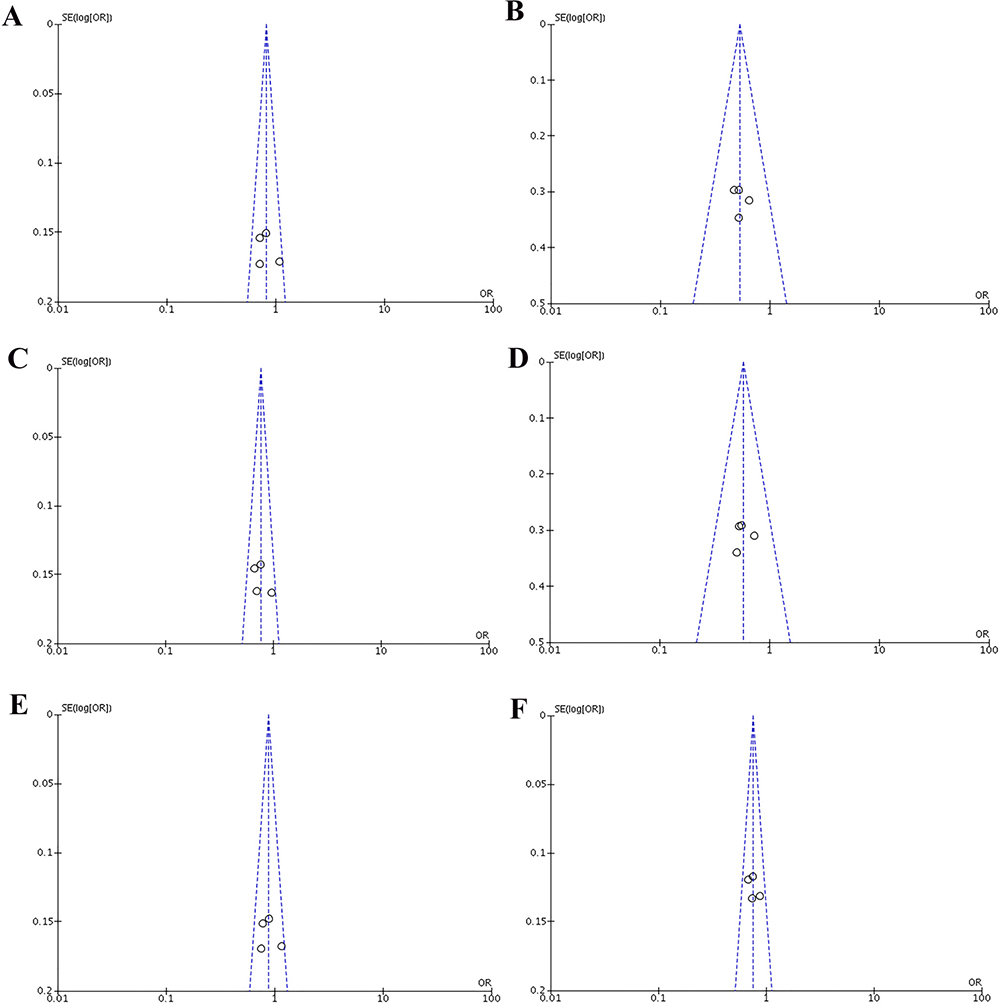 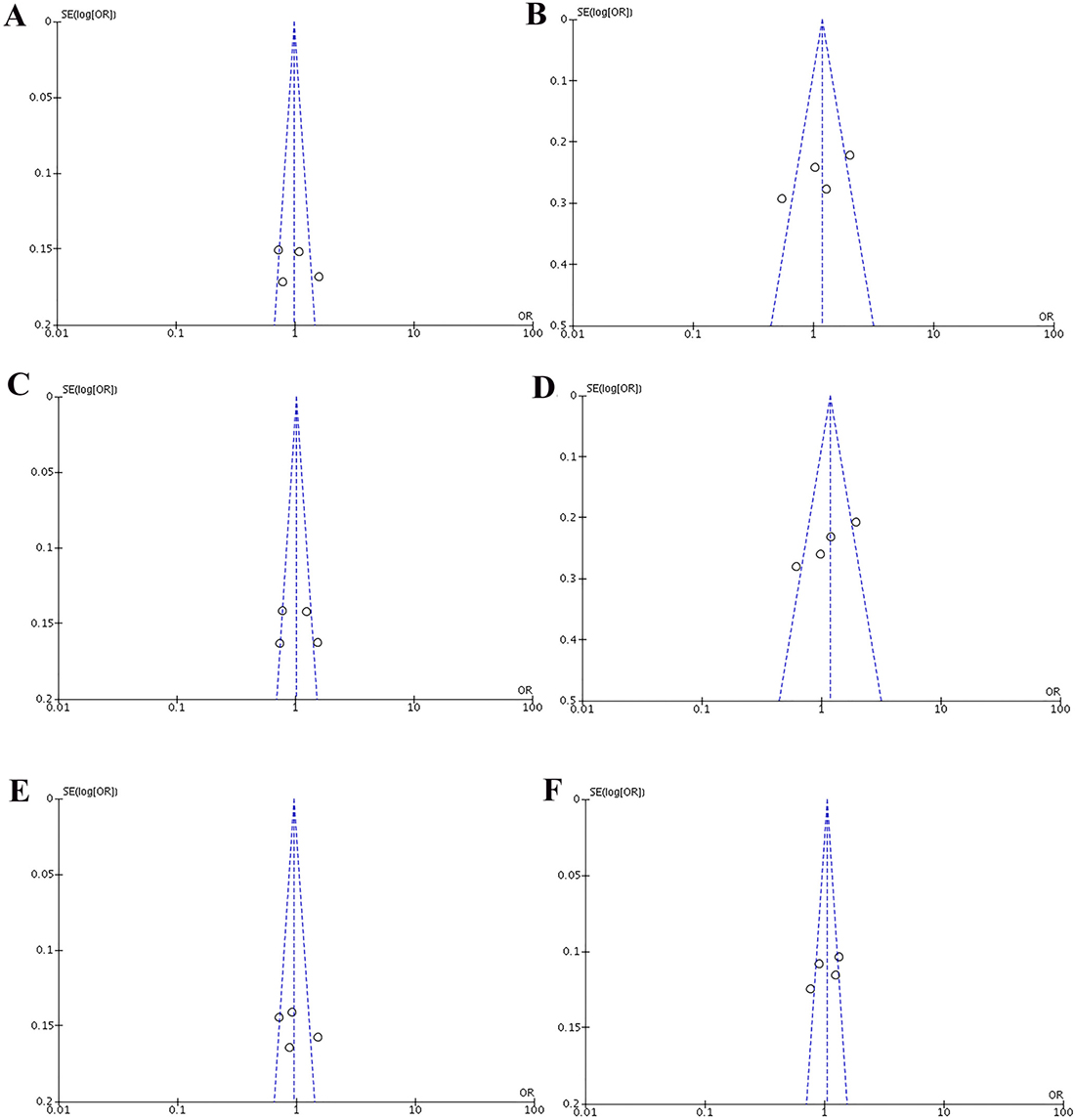 Sensitivity analysis was done using the method of eliminating studies one by one to verify whether our results were influenced by each included study. For rs3756712 variant, the pooled ORs were not considerably altered except in codominant heterozygous model (TG vs TT) and overdominant (TG vs TT+GG) model (Figure 7). Regarding rs4957014 variant, the pooled ORs altered only in overdominant model (Figure 8). Therefore, the results confirmed that the present meta-analysis was relatively stable and reliable. 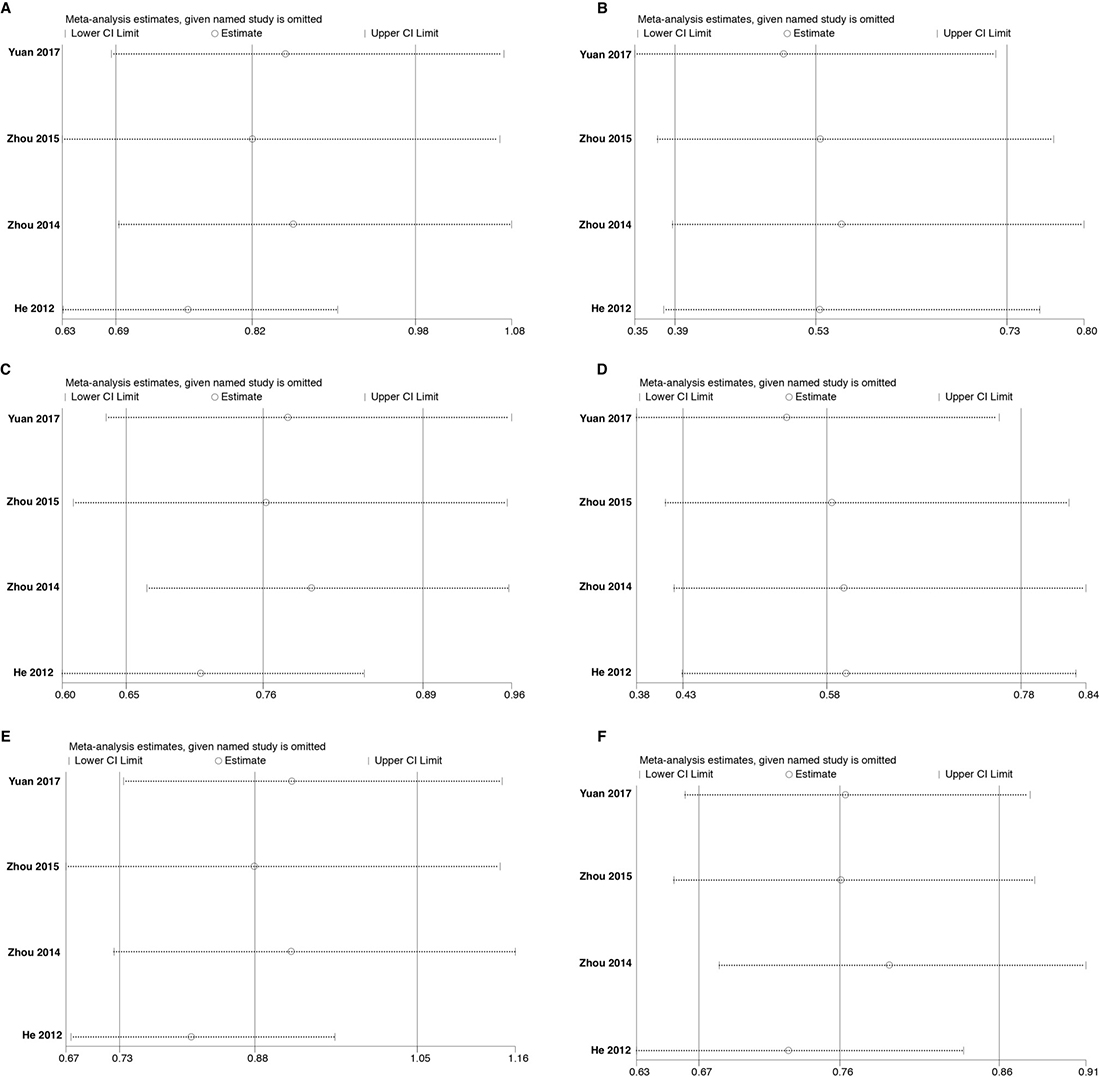 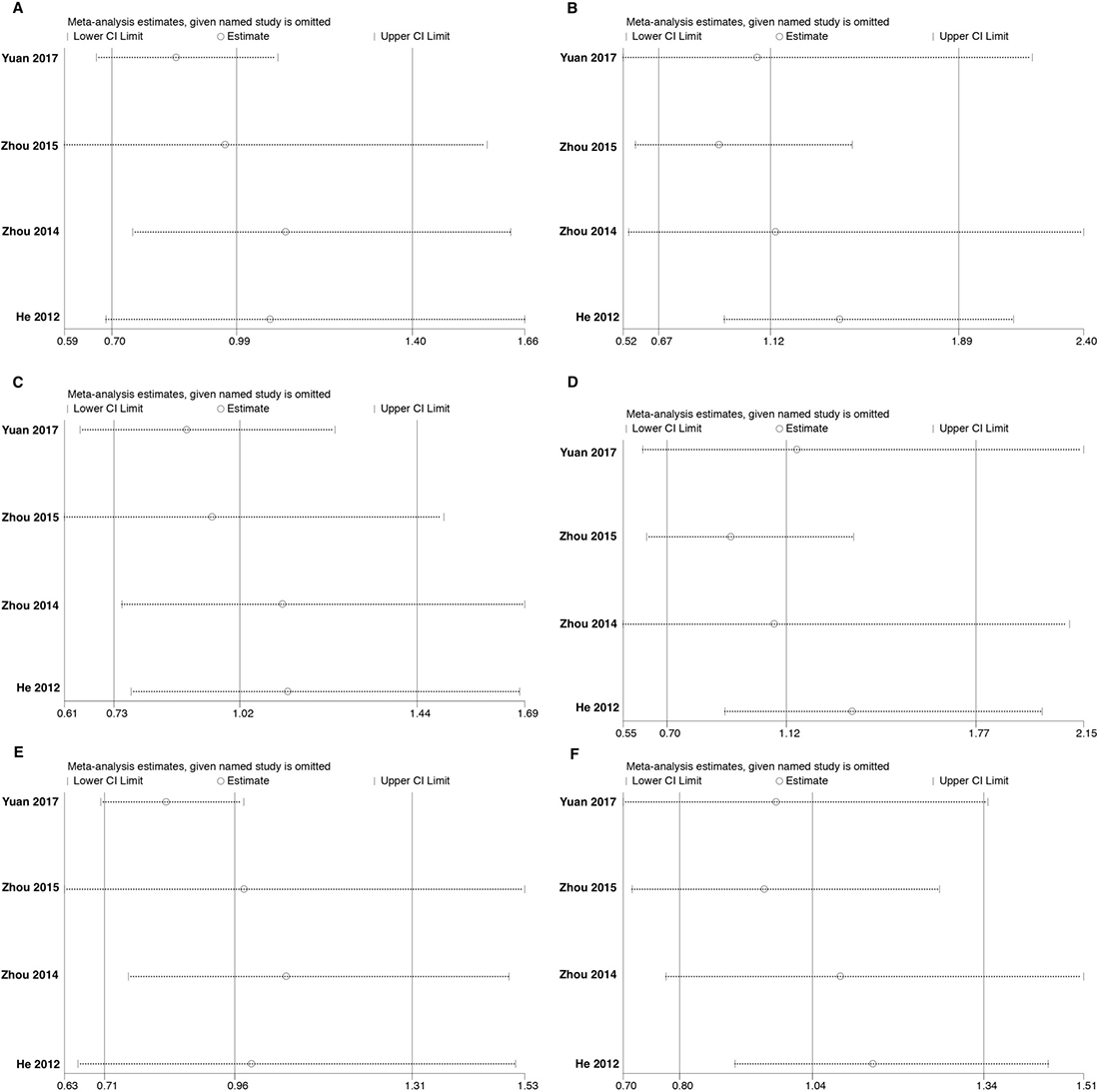 PDCD6, a proapoptotic protein, is a Ca2+ binding protein of the EF-hand type belonging to the subfamily of penta-EF-hand (PEF) protein that is required for the induction of apoptosis by a variety of stimuli [35, 20]. Binding of Ca2+ to PDCD6 induces a conformational change [34], which enables the interaction with several proteins, including ALG-2-interacting protein X (ALIX) [36], Sec31A [39, 16], and annexin A11 [28, 29]. Several lines of evidence suggest that interacting partner of PDCD6 is ALIX/AIP1, an adaptor protein, which has been implicated in apoptotic signaling [23, 13].

Due to contrasting findings about PDCD6 polymorphism in certain types of cancers, the present meta-analysis was performed to evaluate the impact of two SNPs of PDCD6 on cancer risk. To our knowledge, this is the first meta-analysis evaluating the impact of PDCD6 polymorphisms on cancer. The attained results suggest that the PDCD6 rs3756712 T>G polymorphism significantly decreased the risk of cancer under codominant, dominant, recessive, and allele genetic model. The findings did not support an association between rs4957014 T>G polymorphism of PDCD6 and cancer risk.

In conclusion, to our knowledge, this fist the present study suggested that there is an association between the PDCD6 rs3756712 T>G polymorphism and cancer. The rs3756712 T>G variant may be a potential marker for cancer. Further well-designed case-control studies with a larger sample size and different ethnicities should be done to confirm the findings.