Evaluation of appropriate follow-up after curative surgery for patients with colorectal cancer using time to recurrence and survival after recurrence: a retrospective multicenter study

Background: The follow-up schedule for colorectal cancer patients after curative surgery is inconsistent among the guidelines. Evaluation of time to recurrence (TTR) and survival after recurrence (SAR) may provide evidence for appropriate follow-up.

Methods: We assessed 3039 colon cancer (CC) and 1953 rectal cancer (RC) patients who underwent curative surgery between 2007 and 2008. We evaluated the pre- and post-recurrent clinicopathological factors associated with TTR and SAR in each stage of CC and RC.

However, these surveillances are not strictly categorized by risk factors other than clinical stage. Information on time to recurrence (TTR) and survival after recurrence (SAR) may help to determine the appropriate follow-up schedule, and has previously been used to evaluate the usefulness of intensive follow-up in clinical trials and meta-analysis [3, 5, 7, 8].

In this study, we evaluated the clinicopathological factors predicting TTR and SAR in patients with colon cancer (CC) or rectal cancer (RC) during intensive follow-up after curative resection, to determine the factors influencing the appropriate follow-up schedule.

Differences in clinicopathological factors between CC and RC

Factors associated with RFS and OS 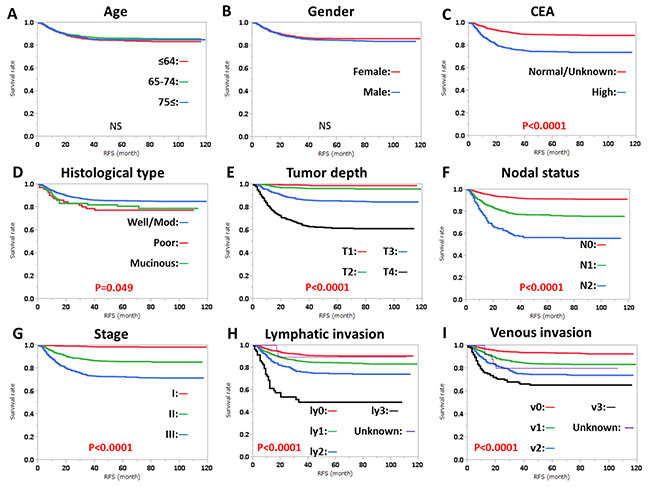 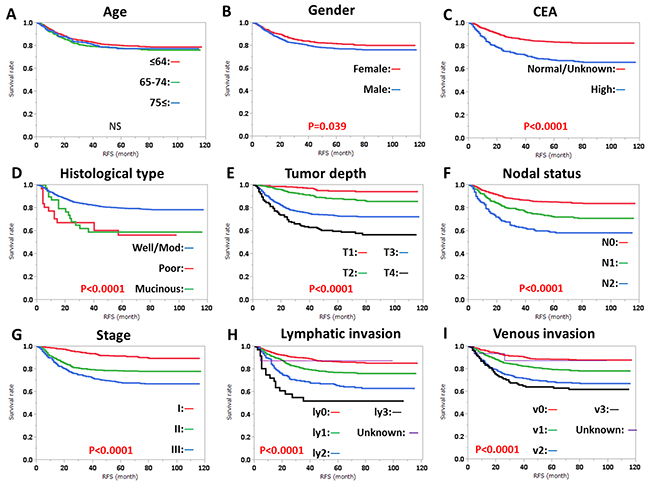 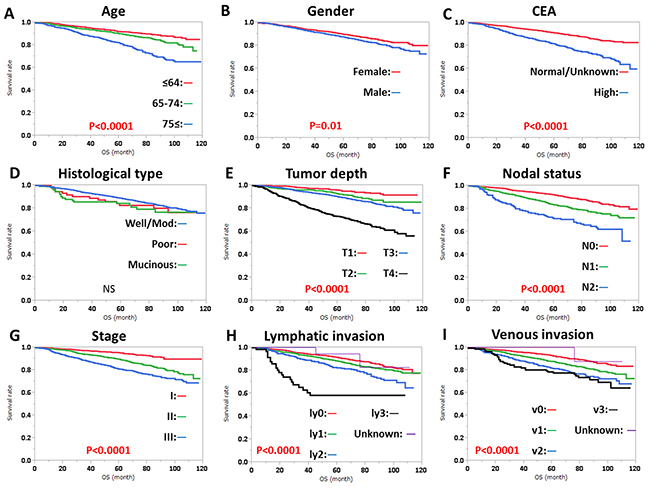 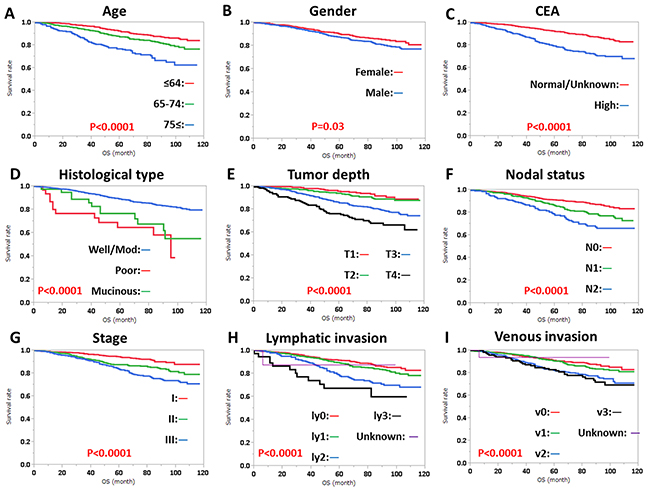 Clinicopathological factors in patients with recurrence

Age group, gender, tumor depth, nodal status, stage, TTR, type of recurrence, and sites of recurrence differed significantly between CC and RC in patients with recurrence (Table 2). The liver was the most common metastatic site in CC patients, followed by the lungs, peritoneum, and distant lymph nodes. In contrast, the lungs were the most common metastatic site in RC patients, followed by the liver, local recurrence, and distant lymph nodes. There was no significant difference in preoperative CEA, histological type, or treatment after recurrence according to tumor location.

Table 2: Clinicopathological factors of patients with recurrence by tumor location 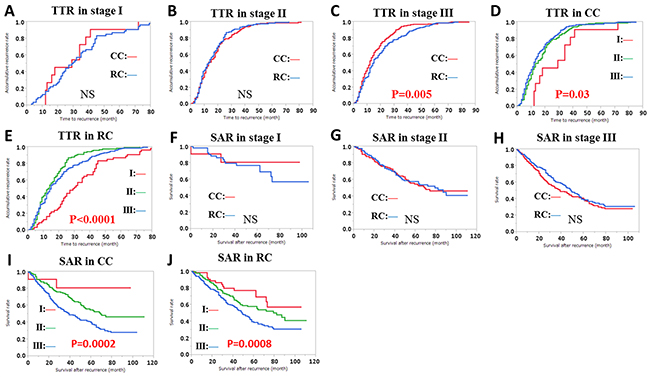 We further assessed TTR for CC and RC patients depending on stage, except for stage I, because there were fewer patients and longer TTR than for the other stages.

Table 3: Summary of associations between clinicopathological factors and TTR

Table 5: Summary of associations between clinicopathological factors and SAR

Among stage II and III patients, the accumulative recurrence rate was about 50% at 1 year, which was higher than in some previous reports, but similar to that in the FACS trial involving intensive surveillance, including CT [3, 7]. The 2- and 3-year recurrence rates in patients with stages II and III were 70%–80% and 80%–90%, respectively. These are similar to the previous data by Kobayashi et al and suggest that intensive surveillance with CEA checks every 3 months are necessary for at least 3 years, in contrast to the NCCN recommendation of 2 years [3, 14, 15].

TTR differed significantly between CC and RC in stage III patients. Predictors for TTR were different between CC and RC. In CC, patients with high preoperative CEA level and lymphovascular invasion could be followed-up as candidates for early recurrence. On the other hand, predictors in RC were venous invasion and liver metastasis. Therefore, follow-up in RC should include CT to evaluate liver metastasis.

Our study had several limitations. First, it was a retrospective study, and we had no genetic information, such as RAS mutation and microsatellite instability statuses, which are critical genetic markers for prognosis and treatment. KRAS mutation analysis has been available for clinical use in Japan since 2010. Moreover, universal screening for Lynch syndrome was performed in <10% of the hospitals specializing in CRC treatment in Japan [22]. Genetic information was therefore not considered for CRC treatment at the time of surgery in this study. Second, this study also lacked information on the usage of molecular-targeted drugs. Vascular endothelial growth factor and epidermal growth factor antibodies have been used clinically in Japan since 2007 and 2008, respectively. Patients with recurrence should thus have received these drugs for treatment after recurrence. Finally, this was a retrospective study with no rules about follow-up or treatment after surgery, or treatment after recurrence.

Although it seems advisable to detect recurrence as soon as possible to improve the chances of curative resection, the usefulness of intensive follow-up remains controversial. Furthermore, it is unclear if early detection of recurrence could increase the rate of curative treatment and improve survival. Our data demonstrated that short TTR was an independent prognostic factor for SAR in stage III RC patients, who should have received intensive follow-up. However, further prospective studies are needed to confirm our results. Genetic assessment is indispensable in the era of molecular-targeted therapy.

This retrospective multicenter study was conducted by the Japanese Study Group for Postoperative Follow-up of Colorectal Cancer (JFUP-CRC). Clinical data were collected for CRC patients who underwent curative surgery at 22 hospitals in Japan between 2007 and 2008. The study was approved by the institutional review board or ethics committee at each hospital and was performed according to the Declaration of Helsinki and Ethical Guidelines for Clinical Research. All patients provided written informed consent. The JFUP-CRC office pooled and prepared the data available for clinical study, as described in the 7th edition of the Japanese Classification of Colorectal Carcinoma [23]. Lymphatic (ly) or venous (v) invasion was classified according to the degree of invasion, as follows: no invasion (ly0/v0), minimal invasion (ly1/v1), moderate invasion (ly2/v2), or severe invasion (ly3/v3). A total of 4992 CRC patients who underwent curative resection in 2007 and 2008, without preoperative chemotherapy/radiotherapy, hereditary CRC, lateral lymph node metastasis, or colitic cancer, were considered suitable for assessment. These patients usually received follow-up with CEA tests every 3 months and CT every 6 months for 3 years, and then CEA every 6 months and CT every 12 months for 3–5 years. The median follow-up time was 72 months in all patients and 60 months in patients with recurrence.

Differences in clinicopathological factors according to tumor location (CC or RC) were analyzed for all patients and for patients with recurrence. Factors associated with recurrence were assessed using χ2 tests.

The influences of clinicopathological factors on relapse-free survival (RFS) and overall survival (OS) in all patients, and TTR and SAR in patients with recurrence were assessed using log-rank tests. Prognostic factors associated with TTR and SAR were subjected to multivariate analyses using a Cox proportional hazard model or logistic analysis. A P value of <0.05 was considered significant for all analyses.

We also thank Editage for editing the English text of a draft of this manuscript.

This study was approved by the Central Institutional Review board (Tokyo Medical and Dental University) and local ethical committee. Written informed consent was obtained from all patients.

The datasets used and analyzed during this study are available from the corresponding author on reasonable request under permission of JFUP-CRC.